Memories of France on a plate. My recipe for a spaghetti in butter, parsley and garlic sauce with duck sausage

It's not that I don't like to shop while travelling. I love to buy food stuff. Or curios which remind me of restaurants and meals that I ate on the trip.

I like to carry back taste memories. Some of which I try to recreate in our kitchen at the end of a holiday.

That's the story behind the dinner I cooked at home the other day soon after we returned from our French trip.

Well you get pasta in various European countries too. I have seen it across Spain and in Prague too apart from in Italy of course.

Every cafe and Bistro that we went to in France, including the French ones, had at least one pasta dish on the menu. Tagliatelle, spaghetti and linguine seemed most popular and there was the odd penne dish too. I had a mind blowing linguine with clams at the Bobo Bistro in Cannes. As Michel, my chatty cabby from the Nice airport said, "Cannes is close to Italy and there is a fair bit of Italian influence on the food there.""

Michel loves Chinese and Indian food the most followed by Italian.

"I don't like French food," he told me with a smile.

In Paris, I had the classic French dish, escargots or snails. I tried this in a restaurant called A La Pomponnette and loved it. The owners of the restaurant didn't speak much English. However, a friendly French couple sitting across our table did and explained what went behind the dishes we ate.

I had loved the flavours of the marinade in which the escargot was grilled. Parsley, garlic and butter explained my co-diner. That sounded simple enough and I thought of using the combination in some form  after coming back to Mumbai. A pasta seemed a good answer. Spaghetti, since the sauce would be light and not creamy or cheesy.

Read: Dinner in A La Pomponnette

It would have made sense to use seafood in memory of the snails that I had the original dish with. However, I had bought sausages from a charcuterie in Nice. Duck, pork and wild boar ones. I decided to use the duck sausage for the pasta.

The dish was pretty quick to put together. K was happy with the way I turned out. So was I.

Unlike K, who avoided the snails in paris, I had eaten the original dish. I knew that the escargot was more buttery and garlicky than my pasta.

Well, one can analyse till the cows come home however I thought that I will share the recipe with you since it turned out well.

Talking of cows, I brought back some lovely cow's milk cheese from the same charcuterie.


2. 100 g duck sausage.  You could use pepperoni too. Or some prawns or mussels. If vegetarian, some good mushrooms
3. 2 handfuls of fresh parsley, washed properly
4. 6 peeled cloves of garlic
5. 30 g or 1 tablespoon of salted butter. The French would use more but they walk a lot more than us and climb million stairs for the metro in Paris
6. Salt. Table salt or sea salt. 1/2 teaspoon
7. 1 teaspoon extra virgin olive oil 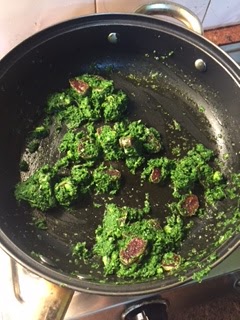 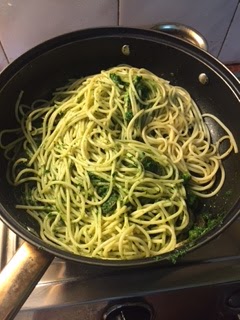 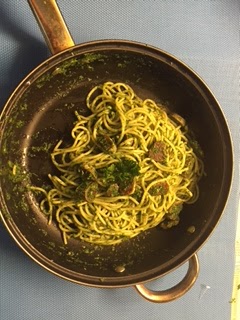 Stat warning: This is a dish that I cooked up and it makes no claim to being an authentic French recipe by any means
Conti Europe France iPhone 6 pics pasta Recipes travel