I was in Soam, one of my favourite restaurants in Mumbai, a couple of evenings back.

The occasion was the launch of the fifth edition of a book called 'Falahari Rajbhog' written by Mrs Kamlini Raja. It is a book written in Gujarati. The book consists of a collection of vegetarian recipes that can be used to cook farali fare in the month of Shravan which is on now according to the Hindu calendar. 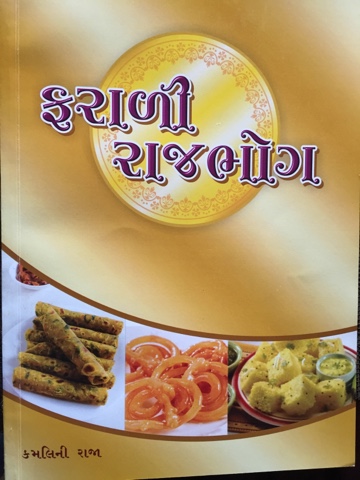 What is farali food? From what I understood from food writer Rushina Munshaw Ghildayal's talk that evening with Mrs Raja, it is food eaten by certain communities such as the Gujaratis and Maharashtrians during Shravan month from the Hindu calendar which falls in the rainy season. The food is vegetarian and there are restrictions in terms of not using grains and cereals and certain vegetables. It is referred to as 'fasting food', which to the outsider sounds like an oxymoron. Rushina tells me that that the concept possibly came up to help the natural eco-system replenish itself during the rainy season. It comes from the words fal (fruits) and ahar (nutrition) which combine to form the word 'falahar' and represents ancient Indian culinary knowledge and expertise. Not a subject that I am a big expert on but definitely something I would like to learn more about including whether other Indian communities observe Shravan.

What interested me most that evening was the author of the book. An 89 year old lady named Kamlini Raja who wrote the first edition of the book in 1989. She is a lady who is full of spunk. She spoke to Rushina during the launch event about her book. She said that people often couldn't figure out what to cook for such a long period with so many restrictions. At times, she commented with a grin, they would have to reach out for a Digene (digestive med) because of the heavy dishes prepared during the season. She said that she has tried to put together dishes that are light and tasty and versatile too so that the modern generation doesn't lose out on the Indian traditional culinary wisdom. "You can even make pizzas using farali ingredients", said Mrs Raja, knowing that even time-tested knowledge has to be kept contemporary and has to evolve with times.

Pinky Dixit Chandran, who owns Soam, said that she didn't know what to prepare during Shravan in her restaurant. She then came across Mrs Raja's book ten years back and introduced recipes from it in the menu at Soam. While the two had often spoken on the phone over the years,  she had apparently met Mrs Raja for the first time very recently. Mrs Raja's book is now available for sale at Soam. It is not there in English yet though but for those who can read Gujarati, this is a good source on recipes which use traditional Indian ingredients and super foods such as Amaranth and Ragi and millets and so on. Potatoes are allowed apparently and also yams.
I don't know how to read Gujarati but I plan to give my copy to K's mama (maternal uncle) who does and who is a rare vegetarian Parsi.

For food which is Spartan, the farali dishes that we ate after the launch at Soam were pretty delicious.

The puri of the sev puri was made with millets and not flour and was quite  tasty and had a nice crunch to it. There was a fasting missal which is made with sabudana or sago beans instead of the usual pulses. This dish is pretty common in Maharashtrian vegetarian restaurants too and is quite pleasant to eat and is not spicy or oily. I also loves the tikki made with purple yam and paneer which had a chhena-like soft consistency. The sweet made with dried fruit and desiccated coconut was not my cup of tea as I don't like coconut based desserts.

The highlight of the evening for me was the spirit of the 89 year old Kamlini Raja. This Gujarati lady spoke in perfect English to Rushina with a lot of authority, passion and wit about farali food. Do keep in mind that it was not that common for women in her (Mrs Raja's) generation to have had an English education.

Mrs Raja then spoke about Pinky and her contribution in keeping Mrs Raja's motivation going by introducing recipes from the book at Soam. This time Mrs Raja spoke in Hindi.

I shot a little phone video with Mrs Raja. When we finished I told her I am from Calcutta. She then proceeded to speak  to me in unaccented and fluent Bengali. She had apparently done her higher education in Calcutta!

Watch: Mrs Raja talk to me about her book

Her first book, Nayi Chetana, was written in 1965. The Indo-China war was was on then. The then Prime Minister, Lal Bahadur Shastri, had requested people to conserve grains. So Kamlini Raja came up with her book which featured recipes that didn't use any grains or cereals.

Coming back to the evening at Soam, it was indeed a joyous occasion where Mrs Raja was joined and supported by her daughter in law and daughter and friends and family.

I was not surprised by the crowds that she drew because her spirit even at 89 is so youthful.

I am in search of stories of hope these days to share with you and doubt if the stories can get any better than that of Mrs Kamlini Raja, a true rockstar.