The happiest stories are brewed over time...our Dal Bukhara story 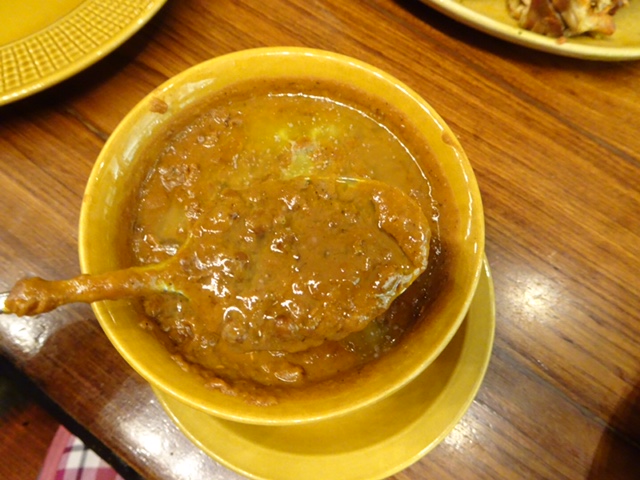 I was quite pleased to see a Facebook post and tweet yesterday which said that the Bukhara Restaurant at the ITC Maurya had featured in the 'Best restaurants in the world' list put up by Conde Naste Traveller, USA.

Lists are subjective in my opinion and a function of the jury's exposure and tastes and opinions on them can vary. However, the Bukhara does evoke fond memories for us. Especially due to one dish.

Not the raan or the tandoori as much as for the dal!

The iconic Dal Bukhara of the Bukhara reminds me of the early days of our marriage, in the early 2000s, when we were broke after eating out every night while courting, and couldn’t afford to eat out much on our agency salaries once we were actually married!

One day, soon after we got married, I read about ITC Foods launching the Kitchens of India range of ready to eat food products from the ITC Hotel menus. This included the dal Bukhara.

I loved reading about food even then and had recently read about the dal Bukhara in another article in the papers. I don’t remember who had written the article and where I had read it. The article spoke about how the dal is slow cooked over night and is really regal and sought after. I was intrigued.

When I heard that it was available in the stores, I thought I must buy it for K.

Those days I thought of dals as mere side dishes and didn’t give them much importance. K though loved, and still loves, her pulses. So I thought I must get the Dal Bukhara for her. Plus it was a ‘black dal’, the sort of dals K loves.

I don’t think Mumbai had an ITC Hotel then. The Sea Rock had long shut down and the ITC Maratha hadn’t come up yet. Plus, given that going to restaurants itself was out of the question, a five star was beyond our dreams. So the question of eating at the Bukhara did not arise.

The introduction of the Dal Bukhara in a packet suddenly made an unattainable experience attainable. I picked the dal on the way home from the Khar Station market. It cost around 100 Rs which was quite a large sum then (2001-03). I think black daals in local restaurants such as Khane Khas cost around Rs 60 then.

I hadn’t told K that I was picking up the dal so it was a bit of a surprise for her. I don’t remember  if we had had a fight and whether this was a peace offering or whether something good had happened and we were celebrating it.

As I had hoped, she was thrilled to see the dal. I cut the pack the gingerly at dinner time. Poured out the contents into a microwave bowl and heated it and then divided it into two. For the princely 100 Rs, it was a rather small amount but boy did it taste royal!

It was creamy, buttery, rich, packed with flavour though not high on chilli heat or masala, very different from any dal we had ever tasted. The six spoons that we each had, fine I am exaggerating, did taste truly superb.

A few years later, our circumstances had improved a bit. We could afford going to eat out again! On special occasions we would save up and go to five star hotels to eat. We would spend very little on alcohol or desserts on these occasions and instead put in all the money on the food.

One of the first five star hotel restaurants that we went to was Dum Pukht at the ITC Maratha which had just come up then (mid 2000s). We went there for two things. The dal Bukhara. And the kakori kebabs which I had read about in Vir Sanghvi’s book, ‘Rude Food’. Kakori House hadn’t come up then so there were no ‘plebeian’ options to try this.

I booked us a table at the Maurya. The person taking the booking on the table asked me if it was a special occasion. I told them it was K’s birthday. Ot it could have been our anniversary. I am not absolutely sure as this happened more than a decade back. I didn’t blog then so I have no records of it.

We went to the hotel and figured out the dal and the kebab came from two different restaurants. The dal Bukhara from the Peshawari (which is what Bukhara is called in ITC Hotels outside of the Maurya) and the kakori from Dum Pukht. So we went to Dum Pukht. Possibly because I wanted to have the biryani too which you got at the Dum Pukht.

I am pretty sure our meal was was the Dum Pukht as I remember it looking like a fine dining place versus the Peshawari which has this old school ‘Indian restaurant meets dhaba’ look.

Those were the days when they probably didn’t mind serving a dish from one restaurant at  another at ITC I am told and they got us the dal Bukhara at the Dum Pukht on my request, along with our kakori and the biryani.

We thoroughly enjoyed the dal which tasted way better when served fresh and not out of a packet. The kakori was phenomenal too and has remained a favourite of ours over the years.

Once we finished our meal, the lady at the reception of the restaurant, came to us with a smile bearing a cake. It was for the birthday/ anniversary she told us.

We were young and super overwhelmed at having a 5 star hotel cake on the house! We had half at the restaurant and packed the rest and had it in our supremely tiny apartment.

A few years later, I happened to be in Kolkata the day my mother retired. I wanted to take her out somewhere nice for dinner. To a five star. My former boss from IMRB Kolkata, and epicure, Josh suggested the ITC Sonar and I took her and my brother there.

I again wanted to have the kakori, dal and biryani combo and they made it available at the Dum Pukht. My mother, like a typical Bengali, wanted to know why we were wasting our money on a dish as mundane as a dal in a fancy, expensive place.

Once she had the dal, she too was held in the spell of the dal Bukhara.

Earlier this year I was invited over to the ITC Maurya in Delhi, as a food blogger, to experience the hotel. k joined me and our first meal was at the hallowed Bukhara and we finally had the dal Bukhara at THE Bukhara. It was worth the wait and we used our fingers to wipe clean the bowl of dal. We had a nice mix of kebabs and the raan on the side.

Then we went to the ITC Grand Central on the Parsi new year where K’s mama tasted the dal Bukhara for the first time as it was part of the buffet. Mama, is not a man given to effusive reactions when it comes to food, but he couldn’t stop praising the dal, “it’s the butter you see,” he exclaimed.

Later in the year we checked into the ITC Maratha for a stay-cation on K’s birthday. This was our third stay there as K is quite fond of the hotel. By this time they had stopped serving the dal Bukhara at the Dum Pukht even if people requested for it. So we went to the Peshawari on the night of K's birthday for the dal.

We kept our dinner simple. Dal Bukhara and mutton barra kebabs and rotis. A truly feel good dinner. The taste of the dal consistent over the years.


The evening was made even more special by Hitesh, from the front of staff, whose pride in working for the Peshawari was infectious.

I am sure the magic of slow cooking leads to a lot of the of the aura of the dal Bukhara.

Just as great memories are often built over time and cannot be rushed.

Here's wishing all the best to Team Bukhara and thanks for all the dal.