Coincidentally, this post was sparked off by another discussion that she and I had this morning on FB.

Apala shared an article on FB from The Hindu which spoke about how folks from the American, Chinese and Bangladeshi and other diplomatic missions in Kolkata were engaging with the Durga Pujas in Kolkata to connect better with the locals.

"Pujo diplomacy," is how Apala (I call her aunty in private) summed it up.

Her comment reminded me of a couple of incidents from my childhood in Kolkata from around 1981-82 when we had just moved into India.

Durga Pujo with my dad

One happened about the time when I wanted to invite a Pole, Robert, who was one of my closest friends in the Calcutta International School, to our house for a traditional meal. His dad worked in the Polish consulate and his elder brother was in our school too. My dad invited them, at my request, to our house during the Durga Pujas. Bought batik shirts for Robert, his brother and his dad and a batiksari for his mother. He had also arranged for special khichuri bhog (Durga Puja festive food) from the local puja to be served to them.

Then there was this other time when my dad came across a couple of foreigners looking lost in a Kolkata Durga Pujo. My dad, who used to take part in the pujo in London too, stepped in and began to explain the significance of the puja and used the Spanish bull fight as an analogy. He was not very religious but loved connecting with people across the world.

I was around 8 years old then. These are some of my last memories of my father before he passed away but they are they vivid.

My aunt, who was my dad's pet, loyally stepped and said that for my dad it wasn't 'diplomacy' but 'a genuine desire to embrace other cultures and make them understand us."

As I read her words early in the morning (9 am), I realised how much of my father's son I am, as that is exactly what I've tried to do over the years, including through my writing! 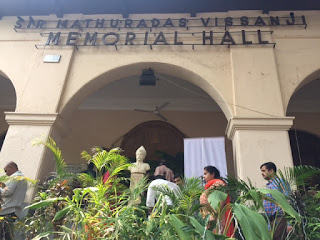 The morning's discussion came back to me when I dropped in at the Bombay Durga Bari Puja at the Tejpal Auditorium South Mumbai this afternoon.

I had gone with my mother, my mother in law and my aunt in law. The in laws are Parsi and this was their first visit to a Durga Pujo. However, they were the not the only other Parsis there as I spotted a couple of other Parsi ladies too.

We were there as guests of our friends Jayanta and Anita Basu who are globe-trotting Bengalis, now settled in Mumbai. They were a part of the same London Durga Pujo as my parents but possibly missed each other by a couple of years.

The Bombay Durga Bari Puja was started 87 years back and is the oldest running Durga Pujo (Bengali) in Mumbai.

When I heard this, I wondered about the sort of reception that they would have got in the beginning from the local Mumbaikars, who would have found this Bengali festival alien to them.

Well, the way Durga Pujos have mushroomed over the years in Mumbai has shown that the Bombay Durga Bari Pujo folks must have been good ambassadors in making the local Bengalis and their Pujas welcome in Mumbai. The Durga Bari folks moved to the Tejpal Auditorium in 1976 I am told. The hall is run by a Gujarati charitable trust and in deference to their sentiments, the Durga Bari Pujo does not have any non-veg food including in the stalls or in the bhog (which is usually veg in any case).

The pujo, is a very homely one, and doesn't have a commercial feel barring the odd sponsor's logo. There are hardly any stalls here selling stuff. The focus is on the pujo rituals and we gave anjali today.

The Goddess is done up in a very traditional style.


Bhog is a centre of this pujo too and everyone, who comes in, is fed hot and delicious food during lunch time, which is on the house. Funded, I guess, by the sponsors and organisers.

It's a very homely affair with all the boudis and mashimas (ladies) serving the food, while the men run around getting the food to them. It's like eating in someone's house. The kitchen could get chaotic at times. Today the khichuri got over after the first batch but not to worry as the cooks got down to make fresh khichuri, while the organisers smiled and requested folks to wait. And when the fresh and hot food was ready again, they apologised to those waiting, and began to serve again.

Another thoughtful touch were the tables kept for people to place the food on and eat which makes it so much easier for all.

The khichuri had a very home like feel to it and the badhakopi (cabbage) reminded me that I was planning to tell our cook Banu, once again, how to cook cabbage the Bengali way. This badhakopi spoke of home. The dessert of payesh and bonde made me miss my little 5 month niece, who had payesh for the first time recently and, according to my brother, loved it.

Ma Durga would have approved of it I am sure.

Here's a quick phone video that I did at the Durga Bari Pujo and some more pics.


Bhog pictures from Gurgaon sent by my brother 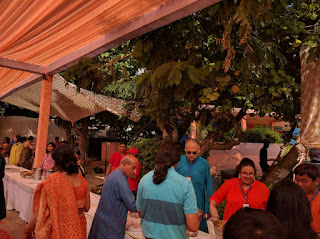 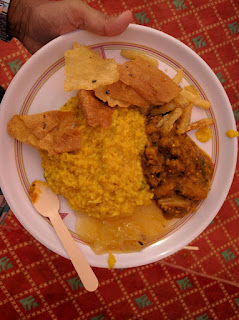