Note: I am not Gujarati so this is an outsider's point of view

Exploring my greener side

I don’t know whether I owe this to food blogging or to age, but over the years I’ve become more open to exploring vegetarian food and in the process have come across some stuff that I really like.


Do these dishes give the same pleasure as a good steak or grilled foie or a mutton roll would? Perhaps not. But, as I grow older, I find that vegetarian food taxes my digestion less and helps me stay light.
The one restaurant that I really like for vegetarian food in Mumbai is Soam which is located opposite the Babulnath temple in South Mumbai. They serve a variety of Gujarati dishes here.

Unlike the famous thali places of Mumbai, that serve a mix of Gujarati and Rajasthani vegetarian food with the odd spring roll and butter paneer thrown in, the fare at Soam is offered a la carte. I have never really taken to the thali format of eating where multiple tiny bowls are plonked in front of you and where refills are offered before you can catch your breath. I prefer to have fewer dishes on my table and don’t mind one dish meals actually. Which is why, though thalis have many loyalists, I rarely speak about thali joints myself.

I went to Soam recently with Seema and Amreen who run the Bombay Street Food restaurant in Toronto. They are Kathiawadi Memons and were keen to rekindle food memories of their ancestors which is why we went to Soam .

Soam has a winter menu on offer right now and I was keen to try that myself. Folks like Sangeeta Khanna have instilled the desire to eat seasonal in me and I am trying to do so to the extent possible.

We tried three dishes in Soam that Gujaratis apparently love in winter.

We had the most famous Gujarati winter dish of course, Undhiyu/ oondhia. This is a slow cooked dish made with a number of winter vegetables such as purple yam, brinjal, plantains, unripe banana, peas and green beans and a dumpling called muthia (ingredients could vary). The final dish looks primarily green in colour in the versions that I have eaten. Core to the flavour of the dish is the oil it is cooked in and spices infused into it. I am told that each part of Gujarat has its own version of undhiyu. The folks at Soam make the Surti version. They serve it with roti or pooris and some raita on the side.

The first time I had undhiyu was in the lunch buffet at the World Trade Centre in a Bombay Ad Club workshop in the early 2000s. Since K’s maternal side of the family are from Surat, we often get undhiyu for them. Usually from a shop called Regal Stores at Pali Naka. Gujaratis in Mumbai hold undhiyu and poori parties. I once had some made by Anaggh Desai’s wife for such a party.

I have found that the undhiyus that I have eaten to have varying levels of sweetness (mildly sweet to not sweet at all) and consistency (some more oily than others).  At Soam it has a prominent garlic after taste as the winter special green garlic is used in it.

I packed some undhiyu from Soam to take home for my mother in law, a former Soorti girl and an undhiyu lover herself though a Parsi. She was most excited by the fact that the Undhiyu tasted the same two days after I brought it home too as she prefers to savour it slowly.

I am not Gujarati and don’t have any childhood associations with undhiyu. However, it’s a big part of my Mumbai food discoveries and has become like comfort food for me.

Ponk, or millet kernels, is another winter speciality of Gujarat especially at Surat. I first heard about it in a TV show, Rocky and Mayur’s I think. Sounded like 'pork' which surprised me till I saw what it actually was! It’s called hurda/ hoorda in Maharashtra and you get it in winter here as well I am told.

My mom in law says that she used to have ponk as a kid while growing up in Surat. She has memories of people peeling and separating the ponk kernels on the bank of the Tapi/ Tapti river. She went back to Surat recently and felt the river bank has shrunk! I wonder if this is truly so or whether this is a case of things appearing bigger when one was a child

Soam has been offering ponk from Surat on the menu for the last ten years or so. They have a variety of pink dishes on the menu right now. Bhajias, khichdi and as a bhel too.

The bhel is what we chose as we were pretty full from the our Finely Chopped Mumbai food trail when we reached Soam. We felt that having it as a bhel (where the ponk was not cooked) was a good way of experiencing the true taste of ponk.

The ponk bhel turned out to be refreshing and light. The ponk didn’t seem to have a very distinct flavour. However it added a nice bite to the dish. A 'nutty texture' as I saw someone describe it somewhere on social media. Made for quite a pleasant dish even for someone like who had no prior ponk background or love.

The third dish that we tried from the Soam winter menu was lasan na vagherla rotlu which Seema got very excited about. It’s a Kathiawadi dish Seema told me and something that her mother makes.

I thought it would be like a flat roti. However it is actually similar to a Rajasthani baati, of dal baati churma, explained Seema and is served crushed. The dish is made with millets which makes it pretty earthy and filling and you don’t have to eat too much of it to satisfy your hunger. It is flavoured with green garlic which is a winter speciality, onions and ghee too. It is served with dahi and tasted delicious. Seema approved of the preparation at Soam and smiled widely.

Kathiawad is an arid region in Gujarat. Too many vegetables don’t grow there. However the locals have ‘turned poison into medicine’ and make some lovely vegetarian food with a mix of flours, lentils, chillies, garlic and onion and ghee.

The desire to eat well brings out the best in people.

So these are some Gujarati winter specialities that I have got to know over the years in Mumbai and learnt to like.

Do you have any favourites among these?

Does your community have any winter favouites? I would love to know about them if you do.

As for me, I miss the fulkopir shingara (samosas stuffed with cauliflower and potato), which were a winter must from the sweet shops of Kolkata when I was a kid. 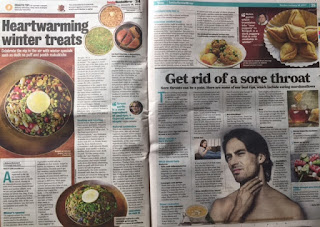