on March 21, 2017
This post is dedicated to my father in law, the late Marzban Bilimoria, who loved kulfis almost as much as he loved the rest of us and that's saying a lot
Eating for Instagram

I had a kulfi from a kulfiwallah on the streets after ages this weekend. This was in the lane where we live in Bandra in Mumbai.

I spotted him when I was heading back home on Saturday afternoon.  He had just begun to set up his kulfi stand on the pavement.

For the uninitiated, a kulfi is a frozen reduced milk based ice cream popular across the Indian subcontinent.

'Best Kulfi' said the front of his kulfi stand. The box was painted in a cheerful blue from the outside.  'A1', meant to signify 'the best' in Bombaiyya lingo, was also written on it for good measure. 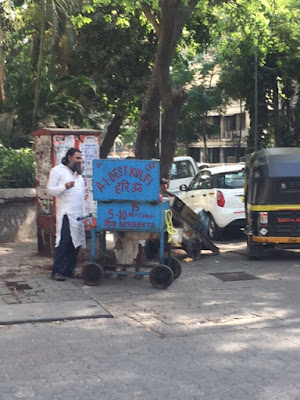 What attracted me to him was the gleam of the little metallic kulfi canisters inside the cart. The frame of him and the cart was Instagram material I thought. I didn't want to intrude on him though and walked on without taking a picture.

I then turned back and then noticed that a crowd had surrounded him even before he had finished opening his box. He started to take the kulfis out from the canisters they were frozen in and began to dish them out.

That's when an idea struck me, I switched tracks and retraced my steps and walked up to him.

"What flavours do you have?" I asked.

"Malai koolfi," he replied as if it was the most obvious thing in the world. Almost spelling it out in case I didn't get it. 'M-A-L-A-I'

As I said at the start, I have not been to a kulfiwallah (kulfi seller) in ages.

In our earlier days in Mumbai, when we were young and restless, or just hungry actually, my friends and I would often go to the kulfiwallahs who set up shop across the lanes of Bandra.

I am talking of a time from almost two decades back. These were evenings after work when we were done with our beers at Toto's or Temptation or Pamposh, and chicken fried rice and chicken Manchurian at Stomach or Sahibaan or Tiffin, and wanted a sweet ending to our day before heading home to our respective PGs.

I was skinny then and didn't do annual health check ups. The only thing I thought of before having a dessert in those days was whether it would add an unnecessary expense to my day's spends.

The kulfiwallahs I am talking of offered a variety of flavours. Mango. Pista. Kesar. Sitafal.

Not just the malai flavour that the grandpa I met this weekend had in his treasure chest.

The kulfis sold by the kufliwallah I used to go to were disc shaped. The kulfiwallah would unwrap the kulfis out of their butter paper jackets, cut  each into tiny cubes, put them on stainless steel plates and then serve them. My friends and I would order a variety of flavours and share these and munch on them happily, revelling in our new found independence.

We had just started working. We were living alone for the first time. We were on a high.

You will find kulfi sellers like those still in Bandra as I am sure in other parts of the city, as Mumbai loves its kulfis. One such kulfiwallah stands in front of the Axis Bank at Turner Road and opposite Kotak Bank and HSBC after dusk.

His stuff is so cheap that you will not have to visit any of their ATMs for your sugar high.

I had gone to one such kulfi-wallah when we lived in an apartment close by and bought kulfi after dinner and had it at home. Didn't seem the same as it did while having it on the streets with my friends!

There is a kulfi van that parks itself outside Almeida Park. I noticed it when I go there for evening walks. I have never stopped to eat there though. We defeat the purpose of the walks! Seems popular though. The van is stationed till at least 10 pm.

Unlike the disc shaped kulfi that I remembered from the past In Mumbai and from Parsi wedding feasts too, our friend this Saturday was selling the conical shaped kulfis that are frozen in individual metallic containers.

This shape is similar to the shape of the kulfis that I have grown up on in Kolkata. He served his kulfis on a stick and one has them the way one has an ice cream lolly.

In Kolkata I used to have koolfi in restaurants such as Indramahal and Friends and Rallis, in central Calcutta near Esplanade, where my mom would occasionally take me for a treat when I was in school. I would continue go there once in a while after catching a movie at Lighthouse, Globe, Jamuna or New Empire during my college days.

Of the four movie theatres from my Cinema Paradiso years in Kolkata, only New Empire still shows movies!

He moved into Mumbai to sweeten our lives

The grandpa removed a red wet cloth, which shaded them and kept them cool, and took out a kulfi canister after I placed my order. He opened the lid and then proceeded to take the kulfi out. I took out my iPhone and clicked pictures.

"How long have you been selling kulfis for? " I asked him.

"Twenty, twenty two years," he replied, busy with the work at hand.

"What were you doing before that?" I soldiered on.

"Where was your village?" I persisted.

"I know of Azamgarh. Isn't it famous for its pulaos?"

In retrospect I realised that I meant Moradabad and not Azamgarh. My observation turned out to be an ice breaker though.

He broke into a toothy smile and said, "aap toh chaakhe nahin (you haven't tasted it yet).""

I took a lick of the kulfi, broke into a smile and said, "bahu achha hain (it's very good)".

"I will have the rest while walking home" I explained and headed back as I was late for lunch.

Manna on the streets of Mumbai

I  took another bite of the kulfi. A proper bite this time. Not just a tentative lick.

I realised that the kulfi was absolutely brilliant.

No, this is not a case of someone romanticising street food for the heck of it. It was actually very very good. Possibly one I have the best I have ever had.

I have found most kulfis that I have had in Mumbai to be rock hard when served. It takes a while before you can begin to enjoy these frozen treats.

Thanks to the sun perhaps, the texture of this kulfi was perfect though. It was a bit soft on the surface and one could enjoy it properly. It was almost as if the sun had melted the kulfi just a wee bit and told it to give you a hug.

The sweetness was just right. There was a slight caramelised feel to it. The taste was pretty shahi or elegant especially for a street side treat.

I didn't finish the kulfi at one go. I am supposed to cut down on sweets you see. The challenge is to taste something so good and to not finish it immediately.

Where can you find him?

I asked him if he sets up shop at our lane every day.

He told me that he keeps moving around Bandra and sets up shop when he sees a good spot and then moves on to the next stop after a while.

It is a bit hard for me to tell you where and when to find him,  but if you do see him and are a kulfi or a dessert lover, then do go and buy yourself a ten rupee serving of happiness from him.

23rd March 2017. I saw him on our lane a few days later. Different spot. Different time of the day

Do check out my book, The Travelling Belly, to read more of my Bandra food stories. Here's the link to where you can buy The Travelling belly on Amazon.