Granny Diaries... Going back to my roots in Kolkata

I woke up this morning in Kolkata with no backache, headache or stomach upset and that was such a relief.

Last night I had noticed that there was a boiled potato nestled in the rice that didu, my granny, had made for me. While we chatted after dinner, I saw her break pieces of it into a plate which had some water in it too. I was intrigued.

This morning I knew why she did what she did.

No sooner did I step out of the washroom after brushing my teeth did I see didu skate into the kitchen with her walker and with a vigour that was long gone from her life.

Turned out that she was making me breakfast! She made me a toast sandwich stuffed with mashed potato, sliced onions and green chillies and it tasted divine. Now you know what happened to the potato from the previous night.The bread of the sandwich was toasted perfectly and timed for me to come to the table.

She used to make me these potato sandwiches in a hand held grill when I was a kid and would come here for summer holidays. She told me that she had brought the toaster from Delhi and it broke years back. I told her about how hand held toasted sandwiches are a rage on the streets of Mumbai.

She made a soojir payesh (semolina milk pudding) too with kishmish (raisins) that she knows I love. She was a bit wistful that the sooji turned out to be less than what she had estimated.

I tried to assure her that this was more than enough for me.

To market to buy a big fat fish

I went to the Bansdroni market after that which is near our own apartment. I wanted to buy her some fish and veggies. Markets are my happy place and this is the market I have grown up on. Didu told me that she likes small fish, often sold live. I bought fish that I never have before - koi, kajoli, topshe and a whole live chara pona or small rohu and then the more familiar pabda ans a biggish ilish too. I tthen bumped into a neighbour of mine and we chatted for a bit. I felt so at home.

This market is my home ground after all. One fish seller called out to me as I often bought fish from him in the past. I recognised a vegetable vendor from my past and bought veggies from him today. What struck me was that the abundance of vegetables here is so much more than in Mumbai while Bengalis are considered to be non-vegetarians.

The nostalgia bit continued when I saw Gopal Naskar or Sonada from whom I used to buy a chicken every Friday evening for our weekend curry. I didn't know his name before and asked him the same today. Everyone laughed when he said Gopal Naskar and said that he is actually known by his nickname.

It began raining when I was done and I took an auto to the neighbouring and new CCD for a cappuccino. Cafes too are my happy places today. When I lived here, I hadn't probably heard of a cappuccino. I used an Uber one way and Ola the other.

Lunch was home cooked fare sent by my boro-mashi or aunt. A lovely macched mudo diye dal or fish head dal, which is my favourite, to start with. Then there was a pomfret curry. Yes, we Bengalis eat pomfret too and I like our version of pomfret curry, which has no coconut in it, better than the west coast ones as you can get to taste the flavours of the fish here. Ending the gala meal was a light hilsa or ilish curry. K loves mashi's cooking and she missed this feast.

Evening was what I referred to as 'Kolkata on the trot'.

While we don't have a lot of family that we are in touch with, Kolkata today is now filled with friends of mine. There was a time when I hated coming to Kolkata because I had no friends here as I had lost touch with my school and college friends. Thanks to social media I have reconnected with some of them and made many more new friends. Unfortunately in such a short trip, I have not been able to meet many. I met some this evening though.

I met Debjani, once an Instagram friend and now a family friend and fellow Soka Buddhist too. We had cha (ice tea for me) and biskoot at the charming Abar Baithak cafe in Jodhpur park.

Then I went to Byloom where I met someone very special. Soma Chaudhuri, who was a junior from college with whom I connected on Facebook. She was from the same department in Presidency too, Sociology. For years she has been a supporter, well-wisher and friend of me and then my mom too. We finally met today and I met her lovely daughter too.

I also met my classmate Debanuj who was in town too and Saibal from our batch. I had some luchi and mangshor jhol while Ahana, Soma's daughter, went for the French fries. 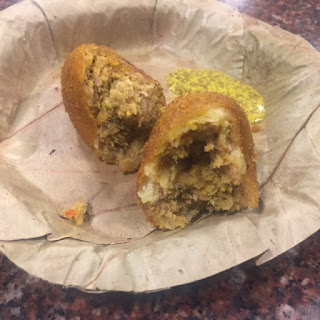 I then went across to Lake Town as I was keen to see the Machhli Baba fish outlets that my friends from Bhojohori Manna. The fish shop looked nice and clean and very different from the fish market. I then walked across to the Machhli Baba FRIES outlet where they sell chops, cutlets and shingara. I had a fish chop, which was fried fresh and was made with mashed rohu and tasted delicious.

I smelt phuchkas on the way to the fish fry shop and after my fish chop went to the phuchka shop where I had 5 for Rs 10. I photographed one. Instagram boomeranged another. Took a selfie with another. Thankfully the phuchkawla indulged me.

I returned home feeling happy and at home and had dinner with didu who was waiting for me. To join the food mashi had sent, didu made a chichinge (snake gourd) bhaaji which had shredded coconut from a tree in her garden and the addition of which reminded me of stir fries in Mumbai and I told her the same.

We sat at the dining table and chatted for a bit till didu went to sleep at 11 and I freshened up and sat down to write.

Please scroll down for more pictures 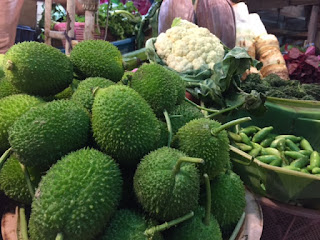 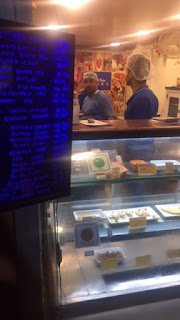