I owe the writing of this post to my mother who asked me why I hadn't written a post on Christmas this year. She did her best to carry on my late father's legacy ahead,  and made sure that we always celebrated Christmas at home when we were growing up, no matter what life threw at us, and therefore made Christmas so special to us.

I came home from a sumptuous dinner in Colaba the other night, to find a most pretty looking Christmas cake left for us at home. It was dropped in by a friend, who I first knew through work, and who turned out to a neighbour too and who lives literally across the road. 'My good neighbour,' to borrow a term used by this wonderful soul.

K and I decided to watch the last episode of The Crown (season 2) on Netflix that night, even though it was close to midnight. I got up in between watching the Queen go through her set of woes, went to the fridge, and brought the cake back to our bedroom. I then cut a slice and munched on it. It turned out to be one of the nicest Christmas cakes that I have ever had. The cake was moist and 'boozy' as they say. Packed with flavour, raisins and sultanas and loads of love. Sweet but not cloyingly so. It had a marzipan icing below thin red fondant, which gave the occasional mild touch of salt and the nuttiness of almonds, and acted as a counterpoint to the sweetness of the cake.

One slice became two and then three and four too. Which is when I got up again and went to the kitchen and put the remaining cake in the fridge. That was the only way to stop myself from eating the whole one at a go I realised. 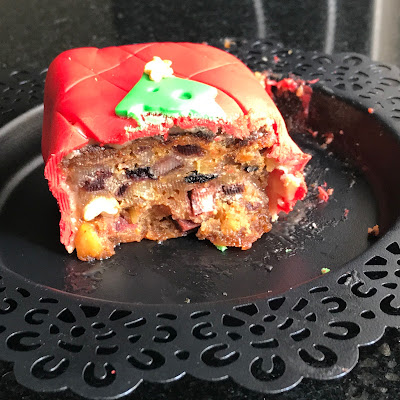 This Christmas week has been a good time to remembercr of one of the things that I love and cherish most about Mumbai. The fact that one has neighbours and friends who belong to all communities here.

What does this translate into? Food gifts from across cultures during different festivals. So during Eid we get sheer korma and biryani from neighbours and from Banu and from Vader bhai who fixes our ACs. During Ganesh Utsav, modaks from the Maharashtrians, and then Diwali faral again from them a few months later. This Diwali, we also got a tin of chocolate biscuits from a Parsi, Sindhi sweets from a Gujarati neighbour and then brownies from a Korean family!

During Guru Nanak's birthday a month later, we got kada prasad from the Golden Temple from a Punjabi family and then another invited us home for freshly made Punjabi kulcha chhole (!) on new year's day.

Which brings me back to the Christmas and our Christian neighbours who have sent us local Christmas sweets such as kulkul, guava cheese, marzipan, jujubes and cake, all home made, either by themselves or by industrious 'Mac aunties' who live in the by-lanes of Bandra. I now have a dedicated plate, I have no idea where they are from, to click and Instagram Christmas food gifts sent by friends and family on.

Feeling at home in Mumbai

Contrast this to my first Christmas in Mumbai in what seems like a lifetime back, when I sat quietly and morosely in my PG near the Bandra talav watching, most appropriately, Home Alone on TV, and wondering why Christmas felt so quiet and lonely here compared to the way it was in my home that I left behind in Kolkata.

Twenty years later I feel blessed to have found a home and family, in Mumbai and in Bandra, and be surrounded by Christmas goodies in the bargain. Of course, there is also the role that marketers have played in making Christmas a thing here over the years!

This year, during the first Diwali that we spent in our new house, we distributed Bengali sweets from Sweet Bengal among all our neighbours and the building society staff. I think that we will make this a practise from now. Except that we should shift the date to a more Bengali appropriate Bijoya Dashami, the last day of the Durga Puja, and add our little chip to the gorgeous mosaic that is Mumbai.

The red Christmas cake was made by Candy Rebello who is based in Mumbai. This is the link to her Facebook page
Bandra christmas festival food festivals mumbai Mumbai highs