What makes a Bengali order a paapdi chaat in a Bengali Sweet House?

We are a family of namkeen and farsan lovers. Which is why, when I travel across the country, I prefer to pick namkeen over mithai (sweets) as gifts for my mom in law and my maternal uncle and aunt in law who live in Mumbai, and for some close friends too. When I go to visit my brother in Delhi, I take banana chips and chakli from Mumbai for him. Knowing of my weakness for these savoury, fried and crunchy snacks, my friends from Kolkata bring chanachoor for me when they come to visit me in Mumbai. Mukhorochok brand’s jhaal papdi chanachoor or the stuff from Ujjala at Bhawanipore would be just perfect. And some Jharna ghee please.

I try to go to local sweets shops when on the road to buy my namkeen whenever possible. At times my trips are very short and I cannot make it to the city markets. In such cases I often depend on airport shops for my namkeen purchases. Thankfully, many Indian airports today have kiosks selling food-stuff from local legends. The prices, if you are lucky, could be the same as what you would get in the city. If not, then one sees this as a trade-off for not being able to spend the time and money to go to those shops during one’s travels.

I did not have to depend on airport shops during my visit to New Delhi last month thankfully. That is because I chanced upon the Bengali Sweet House at New Delhi’s Bengali Market. I had met Amit Patnaik for breakfast at the All American Diner and was heading back to my hotel at CP when I saw the shop. I decided to stop there to stock up for folks back home. There are three big sweet shops at the Bengali Market circle. One is Nathu Sweets, which is located opposite the two Bengali Sweet House shops. I had gone to Nathu’s a few years back to have a chhole bhature and gulab jamun breakfast with Scottish food writer, Pamela Timms, who lived in Delhi at that time and was writing a book on the food of old Delhi.

Yes, you are right. I did mention that there are two (!) shops called Bengali Sweet House in the market. The shops are located next to each other. I went to the one that falls on the right when you face the shops.

I spotted a young gentleman sitting at the cash counter and decided to speak to him to figure out to the story behind the existence of not one but two Bengali Sweet House. He told me that his name is Lakshya and that his grandfather, the late Lala Bhimsen, had set up the business in 1937. Bhimsen and his brothers (Lakshya’s grand-uncles) had split the business between themselves a few years later and that is what led to the existence of two shops with the same name said Lakshya. The two shops are now run by the descendants of the brothers who had run each originally. Lakshya’s sister sat at another counter across him and he told me that she too helps run the business.

The split in the family business had happened amicable I guess. Let me give you the reason for my arriving at such a conclusion. When I asked Lakshya about the difference in what is available between both shops, he replied, ‘nothing, they are both the same.’ He didn’t make any claim of superiority for his own shop and that impressed me no end.

Both shops had long counters with an array of sweets and namkeens on display. There were also trays filled with jalebis and kachoris and samosas and, given that it was winter, gajar ka halwa, calling out to me. Like many sweet shops across the country, Bengali Sweet House too had a ‘Bengali sweets’ section. However, there was nothing Bengali about its ownership from what I learnt from the staff at the shop. It is apparently named after the Bengali market where it is located and which in turn, was named a after a gentleman whose name was ‘Bengali’ but was not actually Bengali!

Each shop also had a seating area where you can get vegetarian thalis and chhole bhatoore and even sweets and snacks. They had a chaat corner where you could have gol gappe and alu tikka chaat and dahi bhalle and of course paapdi chaat.

I got a bit distracted from my gift buying I confess and stopped to have a paapdi chaat, which is my favourite Delhi chaat. I got a plate made and then took it to share with Amit, who was loyally waiting for me outside in his car which he had parked by the pavement.

The paapdi chaat at Bengali Sweet House, with its crushed and crunchy paapdis (or puris as the bhel puri-wallahs of Mumbai call them) and bits of soft boiled potatoes swimming happily in a pool of sweetened dahi, smeared with streaks of a slightly tangy and chilled tamarind and jaggery chutney, with the astringent bites of slivers of fresh ginger the fruity goodness of pomegranate seeds interspersed in between, all spiced up with chaat masala and red chilli powder and rock salt, showed that when it comes to a balance of flavours and textures and colours and temperatures in Indian food, nothing can beat the chaats of the streets of India. And that and when it comes to chaats, there are few that can compare to the glory of the popdi chaats of Delhi. Both Amit, and Odiya, and me a Bengali, enjoyed our papdi chaats and then talking profile pics of each other like we do when we meet. We stood by the chaat wall basket for it. A few golgappas rolled out while I posed but I manage to catch them by showing reflexes which I am sure dada (Saurav Ganguly) would too if a few rasgullas rolled out of a bhaar in front of him.

Here’s a fun fact about chaats. Today many of us get justifiably worried about the quality of water used in chaats and prefer to stick to shops such as the Bengali Sweet House which use filtered drinking water while making chaats. Yet, as the story goes, chaats were introduced in Delhi by local chefs in the courts of the Mughal emperors who were worried about their subjects falling prey to waterborne diseases during the monsoons. The pepperiness of chaat and the yogurt used in it were meant to be antidotes to that. How true is this story is not something that I can vouch for but there's nothing but a dash of folklore to add flavour to ones plate. 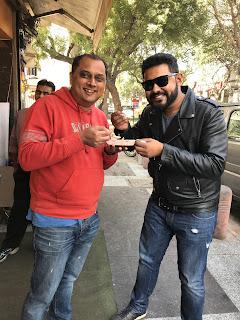 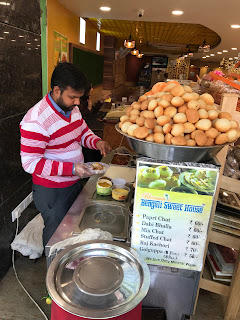 So what did I pick from Bengali sweets after I was done with my paapdi chaat excesses? I picked up bags of mathris for the folks in Delhi. Mathris are deep fried, crunchy refined flour discs, which have an enticing spice mix of roasted masalas tucked inside, and whose composition changes from shop to shop and from home to home. They are popular in the north of India, especially among Pujanbis.

I also picked up some freshly made green peas kachori for my brother who lives in Gurugram and to whose house I was headed from the shop. He loved them when he had them, just as I did when I tasted one at the shop. The kachoris, unlike the mathris, have a shorter shelf life so I guess my brother got lucky as I couldn’t take it for folks back home!

So that’s an example of how I shop when I travel. And what about you? What do you like to shop for then you travel?

Some food stuff I hope. Give me a high five if its namkeen that you buy!

Delhi folks, if you have a favourite papdi chaat place then please do tell me about it. I would love to go there and try it out.

A video that Amit shot on my iPhone at the Bengali Sweet House:

Post from when I met Pamella Times at Nathu's for breakfast