I had never come across the ros omelette, during my earlier holidays at Baga in Goa. Nor had I heard of them. That's possibly because the eateries at Baga are more tourist focus. At one time they consisted of beach shacks (when in season) and dive bars with minimalistic menus which today are out numbered by restaurants cheekily proclaiming their offers of Chinese, Punjabi, Gujarati and 'Indian' vegetarian food.

It was during a stay at the Marriott Goa a couple of year back, that the then exec chef there, Anupam Gulati, told me about this snack which is apparently popular across the capital city of Panjim where it is sold on the streets. I didn't get to try it on the trip and then fell on the last night after eating out during a hosted review at a new restaurant outside and couldn't eat the ros omelette that the hotel had prepared for

I couldn’t make it to the stalls at Panjim on that trip. This time though I saw a couple of ros omelette stalls even at Calangute and which also sold vada pav etc.


Then I spotted ros omelette at the breakfast buffet at the Le Meridien during our short holiday there recently. Chef Saurav Chattoraj, who is half Goan (from his mother's side) and half Bengali, on my request told me how it’s meant to be eaten.

You slice a poee (poi, poie), the local Goan bread made by a diminishing lot of local bakers and in the hotel too, and stuff in the omelette and the curry (ros) into it, and eat it as a sandwich. The curry, the chef explained, was traditionally the previous day’s chicken xacuti's (pronounced shakuti) coconut based curry into which masala omelettes, fried the next day, were cut & put in.

I liked the combination of the spicy omelette and the curry redolent with the natural sweetness of coconut, all soaked in by the soft, husk sprinkled bread.

The xacuti for the ros at the hotel is made fresh everyday & didn’t have the punch of the street-side ones made with leftovers from the previous night said the chef with a bashful shrug and a smile, ‘’baasi (food kept overnight) has its own flavour’.

While I didn’t get to have the street side versions this time either, I at least got a sense of the taste of the dish.

The next morning at the Le Meridien, executive chef Vamsi, made me try their ‘locallu inspired’ breakfast of deconstructed ros omelettes which was modelled on the egg Benedict. Fried eggs with slightly runny oaks replaced the omelette here and was placed on the poee, which was  then put on a bed of the xacut curry and on which were sprinkled finely chopped red onions & green chillies. The combination worked with for me and I quite enjoyed it though the earnest chef did point out that having it in the by-lanes of Goa would be a different experience indeed.

It is good to see hotels in India increasingly bringing in a local flavour to the menus and full marks to the Le Meridien Goa for that.

We saw further examples of that at the dinner that they hosted for us their whiskey bar, Jazz Bar & Grill, in the succulent boneless leg pieces of chicken tossed in a cafreal masala and served with butter and cafreal masala smeared poee which I enjoyed much better the traditional curry format, egg rolls with smoky Goan choriz stuffed in and also prawns tossed in the fiery peri peri masala, where thanks to the of the exposure to modern cooking techniques, the chefs didn't overcook the prawns were possibly the most moist and best cooked among the prawns that we had at Goa this time 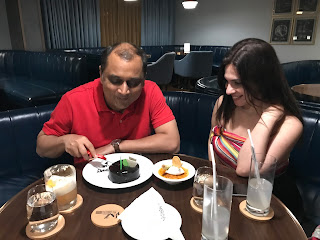 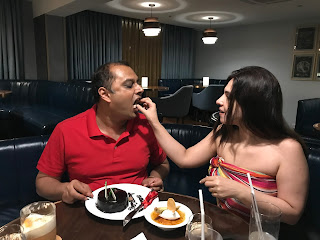 I left Goa with the resolve that I must come back soon to try the ros omelette at a stall the next time I am in Goa though.

Anjali Heredia There’s a cart outside Hotel Fidalgo in Panjim which operates late at night till the wee hours of the morning. We haunt it after a drinking binge usually n go home to sleep till noon.

Ankur Sheth Kalyan Karmakar ..there used to be a great stall outside the Goa medical college..but think used to open only late nights. Had loved that and I think it was one of the best Ros omelletes I have ever had

Here's a picture put up Mohit Balachandran on a street side ros omelette. Click this link on his page for more suggestions on where to find ros omelettes in Goa. 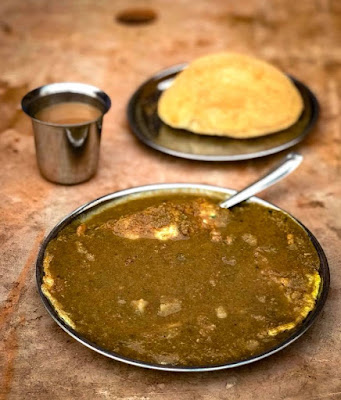 Do check out this post of mine on the Bengali version of the omelette curry.