How a phone call with my grandmother led to my making a pabda machher jhol (Bengali catfish fish curry) for lunch. Here's the recipe.

Caveat emptor: Scroll to the end if you belong to the 'spare us the story and give us the recipe' mob.

The hotline to my granny

"Boyesh hole kheede chole jay (one's appetite goes with age)," said my granny to me when I called her a few days back.

"This had happened to my mother in law as well. She had lived till long but could barely eat in the later years," added didu, my grandmom.

Didu is short for didima. Some also say dida or didan. All terms of endearment.


I remember the lady she was referring to. My grandfather's mother, my great grandmother.

I remember her as an old and thin lady, in a white sari, whom one would see in family gatherings such as weddings, when I was very little. I was most amused then to know that my grandfather had a mother! Aren't grandparents supposed to be the oldest people ever, I wondered then as a chubby eight year old.

Now neither my grandfather, nor my great-grandmother, are alive. My grandmother has turned 90 herself. She can stand only with great difficulty, and that too by using the walker, as her knees have given in. She was not well when I spoke to her that evening. She had completely lost her appetite then and hence the focus on appetite in the conversation.

I don't call didu as often as I should I know, but I did eventually call her again a few days later when I heard that she still wasn't well and was feeling rather lonely.

We spoke for a bit. I asked her what she was doing and she told me that she was watching TV. "What else do I have to spend my time with?"

This was a rather different didu from the one I had known all my life. The one who is always brave and in high spirits and asks about others instead of talking about her own ailments.

I guess the strongest of boulders eventually begin to give in to the gnawing tide of age.

A glimmer of hope in the kitchen

To change the conversation I asked her about what she was having for dinner. What was her cook making.

"Aami baniyechhi, neeje," she suddenly said and I could hear a smile creep into her voice.

I cooked it, myself, she explained.

She told me that she felt like eating today after a long time. That she knew that her cook would not pay much attention while cooking it and that the dish wouldn't taste good. Hence, didu had decided to cook for herself so that she could have a good meal.

She told me that she'd also got hold of a cabbage and was getting it cooked with green peas and cubed potatoes.  "Must make the most of the winter," she said. "These are winter vegetables."

In Mumbai, we get cabbage et al through the year, I told her, I said that I had bought a large kaatla fish from the market recently and had used half the head to make cabbage.

"Macched mudo diye badhakopi khub bhalo hoi," (cabbage does taste lovely when cooked with fish head) she said, and I could again hear a smile in her voice and sense a twinkle in her tired eyes.

It was good to her her talk about food. Or about cooking her it too. To me this was a Rocky moment and akin to the boxer getting back into the ring one more time in movies from the series.

Who knows what tomorrow holds, but my call with her that evening made me happy and gave me hope.

I later realised that there's a bit of my grandmother in me.

I love to eat too and don't trust the cooking of all. In fact, I had first taught myself to cook as eating well is important for me. Which is why, while our cook Banu made the cabbage as per my instructions the other day, I still finished the dish on the pan myself.

Didu is considered to be the best cook in our family and I hope  that I have inherited a tiny speck of her genius in the kitchen.

Keeping this spirit in mind, I refused to order in last evening when Banu, our cook, had bunked once again. Instead, I took out my cast iron pans and made dinner for K and me.


I sauteed aubergine (begun in bengali) in olive oil, sliced onions (leftovers from onions which had come with some kebabs that I had ordered for lunch), finely chopped green chillies and ginger, salt and pepper, and chopped olives which I added to the end. When the dish had cooled down, I added some crumbled feta (made and sent by Dhvani of Casa Del Cheese in Mumbai), and fresh coriander to make a Mediterranean themed salad.

I paired this with the rawas, or Indian salmon, that I had bought at the Khar station fish market on Sunday. I pan seared the fillets in olive oil which I had seasoned with dukkah, Persian lime powder and sea salt first. When done, I added some sumac on the fish. These are all Lebanese spices.

The dishes cooked like a dream in the cast iron pans that I had bought recently from the Mahalaxmi Saras exhibition.

And finally, here's your pabda

Today Banu did come to work, but I had decided to follow didu's lead and make the pabda that was there in the fridge myself as I knew I would do it better than her. Pabda, a variety of catfish, is a delicate fish and most Bengali restaurants make a hash of it too as they overcook it as tends to happen in commercial kitchens. The other popular catfish which Bengalis love is magoor. My thakuma, or paternal grandmother, was a fan. I've seen it in Mumbai markets too.

To be honest, my wife, though a Parsi and not a Bengali, loves pabda, and fish in general, more than I do. I prefer to buy and cook fish instead. Hence there are three fish in the pan, two for her, one for me.

I made a simple patla machher jhol (light and delicately flavoured fish curry) with it, the recipe of which I'd picked up by observing my mother though I've not really taken the recipe from her. You could make this with mustard powder too to make a shorshe curry. Or fry it lightly and eat it. The recipe would vary from kitchen to kitchen. I am not granny after all so am not making any claims to authenticity. I used to add cumin powder before but some Bengalis on social media said they don’t so now I try it without.

Add brinjal, green beans to it or perhaps cauliflower to if you want to add bulk.

"Alu chhara ranna hoi?" ...what's food without potatoes as my granny once said during one of our chats.

I decided to dedicate the dish and this post to my granny and her fighting spirit, may she never lose that. I hope I can cook it for her some day.

My recipe for pabda machher jhol

The dish is simple to cook, doesn't take much time and here's the recipe. 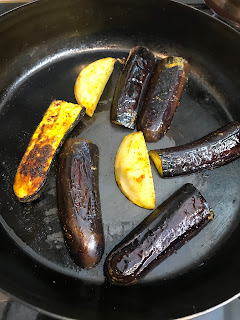 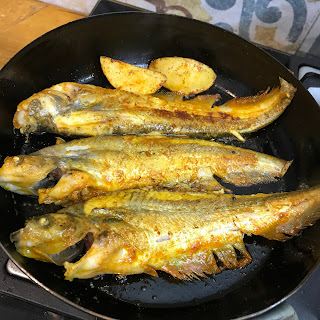 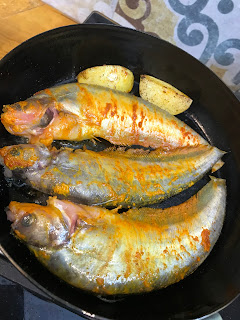 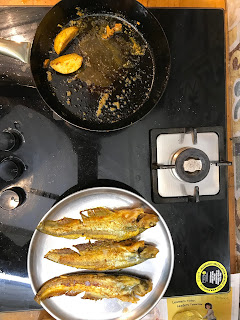 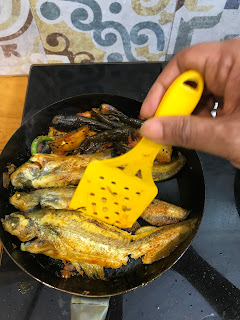 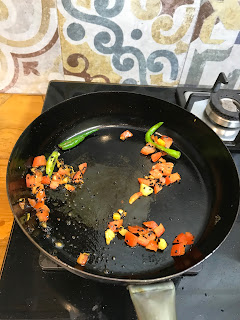 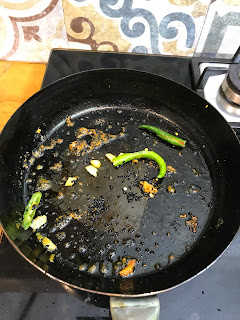 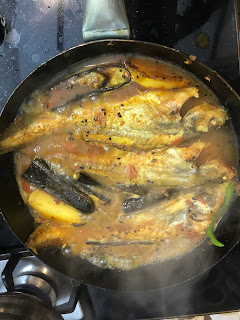 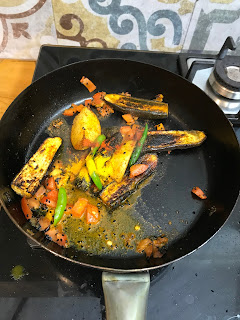 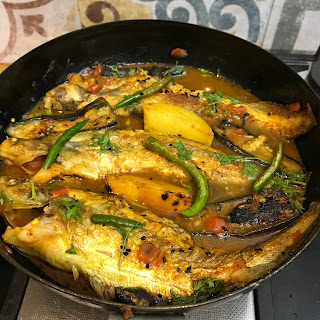 Pair this with plain steamed rice. I prefer Basmati rice but the traditional rice eaten with this in Bengal has shorter grains and could be fatter.

The missus has this as a stew without carbs.

I bough the fish from Poonam and Sangeet's at the Khar Station Fish Market. Check this video that I shot on my phone to know more about it: