How to spell ‘happiness’ in Bengali This  post is from my Instagram feed. Not been able to finish a couple of blog posts that I am working on but thought I’d share this till then.

A picture that I like to call, ‘how to spell happiness in Bengali.’

My cousin dropped in at dawn today, when I was fast asleep, on a work trip to Mumbai. As always, I tried to feed him breakfast but he said ‘po-re’ (later) and had the tea and heart shaped (don’t judge us, Sodabottleopenerwala had sent it on Valentine’s) khaari biscuits that I offered. 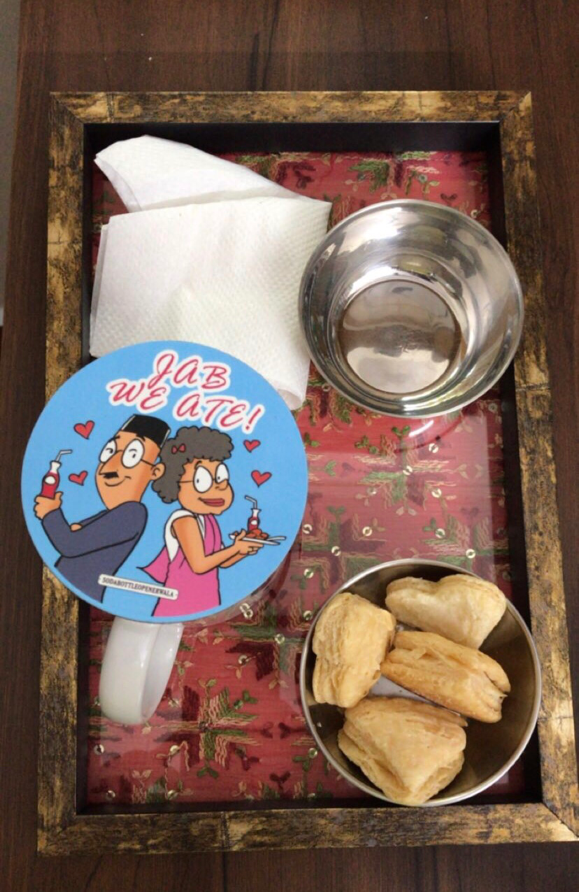 He did have lunch though. Jeera chicken and rice from Khane Khas. I prefer to have white curries with roti and not rice but he was firm and well, he’s a grown up now.

There was a bit of googly later as he wanted to watch the India South Africa match and ever since we’ve moved to Netflix and Amazon and stuff, we’ve not renewed our satellite connection. I refilled our account but couldn’t find the remote. Finally figured that we could watch the match on Sony Liv along with some hilarious Hindi commentary while Kohli scored yet another century. I don’t follow cricket anymore you see.

He wanted ‘veg’ for dinner and we happily tucked into an excellent bhaaja moonga dal with fried bits coconut and green peas, a divine alu jheenge posto and Gobindobhog  bhaat, the short grained aromatic rice that we Bengalis dote on. The only difference between our meals was that I took the Instagram worthy plate and a touch of Jharna ghee which he didn’t want.

To ensure that I don’t try to make him have breakfast before he heads off to work, he told me that he’s bought a pack of Oreo’s for that!

I am the eldest in my generation of my mom’s side of the family and do tend to forget that my cousins have grown up.

He quickly said goodnight and ran to the guest room when I offered him some chocolate!

PS I had called in for dinner from Oh! Calcutta, Khar through Swiggy. It’s fairly expensive (Rs 895) but worth the money. This is superb stuff. Both in terms of taste and of the quality of ingredients used.

My cousin, who is stationed in the interiors of Maharashtra at present with no access to Bengali food, tripped on it as did I.