on March 29, 2018
This post first appeared on the Chopping Board, where I blog for The Times of India. You can read my other posts there over here.https://blogs.timesofindia.indiatimes.com/the-chopping-board/

Every city of India has its own version of biryani and battles break out on which one is the best. If you were to dub one dish as the ‘national dish of India,’ then to me that would be the biryani. There are vegetarian versions of it too now, so there’s a biryani for everyone you could say.

While each biryani has its own loyalists, I am yet to come across a group as passionate and, more importantly, as vociferous as the devotees of the Hyderabadi biryani. As a social experiment, start off any discussion or poll on biryani on social media and you will see Hyderabadis from all over the world come out, proclaiming strongly that theirs is the only ‘real’ biryani and the ‘best’ one. While I won’t necessarily agree with that argument, I would definitely doff my cap to their fervour and what’s life without true love after all.

Biryani is in our blood, as Rodrigo of the Amazon prime series ‘Mozart in the Jungle’, would say!

I had gone to Hyderabad a few years back, to conduct focus groups for a market research agency I worked for back then. While the research was about airline travel, I  used the opportunity to check out some of the city’s biryani joints which were local favourites and went beyond its most famous one, Paradise. I had a very good experience at Café Bahar and then a wonderful one at Shadab in the old city of Hyderabad. I later wrote about these escapades in my book, The Travelling Belly.

I was back in Hyderabad last month. This time as a food writer and not a market researcher, and to give a talk at the prestigious National Police Academy to the 2017 IPS batch. The topic, ‘community building through food.’

The National Police Academy is located at the outskirts of modern Hyderabad, but not too far from the old city. I took advantage of my being based there and went off to the old city for lunch, after my workshop and before my flight back. My destination was a restaurant called Shah Ghouse which many local food lovers had recommended to me for its biryani. Shah Ghouse has some gleaming new outlets spread across the city in areas such as Gachibowli. The original outlet is at Old Hyderabad’s Shaliabanda or Shah Ali Banda, though. ‘It’s grimy and not too clean,’ said some, but when has that ever stopped me?

When I reached Shah Ghouse, I saw that it followed the same structural plan of some of the other popular biryani places in Hyderabad that I had been to in the past. The ground floor is where they serve tea, or dum ke chai, as they called the tea brewed in deep metallic barrels here. You get a range of bakes and Sulemani biscuits and snacks such samosas and pakoras to order and have with your tea.

You climb up the stairs to reach the dining area. The staircase reminded me of the old government buildings of 1980s Calcutta which housed insurance and banking companies. Dark and cool, with high ceilings and broad steps with handbills stuck on the wall. There would be pan stains too back home, I don’t remember if this had those too. Empty overall and strangely enough, both calming and intimidating depending on the objective of your visit. 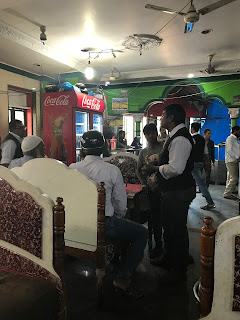 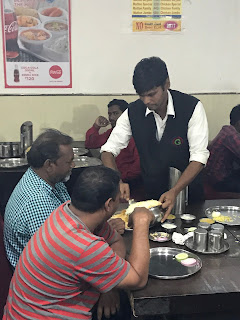 I was greeted by the aromas of the biryani when I reached the first floor, and felt like a nawab of yore being welcomed by his favourite courtesan. The first floor, houses the ‘general’ eating area. The floor above, which I then checked out, was for ‘families’. Code for ‘no stags’.

It was 1 pm on a Friday afternoon. Both floors were empty. I decided to sit in the general floor. The emptiness worried me. Had I come to the wrong place?

My friend Pradyumna Malladi, who had recommended the place, and whom I messaged about this, reassured me from Tokyo where he was on work that day. Hyderabad lunches late in the old city, especially on Fridays he assured me, and sure enough, the place got filled up as the clock crossed two.

The tables were Spartan, the lights white and harsh. The room was cavernous. There were aluminium buckets with dirty dishes in them, strewn carelessly around. That apart, the restaurant was not particularly ‘dirty’. The thing about the ambiance perceptions is that it depends on what you are used to and how open you are to experimenting. If you are someone who eats their biryani at Idrees, the famous road side biryani joint in Lucknow, then Shah Ghouse would seem like a fine dining establishment. If a Dum Pukht, on the other hand is where you go for your biryani fix, then Shah Ghouse won’t be up your street by any stretch of imagination. Moreover, India is a country that is in a state of change. The world of Shah Ghouse, and of old Hyderabad in general, talk of an India of yore. That of a Nizam in Kolkata, or a Moti Mahal in Daryagunj or a Koshy in Bangalore. The city centres have moved since then and the post 80s generation is more familiar to an India which tries to match up to the ‘modern’ world, specifically the west. To this generation, Shah Ghouse would seem more like apt as cafeteria of the Jurrassic World. Thankfully such legends still run packed, as there are many Indias, and not just one.

Incidentally, the Shah Ali Banda outlet of Shah Ghouse was opened in 1989 according to the Shah Ghouse website. A telling statement of how much Hyderabad has changed of late. Today, the modern city is home to the prettiest looking cafes around from what I saw during my drive around the previous night.

Coming back to the Shah Ghouse at Shah Ali Banda, it was not air-conditioned but yet didn’t feel warm that January afternoon. The waiting staff was enterprising and efficient. Then menu went into many many rows beyond biryani and had ‘Chinese’ offerings of course!

The biryani came in multiple portion sizes it appeared. I chose mutton, and the smallest one possible.

It was served to me with the customary yogurt based dahi chutney and a nuanced curry called mirchi ka salan.

The rice in the ‘small’ portion was enough to feed a king’s retinue. I packed 3/4ths and ate the rest. Finishing the entire portion needed a bigger man than me to be honest.

The rice was long grained, separate from each other, aromatic and visibly cooked with great finesse. The pieces of mutton, ample and very tender. The masala was not gravy like, unlike in Mumbai, though the rice was not dry at all. The spicing packed in quite the chilli punch and the biryani, though delicious, made me perspire like the Niagara at its most magnificent. Very different from the more demure biryani of Kolkata that I have grown up on and which is comfort food for me. The Shah Ghouse Hyderabadi biryani would be more a one off dalliance for me and I did step out feeling rather pleased with life.

I did get the rest of the biryani back for my mother in law in Mumbai, who loves the Mumbai biryani, and got a vegetable biryani for her too. Unlike the mutton biryani which was served to me promptly, the vegetable biryani took a while to be prepared and brought. I was possibly the first person in a decade to order it seemed and perhaps they had needed the time to scout for the recipe at Shah Ghouse that afternoon!

My mother in law’s verdict? “Not enough masala and yakhni compared to our Bombay biryani.”

And so, continues the great Indian biryani debate. 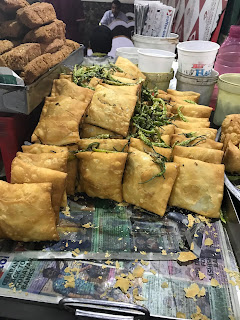 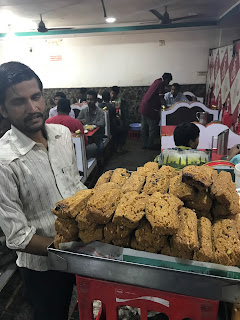 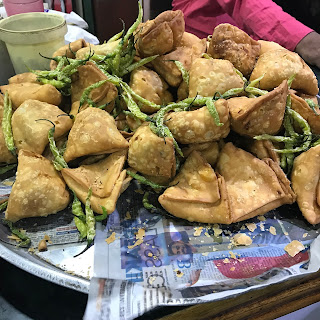 Do watch, a video I shot at Shah Ghouse:

Do read: A post I had written in 2011 about my biryani explorations to Shadab, Cafe Bahar and Paradise in Hyderabad.

You can read about that and more in my book, The Travelling Belly too. Here's where you can purchase it

Notes: The mutton biryani at the old Shah Gouse was for Rs 130 in January 2018. With the vegetarian biryani and a bottle of water, my bill came to Rs 300.