The original text had first appeared on @thefinelychopped on Instagram and has been edited and updated the day after I first posted it.

It's evening in Kolkata now and the picture above made me remember my childhood days in Kolkata where I'd often have shingara and roshogolla in the evening at the porch of my maternal grandmother.

The roshogollas are the spongy ones of Bengal of course. Different from the pahala rasgulla of Odisha.

Then my brother was born, and once he grew up a bit and was around three years old,  he’d get this treat too. When he was little he’d have the crust of the  shingara as the poor/ pur (potato filling) was too spicy for him and I’d have it instead. Sometimes my school friends would drop by and my grandparents would get snacks for them as well.

The shingara and roshogolla would usually be served with muri or puffed rice to make it a complete snack with some ‘squash’ on the side. Usually orange, at times mango or lime. Mixed with cold water with the tiny Grundig fridge my parents had got with them from Iran. Later, when my mother took up an apartment for us, she’d serve it to us with bread too. Yes, shingara sandwich was a thing. As was the roshogolla sandwich!

Shingara is the Bengali name for samosas where the potatoes inside are cubed and not mashed and where fried peanuts are a must too. The filling has a slightly sweet after taste, which I am told by my friend Soma Choudhuri is more pronounced in sweet shop snacks in North Kolkata. I guess the presence of folks from East Bengal, who settled in South Kolkata leads to a more pronounced spice and chilli heat profile in the snacks sold in this part of city. In winter, cauliflower is added to the shingara too. Singara is the name of water chestnuts in Hindi I think and has a triangular shape similar to the shingara of the sweet shops.

I recently launched 'Chatting With Your Mouth Full with Kalyan Karmakar'. This is chat show using Facebook live where I plan to have freewheeling discussions on food with folks which other can log and listen to. Yesterday was the pilot episode where I spoke to my dear friend and food lover, Kaniska Chakraborty. I first got to know Kaniska through my blog and since then our families have become friends.

The topic yesterday was on the food of Dhaka which Kaniska is an evangelist of. During the chat, Kaniska told me that you get two types of shingaras in Dhaka. One made with potatoes and a mix of vegetables such as potatoes and peas and carrots and where the spicing is so heavy that you might think that you are eating a non-vegetarian dish. It has a lot of onions too which adds to this feeling. 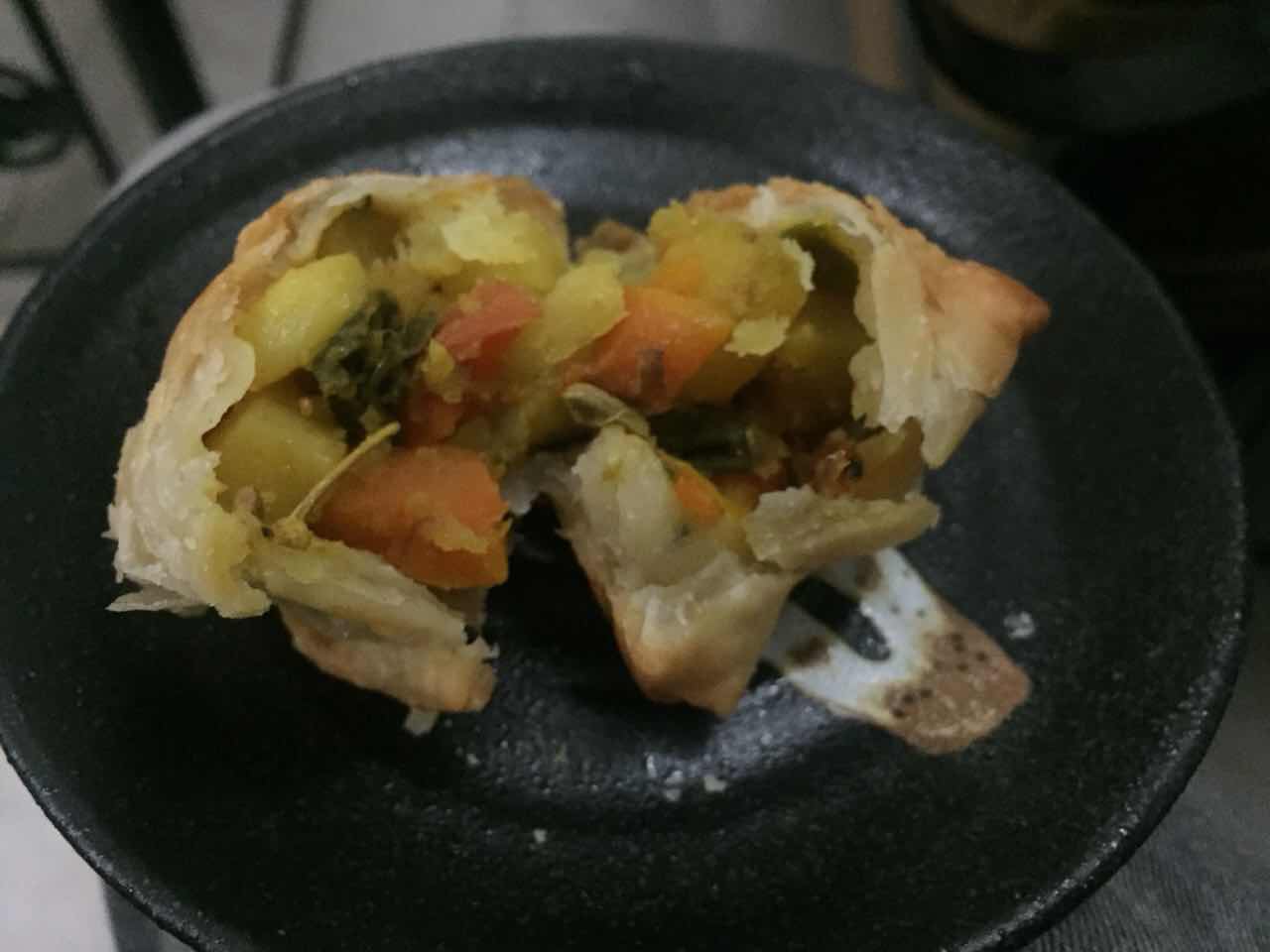 He said that you also get a shingara stuffed with finely chopped liver. You apparently get both in street-side stalls outside local markets.

It's really amazing to think of the many forms the sambusac of Arabia has taken in its travel towards the Indian sub-continent but that's a discussion for another day.

I took the pictures that you see in this post a few days back. This is when I was at my grandmom’s place in Kolkata for a shoot where I had to learn the making of a dish from my granny and replicate it for the audience. Once done with the shoot, Didu (my granny) asked me to get some shingara and roshogolla for me and the crew, i.e. the young producer and the client who were with me.

I went to the local sweet shop, Joy Guru Sweets and got the sweets. It's a typical neighbourhood sweet shop in suburban Kolkata. Nothing famous or legendary. Snacks such as the the shingara are fried in the evening. The sweets are covered with flies but the roshogolla is superb here and costs Rs 5 and Rs 10. In my childhood days in the late 80s, it used to be 50 p and Rs 1 in similar shops.

My two young companions, one a Bengali originally from Kolkata and another a Punjabi from Delhi, were most enamoured by the pots and pans in Didu's kitchen and the plates too and the massive black and now rusted pair of scissors which she once used for sewing clothes for the family using her sewing machine. They pointed out the Instagram-worthiness of the the grey cemented floor at her place and of the four poster bed.

They had bought the bed second hand my granny told me, when an officer in my grandpa’s office had retired. My grandparents  had brought all their belongings to Kolkata from Delhi when my grandfather had himself retired from his job in the Railways in Delhi.


‘How cool and vintage,’ exclaimed  my friends on seeing all of this.

I smiled in response to their reaction. This was my family’s history as preserved by my granny in her museum of memories.


The dining table on which I take the flatlay pics at her place and which you see on my Instagram feed? Well, it was not always white!

The table is older than me. It was apparently was bought by mom with her first salary as a college prof and before her marriage as my granny told me once. Years of it being mopped after family meals have made the sunmica patterns of the table white while my didu's soft, once unblemished, skin has got wrinkled over the years

On most days now, there’s only a lone diner at the table. My granny.

That evening, the four of us had a tea party. Didu loved the chicken sandwich I’d packed for her and for the shoot. We had the shingara and roshogolla.

‘So soft that it doesn’t feel like chicken,' she said about the sandwich. The chicken was shredded and blended with mayo by the chefs at the ITC Sonar and the bread was soft too.

And thus ended a day whose memories I will cherish forever.

Here's the link to the first episode of 'Chatting With Your Mouth Full with Kalyan Karmakar'. Hope you enjoy it.