Can we have some fresh thinking for breakfast please? An earnest call to the talented young chefs of Mumbai!


I called for a pack of multi-grain wholewheat bread from the local Baker's Dozen outfit in Bandra this morning using the delivery app, Swiggy. The idea was to get a freshly baked loaf of bread and without having to go out of home for it. Cost me Rs 100. I used two slices and put the rest in the fridge to use later.

I sauteed some sliced button mushroom with pink salt (someone had given me a shaker of it) in olive oil and then added a couple of crushed walnuts in it for good measure. I did this in the cast iron wok, that I had bought from the Mahalaxmi Saras Festival recently, as the mushrooms would cook quickly in the high heat. 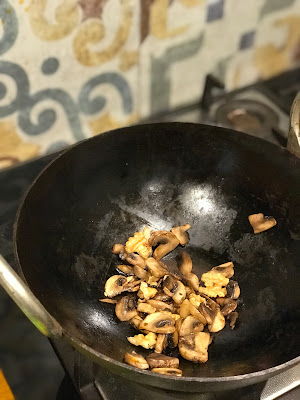 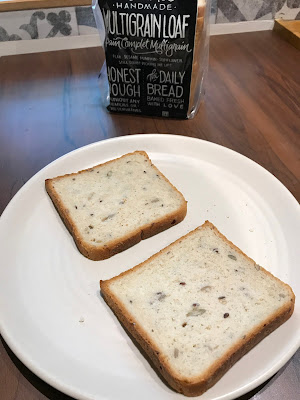 I then applied a layer of the celery and finely chopped chilli hung curd dip on two slices of the bread. We had bought the dip from Regal Stores at Bandra's Pali Naka this weekend,  On this I added the mushroom and walnuts.

My breakfast for the day was ready and it did taste rather good I must say.

Starting the day with a good breakfast is important to me and I was rather pleased with what I had made for myself. I also inaugurated the new white plate, that I had bought from the Fab India next door, in the process.

I plan to make my own hung curd spreads at home once the Regal dip gets over.

I made this breakfast in an attempt to cut down meat, eggs and cheese for a while in my diet to help my body detox a bit.

Now, you probably know that I am not a morning person and hate making breakfast and usually order in or go to a cafe for breakfast but therein lies a problem. Deprive them off their eggs menu and the only option most of the cafes that I frequent in Bandra offer in vegetarian options is granola with a very sweet curd mix or cold cereal like oats or cornflakes. Most do not offer sandwiches in the morning and if they do, there is hardly any which is without eggs or cured meats or cheese.

The only breakfast dishes that I know of around which fit the bill and which I like, among the  'regular' modern cafes (not Yoga House) in Bandra are the poha at Bombay Coffee House which is rather oily though and the moong dal dosa at The Village Shop. The Yoga House has some options including a less oily poha and the Taj Tea House has some perhaps. The Bombay Coffee House offers a spicy baked beans which is different from the much sweeter ones elsewhere and Eat Around the Corner has a nice foul madames (though I have not gone there in a couple of years) if you are fine with beans. I once tried the millets upma at SmokeHouse Deli but found it too tiresome to chew after a while.

There are the odd options at places such as Sequel and The Kitchen Garden Suzette which use avocados and stuff which make them fairly expensive.

What I do wish is that our chefs here show some some inventiveness and look at the local grains available, especially millets which are low on glycemic index, and seasonable vegetables and fruits.

I wish they would dig into our local traditions across the country, especially when there are so many vegetarian breakfast dishes around. Think the Maharashtrian baked multi-grain flatbread thali peeth  (not the fried ones of local restaurants) or the doi cira gur kola or Assam for example or the baked tandoor parathas of Murthal or ragi dosas of Karnataka and there is so much more. Our chefs can play with the variety of grains and produce available and come up with some dishes that cafes across the world would want to emulate I am sure.

They so deliver some pretty world class breakfast dishes when it comes to eggs, waffles, pancakes, baguettes and bagels and brioches, within the limitation of the produce available to them, after all.

A dish that I saw on the Soam Facebook page yesterday, and which I have not tasted yet (but then I like everything there), gives an idea of what I had in mind. A nachni (finger millet/ ragi) waffle topped with cucumber yogurt and an unripe mango salsa.

Trust the Gujaratis to think of this. The only problem is that Soam is not open for breakfast!

If you do know of cafes that are doing interesting breakfast dishes that are healthy and uses local grains and produce then do let me know about them as I would definitely like to try them out. 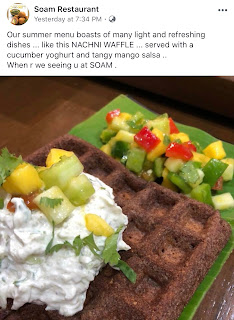