Not your average Mumbai restaurant experience. Getting to the meaty bits at Boteco, Mumbai

Strangers in the dark

After refusing to do so for the last couple of years, I finally listened to my ophthalmologist and agreed to wear glasses from last month. Reading glasses that is. Time to acknowledge the fact that one is four years into that stage of one's life where every doctor check up begins with. 'now that you are in your 40s....'

The last time I wore glasses was when I was in college. I hated it then and managed to cure myself of the positive power that I had thanks a doc in Kolkata. This time around I have to wear the glassed only while reading and writing and I have got sort of used to it. Plus K has got me a very cool and light pair and that helps.

I rarely carry my glasses out with me though and this was an issue when we went out for dinner a couple of days back. This is when we had gone for dinner to Boteco, a new Brazilian restaurant that has opened at Mumbai's BKC.

I do not know much about Brazilian food to be honest apart from the fact that is quite diverse and is known for both its seafood and its steaks. The latter is what drew me to Boteco though. Ever since I saw Kunal Vikayakar put pics of the some rather rare steaks on a stone grill from Boteco on his Facebook page, I knew that I had to go there. A picture tells a thousand words and stuff as they say. However, please do not expect me to conclude on the authenticity of what I ate at Boteco in this post. I am not qualified to.

Neither should you expect to be inspired by the pictures in this post the way I was by Kunal's and there is a reason for that. K and I had gone to Boteco for dinner unlike Kunal who had gone for lunch and we found that it was impossible to see anything starting with the menu. Both K and I had to use our phone torches to scan the menu and reach the meat. Add to that, I was not carrying my glasses and which made navigating through the menu tough.

Our phone cameras struggled too in the poor light. 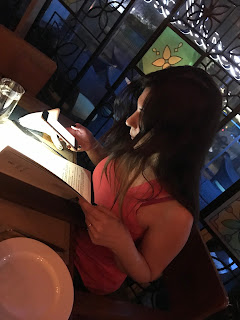 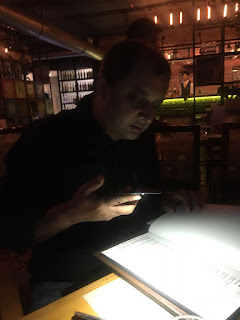 What were they trying to hide over there? There weren't any romantic coochee cooing couples around us for sure that night. There was a grown up Parsi lady in the table in front of us and her parents. A group of 4 friends in another and 3 guys in the third and one couple in the table behind us who too were focused more on the food than on themselves. None of us would have minded the light!

I did finally locate the Brazilian steak, called the carna na pedra here, on the menu and ordered it. The menu said so and the maitre d reiterated that it is served with a hot stone grill.

They give you thin slices of meat at Boteco which you place on the hot stone with a bit of oil on the stone first and the meat then cooks and it is up to you how much you want it done. I've had similar meals in Barcelona and at the Westview Grill ay the ITC Sonar in Kolkata. The meat there was sliced thicker than at Boteco.

The thin slices of meat here cooked very fast on the hot stone and I didn't keep them on for too long. As the slices were rather thin, the result was more medium than medium rare in a very short time itself. The latter is what I usually prefer.

The meat quality at Boteco was excellent and just a bit of sea salt was all it needed. The texture was juicy, the flavours were well rounded and, at the risk of sounding corny, made my tastebuds do the samba. Yes, yes that is corny I know but I did type 'goaaaaaaal' on my Instagram stories when I took my first bite here.

There was an option of sauces to choose with the steak and I chose blue cheese but didn't really dab the pieces of meat in it. That would do it disservice.

There was a nice leafy salad with it to refresh one's palate and some mind-blowing tapioca chips too. The cheese sauce was very well balanced. Not the excessively salty ones that some Mumbai restaurants offered.

For our starters we had pork sausage with cheese buns as recommended by the waiter and we chose this over the option with cassava fries. The sausages were made in house he assured us.

The tiny sausages on offer did have a nice grainy texture that reminded me of the butiffara that I had in Spain.

K loved the ones at Boteco too. I found them a bit dry and under-seasoned. I think Toast and Tonic  near by had done a much better job of their Andulasian sausages in the meal we had last August there.

The bao in which they were given was cheesy and very very hot. I mean mouth singeing hot. Possibly served straight from the oven. I thought that the combination worked better when the bao cooled down a bit and then its cheesiness helped push the meat along. At Rs 580 without taxes the best of deals unlike the Brazilian steak that was a steal at Rs 780. The latter is what I would return to Boteco for.

The not so good

What was rather disappointing, especially at Rs 790 (then add tax and service charges to this), was the Boteco Special Grilled Meatloaf stuffed with cheese and bacon and from the churrasequeria (charcoal grill according to the menu).

They had used imported meat here too but had grilled it so much that it seemed drier than the wit of Sir Humprhey Appleby (Yes Prime Minister) on a good day. Add to this the fact that the excess of what seemed like oregano just killed the taste of the meat.

There were many bowls of condiments given with the meatloaf but we didn't know what to do with them. We asked two waiters and they both smiled and said with Buddha like Zen, "you can mix them and do as you wish."

Mix what? Where? How? Then what?

Service is so important specially when you open a restaurant where patrons would be unfamiliar with the cuisine and that's where Bombay Canteen, O Pedro or even Bastian (when we went there ages back) scored. The waiting stuff knew the menu and was so forthcoming in response to our questions and that did add to our experience of the meal and to the enjoyment of it.

A foreign gentleman did walk up and smile and then went away. The chef or owner perhaps but unlike at Slink and Bardot where the chef came up and helped us make good choices, we had no such luck at Boteco.

For my choice of the steak that evening, I had Kunal's Facebook feed to thank for.

Plus two mains were a bit of a waste between the two of us though when we had asked the waiter, he said the portions are for one person. For a seventeen year old perhaps but I can't see any middle aged (I speak for myself) Indian have so much meat at one go!

Boteco has vegetarian dishes and seafood and chicken and stuff , but given how difficult it is to get something similar here, the carna na pedro is what I would ask my fellow steak lovers to go there for and it is what I would go back to Bodeco for too.

As do folks from the nearby American consulate as I learnt at a dinner a night or two later.

The meal cost us around Rs 2,400 with no drinks 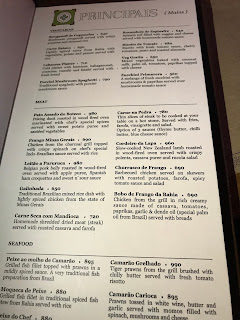 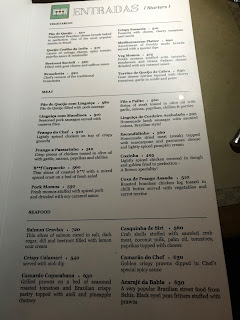 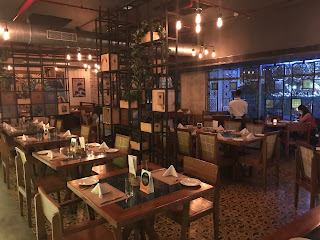 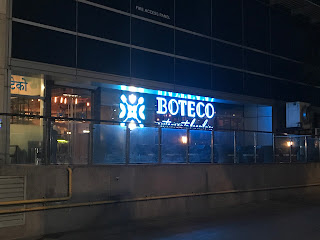 This. was an anonymous visit and we paid for our meals.

PS: I still prefer to give a disclaimer when we do not do the former but times change.
bkc Latin meat mumbai Mumbai restaurants reviews