Travel expands our bellies if not our minds. What happens when a Bengali mashes up flavours from the south & the north east of India. The story of the first ever rohu ghee roast.

As stereotypes go, it is said that Punjabis like to spend their money on land, Tamilians on gold and Bengalis on travel.

I confirm to the stereotype of my community.

On a separate note, you might have heard us Bengalis mock those belonging to other communities for their not being experimental enough with their food when they travel. The thepla carrying Gujaratis and the MTR boil in a bag pongal carrying Tambrahms are our favourite soft targets.

Now here's the thing, this image of the brave Bengali who travels with No Reservations is a carefully crafted culinary stereotype which is not entirely true though. The truth is rather inconvenient and different.

Let me give you an example of what I mean. I was at Vizag towards the end of the last year. It is a popular destination for tourists from Bengal I am told. On the beach I noticed guest houses set up for Bengali tourists. Emblazoned on them, in Bengali script, were the words, "Bangla khabar pawa jai" (Bengali food is available here).

So long and thank you for the fish

'Bangla Khabar' here is code for maachh bhaat, fish curry with river fish and rice, of course. Yes, the traditional Bengali tourist has always needed his or her share of maach bhaat while travelling. Most popular traditional tourist spots of India are known to have places which offer simple Bengali food for Bengali travellers.

The New Bengal Lodge near Mumbai's CST station had a mess on the terrace where we would go for Bengali food when I was new to Mumbai. We would be surrounded by boudis in maxis and dadas in white panjabis (kurtas) and white parallel ankle length pyjamas walloping away plates of machh and bhaat after getting off the from the Howrah Mail.

My late grandfather loved to travel and would stay in Railway or bank guest houses wherever he would go to. He would then go to the local market and buy fish, rice, dal and veggies for my grandma to cook. He refused to eat food cooked by anyone else and this was before the age of Air B&B and serviced apartments with kitchens.

I love to experiment with my food when I travel though and would urge you to do so too.

My lunch yesterday featured memories of both my most recent travels and the rui maach (rohu) fresh water fish that we Bengalis dote on. This, and the kaatla, which are now farmed in Andhra Pradesh in any case, is the one 'Bengali fish' that is likely to be available across the country.

Before our cousins from the east protest, let me quickly add that the Axomis, the Odisyas and the Biharis love their rohu too!

I had decided to make some of the rohu, which I had bought from Poonam at the Khar fish market, for lunch. I wanted something different though. Not the same old bhaaja, jhol, kaalia or doi maach though.

That's when I thought of using the Aruna chicken ghee roast masala pack that I had bought from the 94 year old Dwarka Prakash Mills at Mangalore.


I heated a tablespoon of ghee, Jharna ghee from Kolkata of course, in my cast iron pan  and added a liberal amount (4,5  teaspoons) of the masala into the pan.

The masala began to smoke on the high heat before I added some sliced capsicum and chopped aubergine to the mix. Once they got cooked, I moved them to the side of the pan and then added a teaspoon more of ghee and added 3 pieces of fish. I gently turned these around after 30 sec. The kitchen was smelling intensely of the masala by then. The dish took just a couple of minutes more to cook. 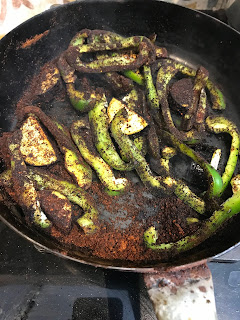 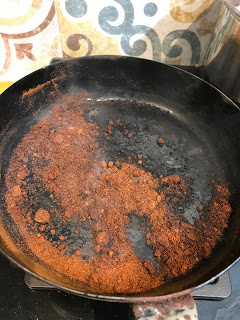 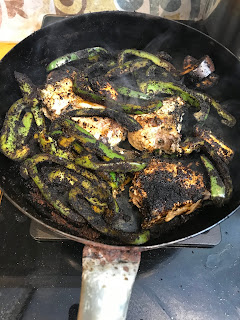 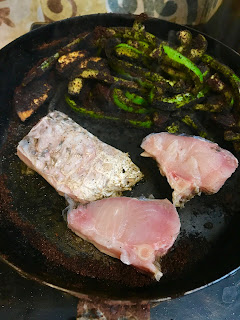 I had this with the black rice which I had cooked in parallel. We plan to try cooking it in a pressure cooker the next time as it takes quite a while to cook. Black rice is said the be native to Manipur. This one was grown in Jorhat in Assam though though by a company called AgrOrganic who had sent it to me to try.

The fish was cooked just right and was pleasantly moist inside . The masala was rather fierce but the nuttiness of the black rice balanced the taste. The capsicum and the aubergine added bulk to the meal.


You might look at the picture and think that the food was burnt but this was not so. It's just that the masalas had burnt a bit and that is because I had not added the copious amounts of ghee that a ghee roast calls for. Let's call it Ugly Delicious and leave it that till David Chang objects.

The great Indian mash up 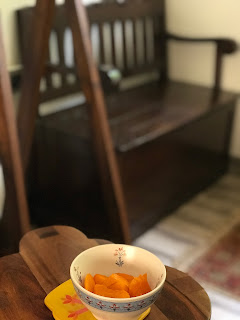 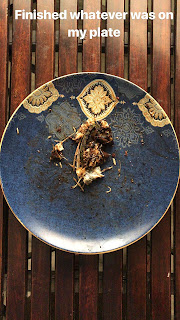 I cleaned up the plate at the end. My mouth was a bit numb from the spices and I had some chilled kesar mangoes from the fridge to set me right after that.

The mangoes are from the farm of a young chef and entrepreneur, Devash Jhaveri. The farm is in Valsad in Gujarat and he most kindly sent a big bag of mangoes for me. The cast iron wok is made in Haryana and I bought it from the Maharashtra Saras, a festival meant to celebrate largely  the produce of Maharashtra. The rohu was from the shop of Poonam, Sangeeta and their mom Hira Bai at the Khar Market. They are Kolis from Mumbai. The fish  has probably come here from Andhra Pradesh. The Bengali DNA in me craved for it and I bought it for my mother too along with some bhetki (from Jamnagar in Gujarat), pabda and tyangra. Bengali freshwater fish favourites. The use of black rice, a reflection of my love for the food of the north east of India sparked off by my recent trip to Assam. The ghee roast masala a reminder of the great food that I had in Mangalore when I went to the city on a food trip with Dr Pradeep Rao last week.

The meal is not the best dish to have come out of my kitchen I admit. However, I did wipe the plate clean and will give this recipe a shot again.

You won't get all the ingredients that I used in this easily to be honest. Plus here are things I need to correct in the recipe next time. I had used too much of the ghee roast powder and not enough ghee.  Given that I had starved the pan of ghee, I should have possibly added the masala after adding the fish and the veggies rather than the before to have prevented it from getting burnt. 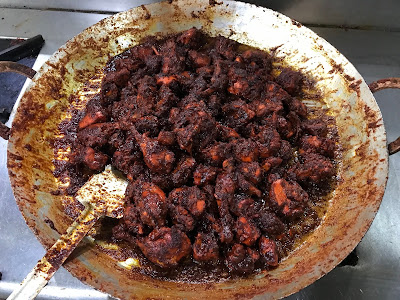 Given all these loopholes, why am I telling you about this dish you ask?

Well, remember that I did not say that I will give you a recipe here. I just wanted to show how it helps to open our minds when we travel.

It expands are lives and our bellies too as this Indian mash up lunch taught me and it sure was not the 'same old.'

PS: If my hamming in the kitchen doesn't impress you and you want an expert's take on it then this this is what Shobha Kamath, Pradeep's cousin had to say about how to improve this dish. She cooked us two fantastic meals at Mangalore and both featured ghee roasts so I would advise you to take her very seriously. Over to Shobha:

I would suggest that you keep the flame low, mix the ghee roast powder in water to form a paste (use enough water to make it a liquidy paste)  and then add it to the ghee. Let it roast on low flame till the raw smell goes. And then add the fish with a little bit more ghee. Cook till the fish is done still keeping the flame low.
*OR*
Or you can first rub salt and very little ghee roast masala on the fish, and roast the fish in ghee . Take it out on a plate. Then take some more ghee and add the ghee roast paste ( mentioned before), roast well on low till the raw smell goes and then add the fish you've already roasted in masala to it. Cook for another minute to coat the fish well with the extra masala.
This way your masala won't burn, fish will be coated well and cooked purrrfectly 😁