K and I dropped into Yauatcha at BKC this afternoon once we were done with some important work at an office close by. We were in a good mood and a good lunch seemed in order.

We had gone to Yautatcha for dinner in 2012 when they had just opened in Mumbai. Had a great experience then if I remember right. I've not been back since, though K has once recently when she had come for an office lunch and came home and praised the food.

We were walk ins but got a table quickly. The place was packed though and there was a happy buzz around. It takes a lot for a new(ish) restaurant in Mumbai to be full these days with so much competition and to me this was a sign of good things to come. Turned out that I was not wrong.

We got a table by the window which was nice and bright though I found the glare of the sun a bit sharp. On cue, it began to rain and it was just perfect after that. We skipped alcohol as we hardly drink and rarely do so in a restaurant. We'd rather spend our money on food. I was quite happy with the fresh orange juice that I had.

We were offered an exclusive 'vegetarian menu.' We shoo'd that away thought the ladies at the table beside us with their demands for tofu, long beans and mock meat would have taken a look at that I am sure.


We ordered a couple of dim sum dumplings to start as Yauatcha is known to be the place for them, though the menu here is quite extensive.

Why did I write 'dim sum dumplings?' Well, as I learnt in Hong Kong, dim sum refers to small plates served with tea. It needn't just be dumplings. Even ribs, feet (of chicken and not the diner), rice, noodles, cakes constitute dim sum. A bit like tapas in Spain.


I went for the shiitake dim sum which had a sticky but very thin and delicate casing. The finely chopped carrots inside, which were not part of the deal of you go by what was written in the menu, added a nice textural contrast to the skin. The problem is that they drowned out the fungus which was a bit disappointing. Shiitake can be so wonderful you know. Couldn't taste them at all. Not a promising start.


The stuffing of the prawn and pork sui mui (open topped dumplings)was delectably meaty though. The prawn and pork was minced I guess and had a slightly hard and compressed texture but had lots of flavour. We both liked this. As we had in 2012 it seems going by my blog post on that dinner.

After looking at the fish mains for a bit, I decided to go for the pork instead. I rarely eat pork these days for health reasons and usually stick to fish or chicken in non-vegetarian food. This seemed to be a place to indulge oneself with it though. We have had great pork dishes here, as well at their sister concern Hakkasan in Bandra, during our earlier visits. Both incidents were years back when they had just opened. Had they maintained their standards, I wondered.

There were two pork dishes on offer. Braised pork belly and pork ribs. Both would have a slightly sweetish taste I was told on asking by Swapnil, the young gentleman attending our table. The ribs are honey smoked it seems and the belly is made in plum sauce. Neither K nor I are too fond of sweet flavours in food but I decided to take a risk and go for the belly which I prefer over ribs. K said, "your call."

That is a tough call!

I am glad that I ordered it. The meat of the braised pork belly was truly delectable. Imported I am sure. Slow cooked and finished in the kitchen once the order was placed I reckon, as unlike the dumplings, this took a while to come to the table. The meat was very tender and was served thinly sliced. The pieces had a thin rim of fat and was more meat than fat overall. Yes, the sauce was a bit sweet but we had the slices of pork by themselves and didn't take any extra sauce from the bowl so it was fine for me though K still said she would she would have preferred it less sweet.

Still find it sweet, then add the burnt chilli oil served on the side is my advice.

The pork, at around Rs 2, 200 for a plate, was about half the cost of our bill of Rs 4,500 with no alcohol or dessert. It had about 6 slices which would make it roughly Rs 350 a slice. Whether you would want to spend so much is a personal call but then this is a fine dining place and honestly that is not how one should look at a dish here.

What one needs to factor is the excellent quality of the meat, the cooking prowess and the training  behind it that helped create this dish. The rigour in the kitchen that ensures consistency. The equipment used and the time involved.

Then you look at the amount you are willing to spend and make your choice.

The way I would see it is this: If I was my ten years younger self wanting to get a taste of international food without having had opportunities to travel that much, then this is a dish I would consider saving up for.

If I look at the today's reality of my slightly middle aged self, where pork is meant to be a very very rare straying into forbidden place, then the pricing insured that I'd feel very satiated after three slices.

Either ways, it would be a rare indulgence, meant for an occasion worthy of it. This was one.
Incidentally a plate with 2 to 3 slices would have qualified it as ‘dim sum’ too if you refer to my earlier take on this.


I was going to order steamed jasmine rice with the pork when Swapnil very strongly recommended that I go with the egg fried rice instead. I was not entirely convinced about this but I listened to him. I am glad I did. This was not the oily deep fried fried rices with basmati rice that we get in Chinese restaurants here. This was made with short grained rice , which was neither too firm nor too soft, instead and which was just perfect to mop up the pork with. Very Cantonese I guess,

They small bowls to have the rice in and that's how rice is eaten in China I am told. A small bowl of it at the end. This ensures that you have more of vegetable and proteins and soup in your meal and very little rice. This helped me limit my intake too. I packed the rest and took it home. It was too good to waste.

K and I were both happy with the overall experience. The lunch experience matched up to our happy mood. The food was pretty good too. And the service lovely. It was good to come across someone like Swapnil who knows his stuff and has a point of view on what you should eat. 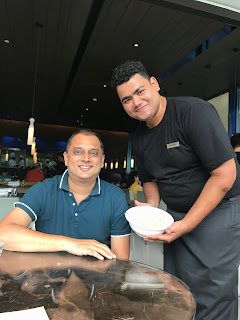 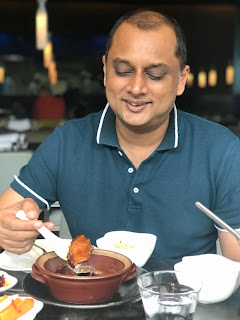 As you might have noticed, I rarely eat out when In Mumbai these days as I do not want to subject my body to food which mighr not be good for me and which might turn out to be mediocre. Which is why I stick to the tried and the tested, where I can trust the food, when I go out.

No regrets here at Yauatcha today. If I was into rating places then I would give today's lunch a big smile. It was worth straying a bit.

So, to sum up, if you want to have a blow out, good quality, Cantonese meal in Mumbai then Yauatcha remains a good bet is my take.

PS: I realised that I hardly post here about restaurants these days and that I usually do so on Instagram instead. Thought I'll change that when I come across something new or different from the usual and worth telling you about. Hope you liked reading this.

1. When we went Yauatcha in 2016
2. Are all dim sum dumplings? My take in NDTV Food
bkc chinese Fine dining mumbai Mumbai restaurants