I had one of the nicest prawn dishes that I have had in a long, long time during my recent visit to Nara Thai.

Nara Thai is a reasonably new Thai restaurant (estd 2017), located in Mumbai's BKC. We happened to be be at BKC on work and decided to drop in at Nara Thai for lunch and this is an account of what followed.

Nara Thai belongs to the same group here that also runs Yauatcha and Hakkasan.  The restaurant has an outdoor and an indoor section, we decided to sit in the the latter. It was a weekday, the restaurant was fairly full. The crowd indoors seemed to be elder than that outside and there were some kitty groups too.  The noise levels were fairly ambient even though the space was not very big and even though most tables were occupied. Luckily we got a table despite being were walk ins. The website says that they prefer people to book and come.

We started with the river prawns with garlic (goong tord kra triem) and this was the dish that I was referring to at the start. Six large prawns. Served with tails intact. The cooking of the prawns were just perfect. The prawns were not overcooked. Nor were they raw. The doneness level was 'juicy.' The seasoning was perfect.  The inherent sweetness that one associates with river prawns shone through and spoke to my Bengali heart. Unlike the way they are served at some places in the far east, the prawns were deveined the way we like them to be in India.

The prawns were served on a bed of crisp fried finely chopped garlic and the combination of the two was the stuff great love stories were made of.

We tried the Thai omelette with crab meat (kai jiew nua phu) too. The texture of the omelette was lovely. Not too hard. Nor spongy. Sorry about that, but 'juicy' would be the word I would use once again. The portion size was rather big for two. I had a slice with steamed rice and added a dash of fish sauce with finely chopped red chilli, a sort of prik nam pla, that I requested for. The seasoning was perfect here too however we both felt that the flavours of the egg completely dominated that of the crab. We packed half as it was too much to have at one go. It's a four person dish in my opinion. 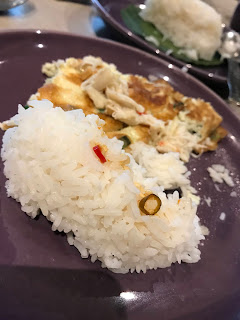 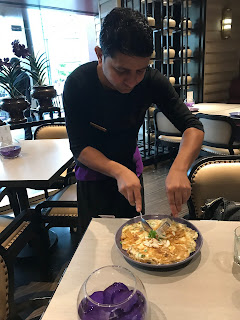 Our other order for the mains was the Thai red curry (kang pa nang) with chicken, which very few places in Mumbai get right. I was very happy with the curry at Nara Thai on two counts.


Firstly, the consistency of the curry was thin just as one has experienced in Thailand and loves. Most places in India tend to make the Thai curry disappointingly thick and stodgy. No such problems here.

The second reason was the way chicken pieces had been cooked. They were slices of chicken breast and yet were quite tender and not chewy at all. That's rather rare in Mumbai for dishes with chicken breasts and I found this to be very commendable.

I had the curry with jasmine rice. Turns out that they have brown jasmine rice on offer too but I stuck to white. The portion size was 110 per cent of what I would have needed. Which I think is fine. The rest of the food was enough for two.

Well, I had my trusted fish sauce dip to spike things up with the curry at Nara Thai and would rather save my tears for better things! Jokes apart, I'd agree that the red Thai curry that we used to order a few years back at Thai Pavilion, Mumbai, and at the (now shut) Spices at JW Marriott, Juhu, had a stronger flavour intensity.

Overall, I was quite satisfied with the meal. The service was fairly competent though nothing memorable. The young gentleman taking our order was not very loquacious. However, in the best traditions of Thai restaurants in Bangkok, the menu had pictures of the dishes on offer displayed. The menu was fairly traditional, so folks reasonably well acquainted with standard dishes wouldn't really be at a loss.

It would be fair to say that we were happy with our choice of restaurant and the meal that followed. Lived up to our mood that afternoon.

1. Costs: A fresh lime and the meal above came to Rs 3,100 with service charge. The cost of the prawns on the menu was Rs 1,300 out of this. We could have done without the omelette in retrospect.
2. Seating was comfortable. Aircon worked fine. Toilets clean and posh and rather spa like.
3. Address: Ground Floor, Raheja Towers , Near Dena Bank, Bandra Kurla Complex, Bandra, East, Mumbai, Maharashtra 400051
4. We paid for our meal, the visit was anonymous though the general manager recognised us midway through the meal from a restaurant he earlier worked in and where we are regulars.
bkc Mumbai restaurants thai