A fresh chapter in the story of Desi Chinese? What to expect in Hakkasan India's newly launched 'only at Mumbai' collection.

on September 21, 2018
"You are very Chinese," said the ever smiling chef Raymond Wong of Hakkasan Mumbai, when he heard my reactions to the 'only at Mumbai collection' that they are about to introduce at the restaurant & whose tasting I had been invited to last evening. The idea I am told is to use Hakkasan's cooking techniques but bring in a higher proportion of ingredients local to markets where they are based, in these dishes. An idea which made a lot of sense to me given that Chinese cooking does believe in using local and seasonal ingredients too from what I understand.
My favourite by miles at the tasting last night and what I am dreaming of today too, was the noodles stewed in 'superior stock'. The stock used chicken bones and feet and was reduced to half over 6 hours the chef told me. The flavours in it were phenomenal and rendered the king prawns on the side of the plate superfluous in my opinion.
I loved the braised goat meat too. Cooked again over 6 hours using a variety of techniques at each step. It has to be one of the best renditions of Indian goat meat that I have had anywhere and across genres in terms of its smokiness and meatiness and layered texture.
The village style sliced chicken, steamed in lotus leaves won my heart too. I had earlier told the chef about how I had enjoyed eating chicken feet dim sum at Tim Ho Wan in Hong Kong. He later smiled and said, "I knew you would like this when you told me that you had liked chicken feet." I loved the texture of the chicken and the clean flavours of the jus.
These are the three dishes which best did justice to the chef's skills in my opinion.

The roast duck cooked slices of alphonso mango and lemon sauce was just the salve I needed after tasting the rather spicy tofu and then the spicy sauce served with soft shell crabs that I had at the start of the meal. The duck was beautifully cooked and took in the flavours of the mango and the mango slices gave a very strong flavour contrast and sugar rush which was balanced by the meatiness of the duck.
There were some dishes which were made with the belief that "Indians like spice," and those didn't excite me. The crunchy tofu and the kokum prawns with loads of chilli for example. Or the crab rice Madras curry powder. To me they smacked of desi Chinese but I am told that most guests who have tried it love the chilli punch.
The prawns in the both the prawn dishes that I tried were a but tough to cut but I guess it a matter of time before the chef gets as comfortable with the local prawns as he has with the goat, duck and chicken here.

They have introduced Indian flavours in the cocktails too! Their bars manager for Asia, Mathew Hall, who is based in Shanghai, had come Mumbai to work on these cocktails. He had gone to the local spice markets for inspiration.
I was intrigued by something called the 'biryani martini' and tried it eventually. It seemed more a Karan Johar Punjabi wedding sequence thandai to me than something Mr Bond would like but hey I am not much into cocktail to start with. The balance of ingredients showed admirable restraint but it just wasn't what I had in mind I think of a martini. 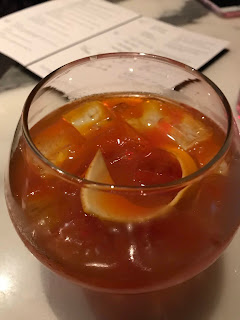 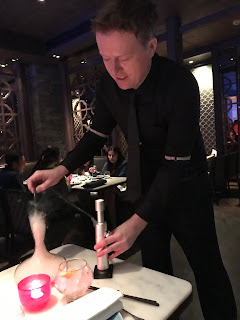 However, the smoky saffron negroni with turmeric infused gin, saffron, Campari nd sweet vermoth, which was smoked and served, did have a certain dry intensity to it which I feel could make it feel at home at some of the swank piano bars in Hong Kong, Singapore or Tokyo which I have been to. 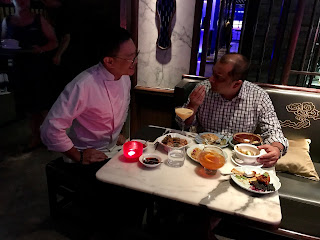 Desi Chinese?
Well there were shades of it in some of the dishes and I guess that would bring in those who want a fiery punch in their meals. However, I did find the use of local ingredients in some of the dishes by the chef sticking to his native cooking techniques quite interesting and the resultant dishes, appealing.
Guess it is a bit of mixed bag out there.

Note: I was hosted in the dinner and the pics are of tasting portions
PS: This is the link to a post I had written long back when Hakkasan was new to India. We had quite enjoyed that meal.
Asian Bandra chefs chinese hosted Mumbai restaurants