on September 29, 2018
Lunch this Friday challenged a lot of pre-conceived notions of mine.
I had gone to the new Punjab Grill branch at Mumbai's BKC, which I had been invited to check out. Punjab Grill is a chain of upmarket restaurants serving Punjabi food as you might probably know.
I can't say that I was very excited about the prospect of this when I had set out of home to be honest. Posh Punjabi restaurants conjure visions of places with heavy tapestry and heavier chairs and cutlery, surrounded by shades of brown and purple and often with very little sunlight coming in, in my mind. Plus, plates of endless and monotonous tikkas, tangdis and bowls overflowing with heavy monochrome curries, laced with swathes of cream.
Just not the sort of meal that the middle of a very busy day which I was in the middle of demanded.

I was in for a surprise when I walked into the restaurant at around 2.15 pm though. Punjab Grill is located at the Capital Building in BKC which possibly houses as many new restaurants as it does offices. I felt 'surprised,' because the interiors were anything but over the top or dour unlike what I had expected. It was cheerfully bright inside instead with ample natural light streaming in. The furniture and lights gave the restaurant the look of a classic European tea room. One whose time has not gone by that is.

I was supposed to try out some of the signature dishes of the restaurant. Instead, I said I would like to order the sort of dishes that fit in with my attempts to eat light these days. What I call my #LittleJackHornerMeals. Moreover, I had passed by a bank that was a client of mine during my market researcher days, on the way, and was feeling a wee bit nostalgic then. There were no restaurants at BKC back in the day. If there was, I would have definitely liked to have the sort of food in one on a working day which would not make me look for a couch to nap on when I went back to office. That is the sort of food that I wanted this afternoon too, instead of fully loaded gravies and curries.

The starters that I chose offered just what I had in mind.

The tandoori salmon, made with Norwegian salmon, was delightfully juicy. I was intrigued to see if the use of local spices would smother the taste of the fish which would be a shame given how expensive it was. That was luckily, not the case. A marinade of honey and sweet kasundi (mustard) sauce had been used to elevate its flavours and the occasional taste of saffron was just the touch of subtle royalty that the visitor from Scandinavia deserved. Kasundi and mustard are what I use as a marinade for chicken wings that I grill in the air fryer at home too and I could relate to what the chef had done.

I had ordered the quinoa methi tikki too, though I wondered if there was any point in having a deep fried version of these healthy grains. However, the tikki was shallow and not deep fried here. The texture was moist and flavourful and the spices sat naturally on this grain which is alien still to our palates. The methi added a nice layer to the taste. It was the nicest of rendition of quinoa, a grain I have never liked till today, that I have ever had.

The other starter that I had was the low GI (though high carb) sweat potato or tandoori shakarkandi. They had steamed the sweet potatoes here. Steamed, baked and roasted and in small quantities (as they are carbs) is what my doc says is fine for those who are diabetic or pre-diabetic (which I have recently discovered I am). By adding chaat masala and pomegranates, and with the nice texture that they had arrived at, the chefs had done great a job with the sweet potatoes and the tandoori shakkarhandi was so delicious.

I had asked for tasting portions so the portion sizes were smaller than normal but I loved the chopping board plating of the dishes. This was food that tasted familiar and yet was served in a hip bistro like format which looked most appealing to me.

I met Chef Dipender Singh at the restaurant who, among other things, told me about how they focus on creating stocks, chicken stock with chicken feet and mutton stock with marrow bones, by slow cooking them for close to three hours. These are then added to the meat dishes to bring in flavour intensity without having to take recourse to adding cream or crushed nuts to make them rich as is often the norm at Punjabi restaurants. He also told me that they while they were using cooking techniques and spices typical to Punjabi cooking, they had introduced seafood and grains and millets which today's audience looks for in their pursuit for healthier eating.

The magic of the stock shone through dishes such as the mutton paya shorba as well the dhaniya mirch da kukkad (chicken curry), where the flavours were silken and subtle and the dishes not heavy on the stomach.

Keeping my #LittleJackHornerMeals initiative of light eating in mind I ordered the masala karele (bittergourd) as karela is supposed to help fight diabetes. They have scooped out the karela innards and have the stuffed the grilled outer layer with a sauteed mince of the inner flesh and even the seeds of the bitter gourd. The karela was served on an 'achari' curry and the mustard and tangy base of this was the perfect counterpoint to the bitterness of the gourd to make this a very pleasant dish.

I was excited to see millet based rotis such as jowar and bajra ones and ordered those along with the missi roti which is made with a mix of besan and flour. This worked for me rather than my having to call for full flour rotis or rice based dishes. While Punjab today is a wheat consuming state, the chefs at Punjab Grill seems to have kept in mind that many of us today look for grains such as millets which have a low GI. The rotis tasted quite nice and had a nutty texture and were slathered with ghee.

For those fine with dessert, the phirni is light and runny and not too sweet and the kalakhand is syrupy, sugary and sinful. They have full blown Punjabi curries too for those who eat with no boundaries put on them. They have a buffet option on weekday afternoons which I thought was good value for the office crowd here.

As for me, I found enough to eat and rather happily too, at a place where I was earlier not sure if I would be able to do so. 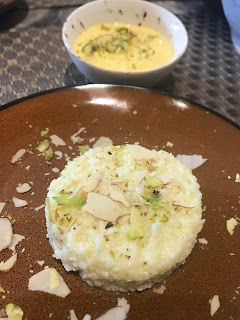 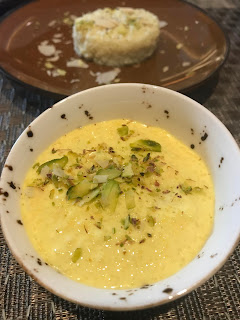