Last train to Tsukiji. A trip to Tokyo’s oldest fish market as it gears up for its relocation 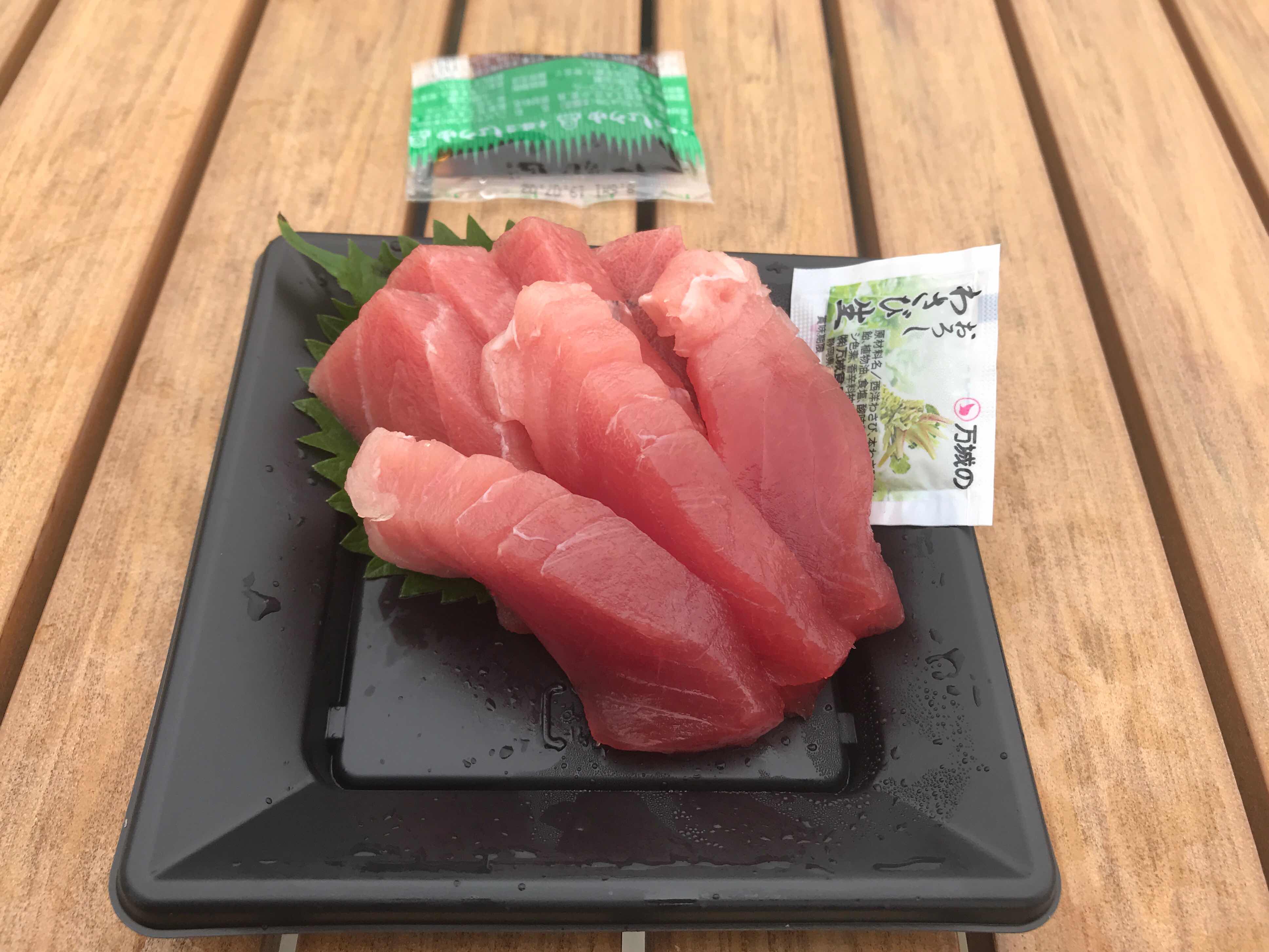 There are two types of travellers in this world.

I am the sort who lands at a place and lets things fall into place and takes thing as they come. I ask locals around me about what to do. Or post on social media and get suggestions on where to go and am happy with that. Food is what interests me the most. And the people behind it.

Then there’s K, who plans and researches every bit of a trip and that’s what she is doing even now in our hotel room while I blog. I admit that it’s thanks to her that we’ve found lovely hotels to stay in, over a number of trips, among other things. And been to museums and places of historic interest.

You could of course say that I am lazy and know that I have her efforts to fall back on, but in all fairness, this is how I am on solo trips too.

I must admit that K’s love for research came especially of use in Tokyo today. Let me explain why.

It is thanks to her that a memorable expedition to the Tsukiji Market after all. I had always thought that Tokyo’s legendary Tsukiji fish market was all about the early morning auction and didn’t plan on going there this time as that seemed to be too much of an effort.

Thanks to the fastidious research done by the missus however, we figured out that like the Sydney Fish Market, Tsukiji too has a retail section which is open during the day and also had an ‘outer market’ which has tons of food stalls. We took the metro from our hotel and reached there easily at around 1 pm today. 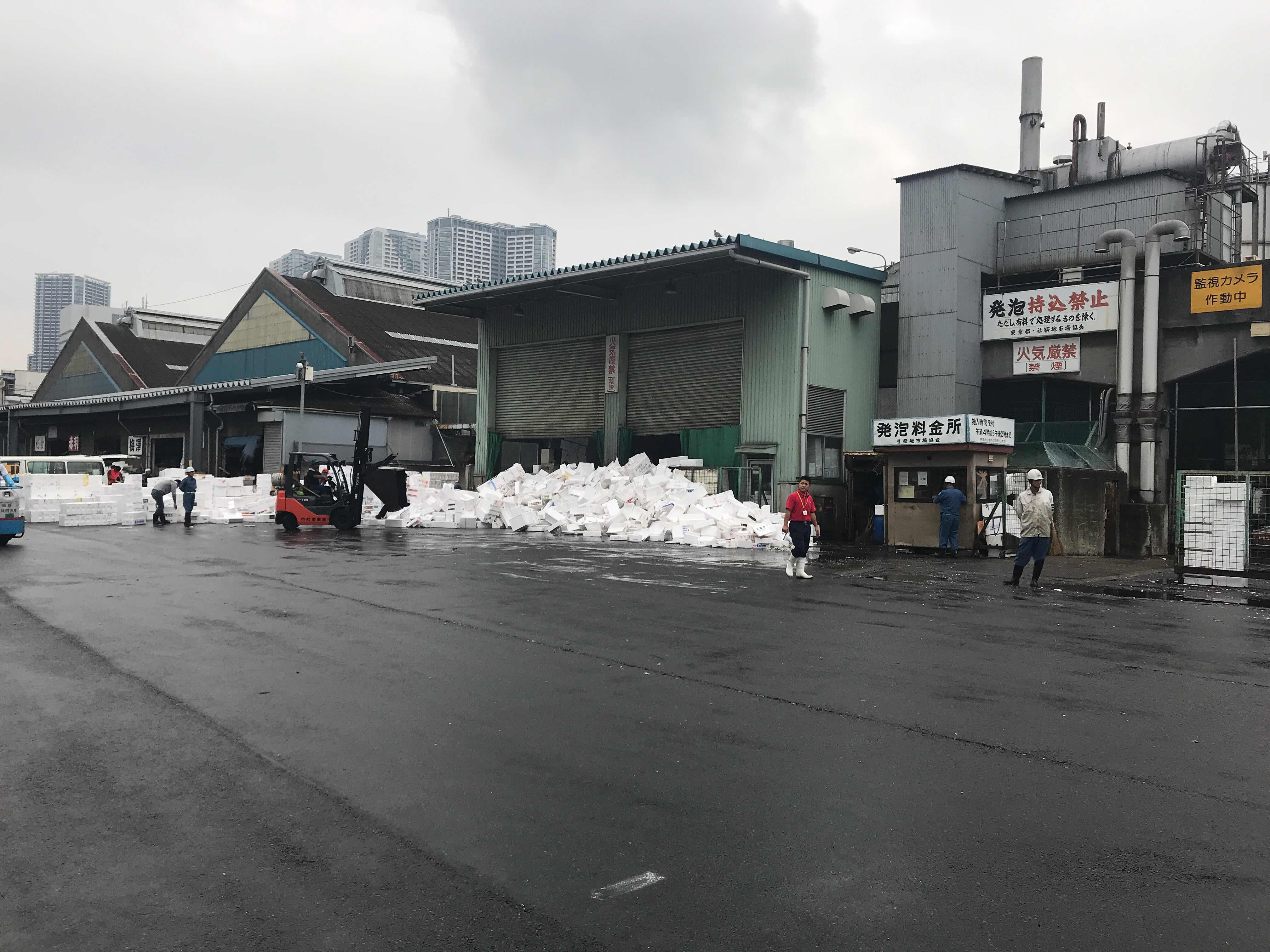 Directions from a lady in the enquiry counter pointed us in the direction of the main market. The Mumbai’s Sassoon Dock-like fishy aromas, or stink if you must, of the place told us that we had reached when we came across it.  The day’s business was over and trailer trucks were clearing the garbage. 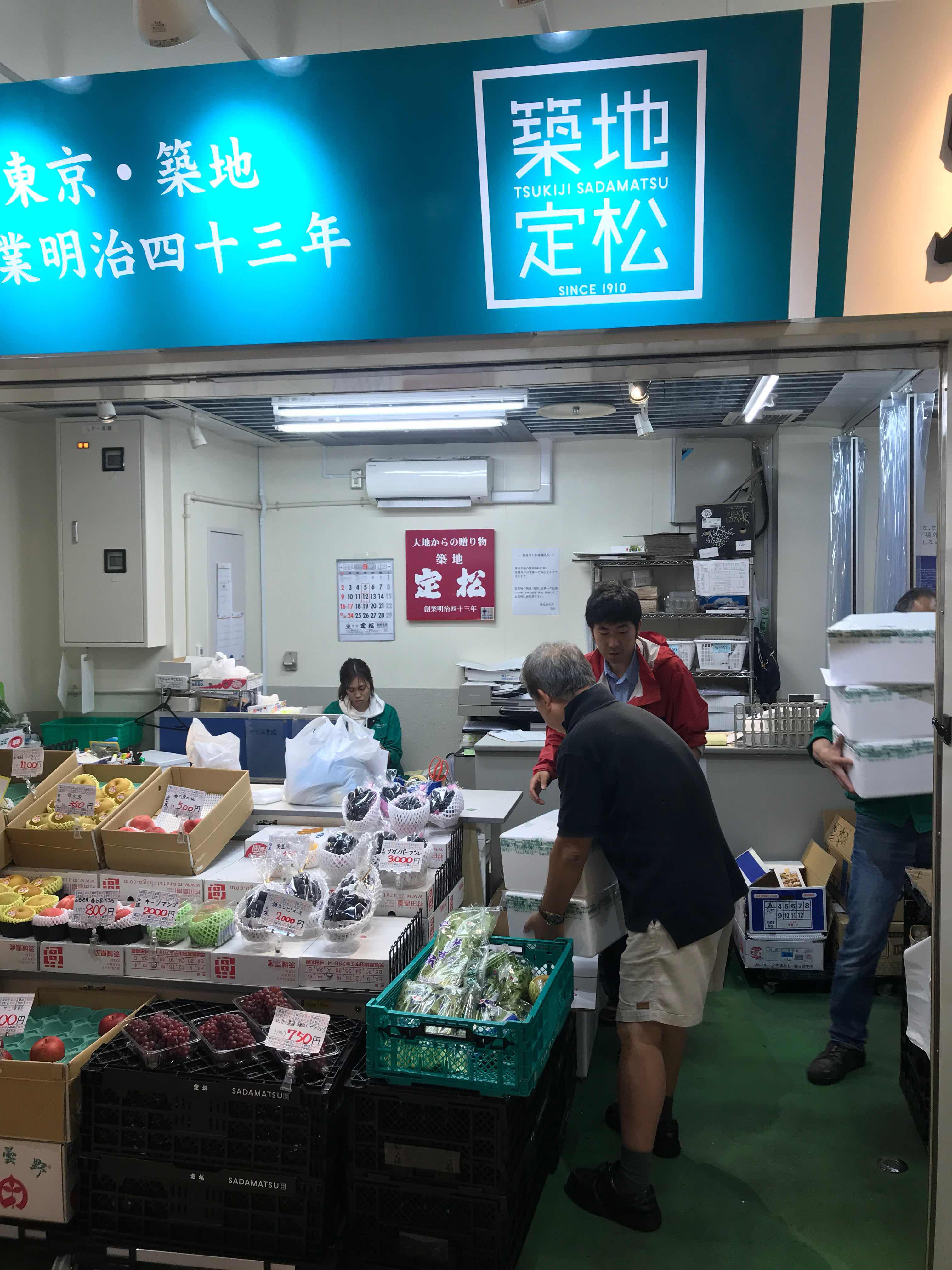 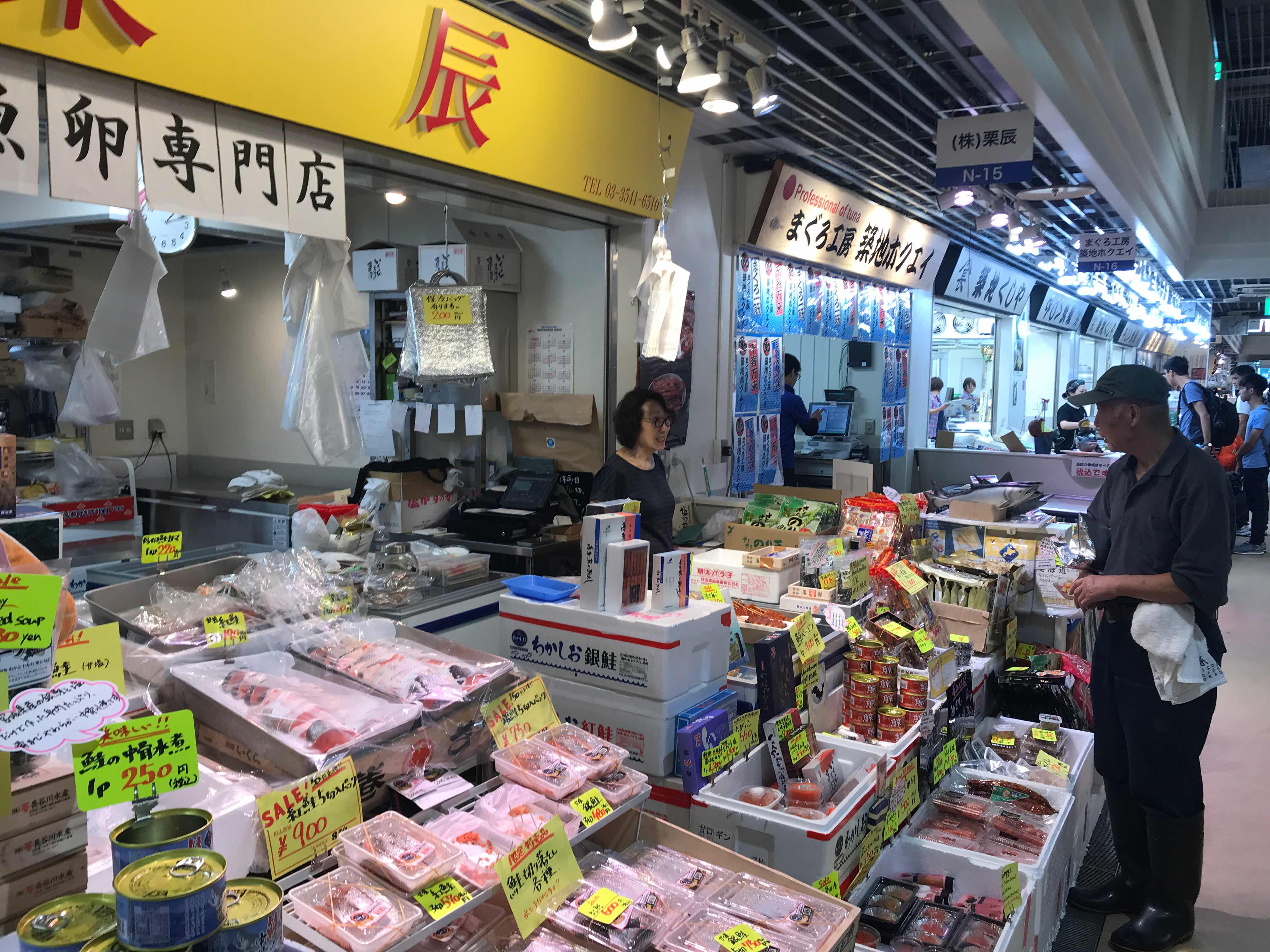 We went to the retail market located in the found floor of nearby where visitors can go and buy fish in the ground floor and fruits too. All the signs are in Japanese which makes everything a bit tough.

I must say that going to to this market was as close to experiencing Tsukiji as going to the museum shop at The Vatican, rather than going in to the see the Sistine Chapel,  was. This was no comparison to say a La Bouqeria in Barcelona and I think even our Indian fish markets in places like Kolkata and Mumbai can be exciting but this was air-conditioned and not smelly.

I did the Buddhist thing and decided to savour the present and live in the moment rather than think about what could have been, and we did that rather literally and had a gala time spent with some delicious food. Enjoy it for what it is and don’t think about the wholesale market and you will be good. According to a report in the Japan Times, while the wholesale market is relocating the next month, the retail and outer markets will remain where they are. 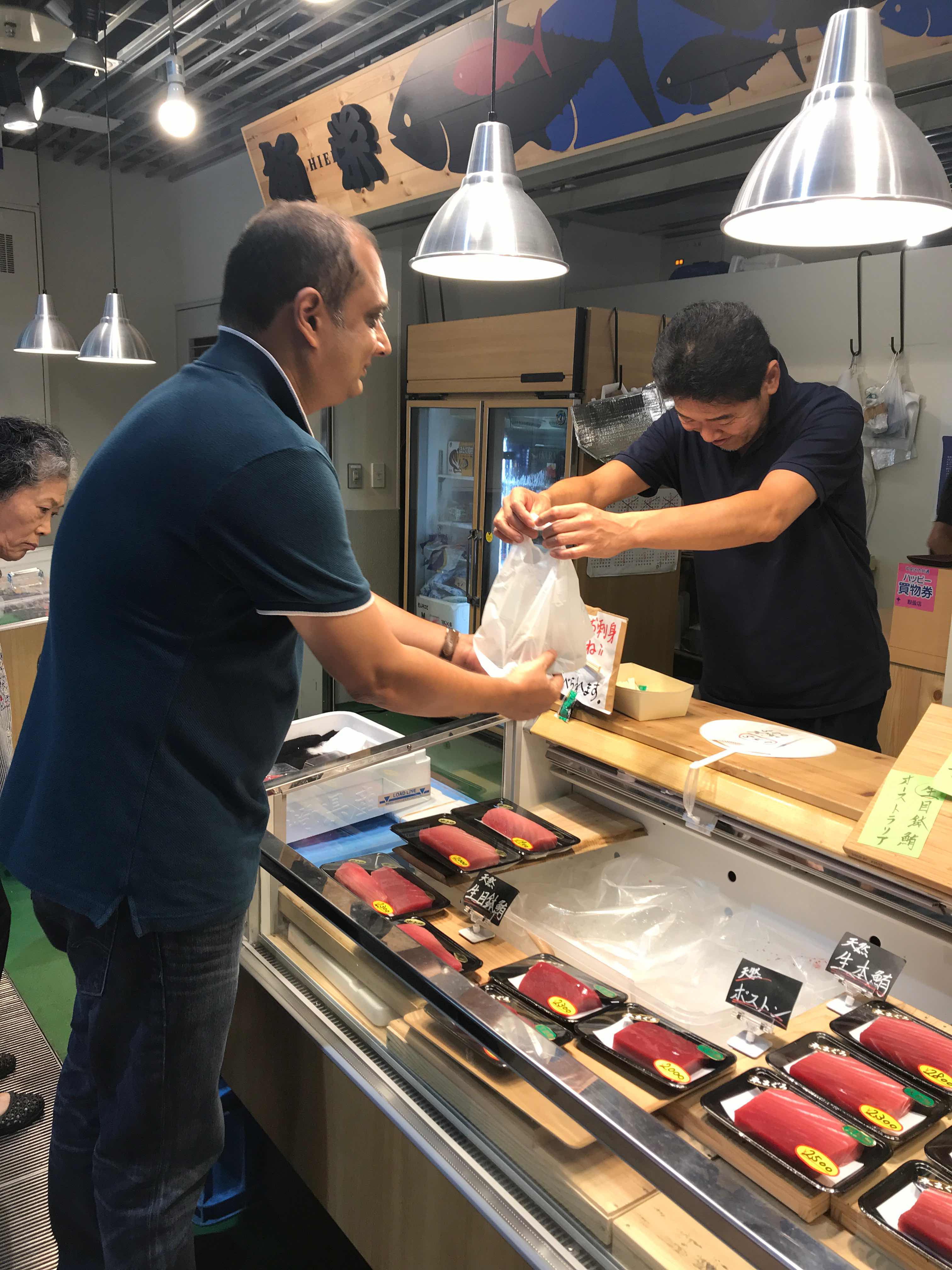 I bought some tuna sashimi at one of the shops and went up to the terrace on the third floor, the ‘resting area’, where you can eat. The fish was juicy and fatty and very fresh.

We then headed to what is called the outer market. A street packed with food stalls and restaurants. I had my first taste of sea urchin (creamy and intense bordering on bitter) which was served along with very expertly grilled scallops which were not overdone at all. 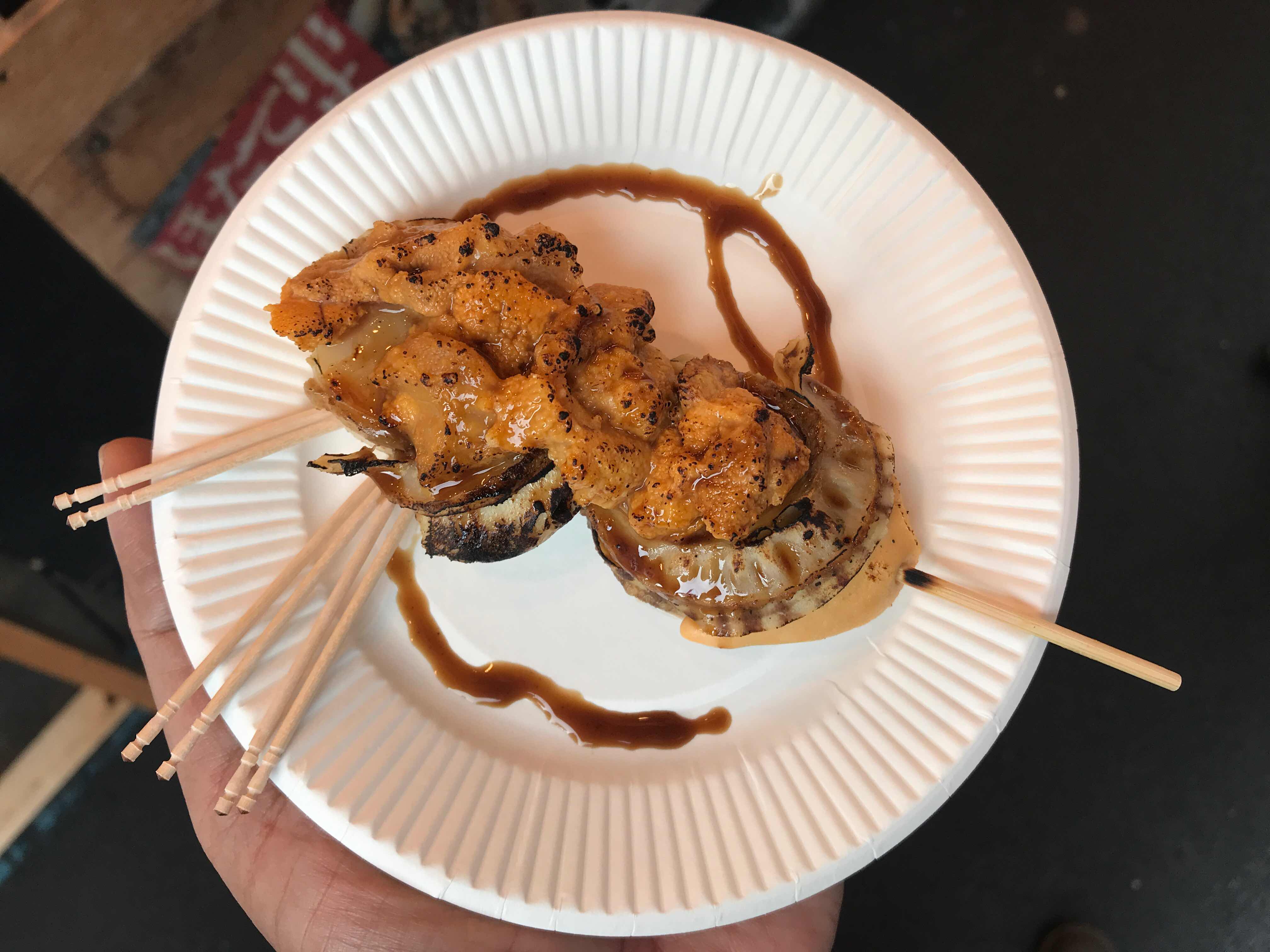 Neither was the broiled octopus at the stall in the next counter overdone. For once in my life, I had octopus which didn’t taste like boiled rubber and was packed with flavour instead. I don’t think that I’ve ever enjoyed octopus in my life before this. 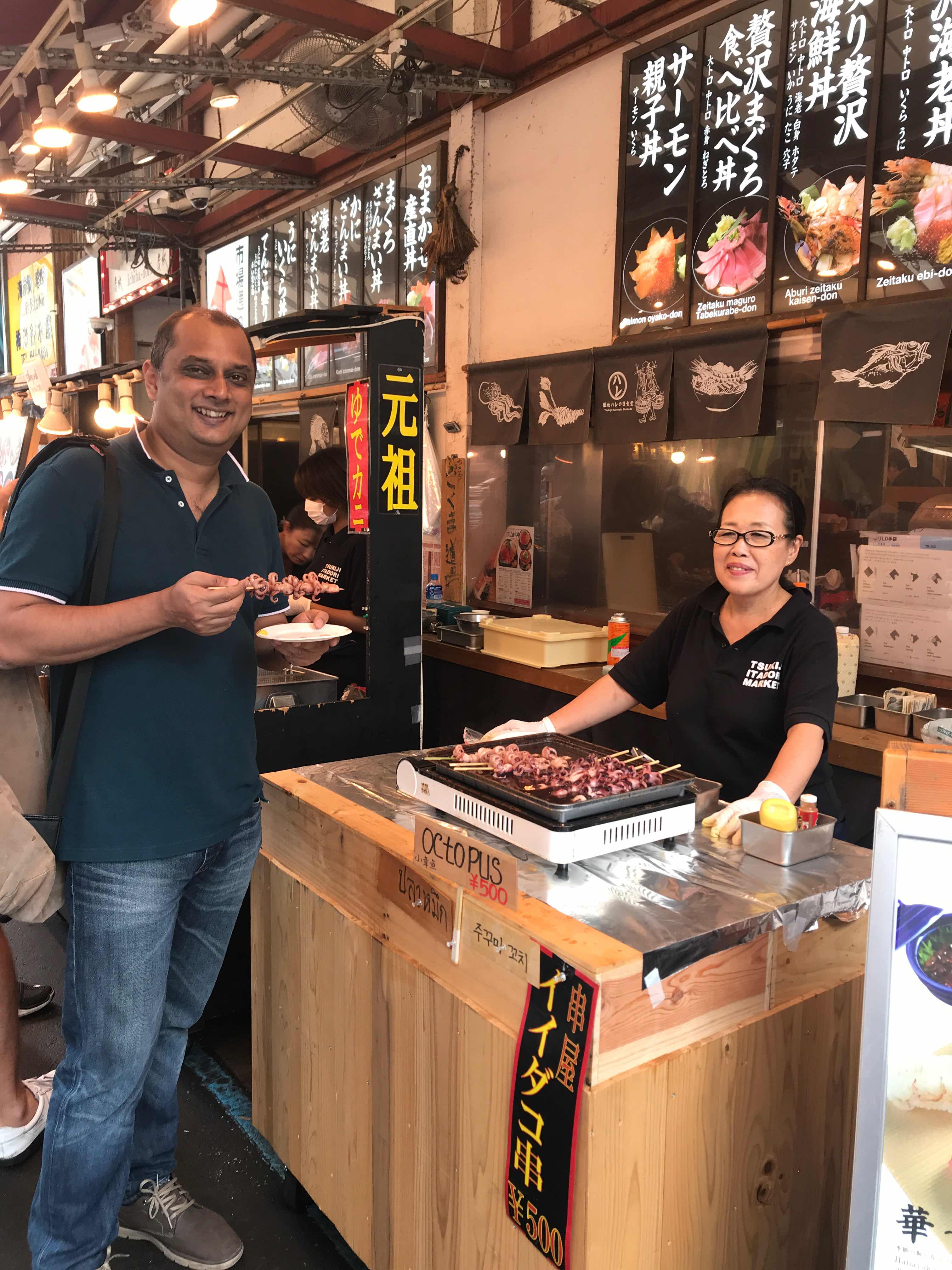 We earlier saw a queue in the corner of the outer market and had joined in. This was at a stall where Japanese omelettes were on offer for all of 100 yen each to start with. I saw the chef put in an orange coloured liquid in a square baking tray a hob and then wait patiently before the eggs began to form. He then flipped these and the omelettes were soon ready. He cut chubby slices from large sauté and put each on sticks. I can’t tell you how astonishjngly moist and yet firm it was. I think the mix possibly had a sauce like miso in it which balanced the edginess of the omelette to make it a true flavour bomb. 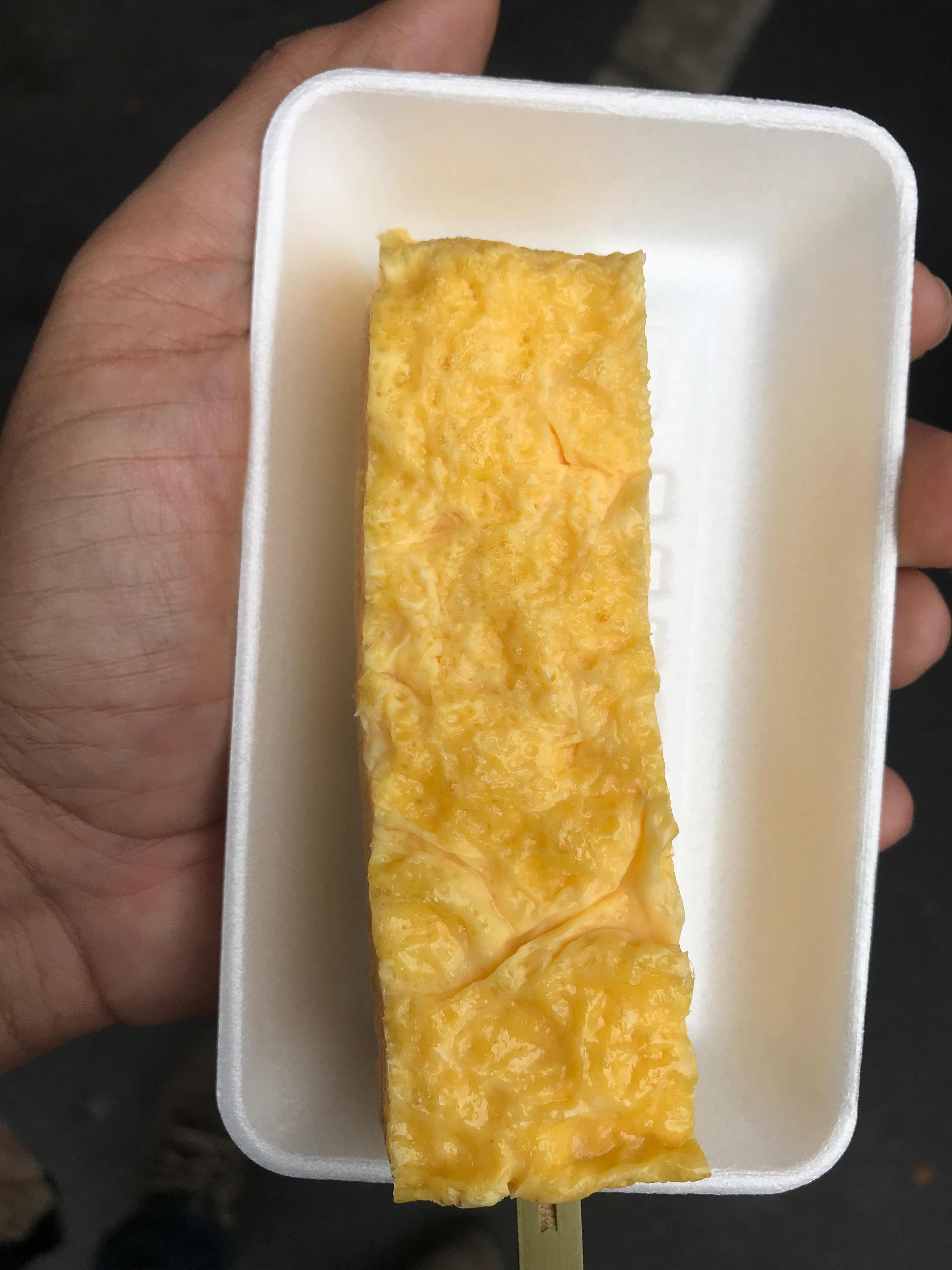 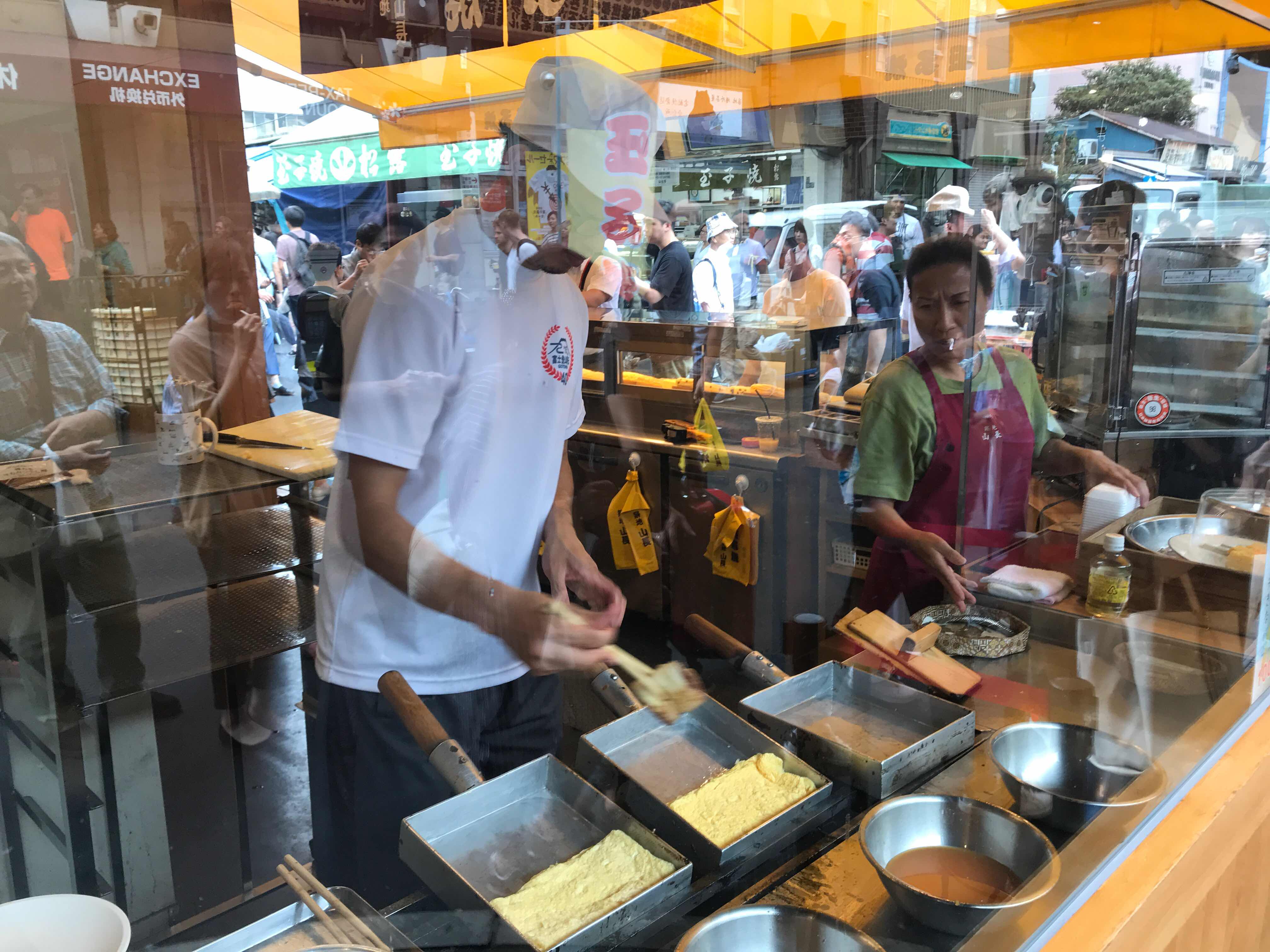 The star of the Tsukiji fish market ironically though was the life redefining wagyu sirloin teppanyaki that we had on the pavement. At 2000 yen a stick, this was the most expensive thing that we had here but it was clearly the Rolls Royce of meats. Such culinary wizardry served on a street corner was rather unexpected. You didn’t have to serve medium or rare or well done. It was done to perfection and was so tender. 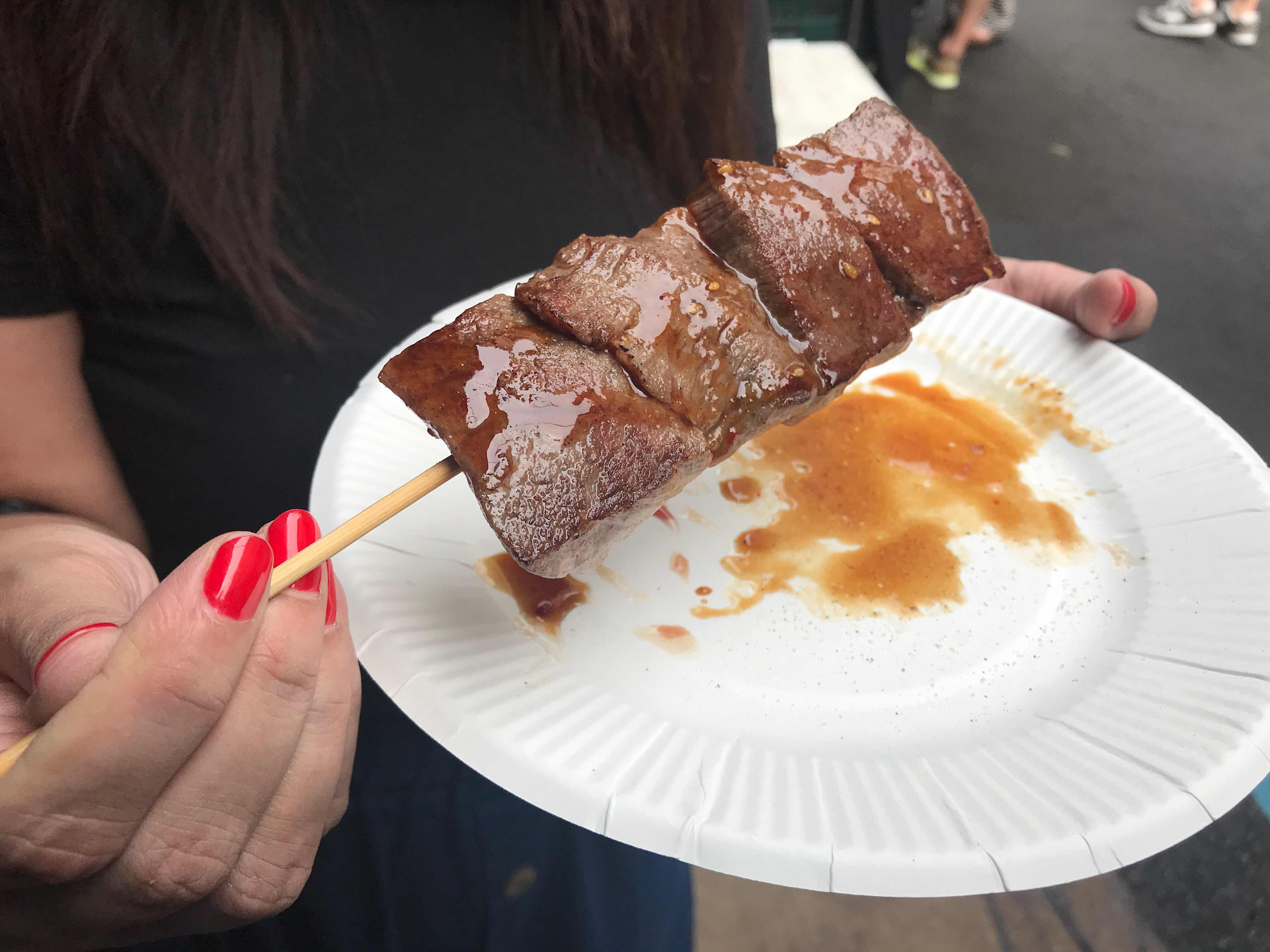 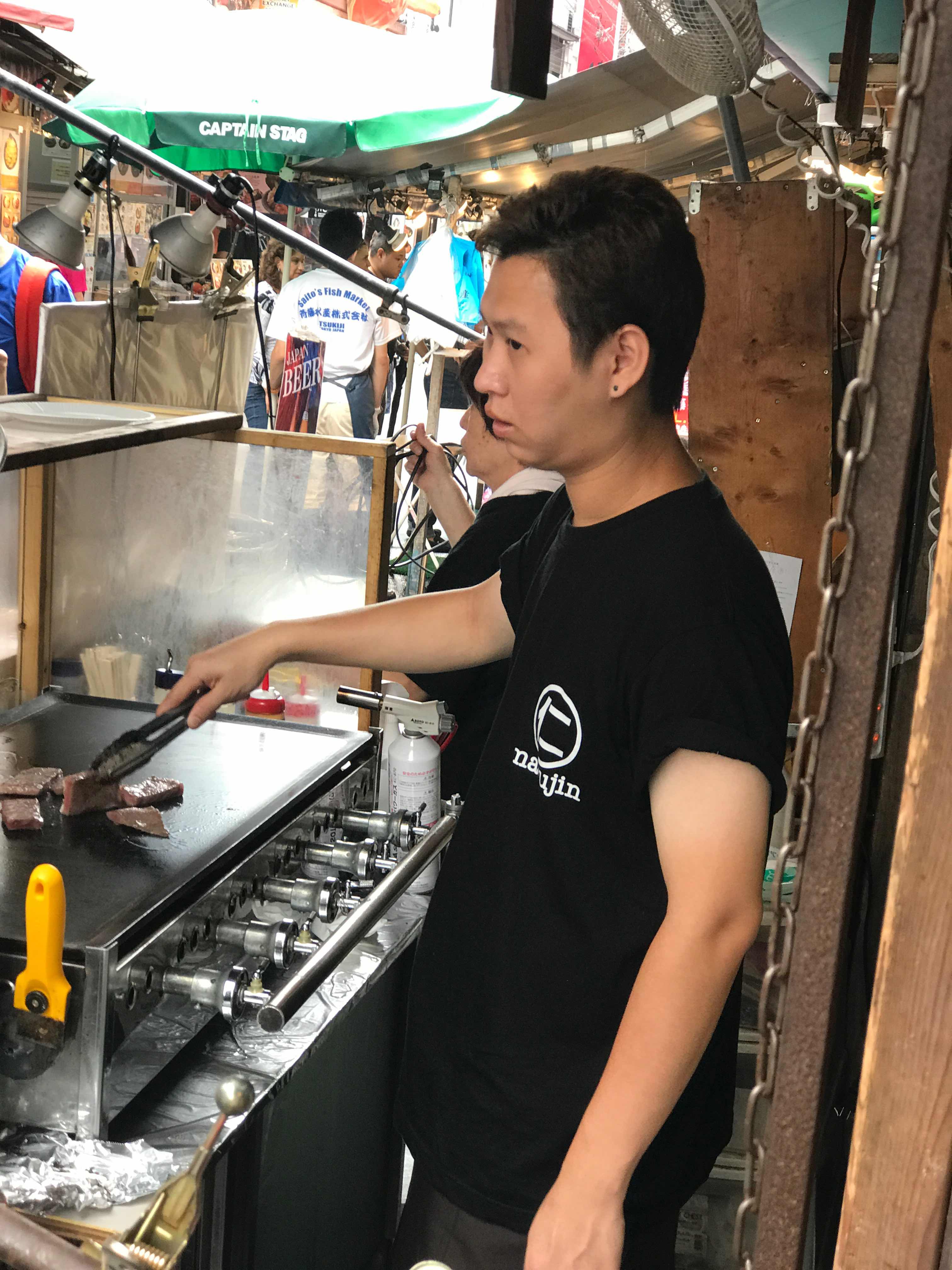 We dropped in for a cappuccino on a whim at the end at a local coffee shop named Yonemoto and sipping on some lovely coffee, taking in the local vibe, was just the farewell from Tsukiji that one could have asked for. Mr Yonemoto himself was in the shop when we went there and I later read in a newspaper article pasted there that he opens shop at 5 am for the folks who come to the fish auction to get their coffee. 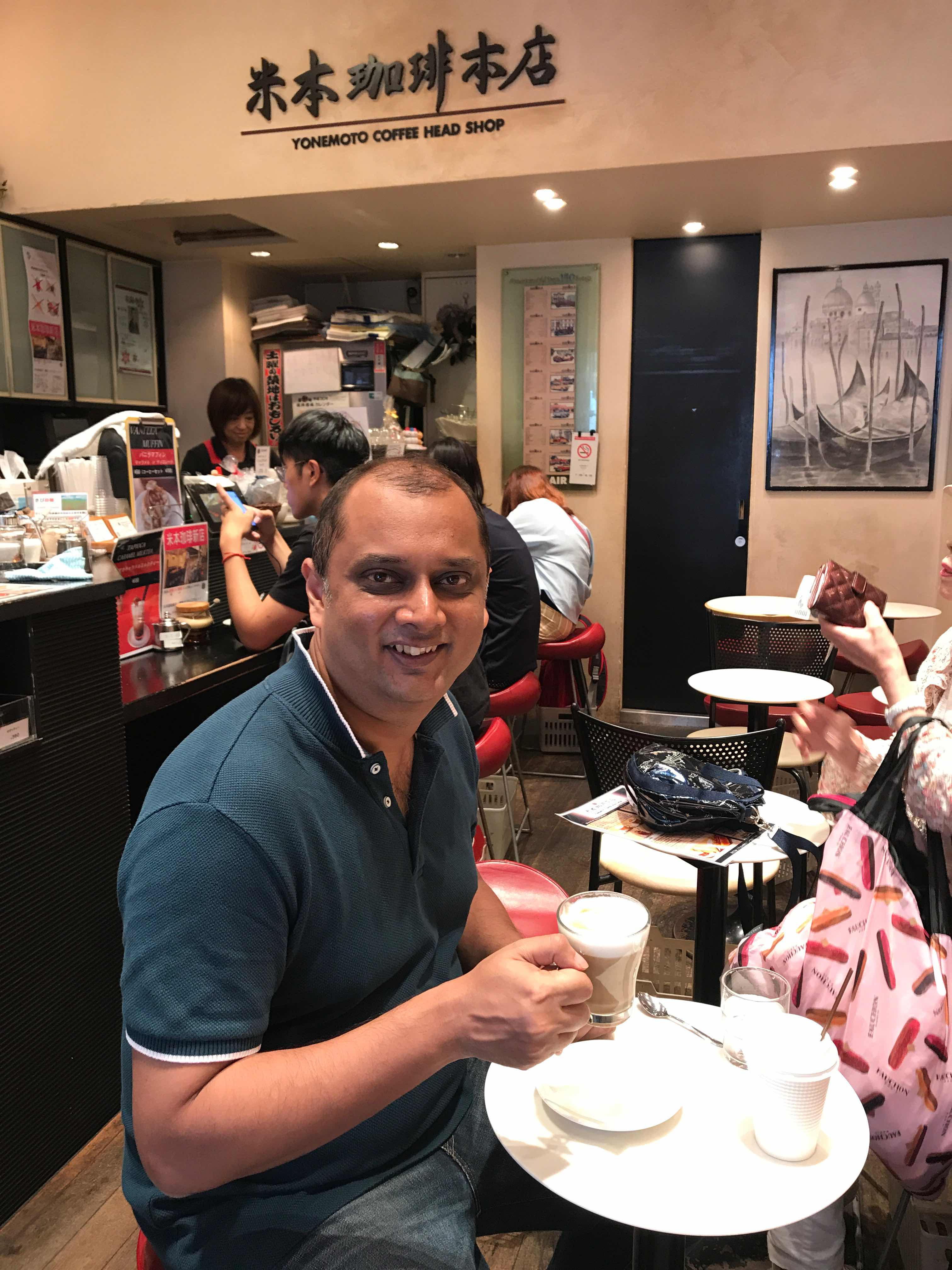 Updated: The wholesale market is getting relocated in September this year and we were lucky to have at least seen it it before it does and that’s what makes this post even more special, and it owes itself, even more than the others, to K for its existence. 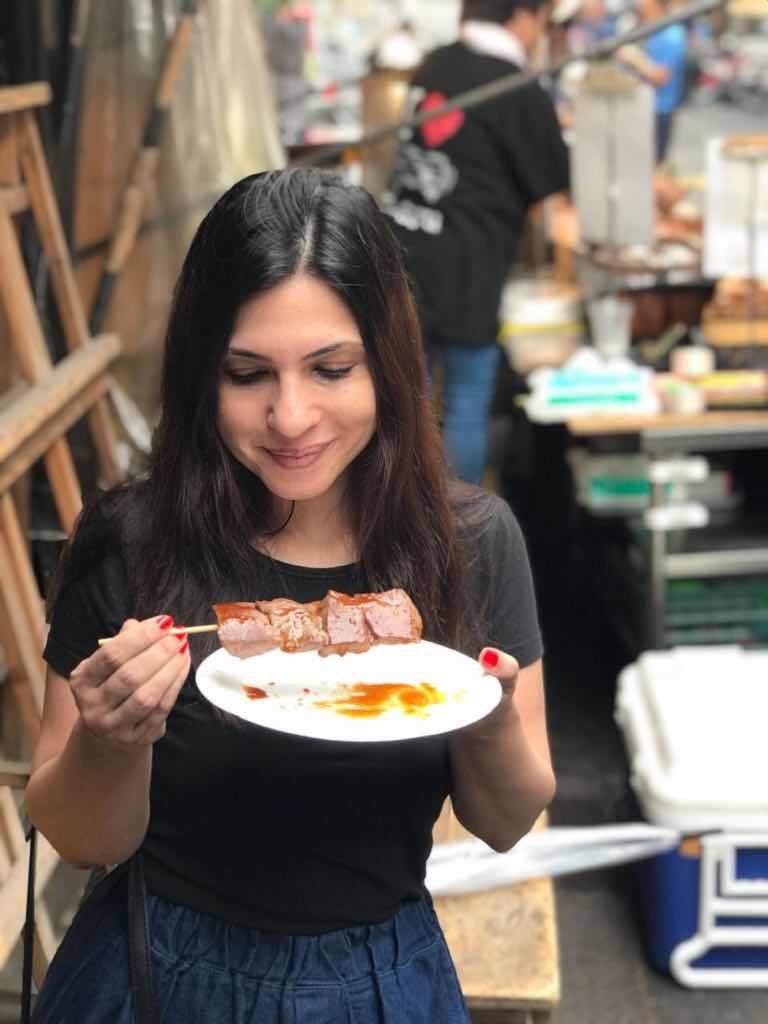 PS That’s me blogging at the hotel room at night. The pyjamas are supplied by our hotel, Allamanda Ayoma. I have never been in a hotel before where they give pyjamas and I must say that they are rather comfy! I couldn’t finish the day’s account though as it got rather late and I felt tired. See you on the other side of the night 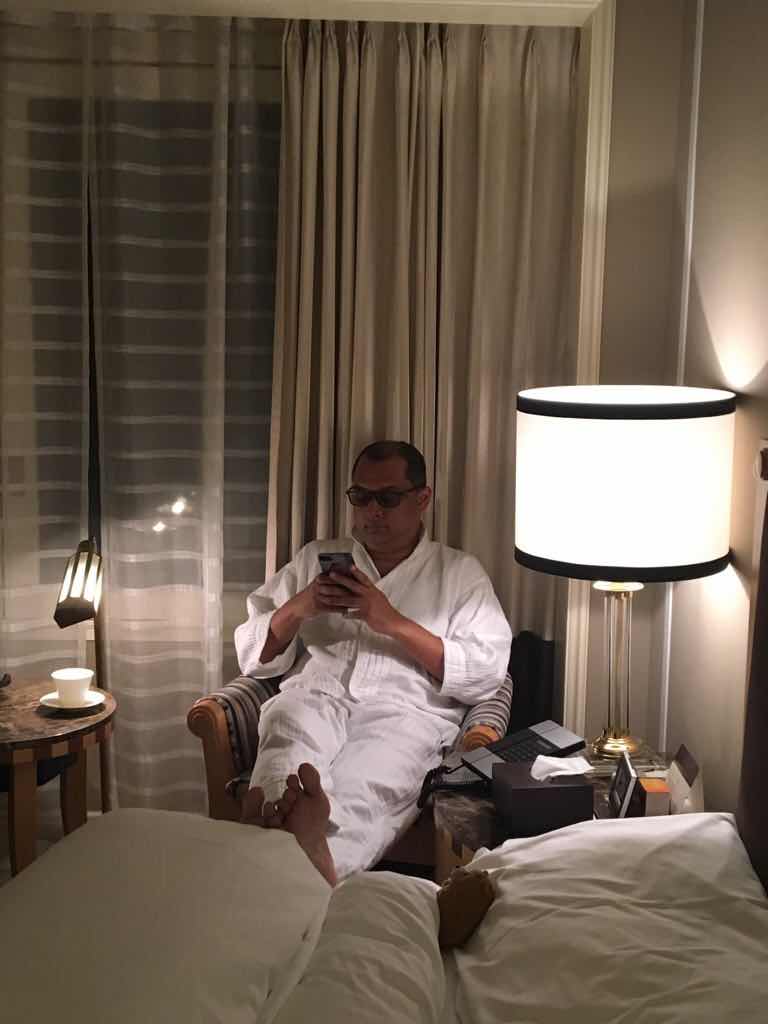