The bowl of ramen which welcomed me back to Tokyo 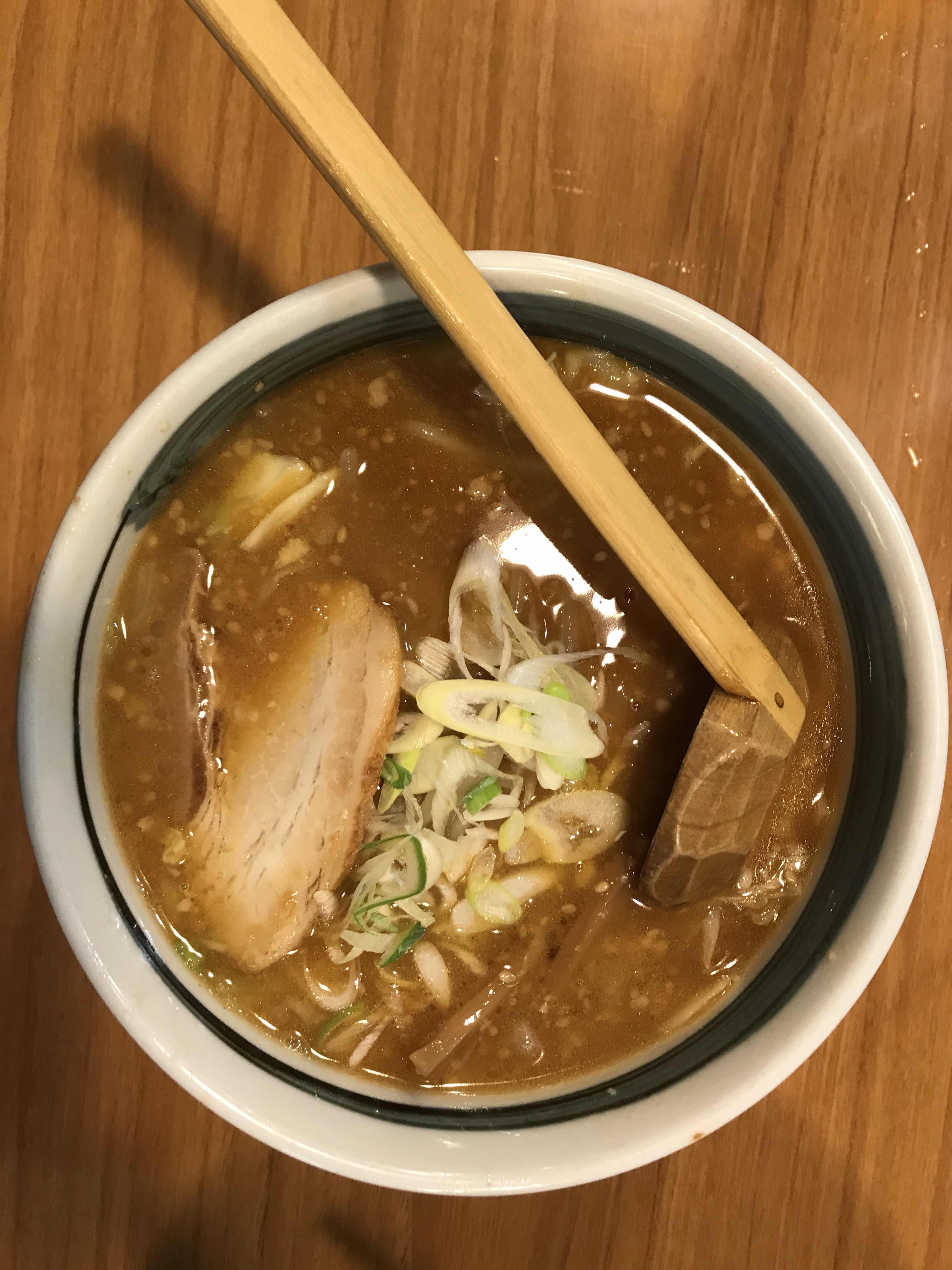 We are in Japan right now. Tokyo to be precise. A country that has been dream holiday destination of K and me for a while. Then one day she just decided to take charge and planned out this holiday and made it happen after doing all the research and arrangements for it and here we are now, in Tokyo.

The first time for her. In my case, it has been 39 years since I was last here. Then a kid accompanying my parents when my dad had come to Tokyo to present a paper at the world orthopedic surgeon’s conference.

In the early days of my blogging, I’d usually blog every night when I would travel. Even if I was tired. I was younger then of course and had more energy. These would be diary-like entries. Not lists on what to do or on where to go. Nor written with any thought given about how useful they would be to the reader or who would read it. I wrote just because I wanted to. That’s all.

I think I will try to do so again this time. Write reports of our day whenever I can during the trip and by using my phone to do so. Let’s see if it works and if you like it. I hope the formatting and the grammar do not go for a toss.

Our first dinner in Tokyo was about every food writing cliche on Japan that I have come across coming true.

The ones which read like, ask the locals to point you to their favourite place. Step in even if the road outside seems empty and the signs inside are in Japanese and even if you are the only foreigner around. Point at something and order without fear. And you will never have a bad meal. It will be very good in fact.

That’s what happened tonight. We checked into our hotel, the Allamanda Ayoma, refused the friendly young lady at the reception’s suggestion that we eat at the hotel restaurant. Smiled politely when she offered us a printout of restaurants approved of by the hotel as a second option.

We asked her instead about her suggestions on where we could get a good ramen.

Her eyes lit up in hearing us and she said, ‘there’s one, just a minute’s walk from the hotel.’

We checked into our room and freshened up as we had been out of home for twenty odd hours since we had left. 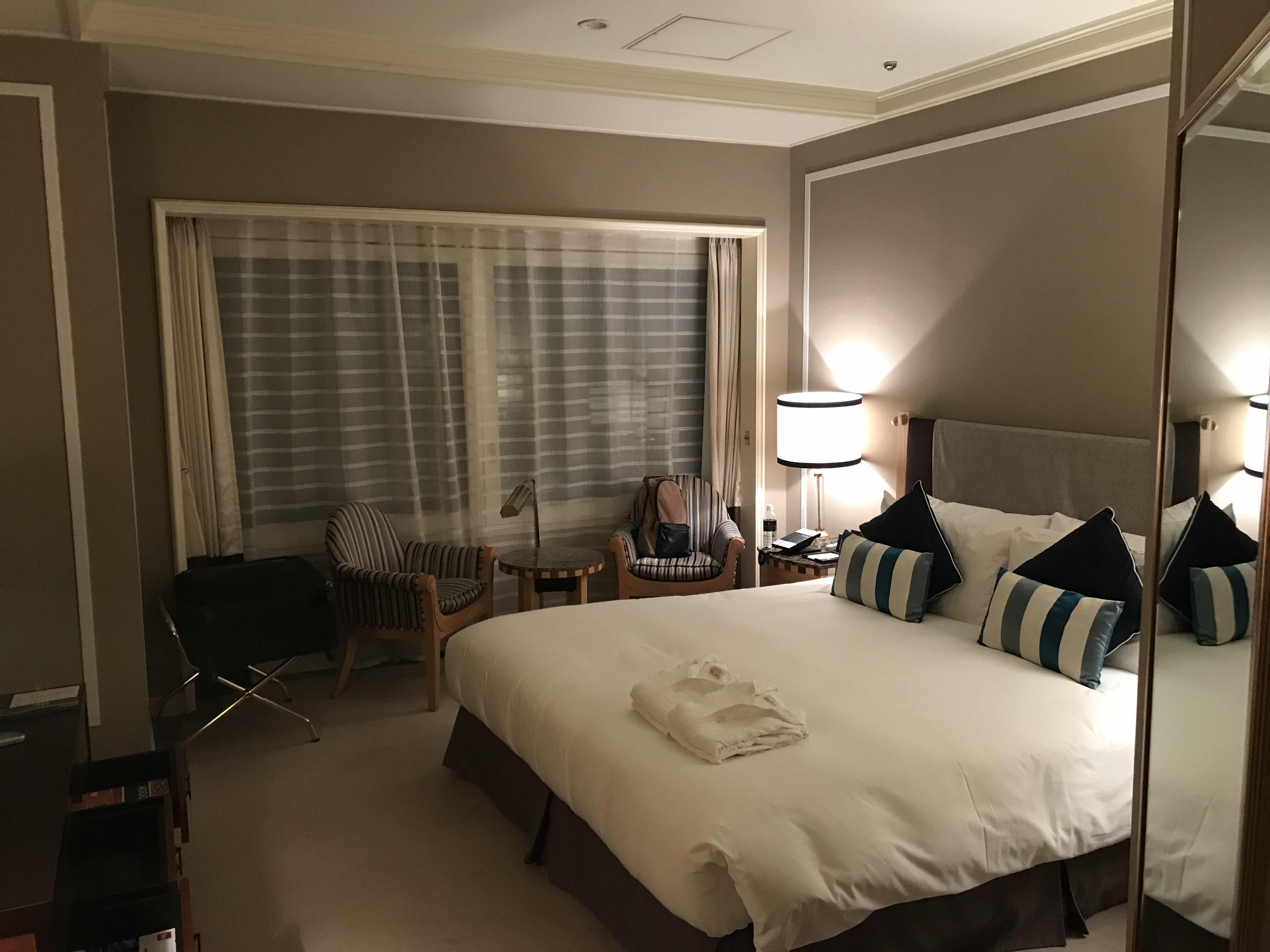 Then we walked out and went into the place she recommended and yes, that’s where the magic happened. 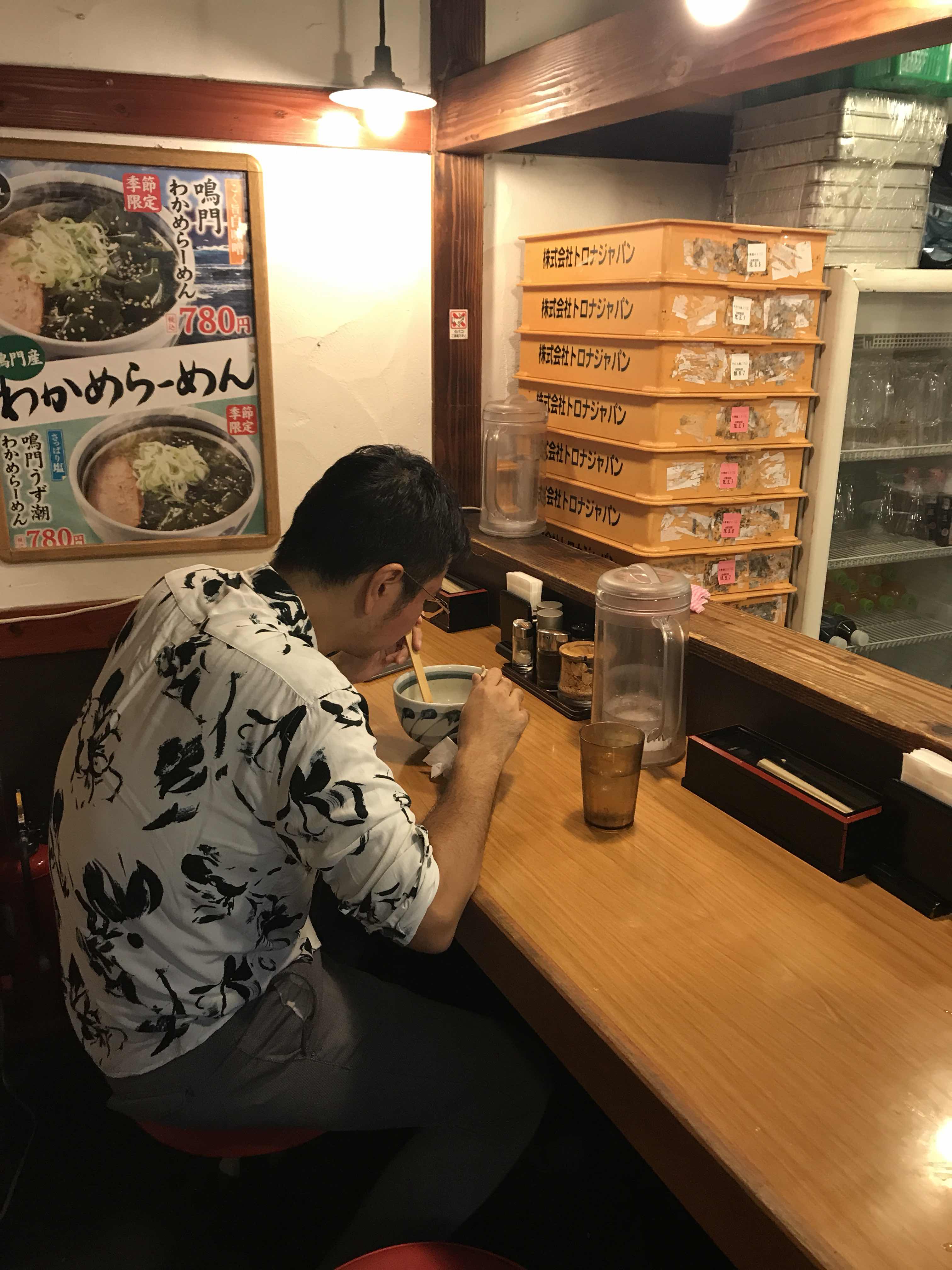 It was as if we were in the sets of the Netflix series, rhe Midnight Diner. There was a gentlemen sitting by the corner having his ramen. Slurping as one should while having ramen.

A young boy came out from the kitchen to take our order. He realised  that we didn’t speak Japanese and were not the usual customers who came to the shop and were lost. He called in a lady from inside the kitchen. She ran the place it seems and was cooking inside too. 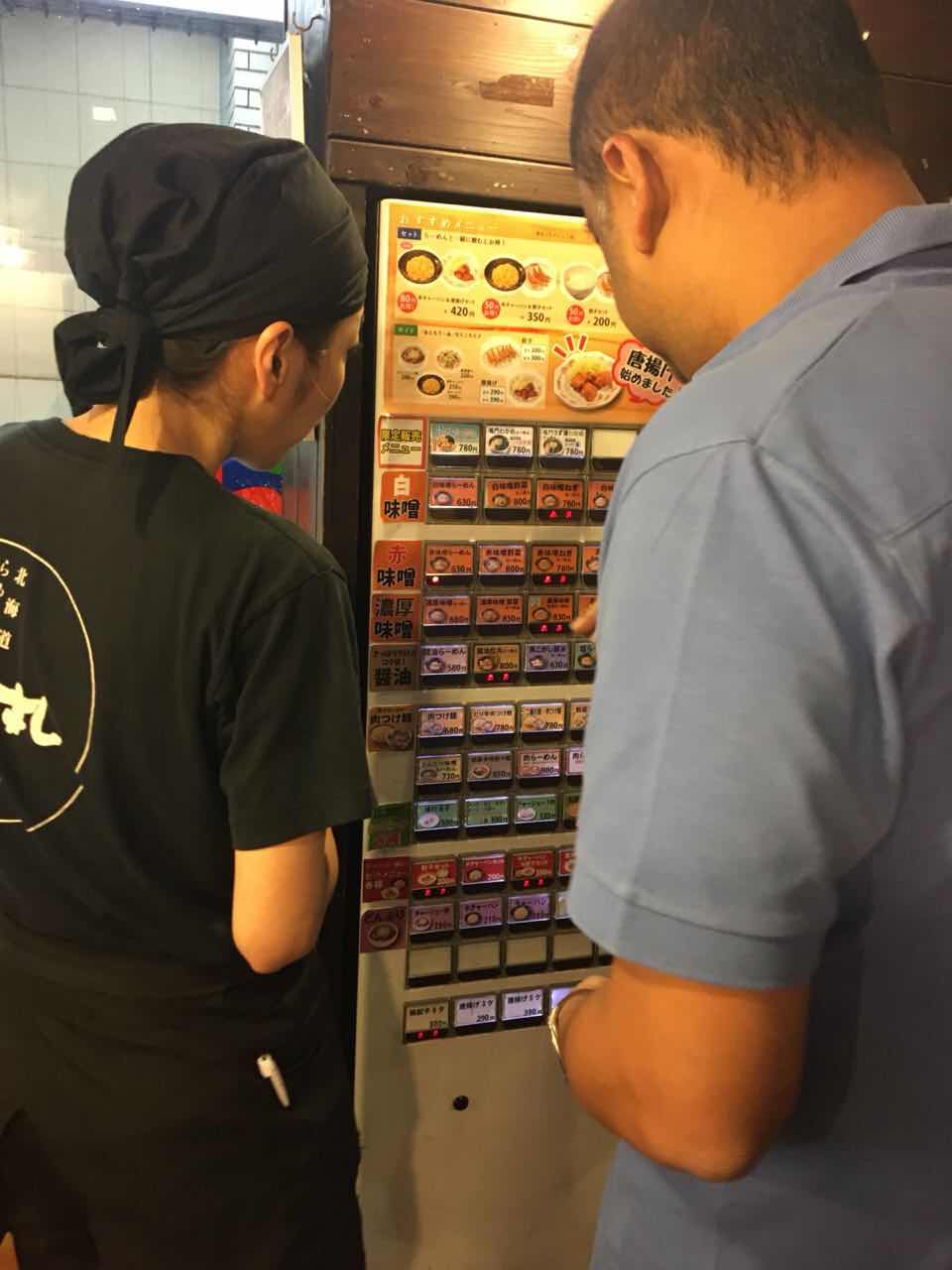 She understood the problem, smiled warmly at us. She to figure out what we wanted. I knew only two relevant words of Japanese. Tonkutsu ramen.

She knew only two words of English it seemed. Spicy, non spicy.

We finally closed our order by pointing at two pictures on the vending machine. The order seemed to read one  tonkutsu ramen miso and one something spicy ramen. 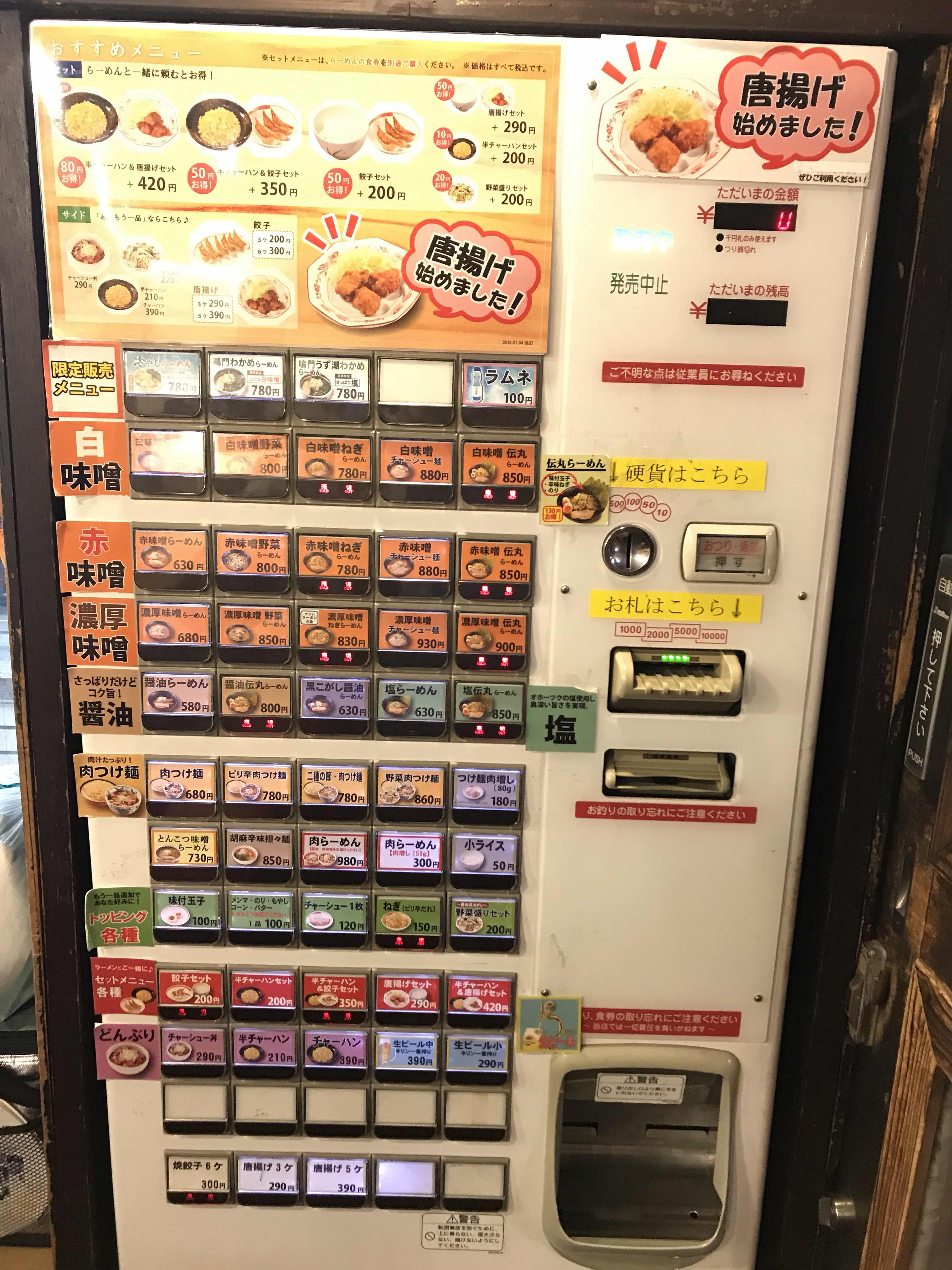 As instructed by her, and as I’d seen in a travel show on YouTube, we put in two 1,000 yen notes in the slot machine and got change back for 1,400.

She went in to cook. While we waited  middle aged ladies appeared, sat down with their shopping bags and the places their orders. The first  gentleman finished and left. Four young Japanese girls came in and placed their orders. An enderly gentleman came in  and placed his order. We were the only non-Japanese folks there even though we were in a reasonably central area of the city. 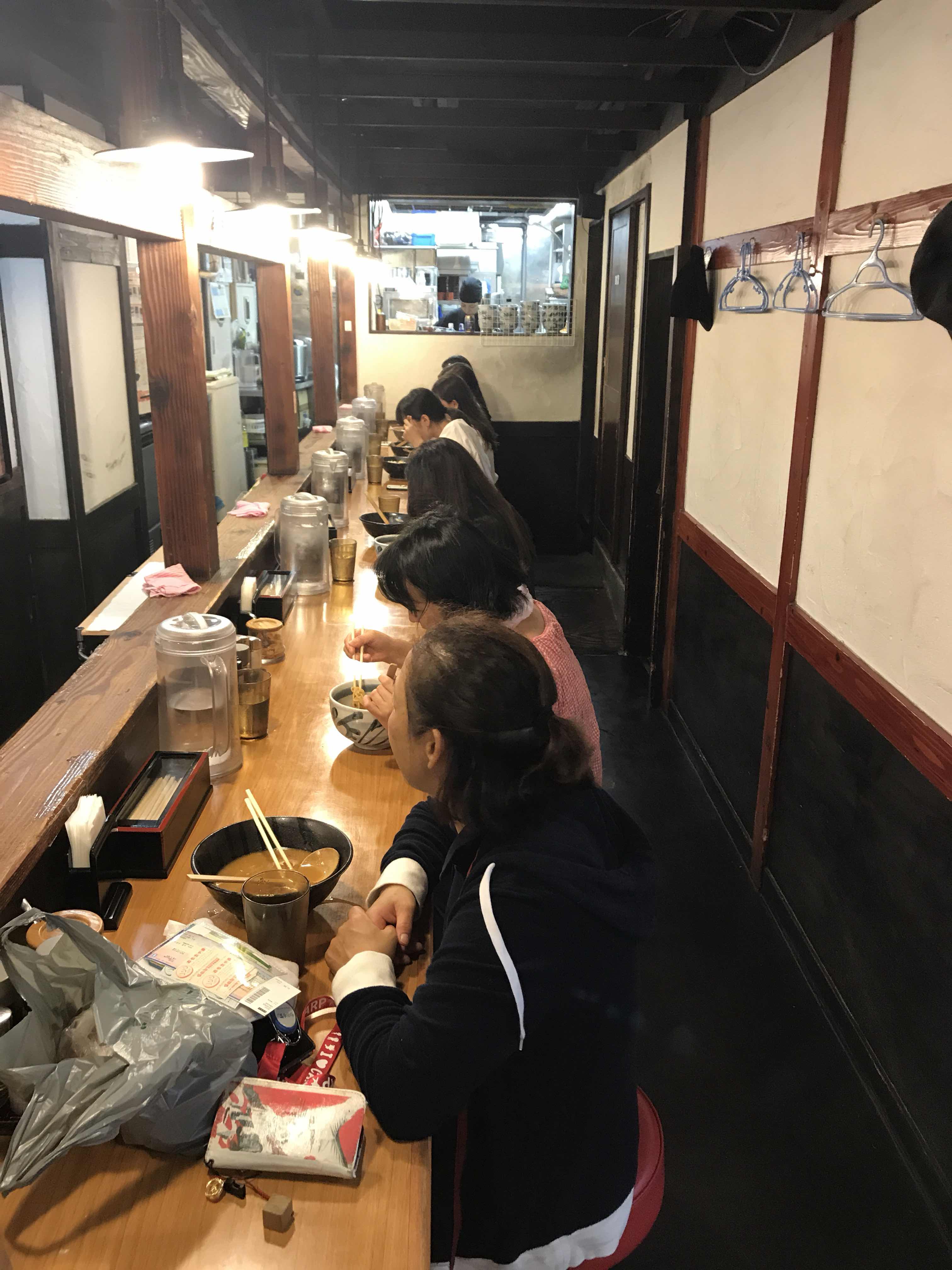 The young boy came running out from the kitchen with our ramens and those of the others. Massive bowls full for each. 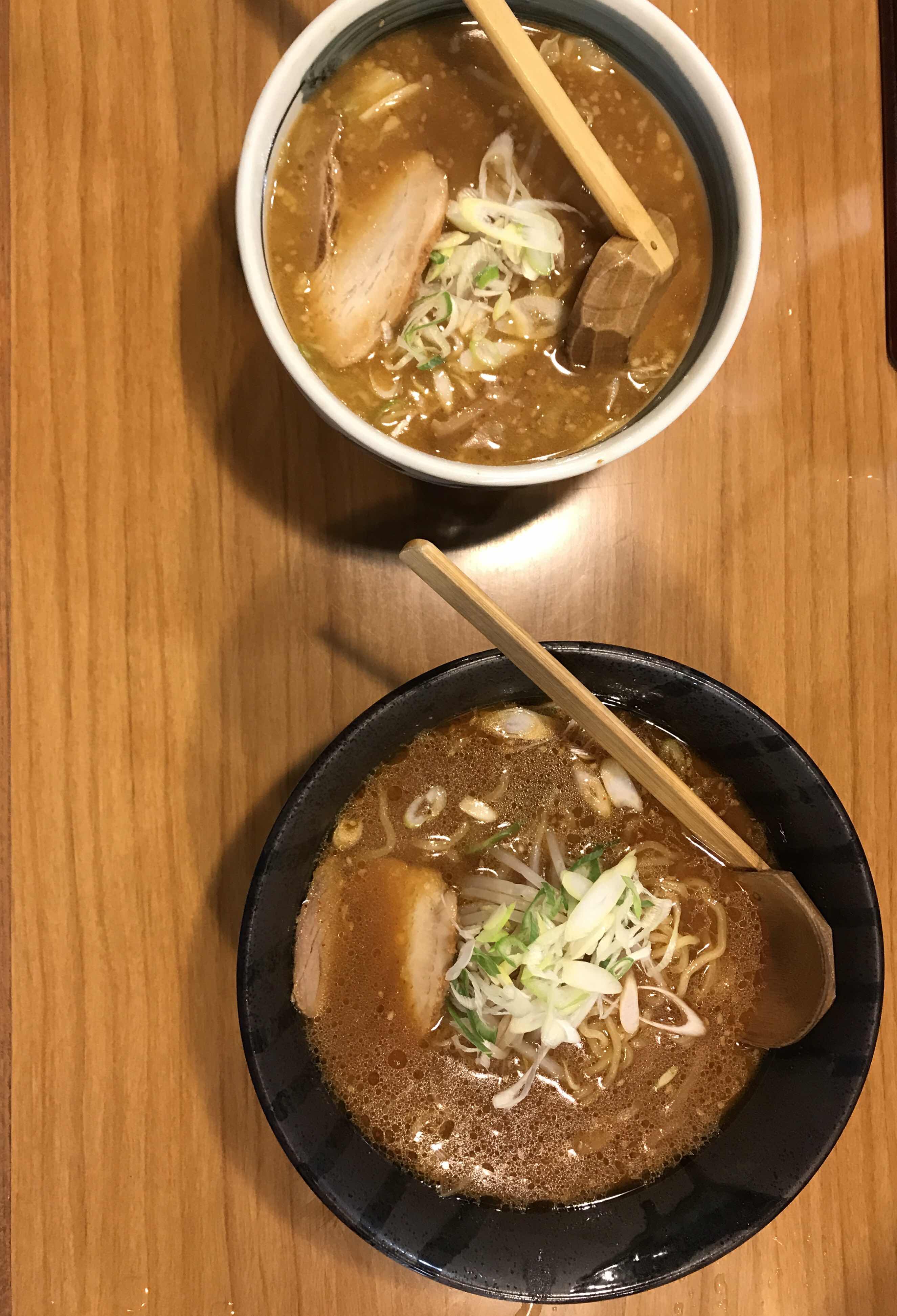 I think I got the spicy one. Spicy as in rejuvenating but not tongue numbing.  K the miso one. One sip of our broths and we both smiled, the weariness of the day’s travel were wiped away by the hot and heart soup. We dug in and finished both bowls, one hungry mouthful after another. The noodles were nice and firm. Each bowl had two thin slices of pork in it. Each slice as tender as they get. Rendered like works of fine art. There were no eggs. Eggs had to be ordered extra. In a few days we will be more adept at ordering I am sure. We realised that just as the curry of India, there’s no ‘standard’ ramen either and this was just the beginning. How exciting is that?!

There were crunchy bean sprouts and some lovely sliced mushrooms too. Like economical food across the world, lots of carb, a wee bit of protein and a broth which was packed with soul made them a hit.

I couldn’t have asked for a better start to the trip. 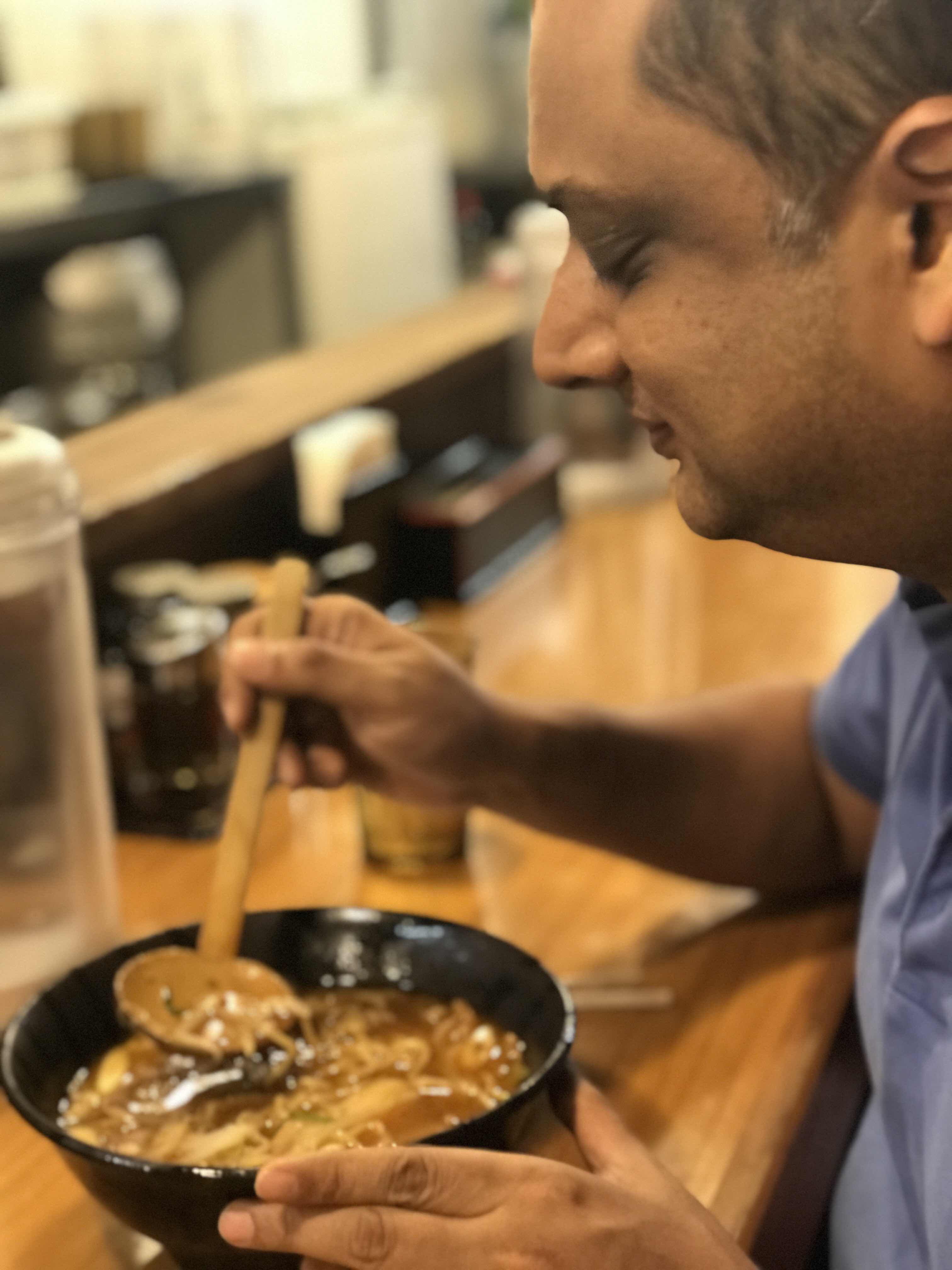 What other Japan cliches got validated today?

Yes, they are indeed very polite and helpful folks. Our cabbie from the Shibuya station to the hotel, for example, not only helped load and unload our suitcases but made it a point to put our suitcases in a way in which we would not have to lift them to go to the hotel.

And the toilets, specifically the commodes, are indeed engineered to give every WC in the world an inferiority complex. They are like mini Starship Enterprises. The one in our hotel rooms cleans itself when someone walks into the bathroom. Has options where you can press to get your butt cleaned with jets of water at various angles. The toilet seat stays warms and reponds to the push of a button.

Even Steve Jobs couldn’t have thought of these! 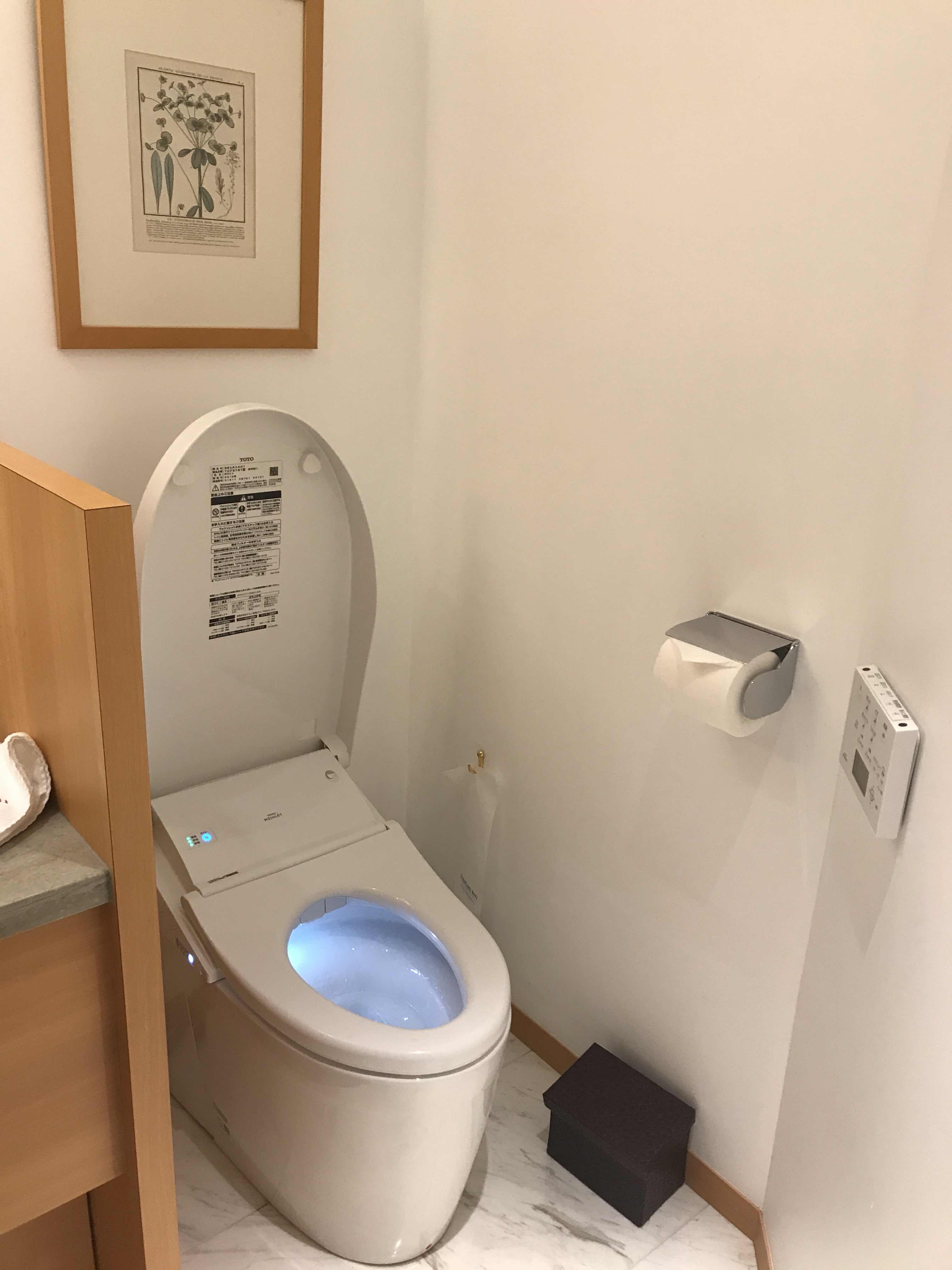 What was the name of the ramen place you ask?
Look for this shop outside the Allamanda Ayoma Hotel. It was all Japanese to me you see. 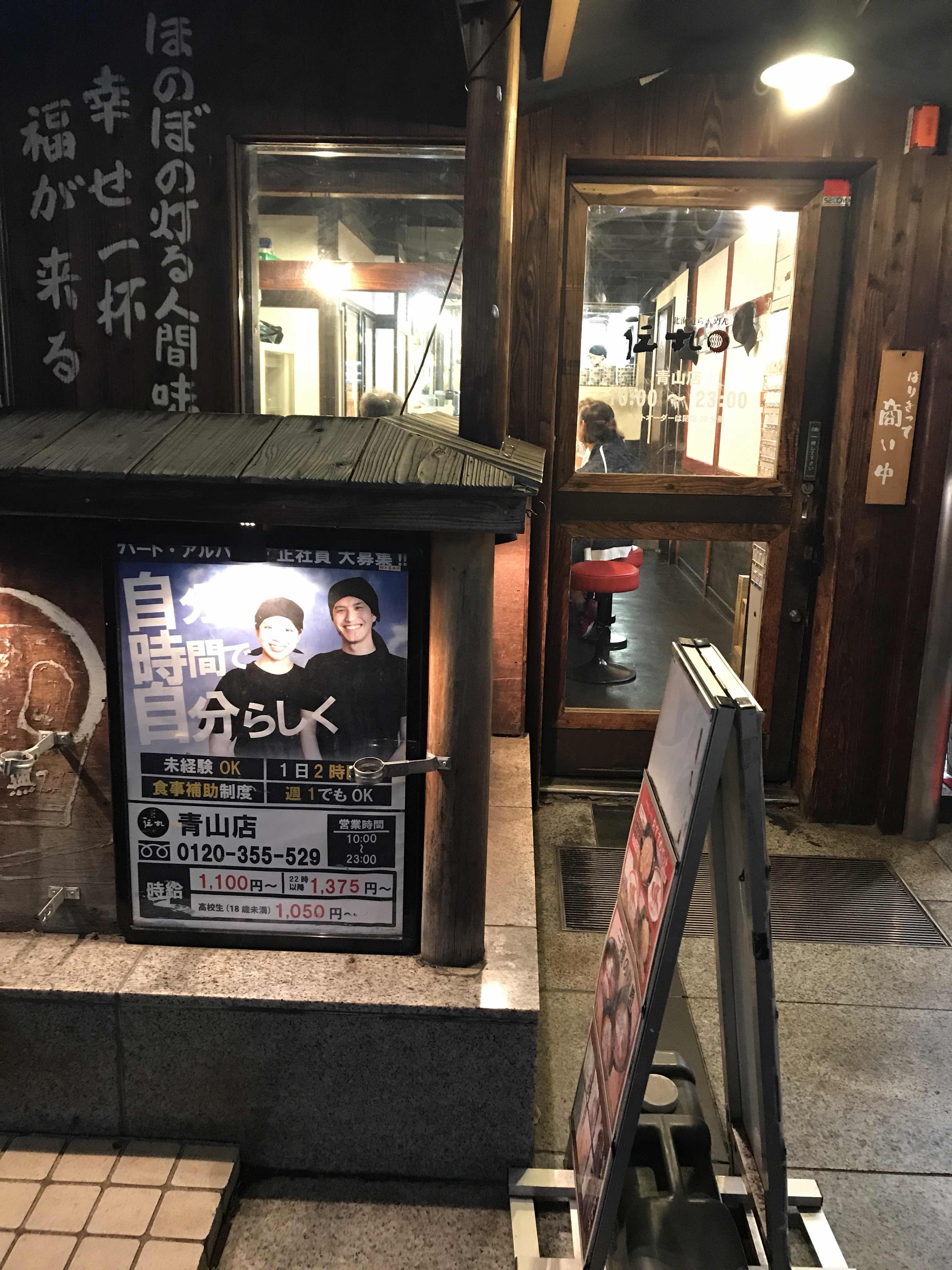 PS Our first taste of Tokyo was at the Starbucks at the Narita Airport before we took the super convenient Narita Express to Shibuya. The cappuccinos way better than in Starcbucks India, with none of the excessively milky taste the latter has. 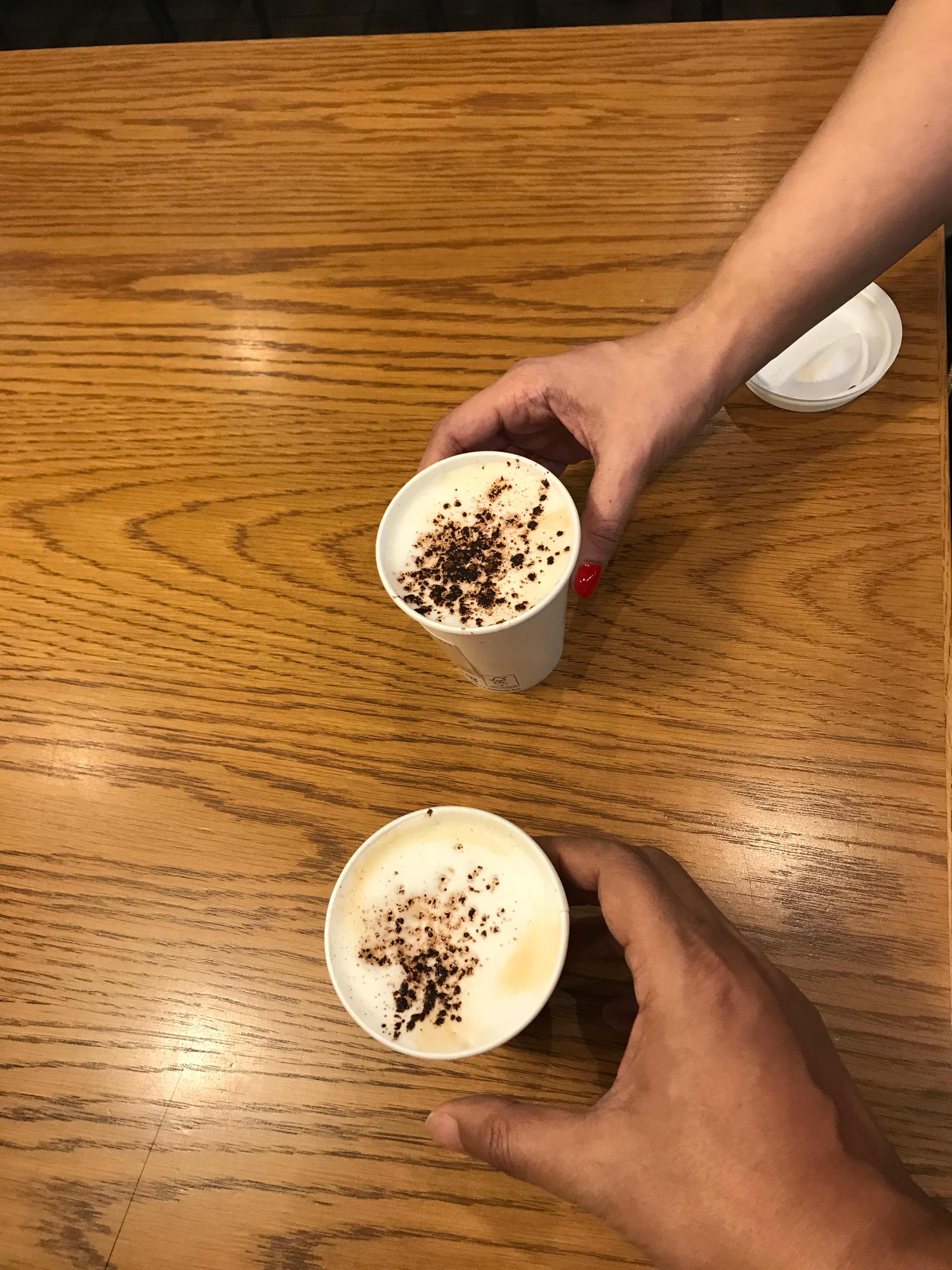 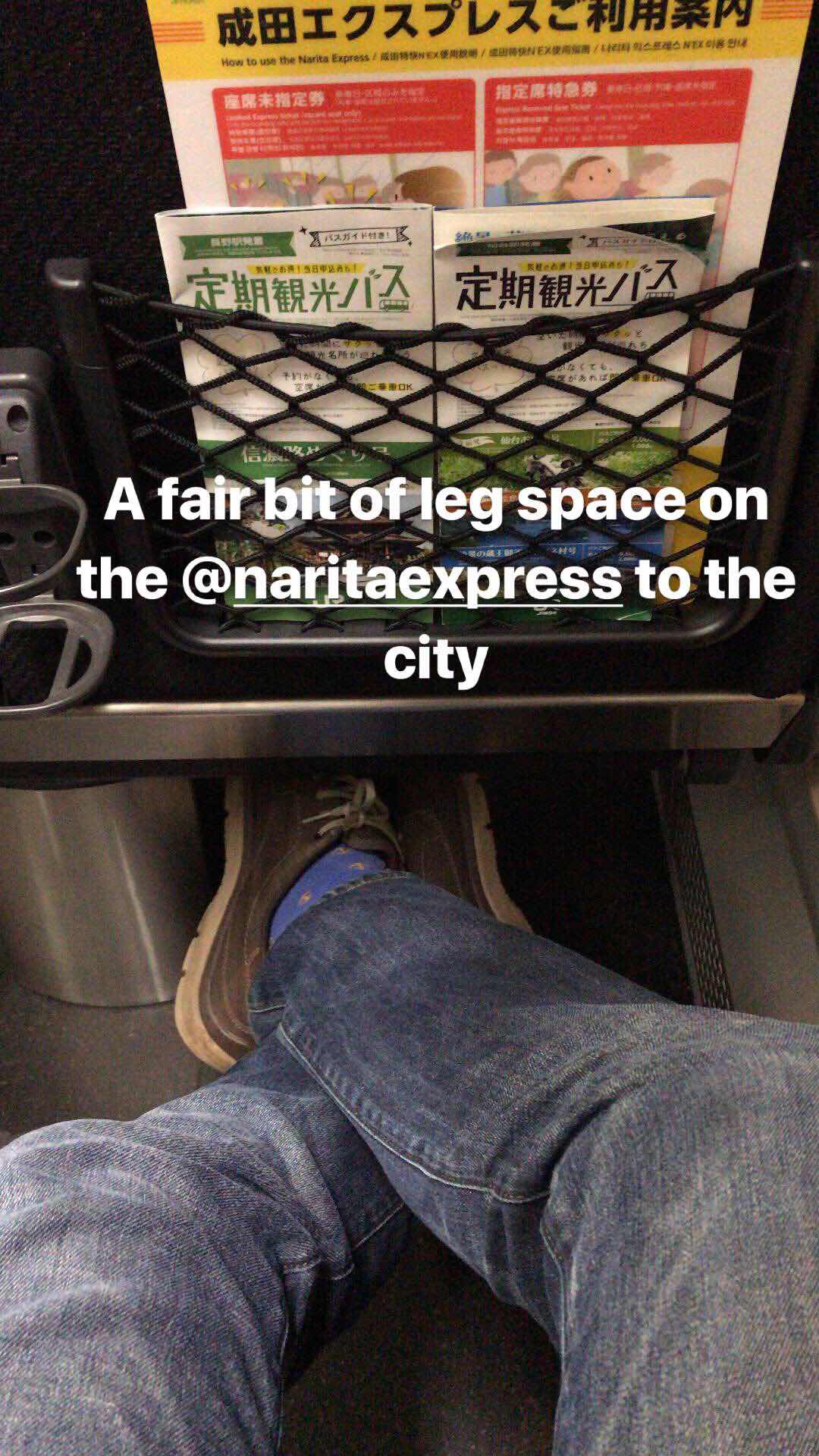