Why sushi will never taste the same again after our dinner at Sushi SORA at the Mandarin Oriental, Tokyo 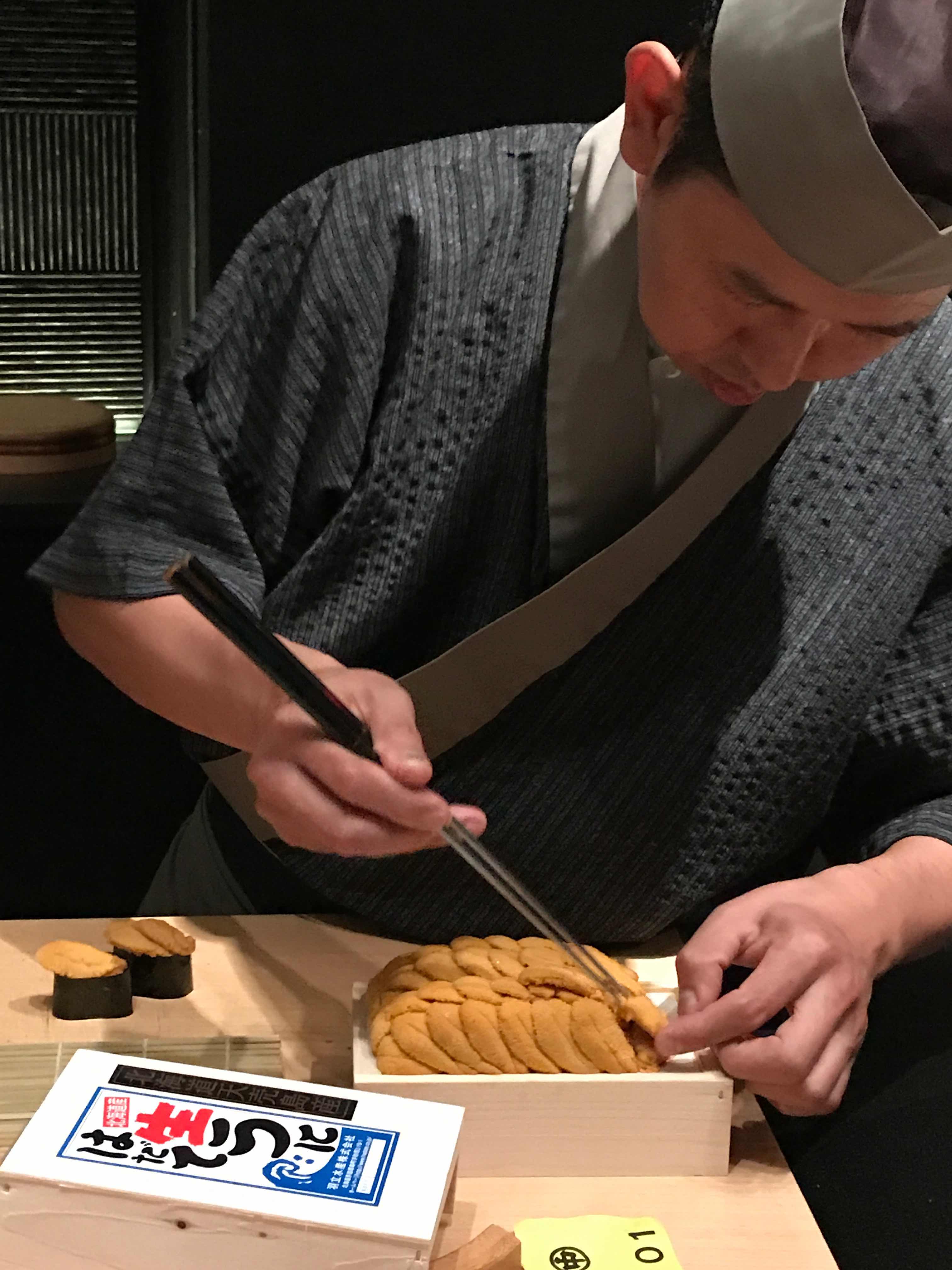 We are in Tokyo now and safe as the city hasn’t been affected by the typhoon Jebi but our prayers for their safety go out to the wonderful people of Japan and especially those who have been affected by it and may they regain normalcy soon and have lives which are better than ever before.

‘Please use your fingers to take the sushi when it is served,’ said our hostess from the restaurant with a warm smile, during the orientation at the start of our meal. ‘We call this ‘Tokyo style’. The idea is that you should relax and enjoy your sushi when here.’ 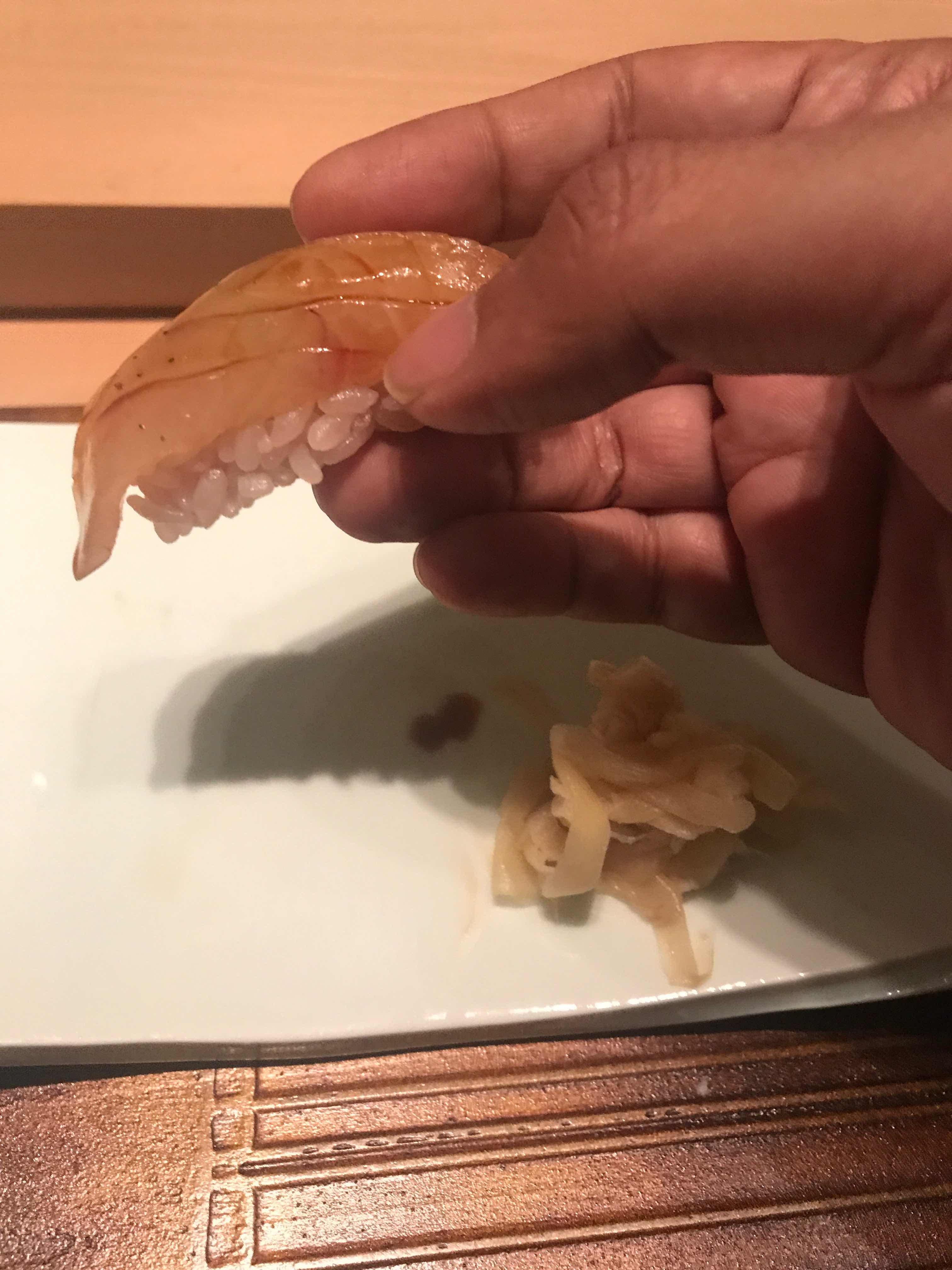 I heaved a sigh of relief on hearing this. I am not adept at using chopsticks and ever since I had read and heard that it is fine to do so, I have been using my fingers to eat sushi. This was just the vote of confidence that one needed. 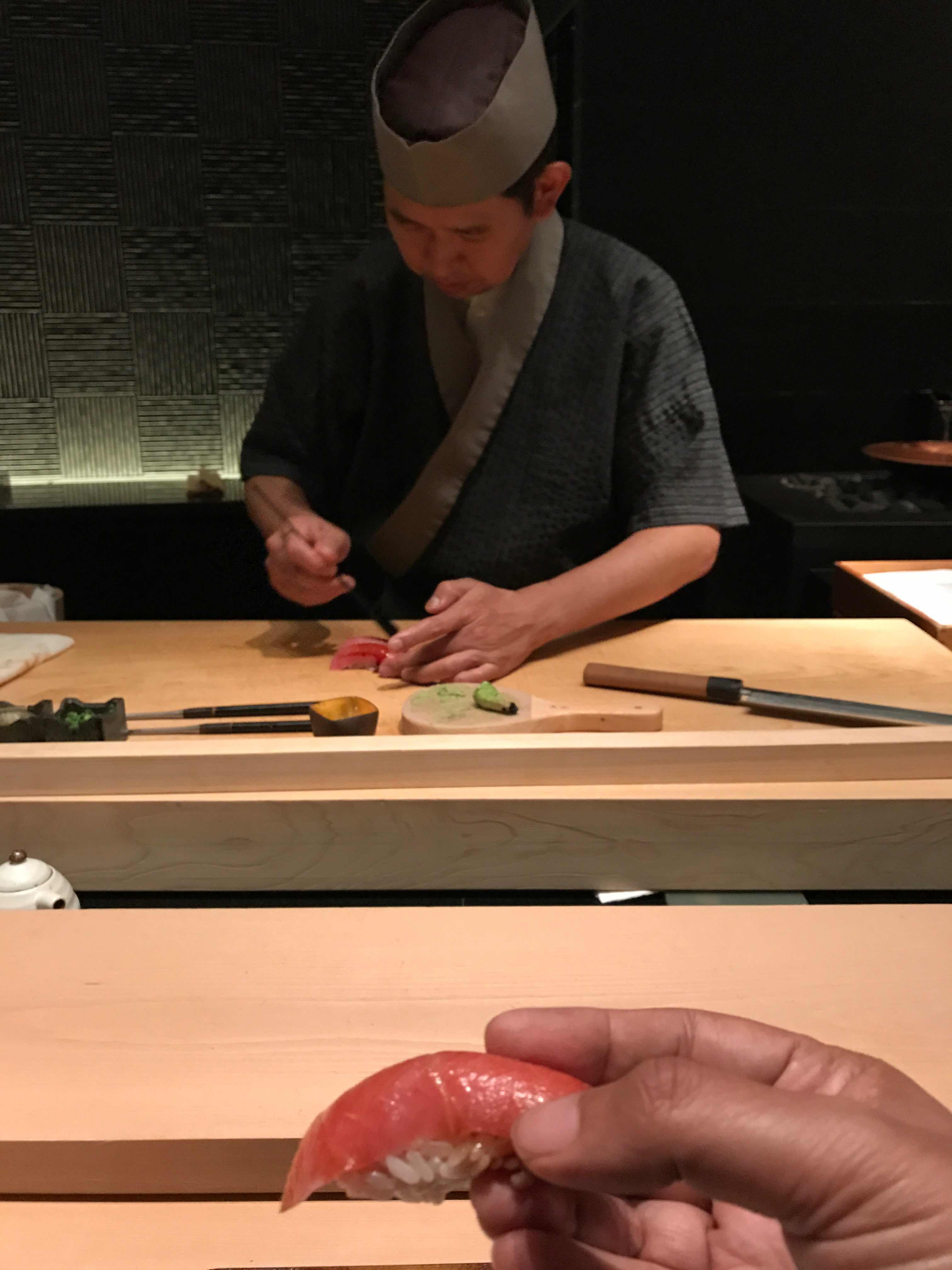 The experience that followed was life redefining. The sushi that we had here spoilt me for all other sushi to come for a long, long time I am sure.

I am talking of the dinner that we had at Sushi SORA last night. This is the sushi restaurant of the Mandarin Oriental Hotel, Tokyo, whose guests we are for a couple of nights in the city. They had invited us to dine with them during our stay. While they have a variety of restaurants in the hotel, I was clear right from the beginning that Sushi SORA is where I’d like to have dinner. I love sushi and I didn’t want to let this chance pass.

Sushi SORA is a small restaurant with limited seating by the sushi counter. You can look out on to the Tokyo landscape from the 38th floor while here over dinner.

That’s till the magic begins though, because from then on you will not have eyes for anything else. You will be held in a spell by the rhythmic movements of the sushi master and the artistry of the food that he serves you in the omakase meal. 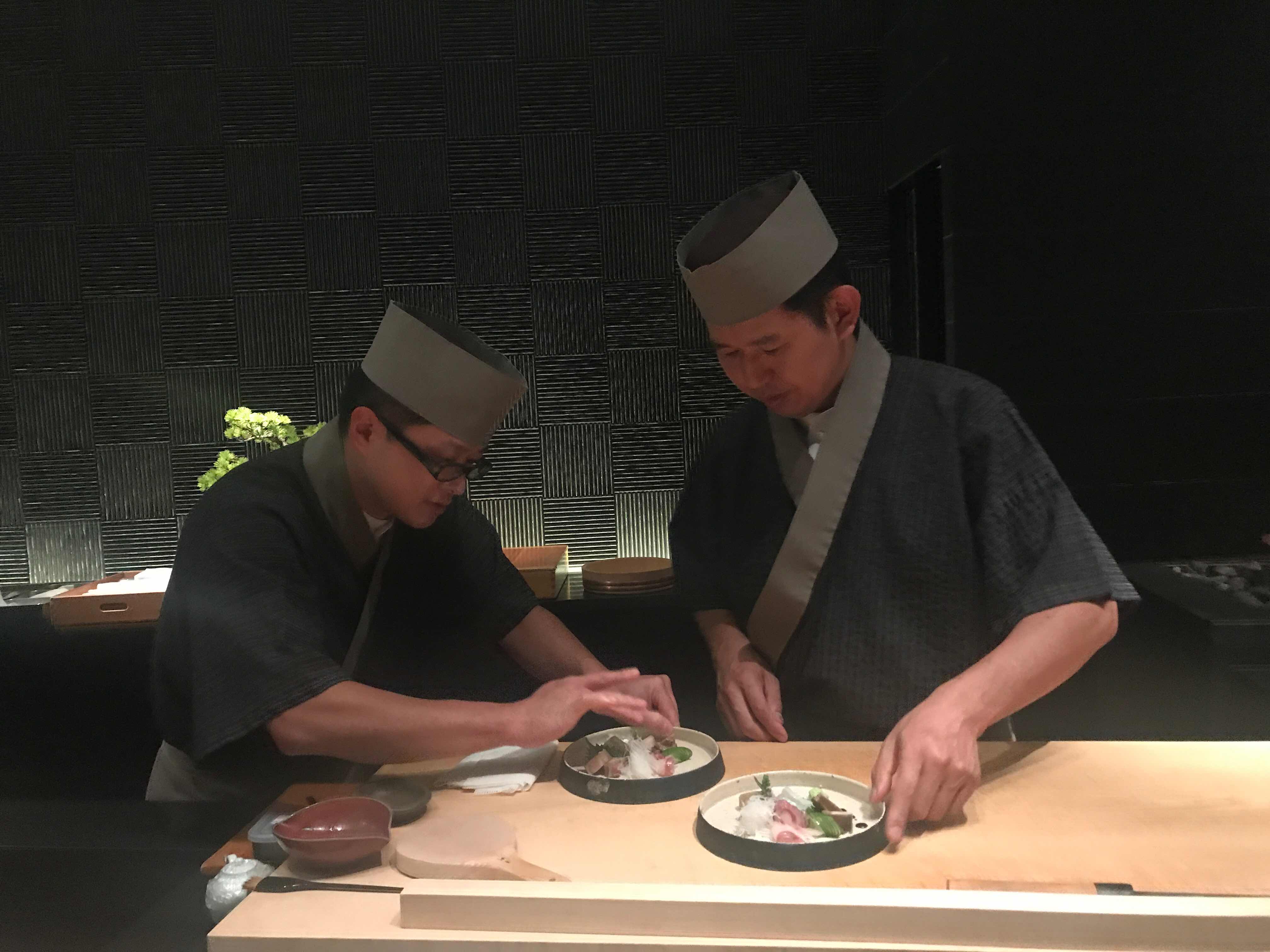 The thing is, while they ask you to relax and enjoy your experience here, the chef’s concentration and focus on what he is doing is beyond compare. His eye is on the fish just as Arjun’s was in the Mahabharata, in a rather literal way.

Our hostess too kept an eye on each of the diners and the moment the chef served us a plate, she would come with a book and explain what we were eating and what was special about it. The experience was as complete as it could get. 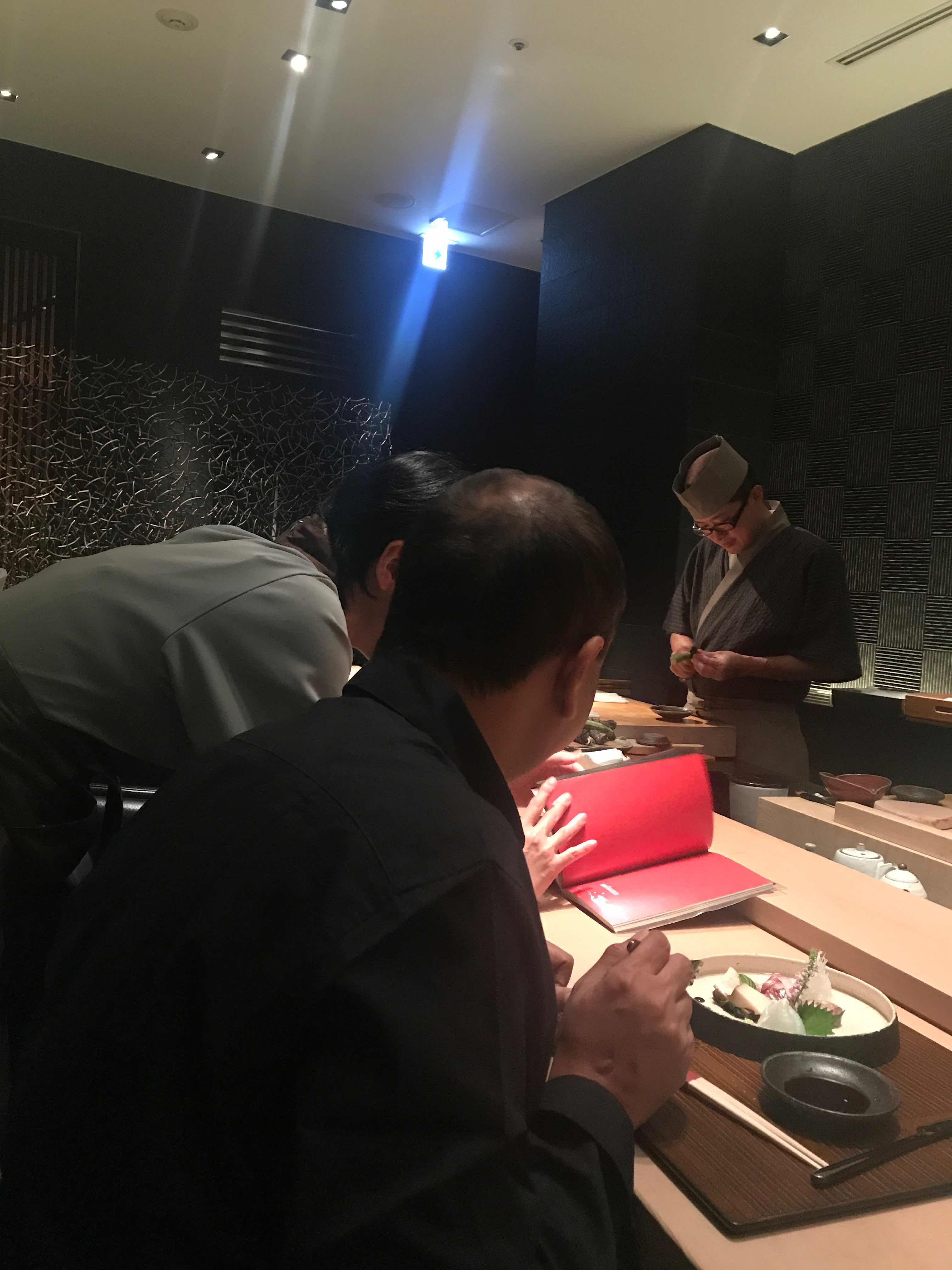 Earlier in the day we had gone to the Tokyo Edo museum and had learnt that the people of Edo, the historical name for Tokyo, loved eating seasonal food. The seafood served at Sushi Sora is seasonal too. Which is why I got to have fresh salmon roe for the first time in my life. Not the frozen stuff that I had eaten before. You put it in your mouth and it dissolves into streams of ecstasy and your life will not be the same again after that. 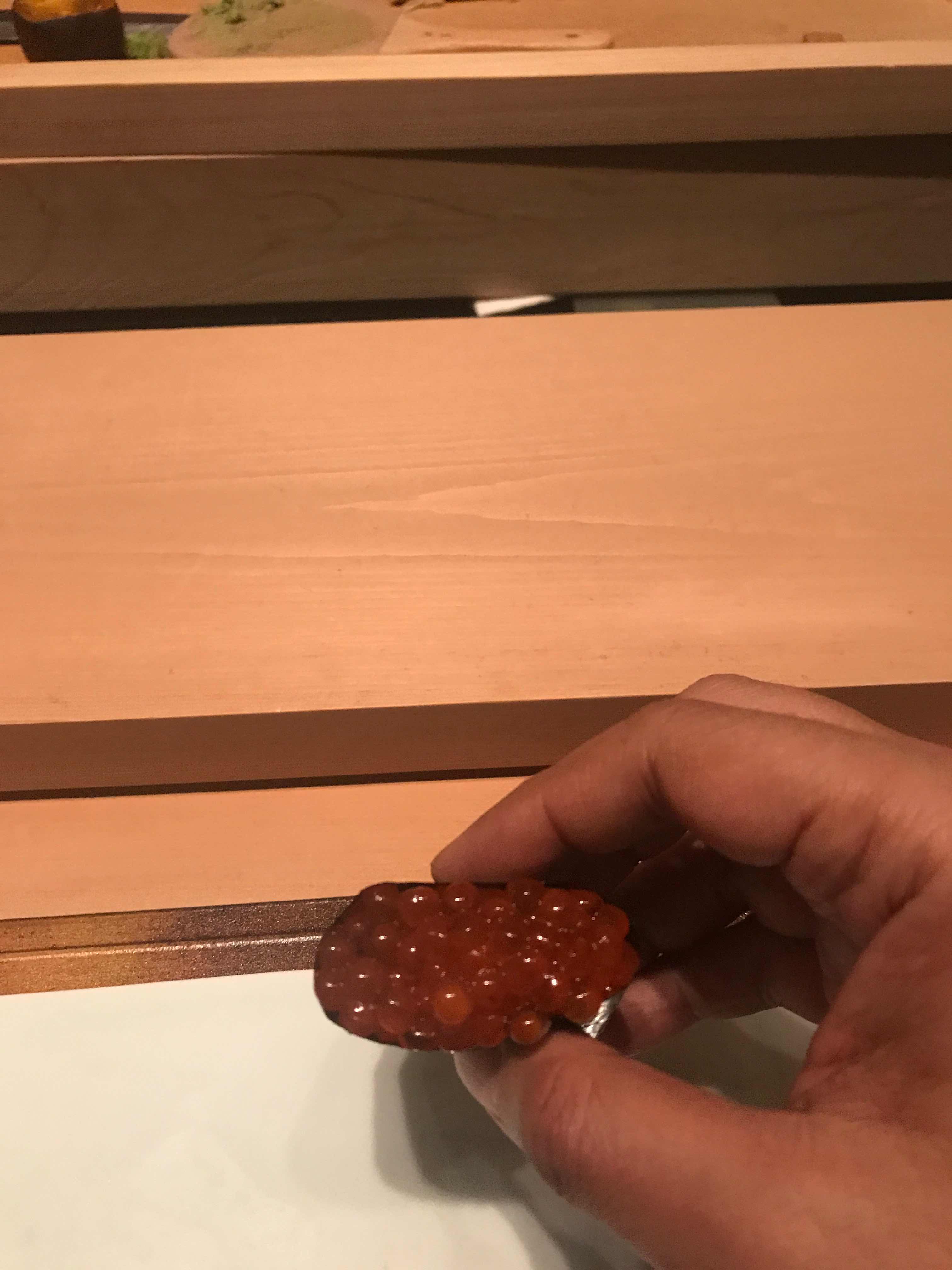 As you know, I had tuna and sea urchin in the Tsukiji fish market the previous day. This time, chef Okabe San of Sushi Sora took out what he said is the no 1 sea urchin at Tsukiji and hence in Japan. The sticker on the box said so too. What he served was unbelievably creamy and had none of the slight bitterness that I had found in the sea urchin in the market the day before. The intensity of the flavour of the sea urchin was balanced by the vinegary rice and the match seemed to have been made in heaven as the cliche goes. Sushi master heaven that is. 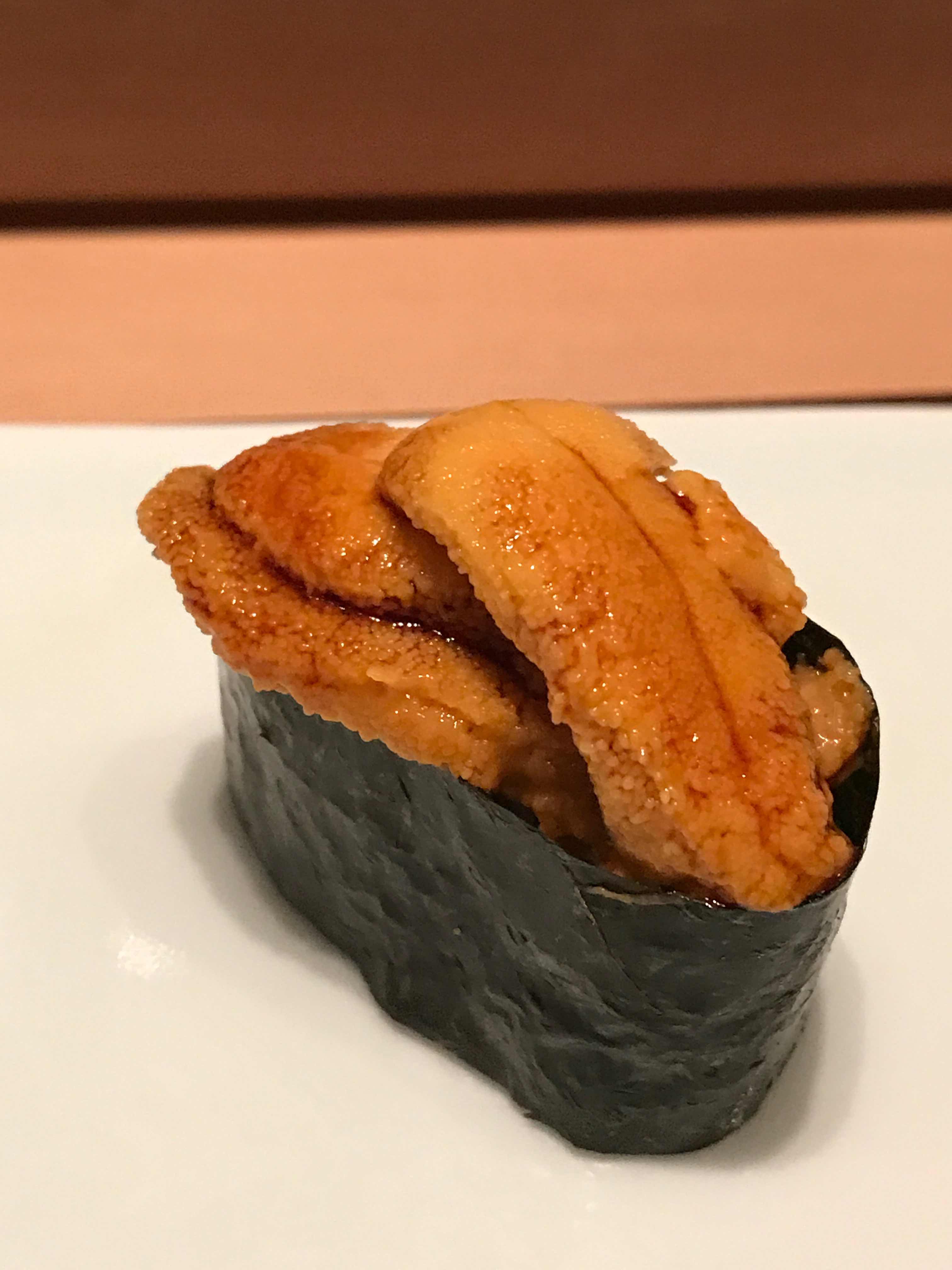 Okabe San took out slabs of salmon.. ‘lean’ and ‘very fatty’...and my eyes popped out when I saw them and I began moaning with pleasure at the thought of what was in store, even before I tasted the fish. I knew what was coming. 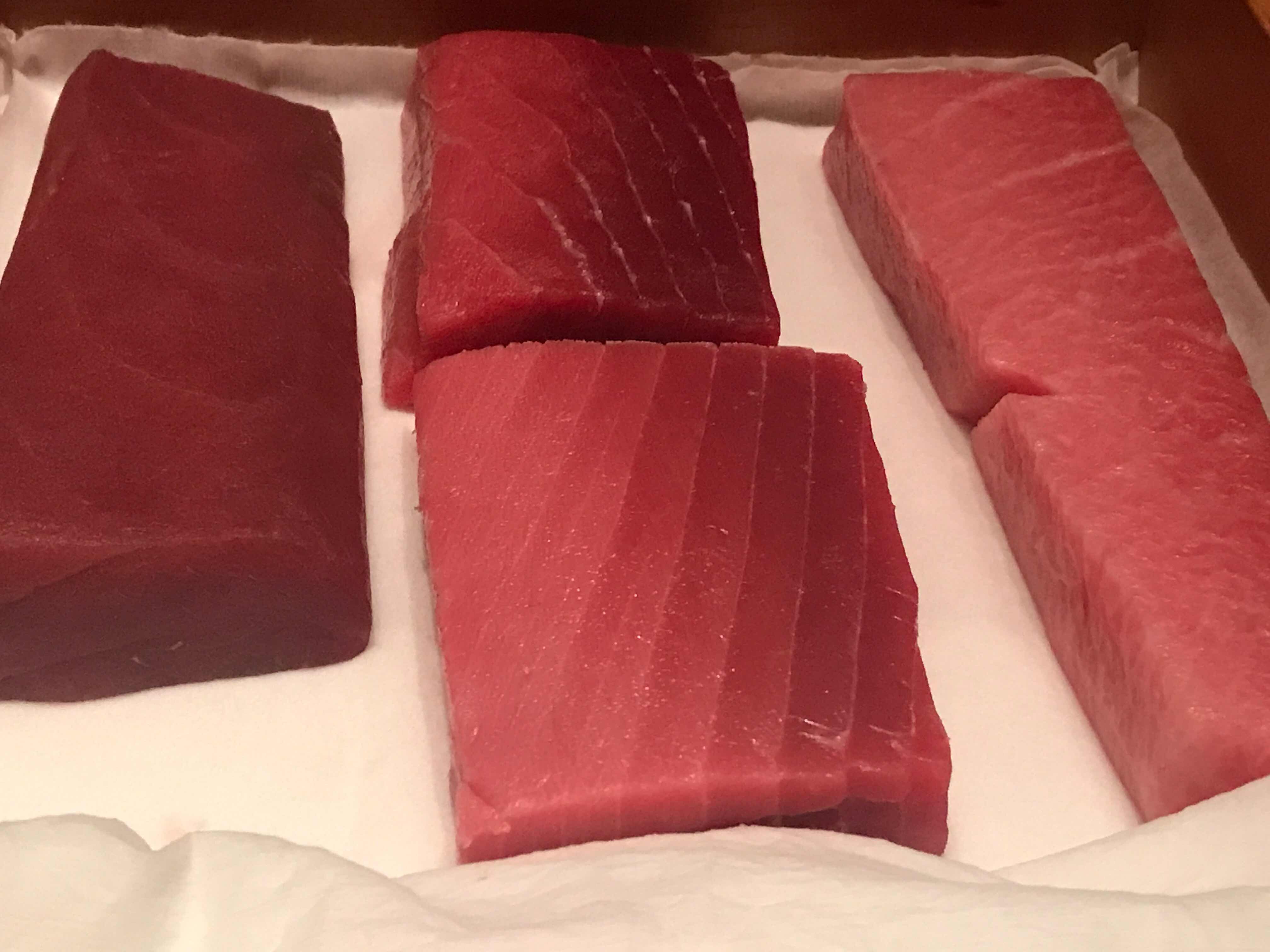 I have had tuna in premium sushi joints in India and some of that was very good I must say. This was in a different stratosphere though. I put each tuna sushi at Sushi SORA in my mouth one by one and shut my eyes and smiled as if I had attained enlightenment. The tuna gave in to my tentative nibbles and its magnificence took over all my senses.  I wanted the experience to stretch as much as I could. Feeling thankful for the life I have and to my blog thanks to which I could have this wonderful experience. 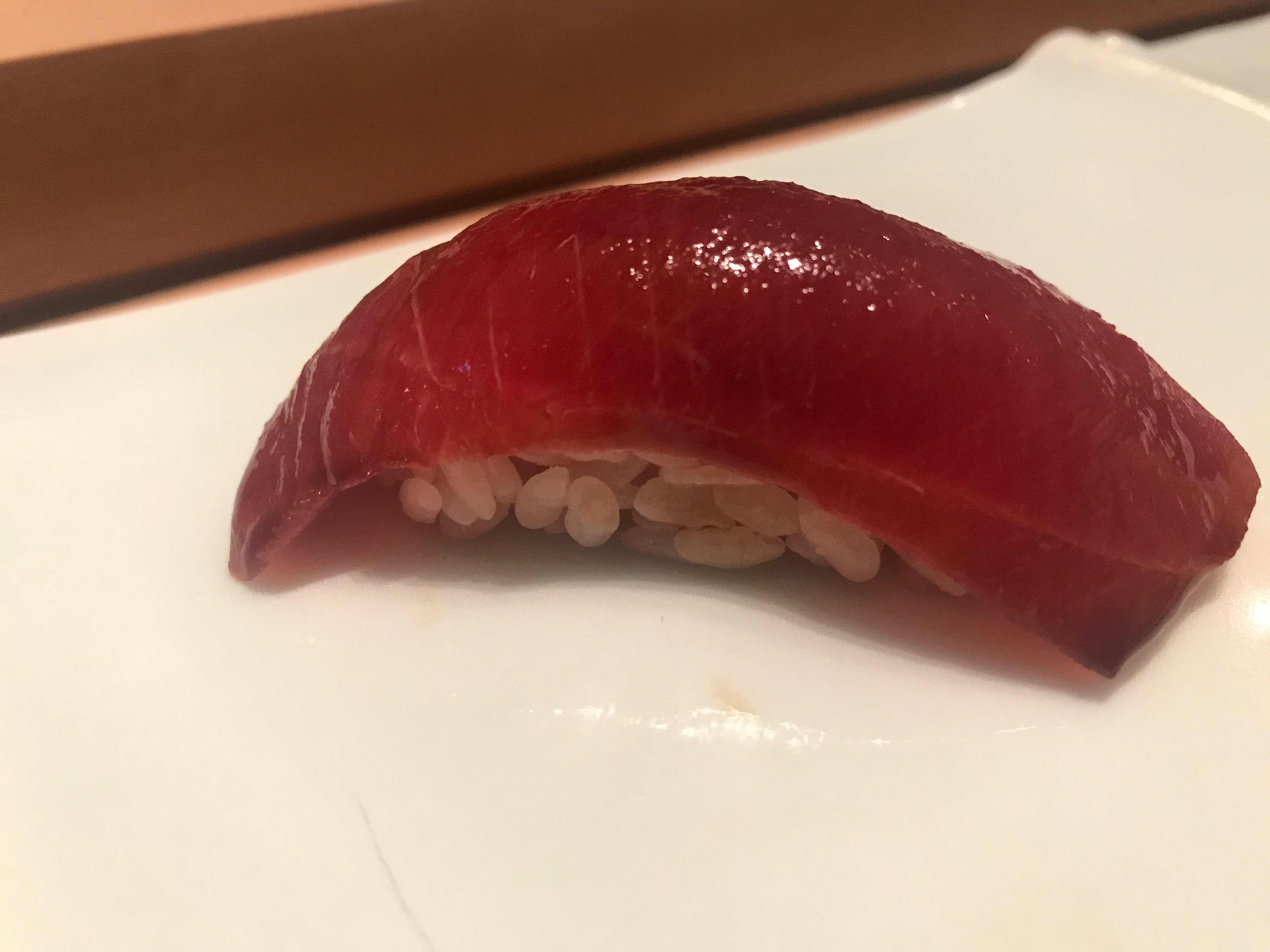 Incidentally, the sushi style at Sushi SORA is the Edomae style which apparently came up in the early 1800s to meet the needs of the folks of Edo who led a fast paced life. The style is fairly minimalistic and uses one ingredient apart from the fish to highlight the flavours I learnt and not multiple ingredients. 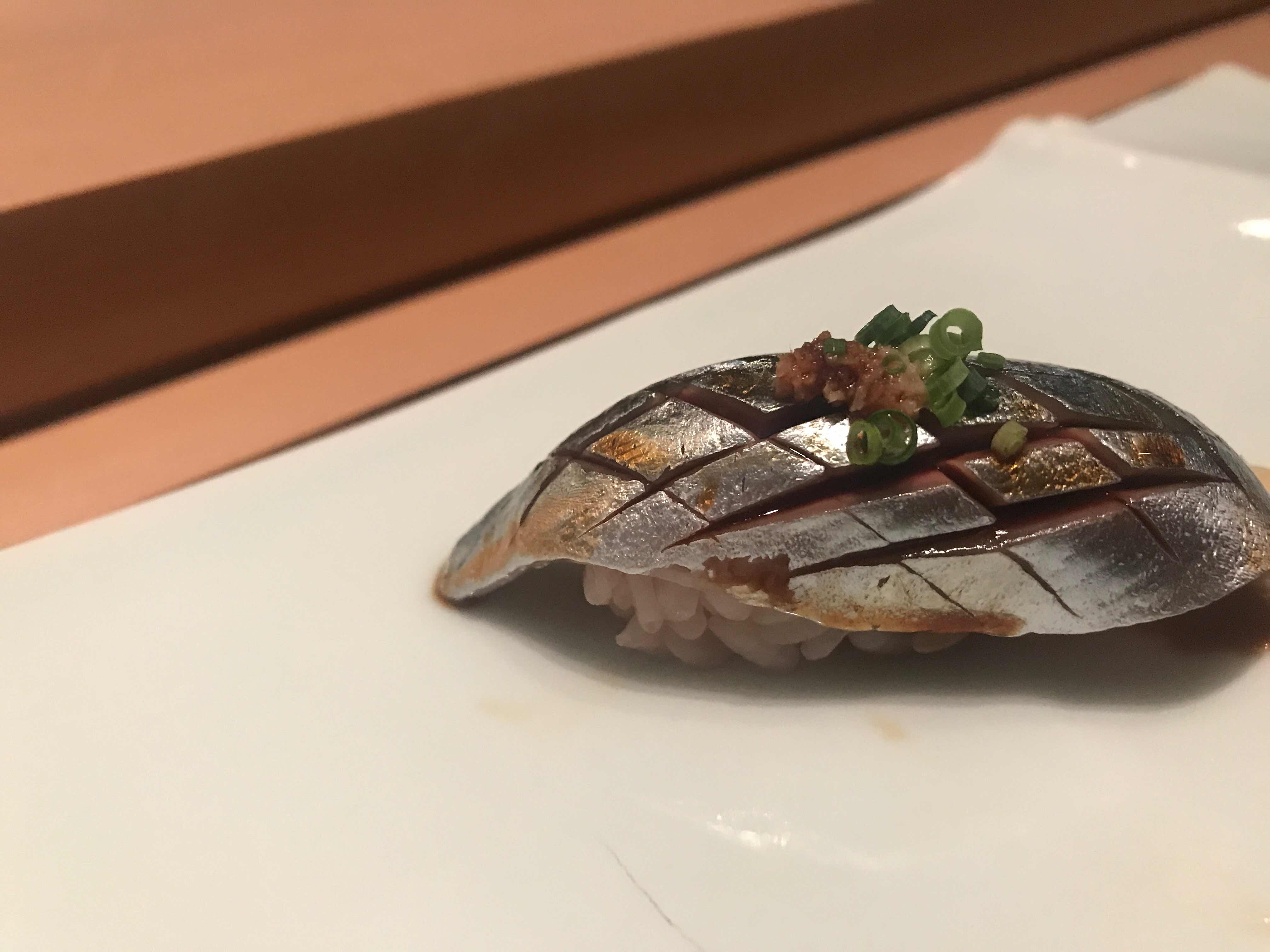 The Edo period is where the practise of adding vinegar to rice started it seems. It was done keep the rice fresh at a time when sushi was a dish sold on street corners. Which is why the fish used then was what was came to the market that day itself. It would get spoilt if kept longer. The freshness of the horseback salmon paired with vinegary rice in the picture above, which was served to us by Okabe San at the Sushi SORA, would have indeed made the Edo sushi masters of yore very happy I am sure. 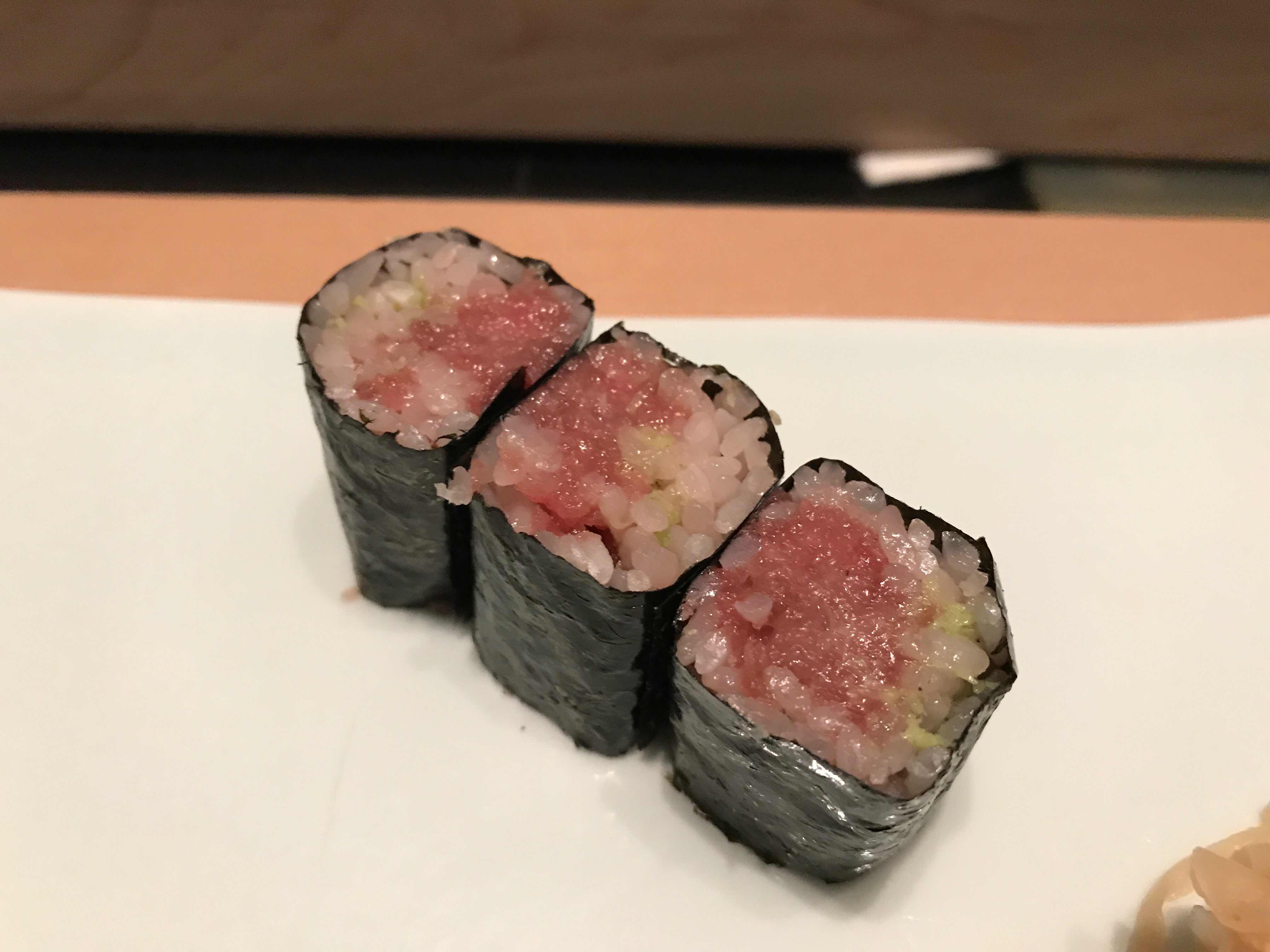 After the nigiri, there were raw tuna rolls too and the intensity of the fish in them was hypnotic.

And what can I say about the grilled eel?

I have had eel before and found it to be a tad rubbery. I took a bite of this and it flooded my mouth with its Durian like creaminess. This was not like any of the eels I had known so far. 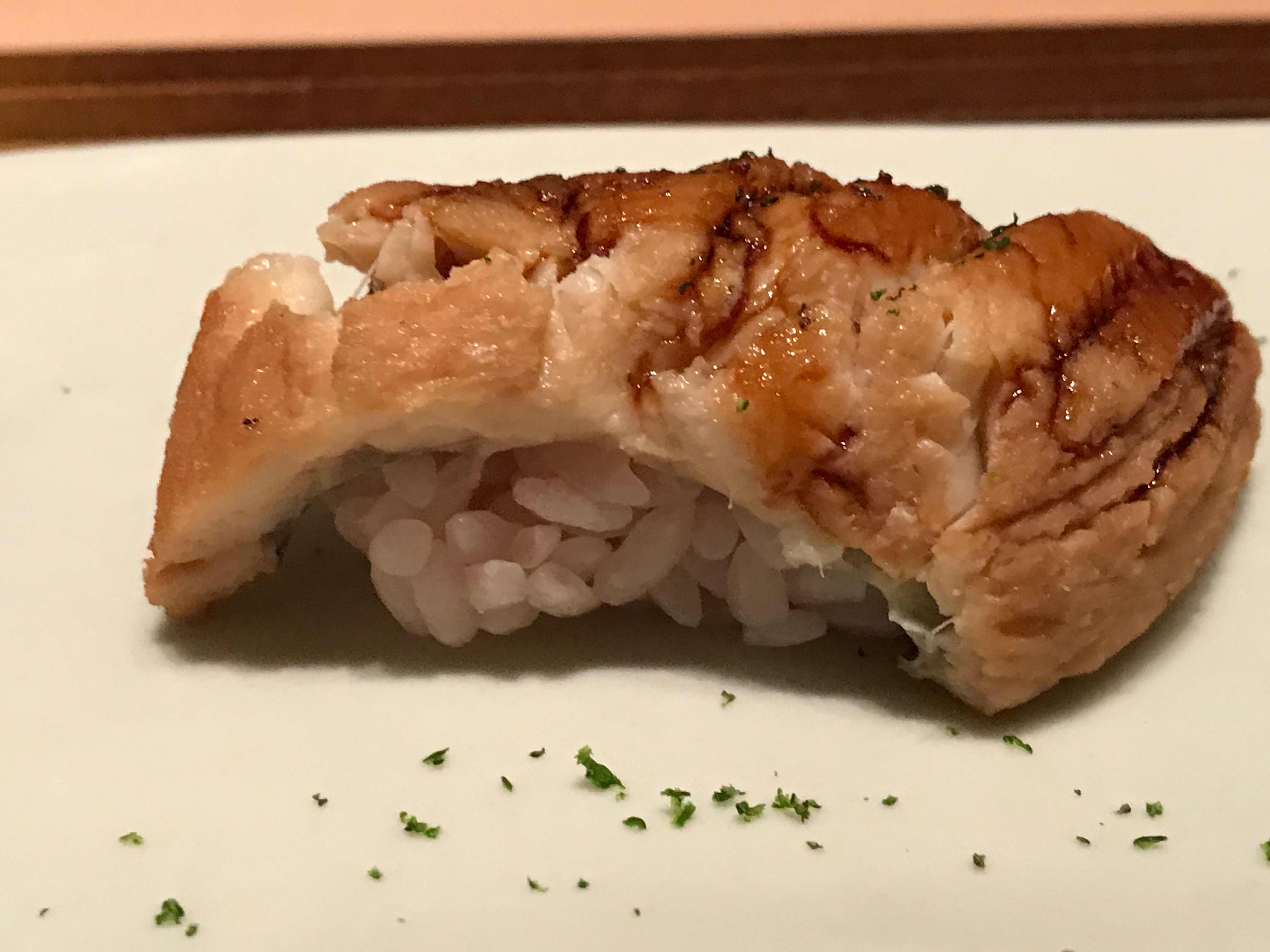 And it was not just the astonishing quality of fish that stood out in the dinner. It was a display of great human skill and dexterity too. Okabe San has been making sushi for thirty years and his devotion to his craft showed in the exquisite balance of flavours that he brought to each sushi by adding the odd squeeze of lime here and dash of salt there or a whiff of wasabi or a dab of soya. The look of concentration that we saw in his eyes translated into the brilliance of every grain of rice in the sushi. The rice was served at room temperature and yet each grain held on to each joyously, not a single one fell off even though I took a million pics before each bite, but then this was the experience of a lifetime after all. 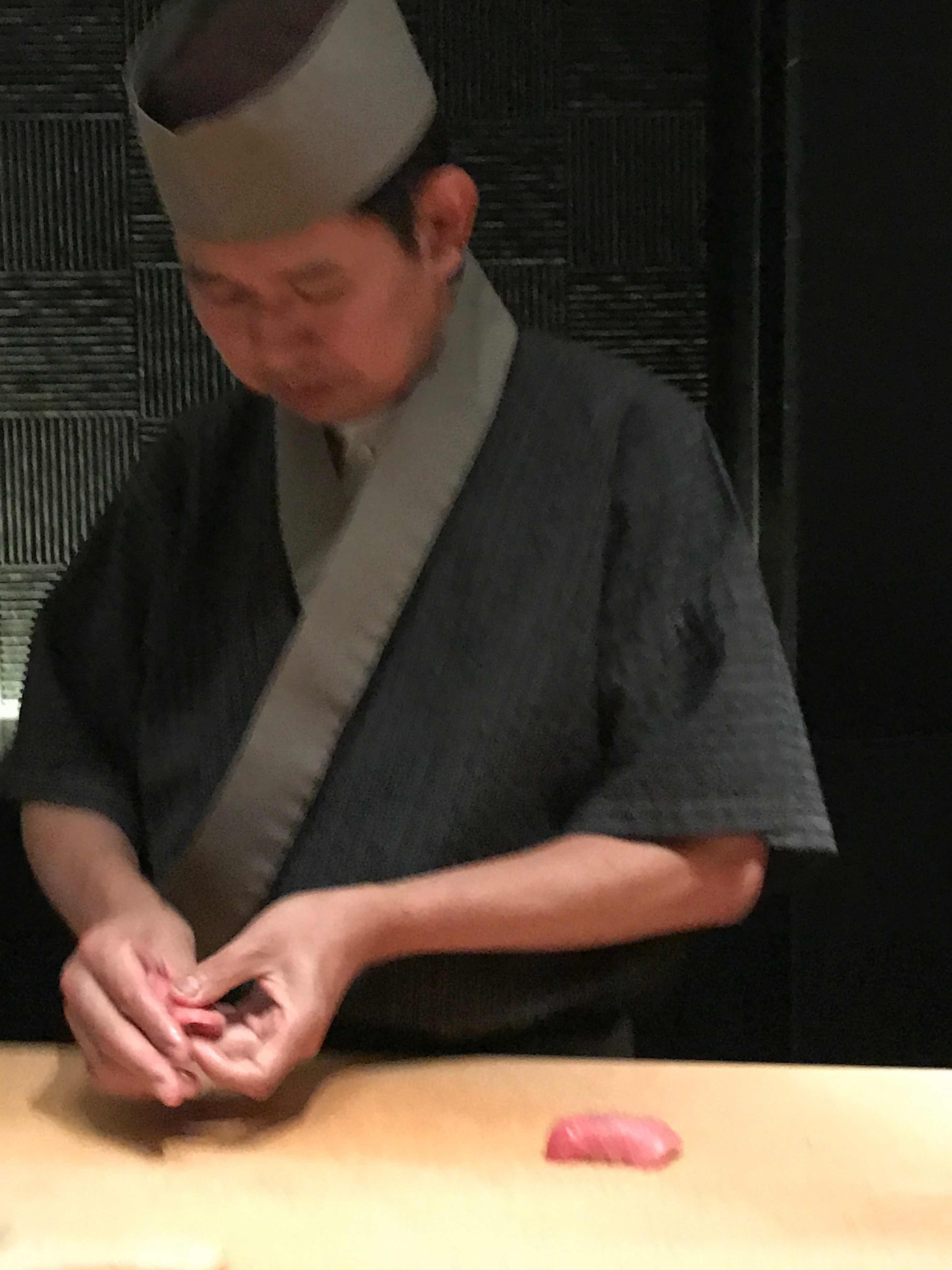 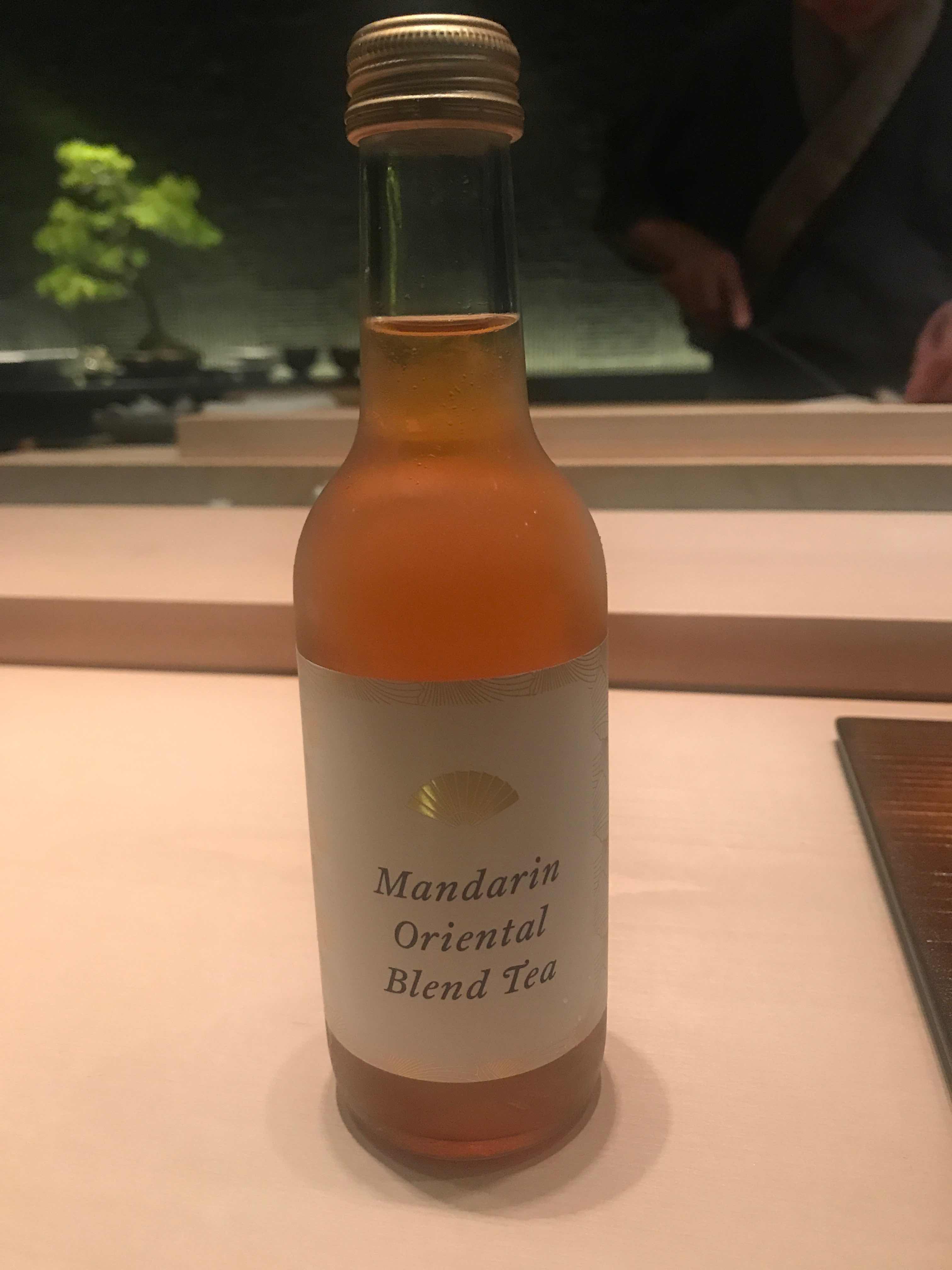 I must mention a couple of side stars in the act. The iced tea which is made in house at the Mandarin Oriental and which was so refreshing and the dessert meant to represent Mt Fuji, a pudding surrounded by pineapple which sounds mundane but had us two dark chocolate lovers in their spell. 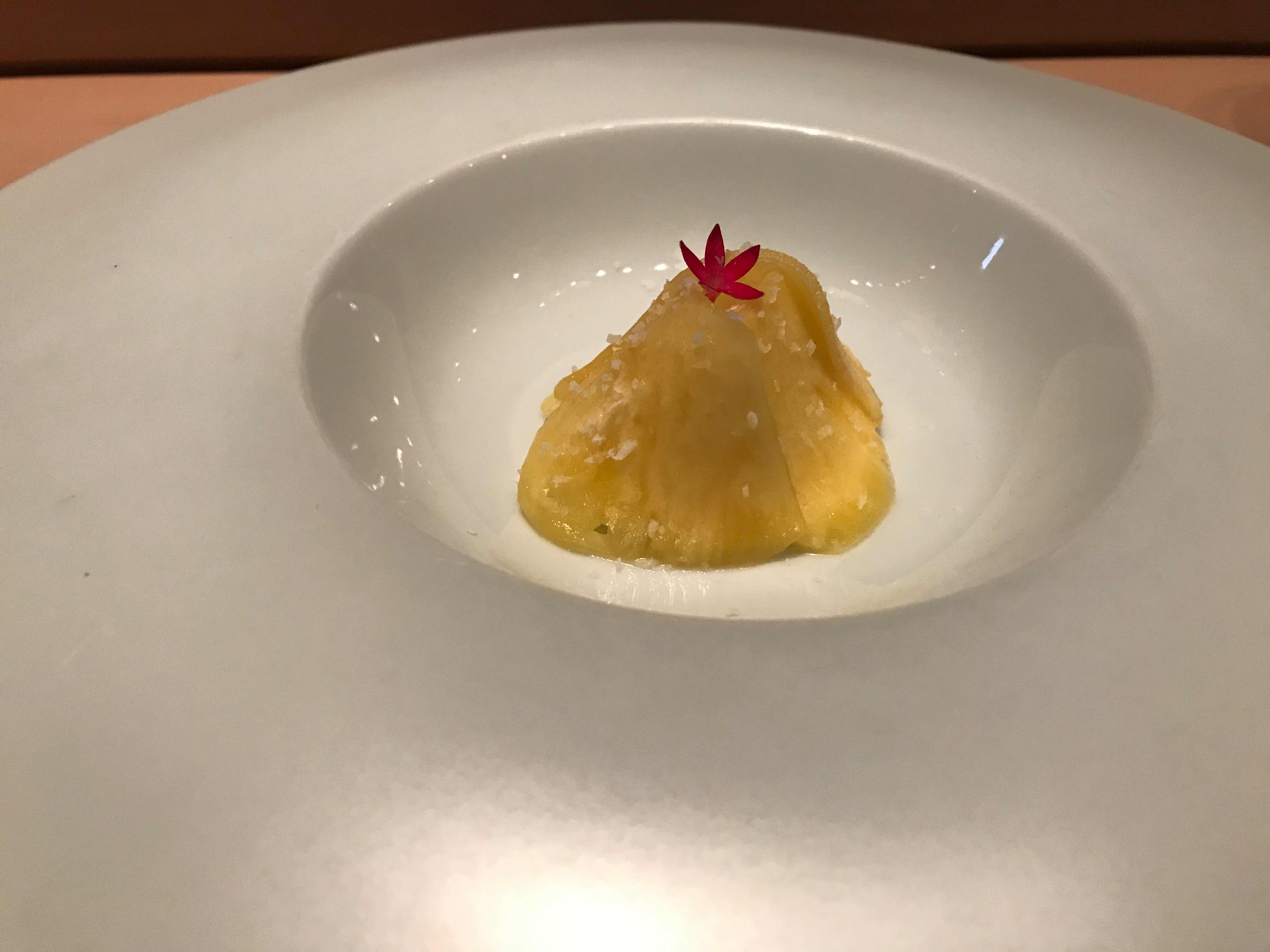 The only ‘problem’ with the meal was that I do not know how I will ever be able eat sushi again. Will any sushi I ever have after this be able to match up to the memories of what I had at Sushi SORA last night?
I have my doubts.
Do I sound a bit carried away? Well, I was so, to be truly honest. 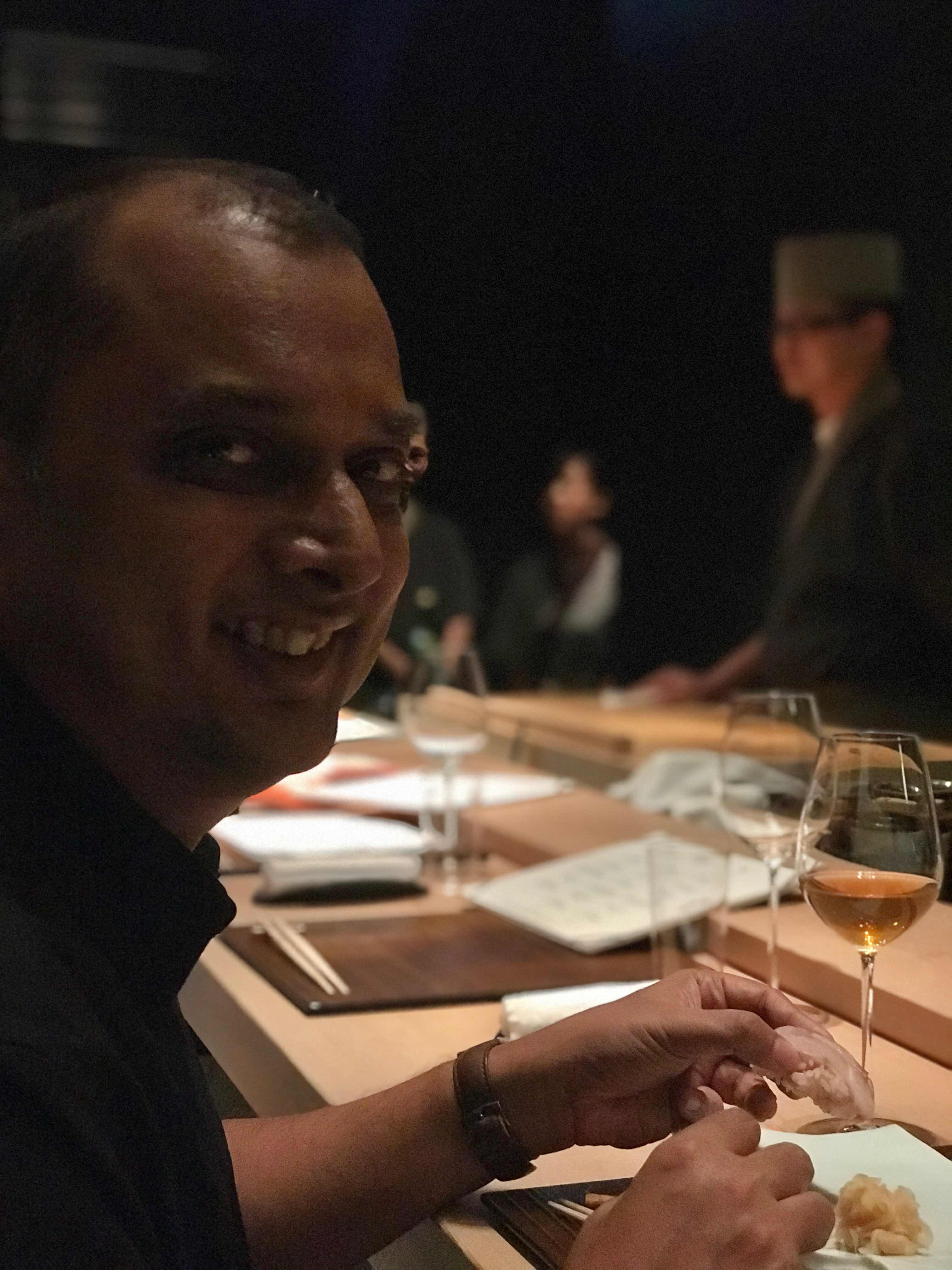 I would like to thank the wonderful folks at the Mandarin Oriental, Tokyo, and Sushi Sora for inviting us for the dinner and for their hospitality during our stay. 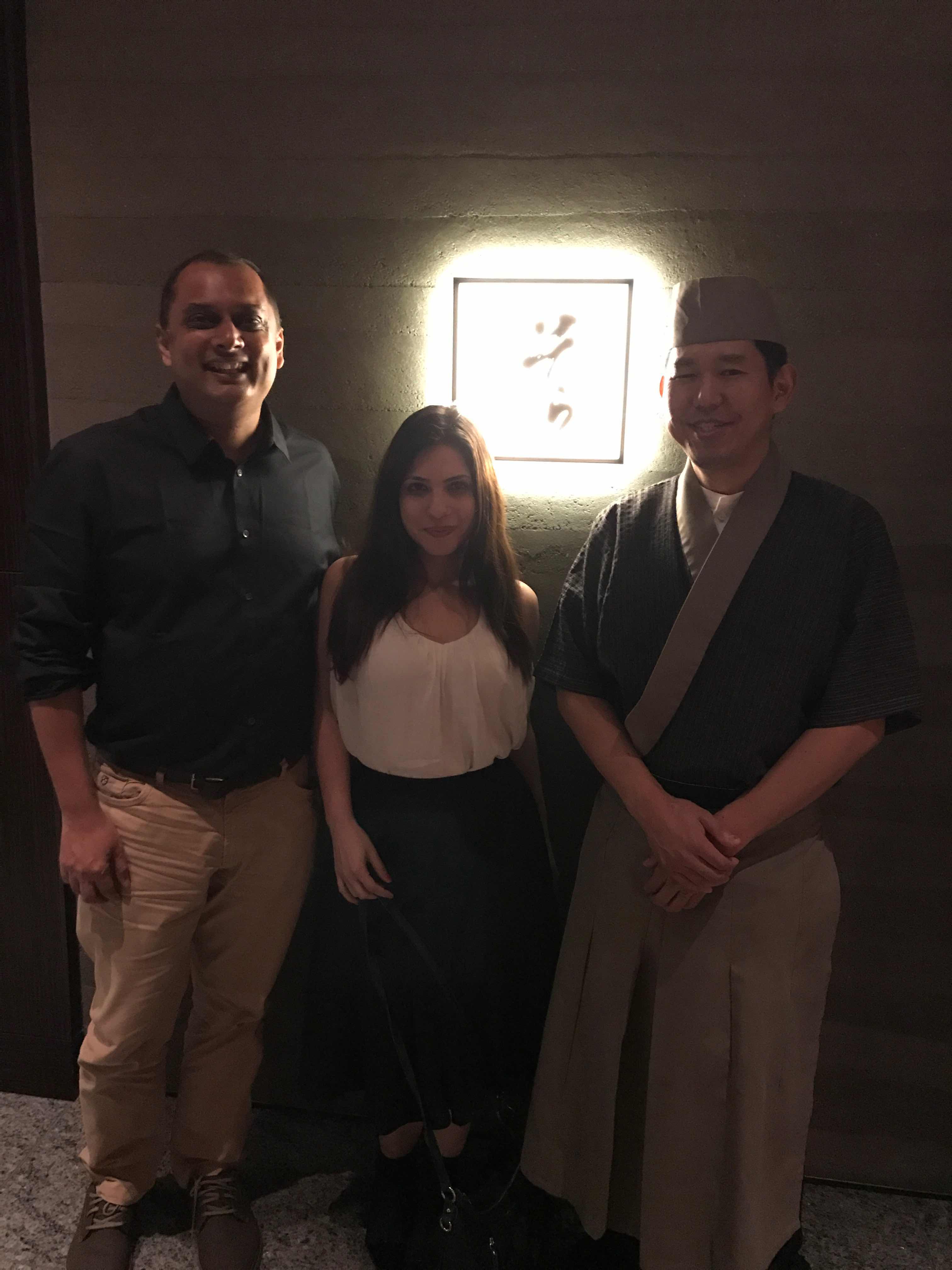 PS: There are pyjamas in this room too and that’s me writing this blog in my ‘Japanese style pyjamas’ in our lovely room room at the Mandarin Oriental, Tokyo. This is our third stay in a MO Hotel after Hong Kongo and Singapore and we sure do love the comfort and luxury that they stand for. 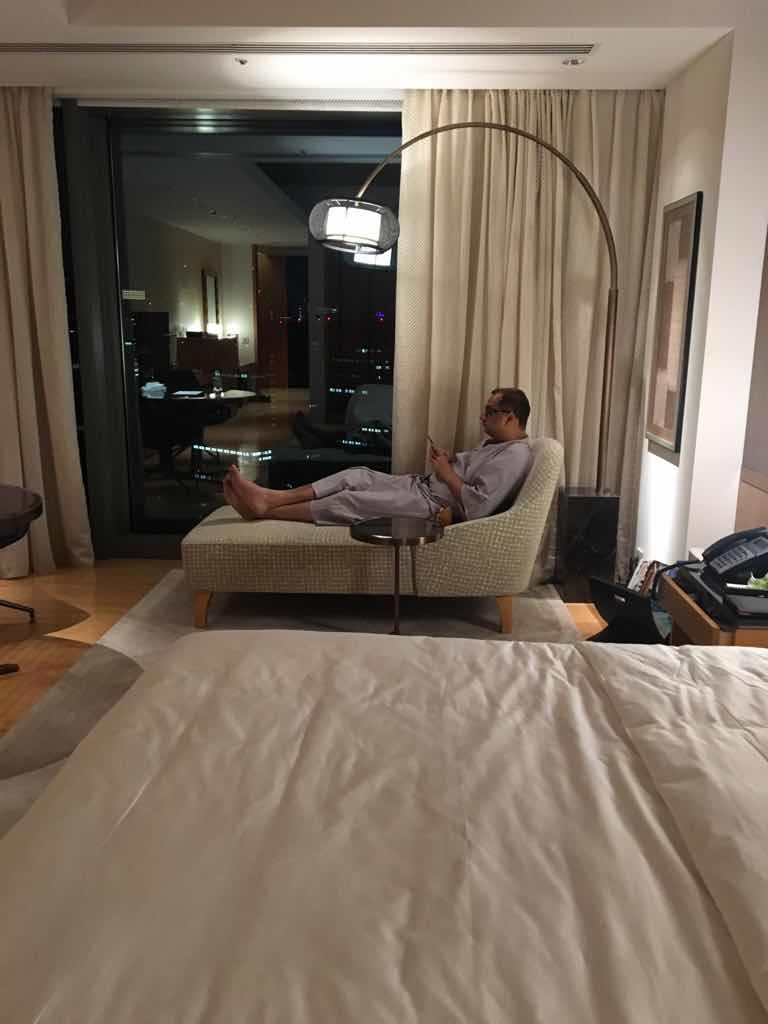 You can read more about the Edo Mae style of sushi here: http://sushischool.jp/what-is-edomae-sushi/