The carby comforts of butter, cheese & pasta accompanied with an adda with a champ. The recipe for my happiest meal of the year.

I returned home from our friendly neighbourhood cafe, La Folie, last evening and tweeted saying that I had just experienced what I would call my 'happiest meal of the year.' Some replied saying that they were intrigued and wanted to know more. So here goes.

I am afraid that I do not have any pictures of the food that we ate, though at one point I did contemplate clicking a picture of an empty plate of pasta to show just how good it was. Then I stopped myself.

The occasion after all was one celebrating a very private and personal moment of joy and relief for a couple of friends. I was privileged to be a part of it. However, I didn't want to be a bull in a China shop by slipping into my Instagram mode! 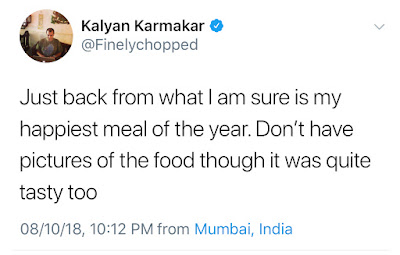 It all started when S tweeted earlier in the day and tagged me, asking for places between Bandra to Lower Parel to go to for a good pasta. She added that the kitchen had to be 'clean' and the ingredients 'fresh.' As tight a brief as one could get.

My answer to the query was La Folie Lab, even though it is a small cafe and not really a conventional restaurant. The thing is, that I trust them when it comes to food and hence recommended it even though I was yet to have their pasta myself. However, I had seen other diners have pasta at La Folie and their plates seemed promising. Yes, I do look at what other diners are eating when at a restaurant. While I did not have a first hand experience of the pasta there, what I did know, is that the produce and ingredients used at La Folie is always great, and that the chefs take a lot of care to dish out good food.

The vibe is warm and cosy, perfect for a gradual return to normal life which the occasion demanded. And it is in Bandra and hence close to her house. 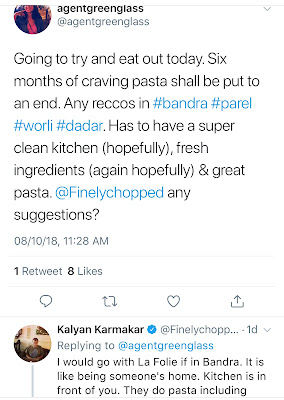 Now let me give some context to the tweet above. A short while back, S was diagnosed out of nowhere with having breast cancer. We were all shocked to hear the news. I can't begin to imagine what she felt.

Not one to give up, S fought back with a lot of spunk, ably supported by her husband A, her parents and family and some friends, who did more than what even family would do. In the process, S chronicled every moment of her fight back, with the aim to give hope to others in the same place as her. As K pointed out, the one thing constant through this period was the smile on her (S') face when she would occasionally put her own picture on social media. A true example of what it means to have a great life force.

I had first known S as a fellow blogger from a time when people used pen names on blogs. We finally met in person at a Christmas party at our place and she 'revealed' her identity and we became friends. She used to work in an ad agency then  and at one time she and K worked in the same agency too as I found out. S then decided to set up her own agency and was one of the first folks in mainstream advertising to embrace digital advertising wholeheartedly.

Coincidentally, I myself switched tracks at around the same time, as I tried my luck at being a freelance food writer  after I had left the world of market research behind. S and her agency were one of the first to approach me with work and paid work at that. I got the opportunity to work with them on some really interesting projects and this was just the momentum that I needed to help me get out of the shakiness that I had felt and I will cherish that support forever.

The carby comfort of pasta, cheese and butter

Coming back to the present, S has finally finished her chemotherapy sessions and is on a short break before starting radiation therapy. This is a significant milestone for her and it is for the first time in six months that she was allowed to eat a meal outside of home. She craved for pasta it seems and hence her tweet. I knew that having an appetite itself was a big win for her as there were bouts during chemo when she would message me saying that she was unable to eat and that she felt nauseous and that made me fret no end.

S and A did go to La Folie for dinner based on my suggestion and most kindly asked me if I would join them. I readily agreed. I felt privileged to be a part of this very special occasion for them. A meal that they had waited for for six months. One that signified a big victory for them.

They were comfortably seated at La Folie when I walked in. Sharing a pasta. S told me that when they had walked in then chef Hemal of La Folie  had gone up to S  (herself) to take the order. S had apparently explained the background to the visit and about how she had been craving for pasta for six months. That she had finally mustered to courage to come out for it and hoped that everything would fall into place.

We almost had the place to ourselves. It felt as if we were in a small and happy cafe in Europe.  I grabbed a fork and joined them in savouring the pasta.

This is the first time that I tasted the pasta at La Folie and it indeed turned out to be as a good as I thought it would be. Tagliatelle made fresh in house, lightly smeared with a cheese sauce. The sauce and the pasta enrobed each other so gently and yet tightly, as if holding on to each other like lovers oblivious to the rest of the world.

The pasta was thankfully not 'drowned in the 'Khar Subway in the rains-like sea of sauce', that pastas in standalone restaurants in Mumbai often tend to find themselves lost in. The pasta was tossed with some flavourful butter sauteed mushrooms and it all added up to a dish that made the three of us smile.

In between bites of the pasta, we tried to catch up with what was happening in each others life. A curious blend of small talk and of questions from me about what S had gone through. I treaded on egg shells I must confess. I did not want to bring back memories that S might have wanted to shut away but I did find inspiration in tales of her valiant struggle.

The evening turned out to be a wonderful adda (Bengali for chat), cushioned by the delightful bed of pasta you could say, but there was more.

Next came a chicken roulade stuffed with goat cheese. It was served on a creamy mashed potato bed which was spiked with a bit of truffle oil, just enough to tease ones taste buds. The dish also starred the most lovely, baby carrots caramelised in balsamic vinegar with which I mopped up some of the mash. We were impressed by how flavourful and tender the chicken was.

And then, as S has developed a taste for caramel and sea salt based desserts it seems, we shared a pastry which had both and was just what she wanted.

It is sort of funny to think now about about how La Folie was first started as a dessert place by chef Sanjana Patel and her husband Parthesh. I am so happy to see how the place has evolved since then.

A and I wrestled over the bill. I wanted to treat them. He would not have any of that.

And then the folks at La Folie brought the bill to us. The bill came with a story it seems with no GST or service charge added.

Turned out that the team at La Folie were as thrilled as we all were with the milestone that S had crossed, and had thrown a party for us without us knowing it. 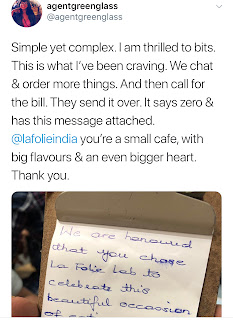 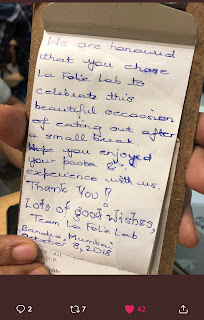 Yes, I do not have pictures of the food but I am sure you will agree that it was indeed one hell of a meal.

Must read: Link to a four part series that S is doing on her encounter with breast cancer.