The case for bringing back the family album. Of birthdays and housewarming parties and Bengali snacks called jolkhabar

It is my father's birthday today. We lost him when I was 9 years old.

Among the many memories that he had left behind, were the piles of family albums packed with photographs.

He loved to take photographs. All our holidays were chronicled by him and his faithful Pentax SLR. As was every event in my life till he was with us.

The day I was born. My first Christmas and Durga Puja in the UK.  My annaprashan (rice eating ceremony). My birthdays and our Christmas parties too. First in the UK, then Iran and finally, Kolkata.

Every gathering at our house, centred largely around my life events and later my brother's too once he was born, were documented through the photographs that my father took. Photographs which were then sorted by our mother, labelled and then put in to albums by her.

It seems that I have inherited this trait of his. My mother would organise small gatherings on Christmas for the family and for our friends on our birthdays even after my father was no more. Not the grand affairs from my father's time but she would do her best to tell us that the show must go on.Trying to ensure that my brother and I did not feel lost without our father.

Trained by my mama (maternal uncle) and also a by a neighbour in Kolkata, a banker who liked photography, I learnt to use my father's Pentax. I would get my mother to buy me a film roll and would then take my dad's place and take photographs on these occasions.

Studies over, I moved out to Mumbai from Kolkata and lived alone for a while in a PG. Then I got married and we rented a tiny apartment.

Birthdays were celebrated again here. My wife's and mine. And wedding anniversaries. New years too.

My in laws would join us on these days and I would take pictures in the Kodak automatic camera that we had bought and together my wife and I began filling albums of our own.

The digital age began a few years later. We moved to a larger apartment. I began writing this blog. We made many friends through it. Invited them home for parties and dinners.

I would cook on these occasions. And take photographs. Just as my dad would when I was a child. But with digital cameras this time and then mobile phones. The Pentax was retired.

Our 'albums' would now be on Facebook or on my blog and so it was for years.


Then something strange happened this Sunday.

There was a gathering at our house that evening. The occasion was special. It was a sort of house warming party, albeit a year and a month after we had moved in to our new house. The apartment was filled with dear friends and well wishers. The occasion was also that of a Buddhist enshrinement and we chanted first for joy and happiness and for our house to be blessed.

A friend's daughter had baked the moistest and gooiest chocolate cake for the day. The food for the guests had come from Amit Roy's Peetuk Restaurants.

The atmosphere that evening was happy. Our guests, mostly, non-Bengali, loved the food. This reminded me of the pictures in my birthday albums from Canterbury, Liverpool in the UK and Rasht in Iran, where the guests would be locals, treated to Bengali delights by my parents.

I then smiled as it struck me that his birthday was two days later so in a way, this was my turn to throw a party for him!

There was so much food that we packed doggy bags for our guests and packed tonnes for our cook Banu who had helped us serve the guests. I had the leftovers for the next couple of days, converting the kochuri into egg rolls in the morning and then pairing the googhni in the evening, not with the soft pauruti (loaves from local bakeries of Kolkata) but with sourdough breads from Bandra. 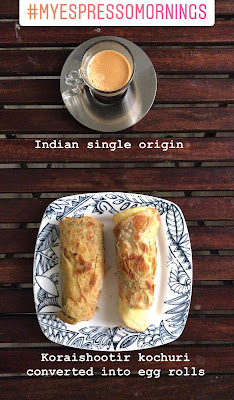 A friend's six month old daughter had appointed me as her babysitter that evening it seemed while her parents ate. I happily carried her around in my arms through the party while K looked after the guests.

Then folks left and that's when it struck me that for the first time in my life there was a party at home of which there were no photographs. No pictures of the guests, of us or of the food.

My dad was not around to take them. I had forgotten too. This had never happened before.

That's when the doorbell rang again. It turned out to be another friend who had come for an adda. We offered her some food while I clicked a picture of the food that had been served and then, just after she finished eating, we got her to click a picture of K & me on that special day.

PS Unlike in parties in the olden days, when only the host would click pictures, it turned out that there were some pictures of the evening which our friends had taken on their mobiles and they sent those to me and I have put those here too. 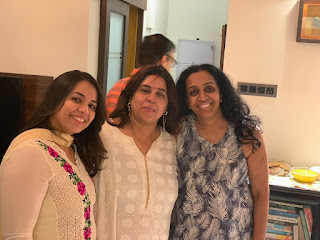 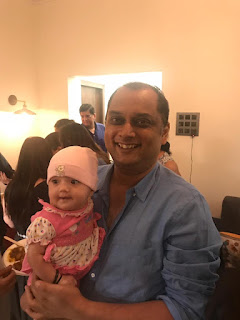 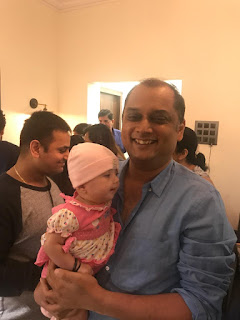 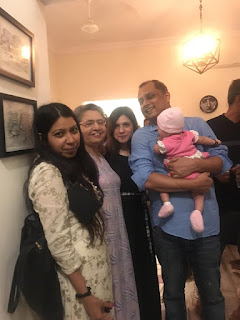 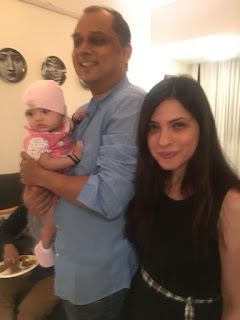