I was on a flight to Kolkata recently when a lady in the flight introduced herself to me and said that she follows me on Instagram.

This has happened to me earlier too in the recent past. Where people have come up to say hi and then said that they follow me on Instagram.

Now, it seems to be all Instagram. You do not need to crunch excel sheets to know which social media channel is trending in the food world at present!

However, as I said in an interview to the Times of India in Kolkata during the trip, while I do enjoy Instagram, my blog is most special to me.

Which is why I realised that I should share some news here on the blog. News which you might have read about already if you follow me on my social media channels. Yet, I am very excited by it and thought that I should tell you about it here too.

The first edition of the Times Lit Fest Kolkata

I had gone to Kolkata for the inaugural edition of the Times Lit Fest this weekend. As a listener of course, but as a speaker too!

This was the first time that I had been invited to take part in a Lit Fest as an author and as a speaker. Fittingly in the city where I had first fallen in love with books. Where I had first dreamt of writing one. The city with the some of most passionate of readers around.

In a lit fest organised by the newspaper which has been my companion ever since I left Kolkata and moved in to Mumbai two decades back.

A fun day at Blandings

My day at the Lit Fest was rather Wodehousian one could say in retrospect.

The Times Lit Fest Kolkata was held at the Tollygunge Club  and it sprawling greens and grand white Victorian buildings left a rather Blandings Castle-like feeling.

At the venue, I was part author...recording videos, meeting readers, posing for selfies...and part son and nephew too... for Kolkata is home, and my mother and mesho and mashi were there to show their support.

The blend of the two worlds left me with a very Bertie-Woosterish feel.

I did feel a bit like Gussie Fink Nottle (sans the vodka spiked OJ) too, when I got up on the stage. The moderator of our panel had to be changed at the last moment it seemed due to logistical reasons and this had everyone in a flurry. A fresh moderator was required as the panel was supposed to feature just the two of us.

I did not have to engage in a conversation with myself at the end though thankfully. Jhimli Mukherjee Pandey from the TOI, Kolkata, donned on the moderator's hat. She had interviewed me at the TOI office a year back when my book was released and had done a lovely article on it then so I was happy to hear about the change of plans. My friend, Sanjoo Malhotra of Tasting India, was around too and I got him up on stage to make a Hans Solo-like entry, pardon the mixed literary metaphors.

We started off by talking about our food experiences from our childhood days in India and abroad, before I switched gears and went on to what was the original topic of the discussion, 'food knows no boundaries.' A topic very close to my heart and which, at some point, I converted into a discussion on biryani and a bit on the 'Chow' culture of Kolkata.

This dish focus was noted by the audience it seems, as the audience interaction later showed. Among those asking questions, we had a student asking about points related to her PHD thesis. The topic of her thesis?

There was a lady from Scotland who sat through the session and who told us about how she has finally realised during the discussion why the Indian food in Scotland tasted nothing like what she had just tried India and why the Chinese food in Kolkata tasted nothing like that she had back home. This flowed from our chat on the story of the migratory travels of human beings and thereby, their food.

Talking of food, we had a lovely vegetarian Bengali lunch after the panel at the Author's Lounge at the Tollygunge Club put together by the team at the club under the leadership of Gautam Nandy. It featured luchi, alur dom, begun bhaaja, chholar dal, pulao, chhanar dalna, kuler chutney, doi and roshogolla. To be honest, a more French fare is what one would have associated ye olde Tollygunge Club with I guess, and what would have been approved of by Anatole of Blandings too, but the Bengali fare was quite a pleasant surprise for me.

I got to meet some of my icons during the time that I spent at the Times Lit Fest. The Bengali writer Shankar for example, whose book Chowringhee, I had found most inspiring when I had first begun blogging. I had read the English translation of the book though. Coincidentally, the translator of the book Arunava Sinha, was in the panel that followed mine.

Mr Sinha made an excellent point about the fact that it is time to realise that 'translations' actually represent a literary genre of their own and are not just a mere technical process. My wife loves the works of Marquez and Murakami and that's all thanks to the writers who brought their words alive in English. So I completely get what Mr Sinha said. He brought Chowringhee alive for me after all.

Shankar told me about the two books that he has written in Bengali on food. He told me that he hopes that the genre of food writing develops and grows in India and said that he felt that it was still not given the importance that it should. He then added, "but one cannot be a critic if one is invited by a restaurant to write. One has to go out by oneself to discover gems."

I couldn't have agreed more.

The other wonderful and reassuring experience was listening to Ruskin Bond at the start of the festival. He and Shankar received the lifetime achievement award at the festival.

Here are some gems from what Mr Bond said which struck a chord with me:

"You should enjoy the act of writing."
"Do not be in a hurry to get published. Do not pay someone to publish you. Let them pay you for it"
"Respect the language in which you are writing."
"A writer should be able to write anywhere." (While talking about how he found his writing spot in Simla)
"I write from my life. As if I am writing a journal."
"I open the dictionary everyday. Learn a new word. Play around with it. Try new things."

Thank you for the inspiration Mr Bond.

Thank you for having me over Times of India.

Big thanks to everyone who came to support me in person or could not make it but sent me their wishes.

To Hachette India for publishing my book, The Travelling Belly, and which brought me here I guess.

And above all, thank you Kolkata!

Here are a a couple of articles written by journalist Amava Bhattacharya from TOI Kolkata, who interviewed me before the session and covered the session too.

1. Speaking about what the blog means to me in the Times of India.

Here are some more stories from what was a most unforgettable day at the Times Lit Fest Kolkata:

On meeting Shankar and giving him a copy of my book: 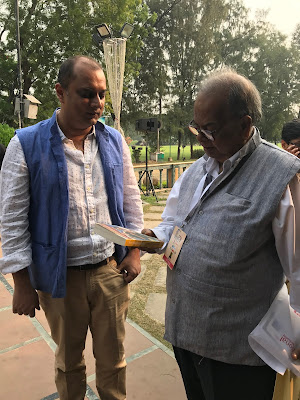 And then I went and met Didu at the end of the day! 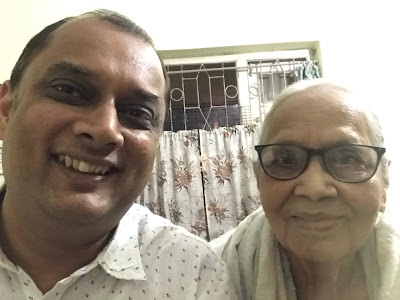 We were put up at the JW Marriott Kolkata, by Times Lit Fest and here are some pictures of the lovely room that I was in. 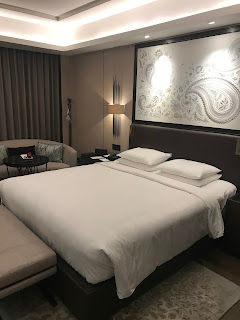 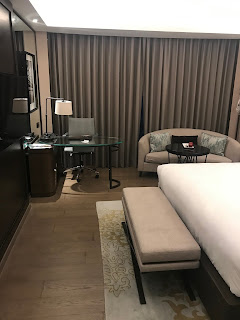 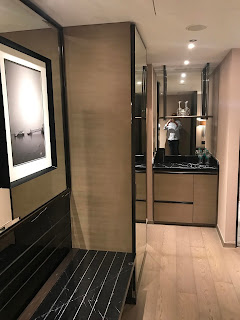