The sandwich that drew me back to Mumbai twenty years back. Yet another #FinelyChoppedBreakfasts story.

Breakfast today featured an egg salad sandwich served with a huge side order of nostalgia. Let me explain why.

This is because it took me back twenty one years, to the time when I had come to Bombay on a training stint with IMRB PQR, the market research agency. I had just graduated out of B School and this was my first time away from home. What was meant to be a two month stay before I returned to Kolkata, became a three month one, and it was finally six months before I got to get back! I was miserable after the initial few weeks and longed to return to the life I had left behind in Kolkata.

What I did enjoy though, about my new life in Bombay, were the friends I made who, like me, had come to work here from different parts of the country. And, the many new dishes that I got to try in the city.

One of them was the grilled egg salad sandwich from a place called Oven Fresh at Shivaji Park which we used to call for from our office at Dadar. I was introduced to it by someone called Rashmi Varma, who was slightly senior to me in our team then.

Grilled egg and mayo sandwiches had not really featured in my life till then in Calcutta and I marvelled at the one that I had at Oven Fresh. The way the crunchy buttery bread gave into the mayonnaise doused pieces of boiled egg, was a hedonistic experience which made the boiled egg and buttered bread, with crushed black pepper, sandwiches that I had grown up on in Calcutta seem rather missionary in comparison.

It was not just the egg salad sandwich that I loved at Oven Fresh. I doted on their chicken salad sandwich too. And the tomato soup. And the chicken wings. We would order these at work when we were working on weekends, which happened too often might I add, and those were the only high points of such days for me. The blessed Black Forest cake from Oven Fresh was a fixture on birthdays and farewells at work. I was so bored of it towards the end that I ordered the almond tea cake from Oven Cake instead on my birthday. Plus it was cheaper and I was just a trainee then.

I eventually got my 'release' and returned to Calcutta. To cut a long story short (something that I rarely do), I got bored of the city within a year. Most of my friends had moved out to study more, or work elsewhere. Work seemed repetitive as most of the research that I got to do was on the cigarette category.

Above all, I missed the taste of freedom that I had savoured in Mumbai.

I decided to move out and sought a transfer and luckily both my mother and Jasojit Mookerjea, our office head in Calcutta, understood and let me go.

I returned to IMRB in Mumbai, as the city was called by then, just as the 90s were about to end. Rashmi became my boss as I joined her team. She took me and the team out to a restaurant at Worli to welcome me back.

I was in for a shock though. It is not just the name of the city that had changed. In a completely unrelated incident, Oven Fresh had tuned vegetarian! I was told that this was due to the owner’s following a certain spiritual guru. I do not know more details on this but I do know that Oven Fresh still remains the darling of Shivaji Park from what I gather, and we have visited it a few times too.

The egg and chicken salad sandwiches and the chicken wings of Oven Fresh were gone too, but by then Mumbai had got under my skin and I did not leave it again.

Last evening K and I had dropped in at the house of Pia Promina Dasgupta Barve at Bandra. She had invited us and another friend of hers for dinner.

We spent three hours together, with her husband Hemant Barve whom she calls both ‘Brave’ and ‘Buddha’, joining us. The table seemed like the perfect Christmas table as it creaked under the procession of rarely seen classic treats that kept coming out of her kitchen and her fridge till we said 'enough' at midnight. We could not eat anymore!

My favourites from last night were the egg salad, the freshly baked bread, the Boursin like  cream cheese spread that she had created, tongue roast with an East Indian masala based sauce on the side, the green salad in a home made vinaigrette,  and the Christmas pudding. 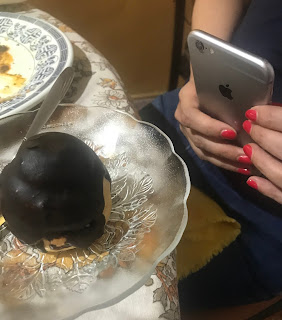 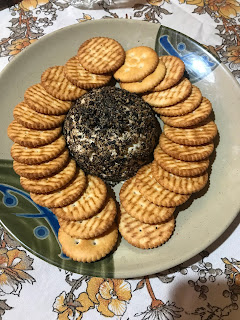 The score for K were similar except she would for the profiteroles that Pia makes and that she loves, as she prefers that to puddings.

There was more of course. Salt encrusted baked Norwegian salmon, cured smoked salmon, boiled ham, roast duck, pork pie, steak and kidney pudding ...till we told them to stop. We wanted to save place for dessert.

All made by Pia and her 4 Nepali elves (kitchen staff) who work with her in the kitchen. The food was a part of a ‘Colonial food of India’ pop up meal that she had hosted the day before to a packed house we were told.

When we left for home, Pia packed the remaining profiteroles (she calls them eclairs in case you or) for K and I requested her to give me the remaining slices of bread and whatever was left of the egg salad.

Bread, wonderful bread. Baked by Foxy whom Pia has trained. Check out the butter. Ooomph! 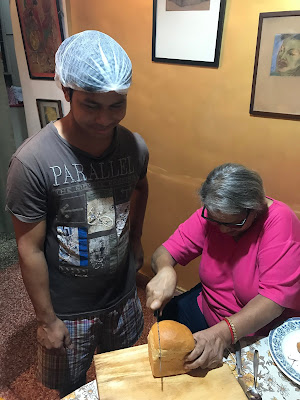 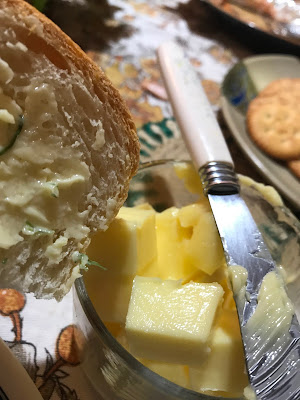 This morning, I heated my new Prestige electric griller while I sat to chant. I then applied a few drops of extra virgin olive oil on each of the slice of bread and dabbed the oil with a spoon to spread it across the bread. I then put in Pia's egg salad in between the two slices and popped this into the pre-heated sandwich grill.

When done (15 min later on medium heat), I made myself an espresso using my new Nespresso machine, and sat down to enjoy my egg salad sandwich with it.

This time, as a newbie food writer and not as a market research trainee.

I said a silent thanks to the folks at Oven Fresh, whose egg salad sandwich had brought me back to Mumbai, and thanks to which I am leading the life I lead today.

It is the International Migrants Day after all today. A good day to remember all who welcomed me to their homes in Mumbai and fed me and pampered me till Mumbai became my home too. It's time to pay it forward I guess.

'Tis the season to be merry