How I cooked my first scampi for a rather tough cookie

Do you like cooking for yourself? And, if you do, do you like to make your food look pretty before you sit down to eat? I do!

Today I made lunch with ingredients that I had never cooked with before. Hand-made tagliatelle which I tossed with some finely chopped broccoli and bell peppers and then smeared with fresh pesto and a bit of salt.

The pesto, pasta and peppers were part of the thoughtful basket put together by the kind folks at Grand Hyatt Mumbai at the end of the Hyatt Dining Club announcer lunch that I had gone to the day before.

There was a fresh water scampi, that the folks at Cambay Tiger had sent a couple of weeks back, in the fridge which I finally cooked today. This was the first that I cooked scampi too. 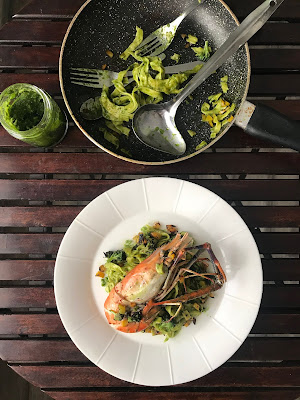 I was rather pleased with myself and like a good Bengali, chewed on the head of the scampi at the end. Not before I blended the heavenly ghilu (brains) with the last bites of the pasta.

Here are some pictures from the Cooking with Chefs lunch organised by Hyatt Dining Club, the loyalty programme of the Hyatt group in in India. I was invited to attend it and we had the ever popular chef Allesandro taking us through a crash course on Italian cooking. I was pleasantly surprised to see Rajyasree Sen, a 'twitter friend' of mine and who has my commissioning editor when she was with Burp and then Scoopwhoop, at the event as the new national director of communications for the group. She was most pleased to know that I had out the contents of the gift box (which also had freshly baked breads, herbs, almond chocolate rocks and a generous slice of parmesan to good use, 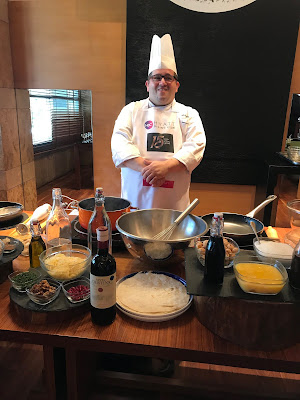 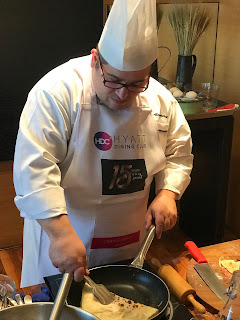 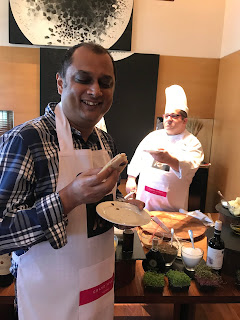 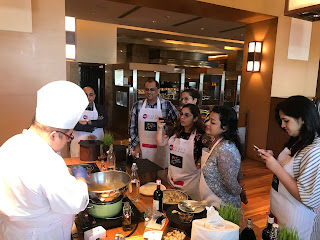 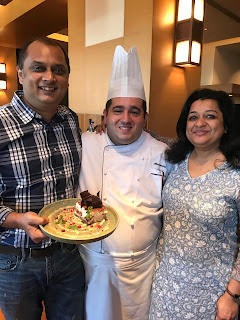 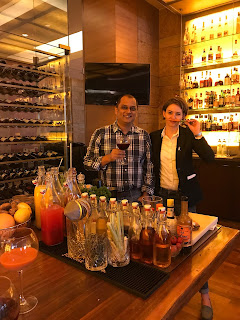