What makes a Calcuttan feel at home in Mumbai's Colaba?

My love affair with Colaba

I might have told you this before but Colaba in south Mumbai is where I first fell in love with the city of Mumbai. This was way back in 1996 when I had come to the city from Kolkata as an MBA student to give recruitment brochures out to companies here. The evenings that I spent walking down the streets of Colaba, after our day's beat, made me fall in love with it.

I came to work in Mumbai as a market researcher a year later and soon decided to make it my home.

You will be happy to know that my love for Colaba remains as strong as ever, if not stronger, 23 years later.

From focus groups to food blogging

I was at Colaba yesterday afternoon and broke into a big smile the moment I got off from my Uber in front of the Taj Mahal Palace Hotel. I had gone there to give a talk to the Rotary Club of Bombay there. The topic was 'Food bloggers and the New Foodie Revolution.' A talk on the current near obsession with food that one sees in India and the opportunities that this has opened for many to follow their dreams. And the role food bloggers have played in helping spur the movement.

The topic was suggested by Ms Camellia Panjabi MBE, the legendary restaurateur, who had most kindly invited me to come and give the talk. I had met her for the first time a few days before this when she had registered herself as a guest and had come to attend the Mumbai edition of the Times Kitchen Tales Indian Food Lovers' Meet. We were thrilled to have us with her that day and to have her share her vast knowledge of the world of Indian food with us. What had impressed everyone in the room was her humility. How she had quietly registered and come and sat in an event where we would have actually been honoured to have had her as the chief guest.

"I like to learn new things and try to go anywhere that there is a chance to do so," explained Ms Panjabi to me when she and I chatted for a bit after the Rotary event. This was on hearing about how excited we were to have her with us at the Kitchen Tales meet.

The half an hour that we spent that together that afternoon at the Taj, the home to her many babies, was precious. Listening to the stories of how she had moved from a sales function in the TAS (Tata Administrative Services) to taking up the responsibility of opening up restaurants at the Taj hotel group was so inspiring. I was awe-struck to hear stories of how she had pushed for having regional India food served in their restaurants, decades before it became trendy. Often at the cost of tackling inertia, ennui and opposition inside, from both the chefs and the management. And of how she had opened restaurants in properties where there were no hotels before, or in foreign lands which were alien to Indian hoteliers. And had opened restaurants which featured food from faraway lands. Goading her chefs to challenge themselves, to train themselves and to discover the unknown and then work their magic.

"I am not a chef," reiterated Ms Panjabi most humbly. However, I knew that it took rare acumen and drive, chutzpah as they say today, to have achieved what she did with the Taj.

Not one to rest on her laurels, post leaving the Taj, she now helps runs restaurants such as Veeraswamy, Chutney Mary, Amaya and Masala Zone in London. Her focus here is on ensuring that the flavours stay true to the flavours of India. Her passion seeped through with every word that she uttered and I felt most hungry to taste the food in her restaurants there. We parted with the promise to explore hole in the wall joints together one day.

At a personal level, I found it rather symbolic that I got to address this august gathering at the Taj Mahal Hotel of all places. Way back in '97, I used to come here as a research executive trainee to help co-moderate focus groups among car owners.

I would never have imagined that I would be here two decades later speaking to industry leaders on a subject so dear to me, food. It has been an amazing journey for me and I cannot but not feel immense gratitude to the city of Mumbai for that.

Are you a Mondy's or a Leo's person?

I stopped for a snack when I left the Taj and decided to go to Cafe Mondegar.

Let me once again take you two decades back. I had realised that the city was divided into two camps a few months into my stay in Mumbai. If you were an outsider like I was then, then you would go to Leo's to hang out. Leopold's.

For those who had grown up in Mumbai though, the choice would be Mondy's. I smiled wryly when I realised how I quietly went to Mondy's this time and not Leo's.

Twenty three years in the city had qualified me to say that I had 'come home to Colaba.'


I ordered a cheese steak burger that evening. As expected, the meat was over done but yet was so beautifully flavoured and seasoned and it was enveloped in promises of buttery love. The bun seemed fresh too. I paired it with a freshly made watermelon juice though beer is what most would have here. That is one reason why we preferred Leo's back in the day. We wanted 'hard drinks' and not beer.

Today, juice works well for me.

I spent about half an hour of bliss by myself at the Cafe. The mood was languorous with the sun setting outside. The conversations between people were hushed and relaxed. The service warm. I got one of the waiters to take my pictures. A lady sitting in the table in front of me, dressed in a business jacket, ordered a beer and cheese and cherries on a stick and then took selfies of herself. A young man sitting behind me earnestly explained to the waiter that he wanted anything in Chinese with a red sauce. He didn't look like a Marxist though. A couple sitting at the table beside beside me, an Indian girl and a French man, explained to the waiter this was there first trip to India and wanted to know if the Juhu beach was close by (god, no!) and whether it was worth going to Dharavi.

"I have never been to Dharavi myself," explained the waiter with a smile while he kindly answered their questions. It was as if everyone was creating their own Mondy's memories that evening like countless others before them and many who followed would. Like blue jeans, these are places that remain unscathed by trends. 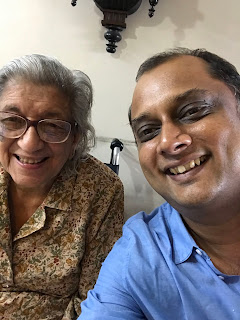 I then went off to visit Perin aunty and spent a lovely hour chatting with her while we had chai and farsan and saw the sun set in the sea from across her veranda. I try to visit her whenever work takes me to south Mumbai. Her brother, our Jamshed Uncle, is no more but the dinners he would host K and me to at the RBYC were a big part of my Colaba memories.

Before heading back home to Bandra, I stopped at the CCI to have tea with Sameer Malkani of the FBAI. He treated me to delicious ham sandwiches (soft bread, lots of butter, juicy slices of ham) and mint tea while he had vada pav, sev puri and bhajiya.

"I am on a diet," Sam explained. Don't ask me how! We batted with aplomb though and finished everything on the table.

We had our tea sitting on the cricket greens of the Brabourne Stadium on makeshift plastic tables and chairs set up by enthusiastic service staff. Sameer and I seemed to be the youngest persons around.

As I looked around, I told myself, "this could only be Downton Abbey. Or south Mumbai."

More pics from the Rotary Meet