With a little bit of choriz in my life. My recipe for a Goan sausage pasta.

Welcome to the Finely Chopped Kitchen. My cooking demo on Women's Day

I was at the Seawoods Green Central Mall at New Bombay on Friday. I had been invited to do a cooking demo there on the occasion of Women's Day.

In the workshop I shared some of tricks and hacks from my kitchen that helps ensure that one does not spend too much time in the kitchen and yet comes out with great tasting meals. One critical aid for this is the prep that one does in advance. Chefs in commercial kitchens do that of course. That is how they the handle rush hour traffic. The preparation in advance in professional kitchens is called mise en place. There's no reason why we should not do it in our own kitchens at home too.

The philosophy of mise en place turned out to be of real time use at my demo. As the demo was held in the lobby of the mall, we could not cook anything in front of the audience due to fire safety regulations. Which explains why I left home for Navi Mumbai on Friday with a travel bag packed with containers full of chopped and sauteed vegetables, boiled eggs and spaghetti and air fryer grilled chicken wings.

Memories of Goa on my plate

There were some leftovers from the demo ingredients which I brought back home once done. Loads of wholewheat spaghetti in particular. I used it the next day to make something which I had been wanting to cook for a while. A Goan choriz pasta. 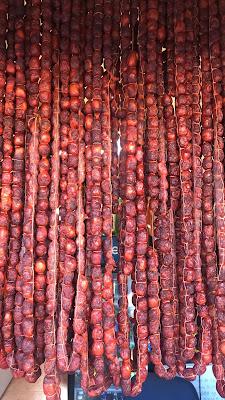 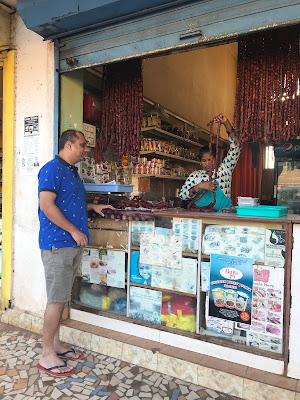 We had gone to Goa in February on my birthday. While there I had bought some rosary sausages from a shop called Dominic's Pork Centre at Varca. I had been meaning to use the choriz in pasta since then and I finally did so a couple of days back.

Rosary sausages are what you might know of as Goan or Goa sausages. The Goan take on the Portuguese choriz. A sort of pickled sausage with a strong spice hit. You get branded ones sold in plastic bags in Mumbai in places such as Bandra. In Goa, you also get sausages sold by the string. These look like rosary beads and hence the name rosary sausage. The latter is made for local consumption and you get it in only a few places such as Varca and Madgaon in Goa while you get the branded ones in a packet elsewhere. The rosary sausage is less sour than the ones you get in plastic bags as its possibly fresher than the latter.

The lady manning the shop told us that she was an employee herself but that the shop was family owned and that the sausages were made close by the family and their staff. I knew that we were on a good thing when we passed the shop on our way to lunch at Martin's Corner and stopped to buy some sausages to take back home and to gift to some friends of ours.

The first Goan sausage dish that I had ever had was the Goan sausage chilli fry. That is how we have made Goan sausages at home since. I wanted to do something different this time though. I wanted to harness the flavouring power of the sausage in a dish and yet without making the dish just about the sausage. Especially since I am not as young as I was when I first fell in love with choriz and having too much of it is probably not that good for me now. Cutting down the amount of choriz had in one meal made sense and that is why I thought of using it in a pasta.

The inspiration for this dish came in the lovely choriz pulao that I had at Martin's Corner on the same day that I bought the sausage. I am talking of the Martin's at South Goa and not the one at Colaba though. The latter is where we first fell in love with Goan sausage chilli fry close to two decades back, but that's a story that I have shared here before.

What I loved about the choriz pulao at Martin's Corner was how well balanced the flavours of the choriz in it was. It embellished the rice but did not overpower it. The end result was so addictive that I packed whatever I could not finish and came back and had the remaining pulao at home the next night.

For those who have not grown up on it, the flavours of choriz can be a bit too sharp and its acidity can be overwhelming. Which is why we add potatoes to our chilli fries at home and have it with pav.

A few years back I had ordered a Goan sausage meal at The Bombay Canteen at Mumbai. I was pleasantly surprised to see that the flavours in it were not too extreme. When I pointed this out to chef Thomas Zacharias, he told me that they had added some regular pork belly to the choriz to amp the pork flavours and reduce the acidity so that it works for a more mainstream (read non Goan Catholic) audience too.

The making of our Goan choriz spaghetti 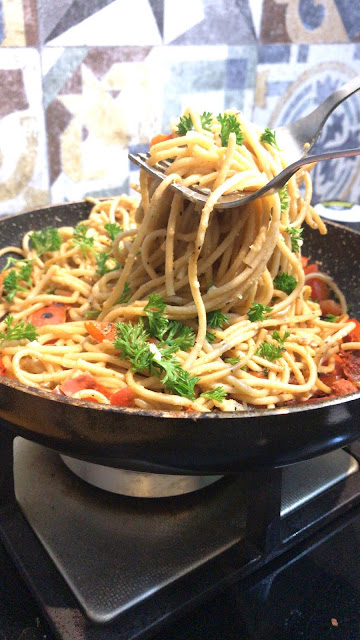 I wanted to do what Martin's Corner and The Bombay Canteen had done with their choriz dishes with my choriz pasta too. Add the flavours of the choriz to it that is, but not let the same dominate the dish.

The idea of a choriz pasta is not novel of course. I have had the Goan sausage Mac and Cheese at the Sassy Spoon at Bandra before it shut down. I found the flavours of the choriz and the cheese to be a bit too over the top there. The Bagel Shop in Bandra has a Goan choriz pasta too but I am not sure if I have ever tried it there.

Here are a couple of tricks that I used to rein in the sourness of the choriz in the pasta. I added a large proportion of braised red bell pepper  to the pasta. Its natural sweetness beautifully balanced the acidity of the pickled sausage in the dish. I used a tablespoon of processed cheese spread (Laughing Cow) too. This added a bit of creaminess but yet was not as sharp as a Parmesan, which I would have liked to use otherwise, would have been. I used only 3 rosary beads of sausage for the dish and that way did not have a pork overload!

I asked my friend Gia Fernandes, a Goan herself, for tips on how to cook the sausage. She suggested boiling it in its skin and then cutting the skin and taking out the choriz and cooking it in the pasta. I did so and this helped me save time too compared to what cooking the choriz from scratch, without boiling it, would have entailed. Some of the oil from the choriz oozed out while I boiled the sausage and I cooked the pasta in the same pan after draining out most of the water. That helped add flavour to the pasta. It helped bring the spaghetti alive as well which was great given that the spaghetti was boiled more than 24 hours back.

I have made pasta with Spanish choriz before but this was the first time that I did so with Goan choriz. I was thrilled with the results and I plan to experiment more with it till my stash gets over. I will then plan a trip to Goa again to get more. 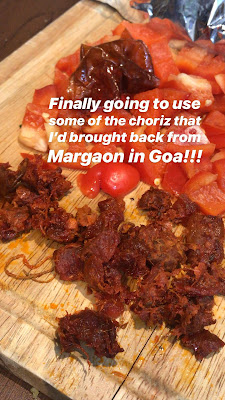 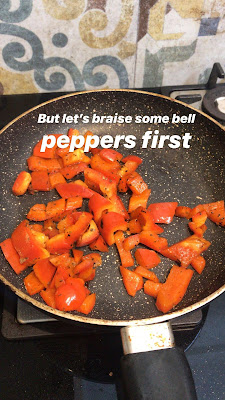 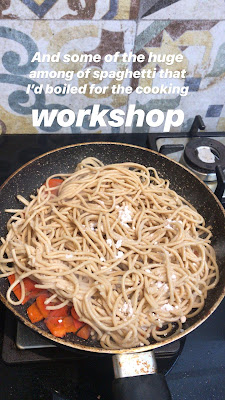 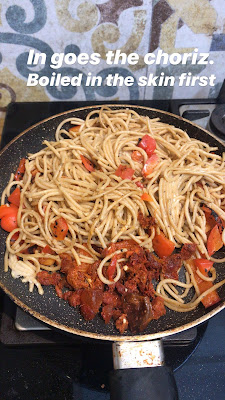 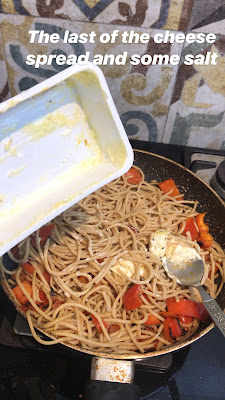 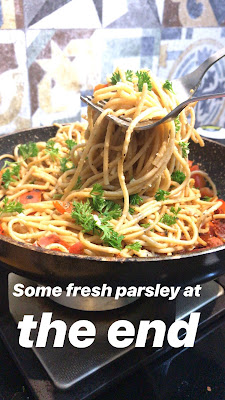