How Bombay brought out the Bengali in me. Shubho Nobo Borsho (Happy Bengali New Year)

on April 15, 2019
My first achievement of the Bengali new year was to watch the first episode of the Game of Thrones Season 8 without encountering any spoilers on social media earlier. Jon Snow couldn't have known less!

It is the Bengali new year today.

I won't blame you if you are confused about this as you might have seen some people wishing folks Shubho Nobo Borsho (happy Bengali new year) yesterday too. I was perplexed as well. I then asked around and figured out what the mystery was. Seems like they celebrate it in Bangladesh a day before Bengalis in India do so.

We do not really follow this calendar anymore after all. Though my grandmother still refers to months by their Bengali names when we speak on the phone and when she discusses the vagaries of weather with me.

My father was born in undivided India and what is now Bangladesh. My mother, in what was East Pakistan and now Bangladesh. They both grew up in India. As did I, though I was born in England. First in Calcutta, which is now Kolkata. Then in Bombay, which is now Mumbai. As of very recently,  I have now clocked more years of my life in Mumbai than I had spent in Kolkata.

Given the migratory patterns in my life, I decided to gracefully accept the wishes of anyone wishing me a happy new year rather than correct them on the date.

The menu is all that matters after all, I thought.

There are different ways in which one connects with ones 'Bangaliana' as Soumik Sen's film Mahalaya, which we recently saw in a special screening in Mumbai, showed.... our love for the arts...music, theatre, cinema, writing... our icons... Tagore, Uttam Kumar... for football... cricket statistics... our penchant for being non-conformists...whether in politics, religion or caste restrictions ...our love for the slow life... our pride in the language and every aspect of our identity... the food... the list goes on....everything leading to a huge chip on our shoulders I must wryly add.

For me, as it is for many of us, it is the food of course.

Which is why, the first thing I did on waking up today, and while still in bed, was to scan my phone for a Bengali new year apt food photo. A quick flip through the album and I found a picture of jilipi shingara and converted it into a Shubho Nobo Borsho picture and shared it on social media before I got out of bed. Jilipi shingara is the stuff Bengali breakfast dreams are made of after all.

The picture  that I posted was metaphorical I must stress and not what I actually had for breakfast today, though many thought that it was so. It was from my visit to a Punjabi owned sweet shop called Madan Lal Sweets in Delhi's Sadar Bazar.

If it is any consolation, the jalebi there did look and taste exactly like the jilipis from Gauranga Mistanna Bhandar, the corner shop in Kolkata which we would often have for breakfast back in the day. Often sandwiched between two slices of bread.

The question of what to have for breakfast consumed me once I got out of bed. It is a Monday too after all, apart from being the new year. The day of the week on which I prefer to take it slow. Funnily enough, my weekends became busier than my weekdays, thanks to social, personal and work engagements, after I became a freelancer.

Should I go to La Folie and have a scrambled egg, I wondered. Or Swiggy in a sourdough loaf from there and make myself a deem parooti. Bengali for savoury French toast and the only Bengali breakfast dish that I know how to make.

While I continued to indulge in a a fair bit of soul-searching on the subject, only a Bengali will get what I mean, the clock struck 11. The Swiggy app showed that Sweet Bengal was open for business. I looked into their jolkhabar (snacks) menu and decided to order everything from it that I love and which would probably cause my doctors heartache.

Koriashootir kochuri with alur torkari (the sweet shop pre-fried version and not the kachori stall freshly fried one), vegetable chop, khasta kochuri (they do this well here though not the shingara) and even a dorbesh, the soft and pudgy Bengali laddoo. In other words ...maida, alu, ghee, lots of oil, sugar...stuff which we have grown up and which they say is not good for us today.

I was lucky today. Sweet Bengal runs out of the savoury stuff quickly after all.

The food tasted delicious. In order of preference it would be the khasta kochuri, the veg  chop, the dorbesh, the alur torkari and the koraishootir kochuri. It was just what I wanted. The day seemed truly special after that.

A kalo cha (black tea) or Darjeeling tea would have been apt I guess but I have always been a coffee person. So a Nespresso Ethiopio it was.

The food was a bit heavy of course and a few polite burps followed. Nothing that a cup of chamomile couldn't fix as I got ready for ready for round 2 of our heavy metal celebrations. That will be dinner that we have called in from Bhojohori Manna. 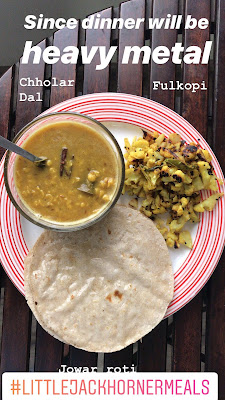 I kept lunch was suitably light. Jowar roti made by our cook Banu, and chholar dal and kalo jeere diye fulkopi that I have taught her to make.

All of what I have written is rather funny and would possibly make my mother smile. I was not keen on Bengali food as a kid after all and she would have a tough time making me eat it.

It was only after I moved to Bombay that I discovered my inner Bengaliness or Bangaliana.

Through food of course.

What a meal it was my countrymen!

Before signing off, let me share a picture from out Times Kitchen Tales whatsapp group today. It is of the silver that this dream project, that I had the privilege to curate, won in the Creative Abby Awards. The category was best branded and native content for a client by a publisher.

As someone who wanted to be a writer in school, a journalist in college and had joined a newspaper as a sub too after college before B School happened, who then joined market research, then advertising but didn't find much creative simulation in account planning, came back to research, then finally broke free to follow ones dreams and write, this felt truly special.

A reminder on the new year that there is no need to settle in life till you achieve your dreams.

If you are lucky, then you will find a partner like I did in K who ensured that I chased my dreams even when I had given up on them. She of course, knows a thing or two about winning awards in advertising and has won many at a global and Indian stage!