I had written a post sometime back about how working from home, with the constantly ringing doorbell, the need to make small talk with people around if they are there, or to address their house keeping or room service or IT support needs, can get rather vexing.

Today though was one of those days that reminded me that working from home can be rather funny too at times.

I went to Candies to meet a friend for breakfast first. I tried the egg croissant sandwich (am in love with the mini croissant sandwiches there these days). I also made myself a sandwich with  a mutton potato chop and 2 slices of toast from my friend's order of omelet, and that was fab too. 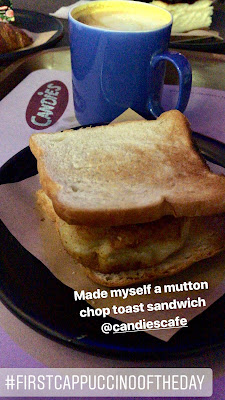 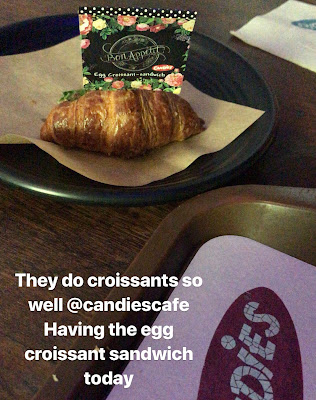 On the way back, I had a chat on the phone with the producer of a video I might be shooting soon. I then came back home, did social media shares of my latest blog posts and then it was time for my physio session to strengthen my back.

We were almost towards the end of our session today when the bell rang. My exercise routine was over by then and I was supine on my belly with various electromagnetic nodes stuck on to my back. I requested my physio to open the door as I could not get up from my Gulliver-like position. Turned out that the bell had been rung by someone who had come to deliver the food that a restaurant in Bandra was scheduled to send at that time.

This reminded me of a rather funny incident from a year or so back. At that time I had a yoga teacher who would come home to teach me yoga. We had almost finished our yoga session that evening and I had gone into savasana, lying flat on my back, eyes shut, mind (ideally) blank, breathing in rhythm. Unlike today, our session that day was in the drawing room of our apartment and not in the study.

Savasana done, I opened my eyes, only to see a young PR lady and a gentleman from the marketing team of a luxury hotel sitting awkwardly on the sofa, trying to appear nonplussed.

My yoga teacher looked at me and said, "we are done for the day, they had come in while you were in savasana and I did not want to disturb you."

I had a meeting scheduled with the hotel folks and they had reached a bit early it seemed!

While I felt good about my being in such a state of detachment that I could not hear the doorbell, I was embarrassed as hell. Next time at a coffee shop, is what I told myself. I am sure that this incident would have been documented in the PR people's digest of 'weird stuff that happens at work'. In my defence, they had insisted on coming over to meet me earlier.

A Starbucks outlet has recently opened outside our house. From now on, work meetings will be there, and catch up with friends at Candies!


When I told my told physio today about the yoga incident, she burst out laughing and said, "you should write these stories down."

Coming to the food that had been sent, it was from a place called Soy Pan Asian Kitchen at Bandra's Pali Naka.

I had seen the place when I had passed by recently and was intrigued by it. Which is why I accepted the restaurant's PR agency's kind offer for a tasting. Given the heat outside, I decided to call the food in rather than go there when given the option to do so. I am told that the basement section at the restaurant is air-conditioned though the seating in front of the shop is non air-conditioned. I chose dishes that I do not have to be eaten straight off the wok and hence no Pad Thai, gyozo or grills. I live a ten minute bike ride away in any case and that helped. In any case, we order in more often than we go out these days to eat to be honest.

I opened the food in the kitchen once my physio left and after she told me that her mother had made her favourite green moong chi usal and jowar bhaakri at home.

The kitchen began to smell like Sukhumvit, the 'Mumbai's Colaba meets Kolkata' Park Street' buzzy part of Bangkok, once I opened the boxes. The aromas brought back memories of the food that my wife and I had eaten from carts on the streets of Sukhumvit, as well as at a restaurant called Soy 5 there, when we had gone to Bangkok for our first international holiday as a couple in the mid 2000s.

The first thing the struck me about the curries from Soy in Bandra, red (prawns) and green (veg) both, was how thin they were in terms of consistency. Just the way I remembered them to be wherever I have had them in Thailand...Bangkok, Chiang Mai, Pattaya, Ayuthaya and the River Kwai. Not the thick and stodgy curry that one gets at many standalone Thai restaurants in Mumbai thankfully. We had ordered a Massaman curry from Mamagoto Bandra last weekend for example, and that was a lot thicker, heavier and sweeter than this, though tasty in its own way. I guess the sugar  in it was addictive.

The second thing that struck me about the curries was that they were definitely not made by a chef who aspired to be a Gujarati thali joint dal dhokli maker. The curries were not sweet. If anything, they were very, very spicy. The chilli heat made me break in to a sweat when I tried the curries (one after the other)  with jasmine rice. I must add here that my tolerance levels for chilli heat is rather low. Both curries were flavourful and distinct though I loved the fact that the prawns in the red one were juicy and not overcooked. That's what the beauty of Asian cooking is about after all.

I thought that I will tell the PR agency that I found the curries a bit hot. Then I remembered the episode on Bo Songvisava from Bangkok that I recently saw on Chef's Table on Netflix. Chef Bo said in the episode that she was working on reviving Thai traditional cooking in her restaurant and if that meant that the food would be spicy, so be it.

Yes chef, next time I will take more rice and less curry perhaps, but enjoy the flavours the way the are meant to be and with poise that would do the reclining Buddha proud.

I tried the egg Khad Pao from Soy. A Thai fried rice. I found it to be flavoured comprehensively enough, with garlic, ginger and sauces too, to make it a one dish meal if required. The taste of the basil leaves were a bit muted though.

I also called for a pork 'mama' from the restaurant. A sandwich made with steamed dumpling bread, pork patty and fried eggs and crunchy Mama noodles. The Mama noodles didn't travel well and got soggy and were rather lost between the patty and the Goan sannas like bread. That apart, I loved the juiciness of the patty and how flavourful it was. The red chillies in it reminded me of the sausages that I had in Chiang Mai and and which are called Chiang Mai sausage. The combination, while messy, worked well.


Lunch done, I messaged the missus and said, "you would have loved this. Will order from the there for you one day."


2. The story of our first Bangkok trip together as a couple.
3. My first trip to Bangkok ever and my mother's blog post on it
4. Post on when I had sausages in Chiang Mai

Disclaimer: This is not an anonymous review. The food made me happy though and I felt that I should write about it. I was also curious to know more about the chef so I mailed the PR agency. Turned out that his name is Milan Subba.  He is a fellow Bengal boy (born in Kalimpong) and is of Chinese descent. He has apparently received his professional culinary training in Bangkok. From Thailand, Cambodia, Hong Kong, Vietnam and Malaysia to Dubai and even Tajikistan. I am sure that he would be an interesting person to meet and share a meal with someday.
Bandra hosted mumbai Mumbai restaurants thai