Disgust and reverence. Tendli, the Indian vegetable that offered it all on Twitter

I was seething with anger when I sat down for lunch yesterday.

What happened? No, nothing serious!

Hunger does that to me and in this case, it was a comedy of errors that led to it.

Our cook, Banu, came late to work after assuring me on the phone earlier that she was coming on time. She does have a rather creative interpretation of the concept of punctuality!

To add my litany of woes, the brinjal that we had called in from the usually bankable Lalu's Vegetable Shop at Pali Market went rogue.

Lunch, according to the menu I gave her, was supposed to be dal, jowar roti and begun pora/ baigan bharta. The problem was that after twenty minutes of smoking it, Banu figured out that the aubergine had gone bad and was refusing to 'bend its knee' (GOT speak for surrender) and get cooked.

There was no plan B at that point.

"Should I fry some potatoes instead," she asked me.

This defeated the purpose though as the idea was to have what I call a Little Jack Horner's Meal (home cooked, small portions, vegetable heavy, low oil, unrefined grains).

Potatoes, and fried at that, would be the antithesis of that. Though they would cheer me up!

Potatoes have that affect on me. As I am sure they have on you.

Tendli to the rescue

"Why don't you cook the tendli (ivy gourd/ kundru) which you had chopped and kept in the fridge yesterday," I replied.

"There's not enough," she said and added some potatoes to the chopped tendli that she sauteed with rai (mustard seeds) and chilli powder, while she made the rotis.

It was 2.20 pm by the time I sat down to eat, and compared to how I felt at that point, Gordon Ramsey in Hell's Kitchen would seem as jovial as Father Christmas would after a pleasing cup of cognac infused hot chocolate.

As I sat down to eat, I suddenly remembered my mother and my growing up days in Calcutta when I would get angry and refused to eat.

Bengali mother son tiffs follow the same pattern. The son wants to do something... go out to play, read a storybook, watch TV/ go to the movies, hang out with his friends...and she will say, "this is the time to study. There will be enough time later in life to enjoy yourself."

In most cases, the mother wins.

When I would throw a fit, my mother would say, "why are you getting angry with the food. Be angry with me. But why the food?"

This would typically end with, "fine, I will not eat too."

If you are Bengali, you would know how that story ended!

What's lunch without a story

"No point in getting angry with the food," I told myself as I sat down to eat.

I took the customary picture for Instagram and then, as I sat to eat, and then this post began to take shape in my head.

The food did taste good, especially the alu tendli. The potato was crisp outside and soft inside and the tendli had a nice crunch to it. My angst was wiped away. I could hear the sparrows chirp again. The crow that comes to our window, came back to say hello. With a piece of roti in its beak. He thinks that our hall is a potluck venue. The missus does not approve of this.

What is tendli, you ask?

Tendli is a vegetable that I had never heard of till I moved to Mumbai and then got married. I think that you get it more in the south and west of India and it belongs to the gourd family.

Apart from the potato, it was one of the very few vegetables that my wife (a Parsi) liked in back then and we would often cook it I was not too fond of it.

It returned to our pantry, almost fifteen years later, with my trying to eat more vegetables these days. I have found out ways to make tendli seem more appealing to me. Just as I have with lau (bottle gourd/ lauki). Another vegetable that I hated till recently.

The trick is to have tendli fresh off the pan I feel, though K does not mind taking it for lunch the next day. As long as they are sliced into circles.

Lightly sauteed with kalo jeere (nigella seeds) and salt and a pinch of turmeric, the Bengali way, is one of my favourite tendli recipes at the moment. Potatoes help of course though we try to avoid them.

Or, sauteed with mustard seeds and curry leaves and the sambar powder that I bought at Mangalore, with or without a dash of whipped dahi added at the end.

Or sauteed and added to a coconut based fish curry as I saw them do at Goa.

I keep trying to find new new ways to cook tendli inspired by various food memories from all over.

I found yesterday's 'tendli rescue mission' a tad ironic and here's why.

A couple of days back Shiv Aroor, a TV journalist, tweeted about tendli for a change and and not politics. He said the he personally found tendli 'disgusting!' Aroor, a seasoned journalist (I do not know him personally), understands Twitter well I guess. The fact that it is a social media platform that thrives on controversy and at times, on hate too.


Say that you find a vegetable, found in the pantries of houses across large parts of the country, 'disgusting,' and if you have 8 lakh followers, and you will wake up people and that is exactly what happened after his tweet.

Tendli haters joined in with their taunts and for a while it seemed like a Dothraki charge out there. There were some tendli lovers who spoke up hesitantly in favour of tendli, but voices of reason are swept away when the mob is out.

Chefs such as Thomas Zacharias and Saransh Goila, big believers in Indian food and on using social media to promote it, tweeted back. They wondered if Aroor had ever had the dish properly and hinted that they could present it in a way different and make the petulant tendli hater fall in love again.


Food writers Mini Ribeiro and Sangeeta Khanna questioned whether it is proper to to use the term 'disgusting' in the context of food.

I did empathise with what they wanted to say. At times I feel the same about the use of the word 'bizarre' in the name of the show, 'Bizarre Foods.'

Chef Floyd Cardoz tried to counter the point but the truth is that one can't have fun anymore on today's polarised world on Twitter and elsewhere. We are all lost souls trapped in a pressure cooker, as the Indian version of the Pink Floyd song would go. 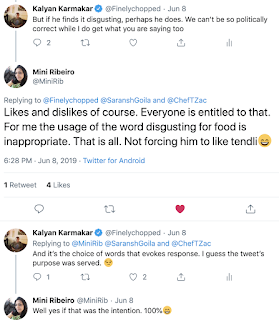 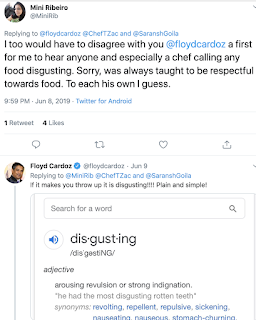 Well, at least Aroor did not use cuss words, words that are synonymous with being 'cool' today. Maybe he does have a hidden soft spot for tendli. Maybe he too was rescued by it once as I was yesterday.

But then a Tweet saying 'here's my ode to tendli' would not really trend would it?

1. A post on what my Little Jack Horner Meals all about


2. Not related to the post, but the missus went to Sri Lanka on a shoot recently and I am tripping on some of the tableware that she has got me from a shop called Paradise Road there. (The mats, the elephant table and the sleeping elephant in the picture below. I need to iron the mats of course) 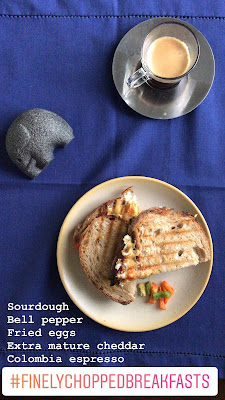 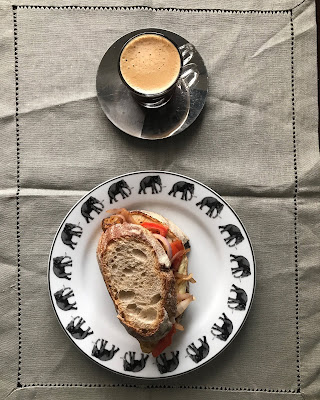 3. Once the my hunger pangs were soothed by the tendli lunch, I headed to the Home Made Cafe at Juhu yesterday where young food writer, Vernika Awal, conducted a lovely workshop on social media called 'Foodgrammin with DR'. DR is the name of her blog, Delectable Reveries. The workshop was full of real life anecdotes and practical tips and I found it quite useful. The message I took out from it is 'focus on telling your own story,' and so here you go, this was the story of my lunch.