A recipe for the Mumbai rains? How about a chicken curry from Kolkata? The joys of murgir jhol bhaat ghoom.


We have seen some heavy rains over the last couple of days in Mumbai and yet it seemed as if it was the heaviest downpour of the entire season when I woke up this morning!

K is travelling on work and the house right now is stocked the way a bachelor's pad would be, which is rather shameful I admit. The kitchen is clean though, for whatever that counts. I even ran the dishwasher when Banu bunked for a day. K runs it usually so that I do not have to bend given my weak lower back.

There were no eggs or bread at home yesterday and I had to call in for a grilled chicken and cheese sandwich from the Indigo Burger Project through Swiggy. Thankfully the valiant folks at both places were working through the rain. The sandwich reached me warm. I popped it in the griller for a bit more heat and char and it turned out to be just the hot and indulgent breakfast that I was craving for. Indigo Burger Project is a delivery only, cheaper brand extension, from Indigo Deli and the food is made by the same chefs and in the same kitchen as the restaurants. I had ordered the 'grandma's chicken burger' a couple of days back. The bun was soft, and unlike those in Burger King or KFC, not crumbly at all. The minced chicken patty, deep fried of course, was the juiciest chicken patty that I have ever had. The fare spelt comfort and was reminiscent of Bombay in the late 90s. Of places such as Oven Fresh at Shivaji Park (before they turned veg) and Churchill in Colaba and Croissants etc if you know what I mean. A time when butter, mayonnaise and processed cheese stood for happiness and when we had not heard of gluten or whole grains, avocado or kale. The good times, as my favourite Bombay food raconteurs, Kunal Vijayakar and Dr Kurush Dalal would say.

There were eggs today, but no bread. I had bought the former yesterday afternoon, not the latter. Thankfully Swiggy was delivering again despite the rains. I called in for a multi-grain sourdough loaf from La Folie (please slice and send, I wrote in the instructions). I then made the most perfectly folded (two egg whites and half a yolk) omelette that I have made till date. With finely chopped capsicum and tomatoes and fried herbs in the mix and extra virgin olive oil (cooked on a low heat) as the base. Do not tell Kunal or Kurush about the abandoned egg yolks please. They would sob if you did.

The trick to folding the omelette, as I have realised after burning and botching many, is to make sure that the entire surface of the pan is well oiled and then to turn off the gas once the beaten egg begins to take shape after you pour in onto the pan. The residual heat will take care of the rest. And a bit of TLC. Tender love and care. You can't hurry an omelette.

Thanks to the Nespresso machine at home, coffee is no longer a problem. Espresso happens on tap at home unless earlier when I would call in for a cappuccino to start my day with. 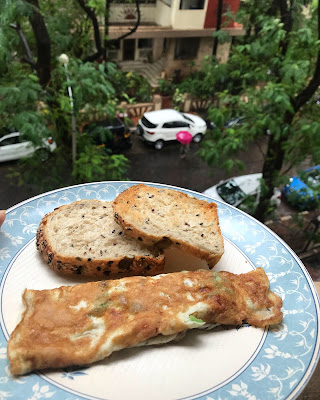 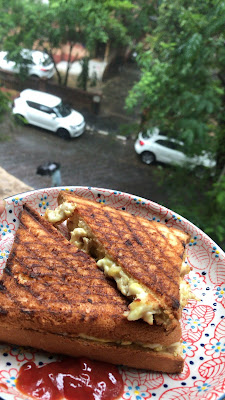 
What to do for lunch, I asked myself once breakfast was done. I then remembered the lessons that I had learnt while growing up in Kolkata and quickly called Jude Cold Storage in Bandra for some chicken drumsticks and wings.

You could not call in for chicken, let alone cuts of your choice, in Bansdroni which where I grew up there in the 80s and 90s! It was then considered to be among the outer reaches of South Calcutta though that has changed now I believe though home delivery is still at a premium.

I remember being sent by mother to the local market on rainy days to shop with a hundred rupee note, when I was considered old enough for it (age of 15 onwards roughly). The one place that would remain open despite the rains would be the chicken seller's stall. With chicken kept huddled under a net in a basket and then in a cage as his business grew over the years. You would go to the murgi-ala (chicken seller) and specify the size of chicken that you wanted.  He would get one out, weight it, cull it in front of you and then give it to you, cut and cleaned in a plastic bag. It was the late 80s and plastic bags were the most exciting things to have happened in retail in Kolkat back then and had begun to replace dried saal leaves bundles and thongas (recycled newspaper bags).


The murg-iala still operates at the Bansdroni market and I say hi to him whenever I go there. The alu-aala (potato seller) would be open too on rainy days and I would buy potatoes (avoid the ones with green patches my mother told me) and onions as well before I headed home. I have no idea about whether the vegetable and fish guys would operate on such days.

Would they not stay open for business on rainy days? Or did they not come into my consideration set because I liked neither fish nor vegetables? Or was I sent out with instructions to buy only chicken, potatoes and onions as my mother did not trust (rightly so in this case) my fish and veggie buying skills? It will remain a mystery. Unless my mother decides to blog about it too!

The fruits of my shopping would be a murgir jhol bhaat lunch. Chicken curry and rice. With potatoes and offal of course, to make it last.

My mother would cook if the cook could not make it to work. My mother cannot make rotis just as I cannot and on such rainy days, bread would not be available. Hence rice it would be.

She would make khichuri too when it rained but no, we would not eat khichuri on every rainy day. How boring would that be?

Bring out the curry


I recreated the memory of my Bansdroni rainy day lunches, from more than two decades back, in Bandra today.

I decided to go the whole hog for the lunch and used Gobindobhog rice (which Kolkata based blogger and friend Anindya Basu had given me) instead of Basmati or red rice, and topped it with a newly opened pack of Jharna ghee from Kolkata before eating. I even cooked the chicken with shorsher tel (mustard oil), the 'Bengali' way, though my mother used shaada tel (vegetable oil) while I was growing up and when I could not stand the smell of mustard oil.

While rummaging through the kitchen cupboards today, I found an unopened Ikea Chinese wok and decided to use that after rinsing it. I think a friend from Singapore had bought it on my behalf from the Ikea there years back. Funnily enough, the handle began to emit smoke once I put the wok on the hob and then turned white. Seemed ok after that. I hope I was not supposed to season it.

I am not sure if the use of Gobindobhog, mustard oil and Jharna ghee would win me the immunity pin thoug. After all I did use cumin powder, tomatoes and as a garnish, coriander leaves, which might still make some of my fellow Bengalis huff and puff and say, 'fiddlesticks, this is not authentic!'

Well, these ingredients are used by my mom and my didu (her mom in their kitchens) and frankly every chicken curry recipe that I would look up when I began cooking in the early 2000s had these. Recipes as they say, differ from kitchen to kitchen and often from occasion to occasion. Today I wanted a light curry and went low on the chilli powder.

A quick nap (ghoom) was my dessert of choice after this.

I have shared my murgir jhol recipe in the past but I am sharing today's too below. It serves two, or in the case, one over two meals. 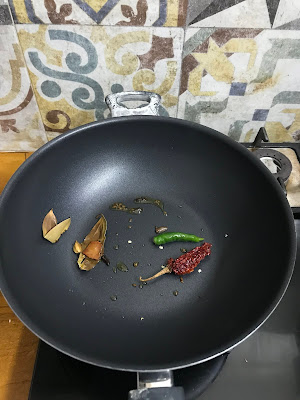 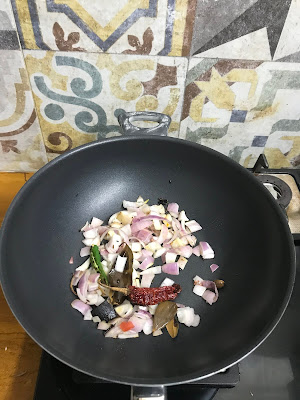 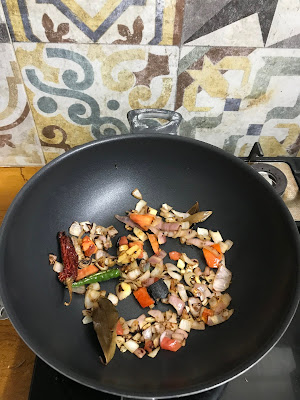 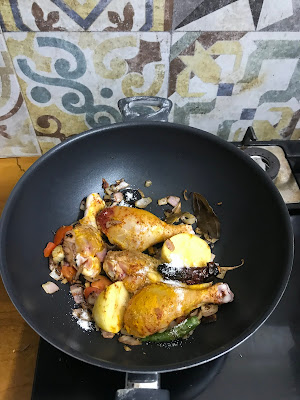 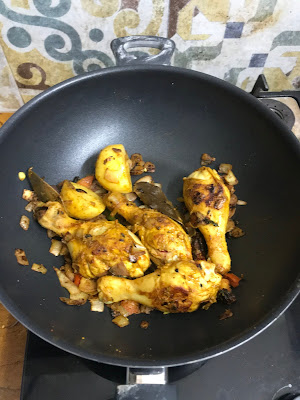 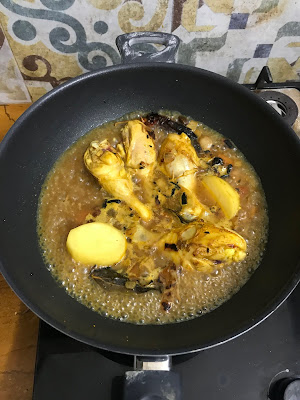 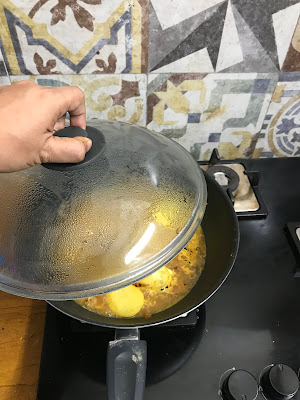 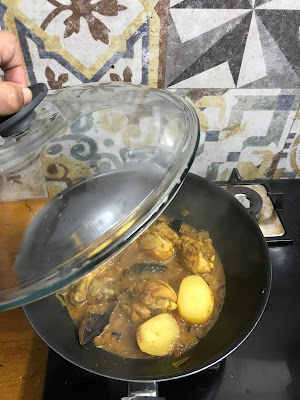 Tip: If shooting for Instagram, remember the more complex your plating, the more likely you will have to reheat your food!