"I love Bengali food and would love to have the recipe of doi begun and dhokar dalna," said Surabhi Sehgal. Surabhi is a food stylist who has recently moved back to India, specifically Pune, from Dubai where she was till recently. I met her at a session on food blogging at the Grand Sheraton, Pune. It was organised by Jayesh Paranjape of Western Routes and Dushyant Bhatia of Eating Culture who had invited me to talk on my experience as a food blogger. In the Q&A session that followed, Surabhi spoke about how she focuses on making day to day Indian food look soulful through her work.

Her request for Bengali recipes was part of an Instagram conversation that we later had. I told her that I have a doi begun recipe on the blog but had never made dhokar dalna myself.  Dhokar dalna is a dish which is often served to vegetarians on festive occasions in Kolkata. My mother used to make the latter in Kolkata when I was in school. She would make the dhoka, a ground dal based dumpling, using ready mixes from the local market.

Our Instagram conversation came back to me when our cook, Banu, came to work today. Which explains why I got her to make a doi shorshe begun for lunch.


What is doi shorshe begun? It is a dish made with aubergines fried in mustard oil and finished in a yogurt and crushed mustard seed based paste. I have no idea if mine is an authentic recipe. My mother, or grandmother, had never made this at home as far as I remember.

Banu could follow the instructions easily (I gave her the spices) and what came out of our kitchen today tasted pretty good. If that entices you, then here is the recipe.

I had this with red rice. What the Keralites call matta rice. Mota chaaler chaat (chubby rice) as we would say in Bengal. To which I drizzled a bit of Jharna ghee on top to make our kitchen smell like my grandmother's in Kolkata.

I added a chholar dal to the tableaux. A dish I had learnt to love thanks to my grandmom. Banu has picked this recipe well from me. My family is Bangal (from east Bengal) and hence our chholar dal (Bengal gram), unlike what you get in Bengali restaurants, is not sweet. The latter version is the Mohun Bagan or Ghoti way. The west Bengal way.

To make our drawing room n Bandra in Mumbai smell like my mother's in Bansdroni in Kolkata, I added a slice of gondhoraj lebu to the plate. This lime, typical of Bengal, was brought by our friend Shaswati, who had gone home to visit her mother recently and gifted a couple to us once she was back. She had even made and sent us a lovely home cooked meal which included a simple mooshoorir dal to which she had added Gondhoraj lebu leaves which added a bewitching aroma and flavour to the dish.

I mentioned this when I posted the picture in my Instagram stories. Srijani, a fellow lover of the slow life as her Instagram bio puts it, replied saying "that's a favourite of mine. I love scooping the dried rims. Tastes good. Sounds gross?"

"That's what the Italians do," I replied. "And anyone with a sense of taste."

The inspiration to make the dish today came from Instagram one could say. As did the approval to post the messy rim pic.

The suggestion to use some of the lovely scarves that we are welcomed with in hotels (ITC Hotels primarily), as an Instagram prop, came from the missus yesterday.

Pics from the Pune meet at the Grand Sheraton. In conversation with Dushyant Bhatia, who organised it along with Jayesh Paranjape. 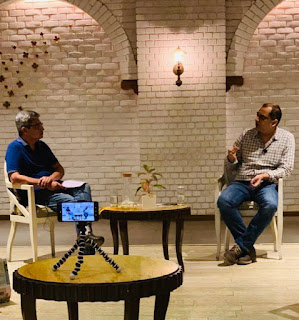 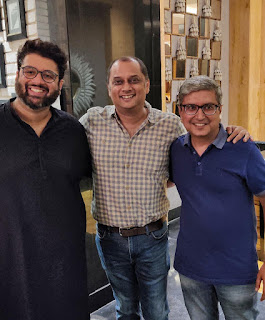