You might have often seen me use the term 'parar pujo' when it comes to the Durga Puja and wondered what it is about.

Para means locality in Bengali. The neighbourhood that you call home. Parar pujo refers to the Durga Puja that happens there. Bengalis across the world somehow find one and this post is about how I found mine in Mumbai thanks to my blog.

My parents had their parar pujo in London in the 70s. That is where Bengalis from across the island would congregate during the weekend to celebrate the pujas. My first Durga Puja experience was there and we have pictures of me in a pram placed by the idol of the Goddess in our family albums.

I doubt if they had found a parar pujo in Iran for the year that we lived there before we left after the Islamic Revolution. Our first parar pujo after we moved to India and to Kolkata was in Dhakuria. I was 8 then and fascinated by everything that was so new to me. My dad, was more gregarious and outgoing than I am, and was the live-wire of the puja from what I remember. He passed on a couple of years later. My mother then brought up my younger brother and me at an apartment that she had bought at Bansdroni in south Kolkata. With my maternal grandparents and her siblings standing firmly by her.

We had moved in to the complex, Debjan Apt, when it was new and within a year the residents started a Durga Pujo after first testing the waters with the Saraswati pujo. My building pujo became my parar pujo and I must have spent close to 20 years with that pujo. I grew up there with a set of friends. One of whom I met at Bandra yesterday. We transitioned from our half pant years to the Star Trek ones to the star crossed ones over many Durga Pujas together. In the process making new friends and crossing new landmarks and the Bengali rites of passage. From taking part in the cultural programme and then being allowed to help with bhog bitoron (distributing food), from when giving the pushpanjali was the most important thing in our lives to our first crushes and then existential questions about what we would do with our lives. Then, as Kolkata stories from the 80s usually end, most of us moved out of the city to work.

I did go back to our building during the pujo occasionally but it does not feel the same to be honest.

My early Durga Pujas in Mumbai felt lonely as I missed being at home. I tried to go back whenever I could during the pujas. Then I made new friends in the city. Married one of them. I would go with them to the Bandra Durga Pujo in Mumbai. The one that happens beside the Patwardhan Park at Linking Road and near the Croma and KFC outlets (which popped up well after I did in Mumbai).

It felt good but something was missing. Then things came alive when I wrote a blog post about the pujo and one of the organisers, Sam, wrote to me wishing and welcoming me. I met them the next time and was welcomed home immediately.

Since then, I am always greeted with smiles when I walk in to the Bandra Puja. I am cocooned by warm and familiar faces when here. Asking me how I am. To me, these are the biggest manifestations of Ma Durga's blessings.

If it's bhog time, I roll up my sleeves and try to help. Then eat at the end with the volunteers. Just as I would do in Debjan in Kolkata.

In the evenings, I come back and hang around with my friends who might have dropped in. Indulging in adda over chop, cutlet, cha, overpriced bites of precious nostalgia. We watch the dhunochi naach. See what's happening in the cultural evenings. Makes plans for what we will do next. Just as we would do in Debjan in Kolkata.

Oh yes, in between all of this, I try to give anjali when I can. And when I step in to the pandal, I bow my head, clasp my hands and say a prayer of thanks to the Goddess for helping me find my parar pujo in the city I now call home. Just as countless Bengalis have. As have you, I sincerely hope.

Finely Chopped turns 12 today and it's all thanks to you


This post was going to be about defining what a parar pujo is all about and I am sure by now you would have got an answer to that.

Then the customary whatsapp from my friend and former colleague, Kashi, came in today. Reminding me that it is my blog's birthday today. The Finely Chopped has turned 12 today.

Nothing happens by coincidence they say. It is my blog that introduced me to Sam and the others at the Bandra Durga Pujo and which started the journey of it becoming my parar pujo.

If there could be a post expressing my gratitude for the life I have had thanks to blog, then there could not be a better one.

Big thanks to all of you for reading and for supporting me. To K, for naming and starting the blog and for waiting patiently as I clicked pictures of our food for it. And to my blog, for giving my mother a second lease of life as that inspired her to start her own blog.

Happy Nobomi folks and here's a video that I shot at the Bandra Durga Pujo yesterday to explain what a parar Durga Pujo is all about:

Post on when Debjan Pujo turned 25
Bandra Durga Puja and the festive spirit
My mother, Rekha Karmakar, on the London Durga Pujas of the 70s

Some pictures of catching up with friends, old and new at the Bandra Pujo yesterday on Ashtami 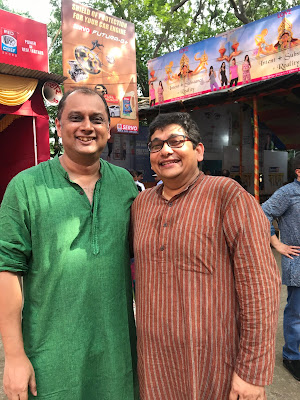 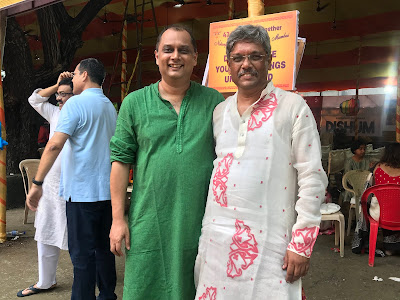 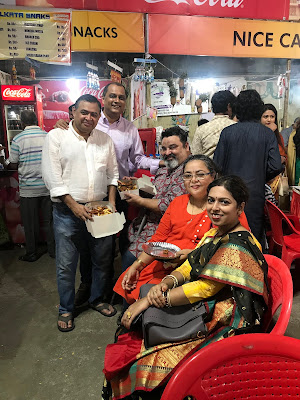 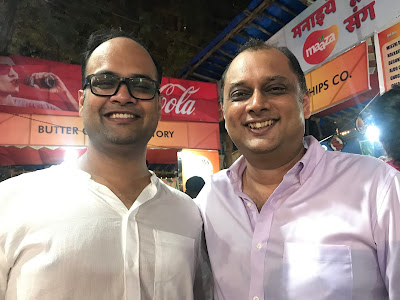 And then there was Doshomi, the day of the pujos and the last bhog before bishorjon. Aashchhe bochhor abar hobe. Shubho bijoya and Happy Dussehra 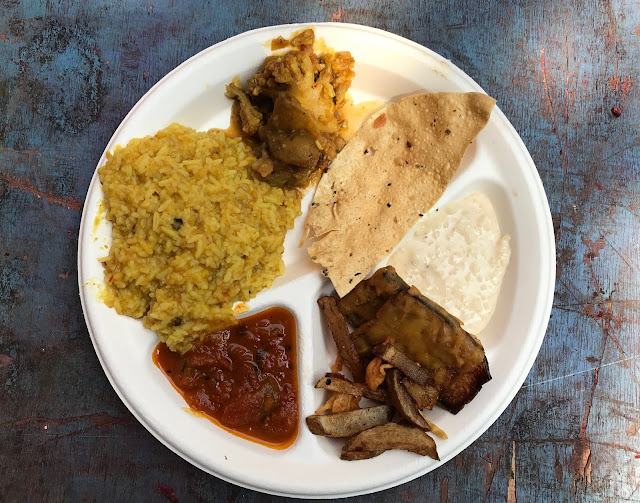 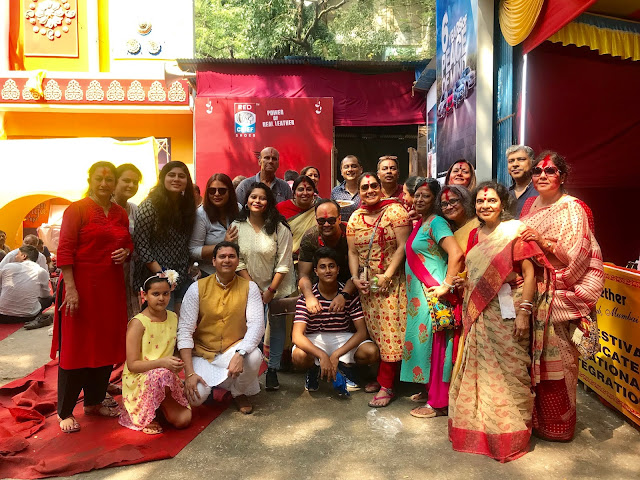 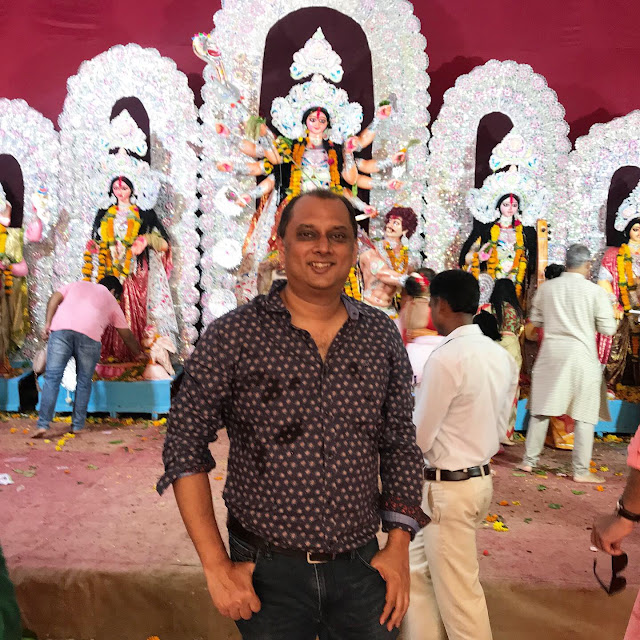 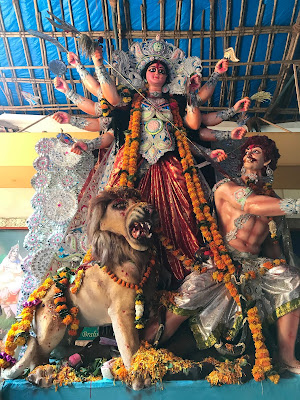 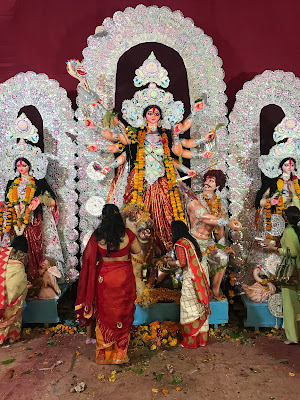 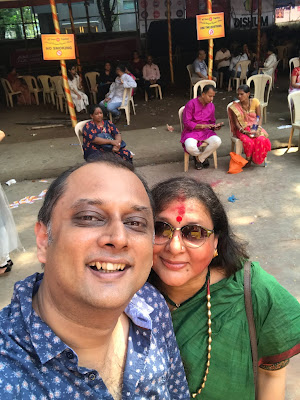 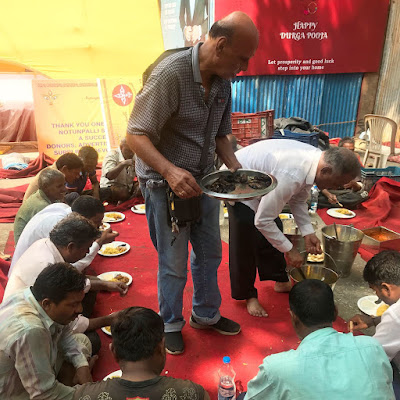 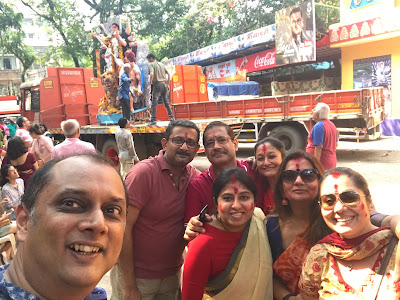