It is the start of the week today and let me tell you about a new culinary experience that I had yesterday. This was at the ‘Dhundur Maas Winter Festival’ at Aaswad Upahar and Mithai Grah, the vegetarian Maharashtrian restaurant at Dadar in central Mumbai. This is the third year since which they have been hosting this festival. It was the first time that I attended it even though I am regular at the restaurant. There is a reason why I had not gone for the Dhundur Maas festival earlier. One that I am a bit embarrassed about, but more on that later.

I learnt from my friend Suryakant Shrikant Sarjoshi, the second generation of the owner of Aaswad, that dhundur maas refers to the winter month of poush. This is a time when one’s skin becomes dry and one’s body needs warmth. To address this, said his wife Smita Sarjoshi, traditional wisdom  recommended the use of certain locally available seasonal ingredients in one’s diet. A number of dishes were thereby created to convert these ingredients into tasty dishes by the Maharashtrian matrons of yore. These had won over even the most stubborn of diners. There is a reference to these in ancient scriptures such as the vedas and purans says Smita Sarjoshi. With increasing modernisation and urbanisation, a lot of this native wisdom has unfortunately been lost and the awareness of such dishes in cities like Mumbai has reduced over time. Smita and her mother in law, Mangala Sarjoshi, have tried to bring back these dishes in the Dhundur Maas menu at Aaswad. 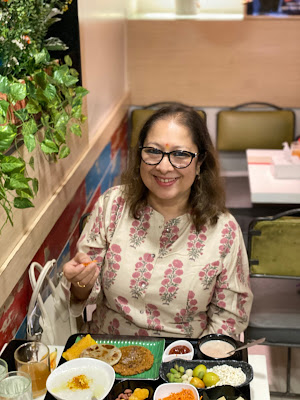 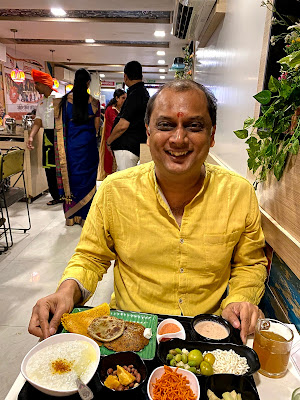 I went to the fest yesterday with my friend Dr Manisha Talim who runs an Instagram page called Sugarsnap Mumbai where she combines her love for food and her professional expertise as a diabetologist to help diabetics eat more joyfully and healthily. She is also a Maharashtrian food evangelist and is the one who had first introduced me to the Sarjoshis of Aaswad among many other Maharashtrian food entrepreneurs.

I walked in at 9.15 am yesterday and saw that the place was packed and the atmosphere most festive. I mean this rather literally. There were musicians playing Maharashtrian music at the entrance. Young priests reciting shlokas at the entrance and ladies welcoming one with tikkas. It was almost as if one had stepped into a wedding.

The Sarjoshis were out in full force. Suryakant and Smita were there going from table to table and ensuring that their guest were at ease. Their daughter, Manasi, who teaches French in the suburbs, was there to welcome us and explain what was happening. Towards the end of the morning, the venerable and ever smiling Mr Shrikant Ganesh Sarjoshi, Suryakant’s father, walked in. He had founded Aaswad in 1986 and the eatery has grown remarkably since those early days.

We were welcomed with warm water and honey followed by the Dhundur Maas thali. My favourites were the deep-fried version of the thali peeth (traditionally a toasted multigrain flat bread made on a tava at homes but deep frying is easier at restaurants it seems), made in this case with jowar and bajri millets and sesame seeds, which was served with unsalted white butter. There was the amboli too. A Maharashtrian rice flower based dosa like dish. The regular amboli at Aaswad is white in colour. This was yellow. “We add turmeric to boost immunity as it is winter,” explained Suryakant.

Suryakant had earlier once told me about a breakfast dish called satori and I got to taste it yesterday. A lip-smacking pancake stuffed with jaggery, grated coconut and sesame seeds. The coconut possibly a result of the fact that most of the food served had its origins in the Konkan belt as Manasi explained. Which is also where the Sarjoshis hail from.

There were til (sesame) ladus, peanuts, green chickpeas (harbara), Indian plums (baed/ narkol kul in Bengali) jaggery, kurmura (muri in Bengali/ puffed rice), poha crisp noodles (sev) and fresh sugarcane to munch on. Ghee poured liberally on all the dishes. Something that would make dietician Rujuta Diwekar very happy. Not that I am complaining. I love ghee. In moderation.

There was a hot sticky rice dish too. The Maharashtrian equivalent of a congee which I had not heard of, even though I was aware of the Japanese one and have had it too before. I guess that this would sum up the case for many of us.  A pity isn't it that we know more about international dishes often than about what is there in our own backyard?

On the sticky was sprinkled metkut, a spice made with crushed lentil, grains and spices which is said to have medicinal properties. A touch of salt would have helped to liven up the dish I feel but the overall effect was warm and soothing.

Offering a tantalising finish was a kheer/ milk pudding made with a local version of dried dates called kharikh. The cost of this meal is Rs 280 this year and it is available only on Sundays (till 26 January 2020 this year) and up to 10 am. You would do well to book in advance as the place is absolutely packed during the event. Suryakant tells me that the response from the first year itself has been overwhelming with folks coming in from far off places to experience the festival.

Wake up and smell the metkut

Now let me tell you why I made it the Dhundur Maas festival at Aaswad only in its third year and not much earlier.

In the first two years years, the breakfast was available up to 9 am. Smita explained the significance of the timing to me. Turns out that the sun god is worshipped during winter and this happens early in the morning which makes the timing significant of the breakfast significant. You can't keep the sun God hungry can you?

The problem is that I am not an early riser and therefore the idea of attending the festival did not work for me. A few things have changes since then. To start with, the festival is now on till 10am on Sundays. More importantly I have learnt to appreciate the importance of having a higher proportion of plant based dishes and ancient grains in one’s daily diet and hence decided to overcome my sense of sloth and go for this and I am so glad I did so.

I saw more customers queueing up yesterday as I left. The restaurant had opened for their regular business by then explained Suryakant. That’s when it struck me how big a labour of love this was for the entire team. To open a restaurant, which is open all day, three hours earlier in the morning is no joke. The tables were packed right from the start which meant that there was no time to take it easy. Yet the entire staff was there. Familiar faces going from table to table with broad smiles and trays of food. As were the Sarjoshis. The fact that a long day lay ahead did not seem to cross their mind. Or the fact that they could have taken it easy on Sunday. They had a story to tell and were clearly folks on a mission. A most noble and delicious one.

Which made me feel a bit embarrassed about not waking up in time and coming for this much earlier, but better late than never as my father would say.

I went home armed with a resolve to emulate a bit of the spirit and passion of the folks at Aaswad when it comes to doing my bit for strengthening and spreading the story of Indian food and I do hope that you find this story inspiring too.

I want to leave you with a piece of good news before I sign off. The second season of the Times Kitchen Tales started and you can catch the column every Sunday in the Times Life supplement which comes with the Sunday Times of India. Yesterday’s issue was about respect for food and the Dhundur Maas meal at Aaswad was an example of how to apply this our daily lives in my opinion.

Here's a video that we shot at Aaswad yesterday. Please do show some love and subscribe to my channel on YouTube, Finely Chopped TV by Kalyan Karmakar.