What a morning it has been!

Baby Loaf came to me at 8.30 am and kept meowing to go out. I tried to talk to him, play with him,  to calm him down. Fed him too. He finally stopped meowing at 9.30 am and I lay down on the bed tired. Then I saw him go below the bed to sleep. 'Good night,' I told him and went off to sleep too. 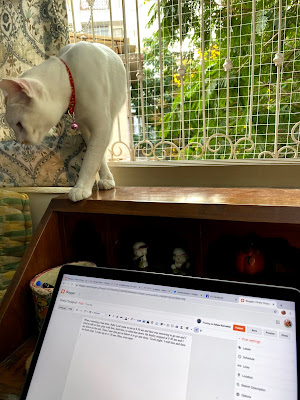 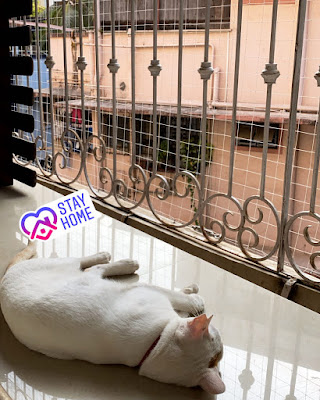 An anda pav-vala (egg & bread seller) came cycling down our lane last evening. I went down and bought eggs and pav from him. We have decided to really restrict our movements during the lockdown in the spirit of #stayhomestaysafe,  which is the need of the hour to help flatten the Covid19 pandemic curve. With eggs at home, we would be sorted we felt.

This morning a vegetable cart guy came to our lane in Bandra and I bought some capsicum, cauliflower, cabbage, peas and ginger from him. There is no reason for us to step out after this for a while, barring going down to drop the trash in the cans in the compound at night. Or to give some refreshments to our security folks.

I took the eggs and pav (as I did with the vegetables today) in a separate bag last evening. Washed the eggs in soap water and put them in the fridge.

"It is from A1," said the pav vala when I asked him about the pav. The aromas of fresh bread emanating from his pav bread did do justice to this legendary Bandra bakery where work starts at 4 am or so every morning.

Bandra is a suburb in Mumbai in case you did not know. It is called the 'queen of the suburbs.' It has been my home for the twenty years that I have been a Mumbaikar so far.


To sanitise the pav this morning I toasted it, Mumbai street food style, in the kadhai (wok) in which I had first made a fried egg which I had seasoned with podi from Kochi and pink salt from Kathmandu. The pav was nice, hot and toasty and went perfectly with the egg. The latter was the last of the free range ones that we had bought from Nature's Basket before the lockdown. This explained its nice and orange yolk.

One bite of the pav and I wondered, 'is there any bread that is as good as the humble naram/ ladi pav of Mumbai?' A remnant of the city's Portuguese legacy.

"The pound ruti of Kolkata," chimed in my friend Kaniska from Kolkata in answer to this question on Facebook. Both are the fruits of the same Portuguese legacy.

K took a bite of the hot pav and said, "why did we not name Baby Loaf naram pav?"

"That can be his Marathi name," I replied. I call him 'Babu Shona,' in Bengali. 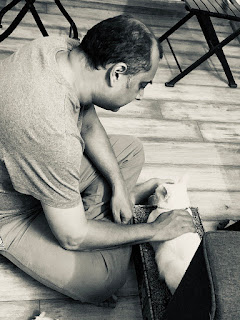 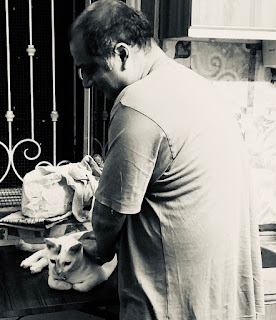 Baby Loaf pics are from 29th March 2020 taken by K. Check the 'kneading the dough' one,

Later, when Baby Loaf got antsy again in the afternoon , I sat beside him and chanted and then drummed on the floor with my fingers in rhythm and that calmed him down and he went off to sleep after that. He has been very restless for the last couple of days. This is what I wrote yesterday morning on Instagram before we both went back to sleep. 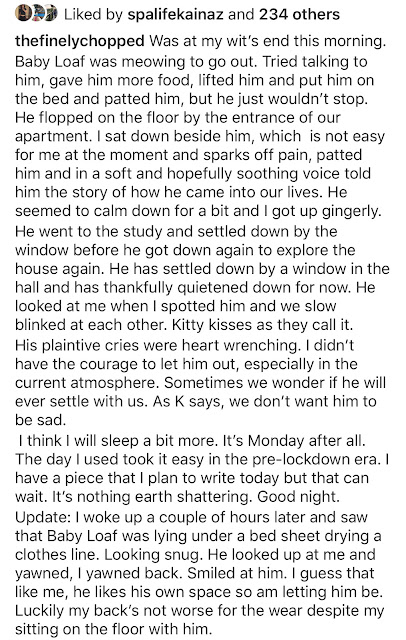 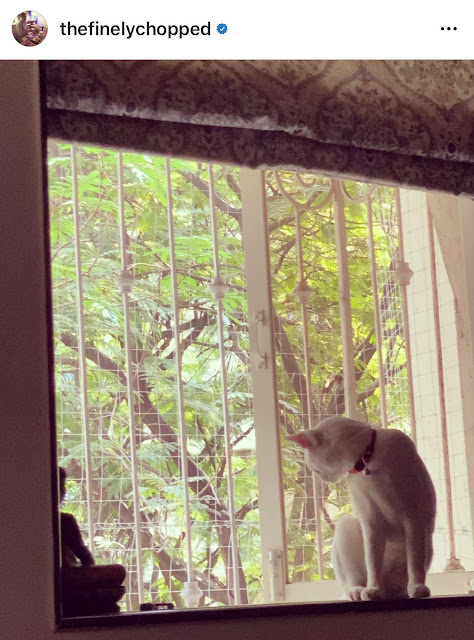 Baby Loaf was again a bit antsy when he woke up at midnight and kept looking at me and meowed. It seemed as if he was trying to desperately tell me something.

I finally gave in and opened the door and kept an eye on him. He walked up and down our staircase and went to his old terrace too. Then came back by himself. Stepped out again. Then finally came back and flopped on the floor by the passage at the entrance of our apartment. I sat and patted him even though my back was hurting like hell. Anything for him.  K did her best to engage him as well and patted him and played with him.

This little outing worked. Baby Loaf has been a lot calmer since then. I need to make him a fully indoor cat in the long run as per the vet's advice. That is what is safe for him. 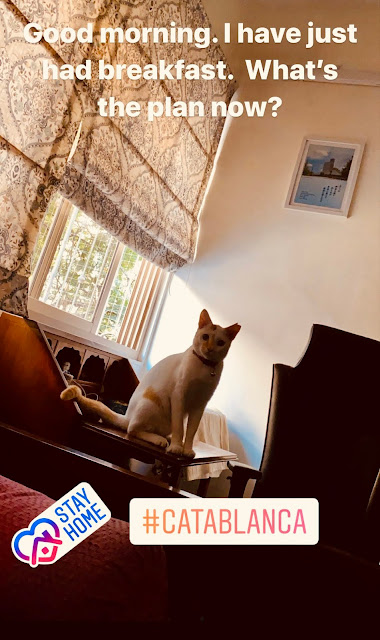 I woke up this morning at around 7 to see Baby Loaf looking at me. A look which I recognised as one which said,"what's the plan for the day? And I am hungry!!!!!"

I stumbled out of the bed, put his breakfast out (he had eaten once at midnight and again around 3 am before that) and went back to sleep. Woke up late again and then went to make our breakfast. Baby Loaf was snoozing ON the hall window AC. 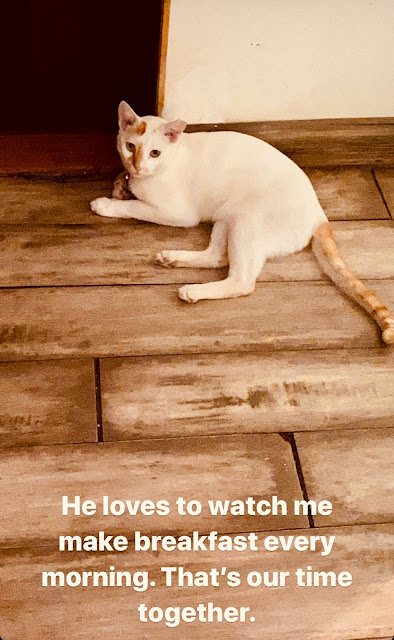 As I started my work in the kitchen, I could hear Baby Loaf come towards me thanks to the bell of his collar. While he sleeps through most of the day, morning is our time together. He normally troops in to the kitchen when I make breakfast. As if to see what I am up to and, frankly, this is the most important life's lesson that I can give him. How to make a cheerful breakfast.

Today I taught him how to refresh a two day old pav by slicing them and then putting them in the pan in which you had just made a cheese, tomato and onion omelette. Mumbai street food style.

Morning lessons done, K and I sat to eat. She took a pav. Buttered as per her request. I cut her a bit of an omelette even though she said she would just have the pav.

As we began eating, on cue Baby Loaf went to his food plate and had a nibble of his kibble. 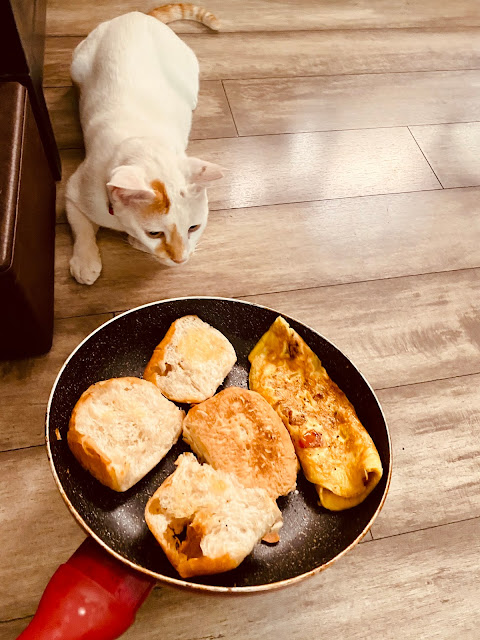 As I was telling K, thank God that Baby Loaf moved in with us before the lockdown happened. That helped us get everything in place before that. Plus this would not have been a safe time for him to have been in the open and unclaimed.

Baby Loaf has been such a wonderful addition to our house, family and lives. He makes the lockdown feel like a cakewalk.

Rather than wanting to go out, I want to be with him all the time now. I love him so much. Though I must remind myself not to smother him too much as a video that I watched last night said that cats get overwhelmed by that.


Funnily enough, I can never think of Baby Loaf as a rescue cat though he is technically one. He was our neighbour in a sense and part of our lives before we moved in after all. If you want to know how this non cat person ended up being Baby Loaf's doting dad, then you might want to read this post. And if you have a pet, I would love to hear if you feel that this has made a difference to how you have handled the lockdown.