The other day I saw my friend and one of the earliest food bloggers in India (her blog predates mine), Nandita Iyer, start a Covid-19 journal. A record of how she spent this period of lockdown. In the past few days, I saw more people starting such journals across the world. There is even a Covid-19 Journal site, as I saw on Twitter earlier this evening. I thought that starting a journal was a fabulous idea.

This is what blogs used to be once upon a time. A dairy, a journal.

In my case, Instagram has taken over that role. I use the blog for periodic long copy articles instead. Mood pieces as Haimanti Mukherjee, my editor at Times of India, calls my Times Kitchen Tales articles. However, it is a lot easier to track things on a blog than on Instagram over time and hence a journal on the blog makes a lot more sense.

I had already written here about the Instagram and Facebook lives that I have been doing these days to keep the community of Finely Chopped readers connected during these anxiety ridden times. My attempt to rally our collective spirits. You could call that my first Covid-19 journal entry.

Today let me write about how the food side of our life looks after the 21 day lockdown in India, which was announced by the Prime Minister in an effort to flatten the curve (stop the spread) of the Covid-19/ Corona virus pandemic, started.

We split forces and went out the day after the announcement, wearing masks where there were crowds. True to the promise of the chief minister, shops were open around Pali Market in Bandra. Some were grocery stores, which regulated the number of people going in at a time, and ensured that people waiting maintained a safe distance from each other while waiting. We bumped into three four friends and acquaintances while out and exchanged our hellos while we all maintained physical distance. 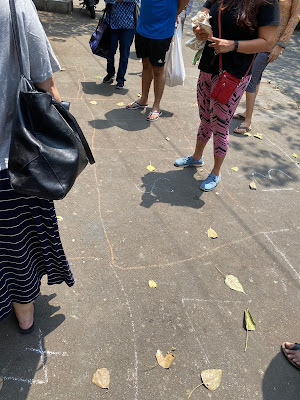 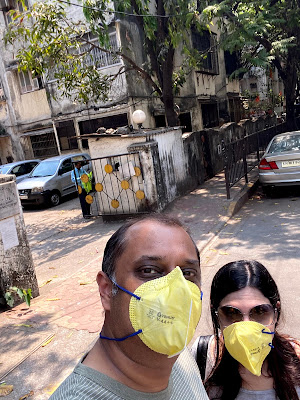 The elderly owner of Vijay Stores at Pali market even handed a bottle of water each to those of us waiting in the sun. A lovely gesture I thought. The police kept a paternal eye and ensured that the market road was not crowded. Vegetable, fruits, milk, eggs, bread and meats were available too. I am not sure of the prices as we just needed a few things from the grocers which were sold on MRP. We have not gone out today.


The  lockdown necessitated need for frugality has impacted our meal patterns too. Our meals yesterday were of the sort that would have made both our mothers proud. Leftovers in the fridge were used productively. Albeit with a new lease of life. The result was simple, one dish meals.
In the morning I saw that there was one paratha which was leftover in the fridge from the ones Banu had made for us when she last came to work. I made an egg roll with it for breakfast even though there was fresh bread in the fridge. That could wait for another day. I added a bit more of the sliced and sauteed onion and capsicum than I normally do. This was to add bulk as I normally have two at a go at home. Our parathas and rotis are smaller and lighter than the maida ones of the roll shops of Kolkata after all.
I later asked a Soka Buddhist friend of mine who stays by herself about how she was coping. She told me that she doesn’t know hot to cook but was teaching herself to now.
‘We would have grown up as a nation at the end of this,’ I told her. Then realised that maybe it’s time that I learnt how to make rotis myself!!!

I made a one dish meal for lunch yestrday. Hakka noodles with the chicken that Banu had boiled and shredded and kept in the fridge. We gave some to our neighbours, the Badamis, downstairs. A very small return gift in lieu of the amazing butter cookies that their daughter, Gia, had baked and given to us a couple of nights back and the lip-smacking Goan prawn curry rice that Erika (Gia's mom) most kindly gave us the night before.

There was some of the delectable gravy of the Erika's curry leftover yesterday. Rice too.

At night I shallow fried a couple of slices of surmai in coconut oil, added the remaining prawn curry gravy to it. I added a bit of the coconut milk in the fridge, which was leftover from the pack that had been opened to make a fish curry a couple of days back. Added some water and salt, cooked it. It made for a delicious dinner with the leftover rice.

We ordered a ragi dosa from Madras Dairies, which was still open, through Swiggy, for my breakfast today. A mushroom and four cheese quiche from Deli By the Bay for us in the evening. The delivery person left it with the watchman and left to avoid contact risk. We owe so much to those working at such times to keep our lives going. At risk to their own. Whether to get outside food in is your call. Take all precautions is what I say and, as my friend Soumik Sen says, perhaps we can encourage those staying open by ordering?

I changed the utensils and heated the food to sanitise it first.

Lunch today had to be a simple affair as my back was hurting. Kainaz made herself a microwave masoori dal. I made a khichuri in the pressure cooker. To keep it simple, I did not dry roast the moong dal first unlike what we Bengalis generally do.

The khichuri turned out well and I even did stories on Instagram of this and put them in my highlights. As I did with the noodles and rolls too for folks to try.

I had planned to make begun bhaaja with the khichuri. Then, keeping the need for frugality in mind, I put the brinjal which I had take out for the begun bhaaja back in the fridge. Did I really need it, I asked myself. The answer was no.

I had the khichuri with the green chilli and mango pickles from Ram Bandhu, Nashik, instead. That was good enough. A dollop of Jharna ghee on top added to the sense of tripti and ullash as we say in Bengali. Joy and ecstasy. #chetepute or lick your plate clean followed. 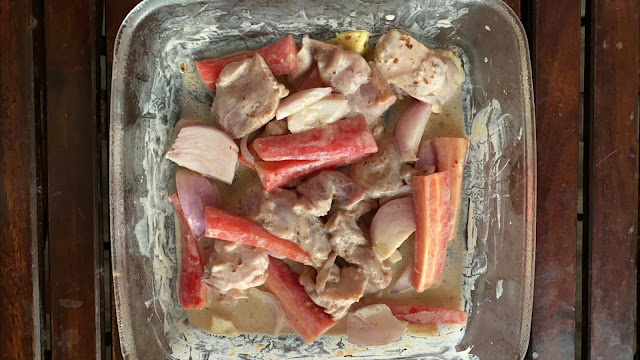 For dinner tonight , I marinated some mutton (goat) which was left in the fridge, sliced potatoes, carrots and onions too, with whatever I found in the fridge. This included the last of the coconut milk from the opened pack in the fridge. Balsamic vinegar, extra virgin olive oil, butter, truffle oil. Zatar, salt, white pepper, red chilli flakes. I added the potatoes just before the tray went into the oven as they could get black if peeled and kept out for long. They were the best part of the dish and provided the main bulk as the quantity of mutton was very less. 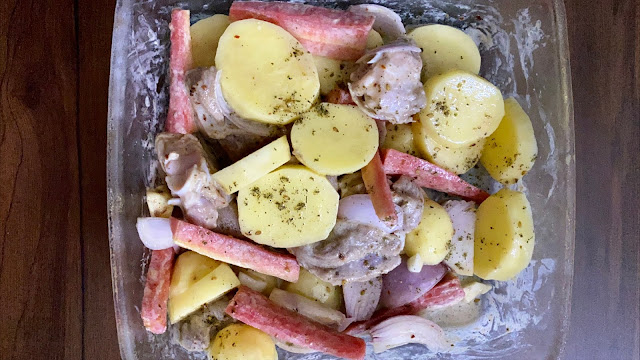 I slow cooked it for 2 hours and 20 min in the oven. The first 80 min at 200 C. Wrapped in a foil. The remaining 60 min at 150 C, with the foil removed with a few drops of extra virgin olive oil, balsamic and truffle oil added at the finish.

I took out and thawed the last of the sourdough from Suzette, which was in the deep fridge. Kept it in the oven while the meat rested.

That was the story of tonight's dinner which was a rather delicious though low effort one.

There were two things that struck me about the meals of the past two days.

First, the fact that I utilised everything that was there at home rather than wasting it. Rather creatively at that, if I may say so.

Secondly, the fact that I asked myself while planning the dinners whether each element that I thought of was really required. The begun bhaaja with the khichudi is an example of one which was not and hence not added. I plan to use the brinjal to make a bhaaji another day.


I feel that this need for frugality going to change the way we live and we will be able to cut out a lot that is not essential from our lives. Making mother earth happy in the process.

PS: I have used the word 'frugality' in the relative sense of the word. Not the Gandhian one.