It was the best of times, it was the worst of times. It was also Jamshedi Navroze!

It has been a strange Navroze for us this year.

Navroze is an important festival for the Parsis and as you know I am a Bengali married to a Parsi. My in laws and us have always got together and met up on Navroze. We lost my father in law on the way but mom in law and her brother and her sister have always been there to bless and wish us on the occasion. My family in Mumbai. I have written about many such occasions over the years on the blog.

This year has been different. With the Covid virus pandemic hitting India and the need for social distancing, meeting people or going out to celebrate was out out of the question. In fact my mother was supposed to visit us from Kolkata but this put paid to her plans.

My wife's mama and masi, being senior citizens decided it was best if they stayed home instead of coming over for Navroze. My mom in law's plan was to cab it down on Saturday (21st March, Navroze) as she she spends the weekend with us in any case.

Wait, when is Navroze?!

Then a spate of messages came in yesterday (Friday) wishing us happy Navroze!

"I thought so," she said looking up from her spate of working from home video calls.

I checked with Rhea Mitra Dalal, the wife of Dr Kurush F Dalal, a fellow Bengali married to a Parsi. The two run Katy's Kitchen from where we had ordered Navroze Bhonu (meal) for mom in law, K and me.

"It starts today this year," she said. "Goes on till tomorrow. The date change could be because it is a leap year"

We hadn't made any arrangements for yesterday and with Mumbai gradually being closed for the Covida virus, going out was of course not an option.

That is when Malu, the fisherwoman who comes to sell fish at our building, rang the bell. We had requested her to get some fish for us and she had got surmai. I bought 4 slices and wryly told K it was my Navroze gift to her. 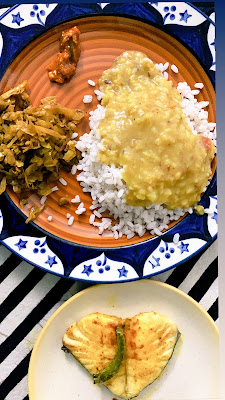 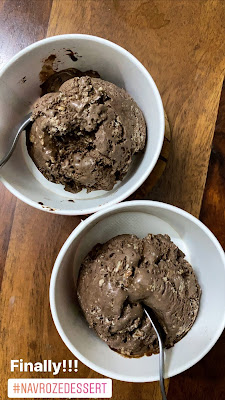 I fried a couple of pieces of surmai at night to have it with moong dal and Bengali styled cabbage and there was red rice for me. Bhaat, daal, maachh bhaaja and badhakopi to me. To the Bawi (Parsi lady) at home, it would be mori dal and tareli maachhi. Tareli machhi and maachh bhaaja are what we call  fried fish in our respective languages (the Parsis in India speak Gujarati and not Farsi). And as the Bard would have said, fried fish by any name is just as sweet.

There was no dessert though and as we were washing up after dinner, I quickly wiggy'd in a couple of Bavarian chocolate scoops from Baskin Robins to surprise her. She got to have it close to 1 am once done with her work calls with the office on overdrive. I know from experience that being occupied is the best antidote to being stuck at home. Remember, I have been in training for this for the last 7 years after I moved into freelance!

I spoke to Kurush this morning to wish him and he told me that Navroze (Nowruj in Iran, Turkey etc and the spring equinox) does get celebrated a day or two early at times though the Parsis here insist on it being only on the 21st of March.

He was right. When I called masi to wish her yesterday and Perin aunty today, they both said Navroze is on the 21st. Perhaps it is a Cuffe Parade thing as that is where they both stay!

It was sad to hear Kurush say that he is shutting operations at Katy's Kitchen from tonight itself for safety. Which means that tomorrow's festive orders which would have paid for a month or so's rent for him, would be cancelled but as he put it, humans first. My heart goes out for all small business owners, especially in the food business. There are so many lives that depend on them but they have to close down in the interest of humanity for now.

I strongly believe that the love and goodwill they have earned by feeding so many, will protect them all and bring them back stronger.

Navroze celebrates the advent of spring (spring equinox) and as the Buddhist monk Nicherin Daishonin had said, 'winter always turns to spring'. This is what we need to remember now and not lose hope.

There was another surprise in store for us this afternoon. In her spate of Whatsapp messages and forwards to us, we had not read my mom in law' message saying that she would not come over today given the government directives to stay inside.

Which meant that her food from Kurush's would reach us, which was not a problem as we would have it, but we felt sad seeing that she would miss it. I called Kurush on a whim and asked if he could send mom in law's share to her house. I would pay for the extra delivery charge of course.

Kurush said that in a normal time he would have, but that there was too much chaos on the road today.

"No worries," I said. "I completely understand."

"Wait!!! Did you say Teddy (as we all call my mom in law) is not coming? She will not get the bhona? Give me her name, number and address."

"I will send it," said the good prof imperiously.

And, for K, a surprise crate (!) full of Pallonji raspberry drinks. A childhood favourite of her's.

And ping came a Whatsapp from my mom in law: "Thank you so much for this lovely gesture. Loss of words to express." Lipstick emojis. Her order was veg cutless, veg pulao dar and kesari ravo.

"It's all Kurush and Rhea," I replied.

Happy Navroze everyone. Stay safe. Stay snug. And may the times for kissi koti soon return. Till then, let's keep the social distancing physical, but not in our hearts.

The last line was inspired by this meme going around which I saw on Kunal Vijayakar's page. Koti means hugs and man do the Parsis know to hug or what?! 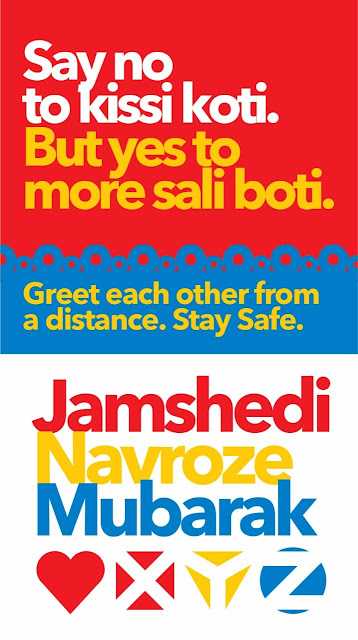 I wanted to share a couple of posts with you.

A brilliant one written by my mother, Rekha Karmakar, on how seniors are dealing with the Corona Virus impact.

A post I had written sometime back on how a change in mindset was crucial for me as I began to get into the rhythm of working from home. Hope you find both useful.


Some of my many posts on Navroze from the past