It has been three days since we have stepped out of the apartment. This is thanks to the Covid19 lockdown in India. The fact that we have whatever we need at home for now helped.

I do go out at night to drop the garbage in the bins kept at the back of our building compound. Wet and dry garbage in separate bags thought. The folks who come to clean the building have stopped coming because of the lockdown. The able and brave staff of the BMC continue to clear the garbage.

This has led to a unique situation at home. What we call, who will hold the cat?

Baby Loaf gets up at around midnight. Stretches. Uses the litter box. Did I tell you that he came to us mysteriously toilet trained?

He has a nibble. Then he goes to the windows and darts from one to another and meows plaintively The cats of the street come out at night and he wants to go and join them. He misses the life he once had and this breaks our hearts. We do not know how to tell him that this is for his good.

K tries to distract him when I head out with the garbage. He would dash out otherwise. He did so once in the past 3 days. Luckily he went only to the floor below and I lifted him and brought him home.

In the morning, he is thankfully all calm and lovey-dovy and greets us by putting his head on K's nap and then nuzzling my feet. Today I patted him for a very long time and he seemed to love it. I know that I did!

We had a very interesting experience last night. Our friend, Sue Cope, got in touch with me from London a few days back. "Let us do a virtual meal together on Friday," she had said. I was not sure what she meant but I played along and agreed. She wanted to use Skype, but I suggested Zoom instead. We logged in 9.45 pm India time. Once K's work calls were over. Showing on my MacBook screen were Sue and her husband Nathan Cope, in what looked like a delightfully bright London afternoon.


We chatted for almost two hours. This was the first time that we were doing something like this and it turned out to be such fun. Catching up on our lives, discussing the elephant in the room of course. The Covid pandemic. That was after all what had made us connect virtually. An attempt to beat the sense of isolation caused by the lockdowns in our respective countries.

In case you are wondering, Baby Loaf did join us at the end of the chat.

Dinner at our end of the chat featured a delectable and light chicken curry made by K. What the Parsi in her would call margi na ras. Murgir jhol in Bengal. "I used only ghee," she said gleefully.

Do not ask me about the recipe. All I know is that tasted wonderful, that she used dahi to marinate the chicken and that she did not use ginger and garlic.

I made red rice to go with it and made enough rice to last for two meals. The idea of making enough for two meals came to me at lunch time. There was a bit of khichuri left in the fridge from what I had made the previous day. I decided to have that with lunch, while K offered to fry the last two slices of surmai from the deep fridge. What the Parsi in her would call tareli machhi. Maach bhaaja in Bengali.

The fish was fried to perfection. Spiced so too. K does not cook very often but when she does, the perfectionist in her takes over.


The quantity of khichuri seemed a bit less for me. It was not meant to last for two meals! Yet it left me satiated at the end. Perhaps I would have eaten more than I needed to, had there been more! This gave me the idea of making enough rice for two occasions in the future to save time and effort in the kitchen. 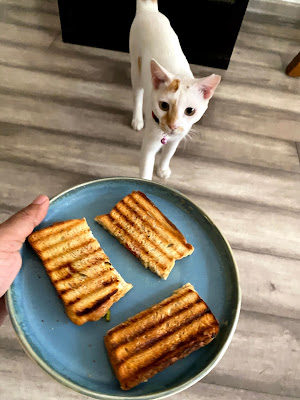 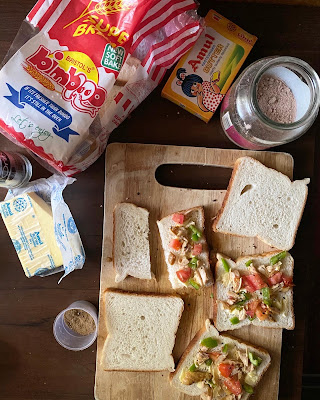 I had kept a few slivers of chicken from the rather large drumsticks (we now have 3 drumsticks left in the fridge) from the curry K had made.

I used this to make sandwiches this morning. Just as my mother had taught me to do with chicken offal from the weekend chicken curry back in the day in Kolkata. I used to make sandwiches with that to take to high school and later college. I used Amul butter this morning, as I used to back then. We had bought butter after a long time for home. The idea being that this might help liven a meal during the lockdown as supplies are tight.

It sure did so with the sandwich today. I grilled it in the griller as the bread is now 4 days old. To add bulk, as I wanted the chicken to stretch for sandwiches for the both of us, I added finely chopped tomatoes and capsicum. For seasoning, there was black pepper, pink Himalayan salt and some chaat masala. Breakfast was ready just in time for us to get into our respective working from work from home concalls and Zoom calls. 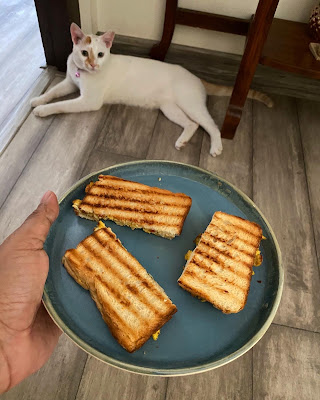 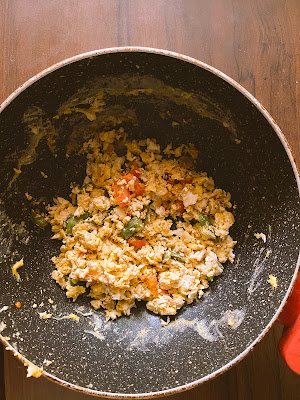 Talking of childhood kitchen hack memories, I used one for breakfast the day before too. Instead of trying to make the perfectly folded omelette or fried eggs that had not burst, which I often do not manage to get right, I just went for an anda bhurjee or a tightly scrambled egg. Didn't matter if the egg broke in this case. You were meant to smash it! it made for a lovely grilled sandwich.

I told Baby Loaf about these hacks when I sat down for breakfast. My attempt to pass on the family quirks, I mean knowledge, to him.

I realised why some folks on twitter in the west preferred using the phrase physical distancing instead of what is in vogue here, social distancing, at the end of the Karmakar Cope virtual meal.

We were physically distanced no doubt, but not so socially or emotionally. The choice of words make all the difference in these trying times.

I want to share the lovely and cheerful picture dedicated to Baby Loaf and me that Aritra Sanyal has drawn. I love it. Thank you Aritra. Most kind of you. This was rather prophetic as I spent most of Sunday morning trying to entertain him! 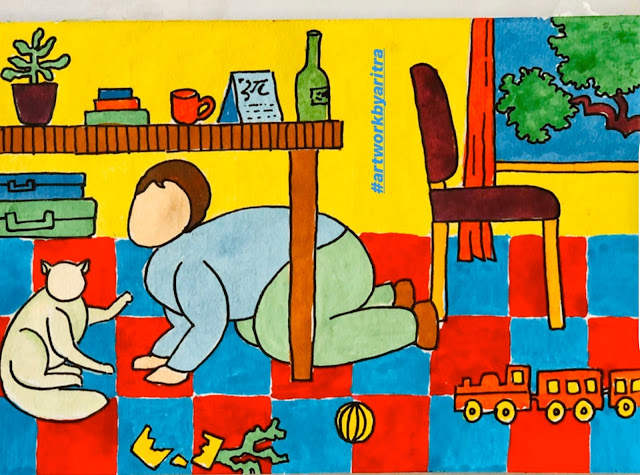