I would often make chicken liver in the early days of our marriage. Primarily because K was (and still is) fond of it. I got to know from her that offal forms a big part of the Parsi diet. Organs, as she would call it. Spare parts, as other Parsis do.

I liked chicken liver too but was used to having a single piece which would come with a whole chicken back in Kolkata. I found having a whole meal with just chicken liver intimidating, but you learn to hold your counsel in the honeymoon period.

We slowly stopped cooking liver at home because of cholesterol worries though of late we have called for it at times as Banu makes a lovely liver masala. I had shown her the recipe but the version she makes is way better than what I had taught her. She is on paid leave from us for the lockdown so that is not on the menu.

I recently decided to call for 250 g of chicken liver from ABBA Broilers in Bandra who do a fairly hassle free delivery of chicken even through the lockdown. It would give some variety I thought specially with us not having access to fish. Plus liver is easy to cook, cooks quickly too.

I made a tava fry as I used to do in the early days of our marriage. A technique that I had learnt then by observing the folks at the Bade Miya cart at Colaba and the Amritsar da Dhaba cart at Colaba.


We had it the liver fry with sourdough wholewheat pav from the Baker's Dozen. The density of which, reminded me of the naan bread of kebab stalls in places such as Bohri Mohalla and Mohammad Ali Road.

That is when it struck me that the holy month of Ramzan or Ramadan had just started. I had read that Mohammad Ali Road would be shut for the first time during Ramzan in 250 years this time. Unfortunate, but necessary because of the need for physical distancing to flatten the Covid curve. A slew of festivals have got affected this time starting with Navroze and including the Bengali new year.

I guess the only way to reconcile to this is to look at this year as the one where we celebrated special festivals at home with our families.

Mohammad Ali Road and the adjacent Bohri Mohalla and their food stalls are where the city congregates in unison during Ramzan and I decided to dedicate the liver masala that I made to that at the India Hotel at Bohri Mohalla, for whose tava fries I have often taken people to  during the Finely Chopped Ramzan Food Walks.

I have so many memories associated with the place. Now waiting to create new ones. 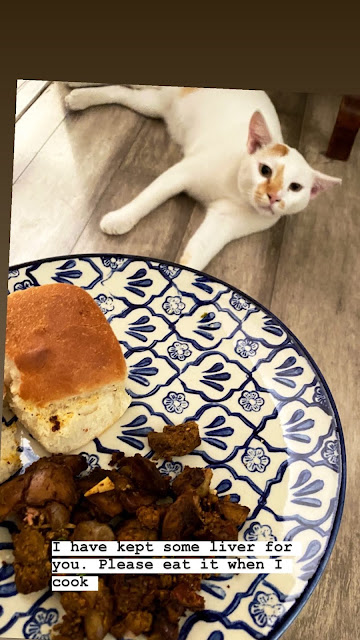 I have got some news for you. I am not sure if you knew this but I had been doing Instagram stories while cooking during the period and saving them in my highlights. I suddenly got the idea to save the stories as videos to share on social media. They are rough cut and self shot but tell the story. Here is the liver masala one. Please do subscribe to my YouTube channel, Finely Chopped TV by Kalyan Karmakar. I have more coming up.