'I did it my way.' The lockdown kadhai chicken recipe that Frank Sinatra would have approved of. Finely Chopped Covid-19 Journal Entry 10


In an earlier post, I had written about how corner stores and street-side vendors remain the mainstay of our provision supplies, almost two weeks into the lockdown. The e-commerce folks have started delivering in parts of Mumbai I am told, but Bandra (W) still remains a delivery dark zone. I wonder why.

I had also written about how very few of the local shops are delivering now unlike before. Solanki Medical has stopped delivering soon after I wrote that they were delivering. We discovered a short while back that Lalu's Vegetables at Pali Market, whom we usually order from, is delivering and we placed an order for this evening today which they delivered in a couple of hours. A number of people have asked me if there is anyone delivering red meat or fresh fish. Unfortunately I have no idea about that.

Yesterday a reader DM'd me in response to a picture of the veg Hakka noodles I had made saying, "We miss the meat included in our dishes Kalyan. Hope things go back to normal soon and the chicken comes back to the Hakka noodles." Amen to that. In an ideal world I would like to make it with bacon.

Our friend Shaswati had given us the number of Abba Broilers at Bandra a few days back and said that they are delivering fresh chicken. I tried them today. They picked up the phone on the first ring. The delivery person came in a jiffy wearing white gloves and a mask. The only thing is that both them and Lalu are not accepting paytm etc so we have to pay cash. I managed it in such a way that the tip and the amount was covered in what I gave and I did not have to take any notes in.

I happened to be at our yard when the Abba delivery happened as I had gone down looking for Baby Loaf. He was restless to go out last night. I kept cuddling him to calm him and K played with him with is toys to distract him.  K and I felt really bad when he wanted to go out last night but we had to be firm. With the Covid-19 lockdown in particular and the strained nerves all around, it is not safe for him to go out. When he does, we only have our prayers and faith to bank on for his protection.

He kept waking us up this morning to let him out and I finally did so. I did not want him to be scarred psychologically. This time he played on staircase for a bit and then went to the parking lot. I saw him playing with another cat there. They were perched under two different cars and kept meowing at each other. Lazzy buggers.

I tried to get him back but he refused. I came up by myself finally and then saw saw him slink in through the door after me. He had come up by himself. I wore my mask as per government directives when I went down so you could call me the masked crusader!

I was a bit cold with him unlike usual to show I was upset and then, to sanitise him, wiped him clean with kitty wipes. He did not protest or claw me  even when I rubbed his belly, which he does not like, and his paws. He knew I was not happy with what he had done. I cleaned him thoroughly, twice over. For the the first time since he moved in. He then went off to sleep on the red cushion that he has made his bed.

He later came to the kitchen when I began to cook and spoke to me silently and licked his lips to show that he was hungry. I fed him. 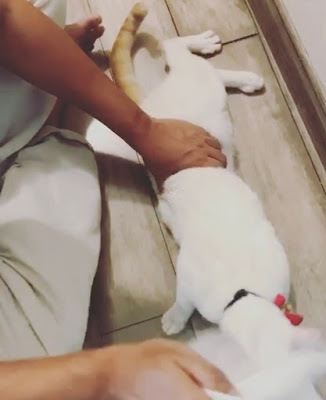 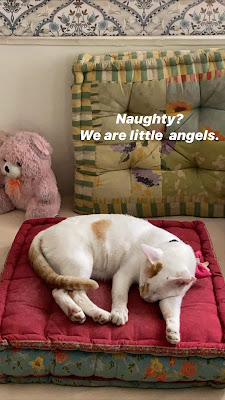 I ordered 6 chicken drumsticks, 500 g chicken wings and 250g chicken wings from Abba today. The drumsticks were massive and I used my cleaver to halve them. I had thought of making a patla murgir jhol (light Bengali chicken curry) with all the drumsticks for multiple meals. I then changed mind and decided to use only half and make kadhai chicken instead.

This is not an 'authentic' kadhai chicken. I am calling it so simply because I made it in a kadhai (wok) and, in the best traditions of a dhaaba kadhai chicken, used capsicum and roughly sliced onions, tomatoes etc. The end result was a rustic dish and we had it the parathas that Banu had made and frozen the last time she could come to work. I thawed those and heated them in a smaller kadhai in ghee.

I did Instagram recipe stories while I cooked and K said she loved the end dish so I am sharing the recipe here for you.  I practised what I had written in my recent article for newbie cooks when i cooked today and finished with a very clean kitchen.

Tip: I had gone for a shower and a shave while it cooked and the dish charred a bit. You cant leave it completely untended or add more water if you need to do so. K said she liked the dish despite this.

Stay home. Stay safe. Wear a mask if you do go out.

That applies to you too Baby Loaf!!!!

Sing the Frank Sinatra song 'I did it my way,' the next time someone bullies you and says 'this is not the way' to cook a dish. Please be fearless and creative when in the kitchen.

Cooking Girl said…
Three cheers to "I did it my way". Much though I love authenticity and reading diverse food blogs, it can get rather off-putting & demotivating when some people get very stringent about the rules and such!
13 April 2020 at 06:07