K and I used to visit my in laws' house once a week every week after we got married and set up house. We would go there after work on the designated day. Have dinner with my in laws (her parents) and then head back home. Usually with some food packed for us. Mummy would cook. Daddy would lay the table and then clear it after dinner. Wiping each table mat meticulously before putting it back on the the table the he had wiped till it sparkled.

The dishes that would feature most often on the menu were tareli machhi (fried fish), margi nu ras (chicken curry); both marinated by dad using Khamkar brand masalas. White chicken (my favourite with cashew paste and grated coconut). Kharo papeta. The last was almost a fixture and packed for us every week.

Dessert would be ice cream. Choco-bars usually. One for each. My ice cream loving father in law would have two. At times my mom in law would make what she called 'strawberry souffle.' It was made with vanilla ice cream and strawberry jelly set together, with not a single strawberry in it. The dish tasted of the 80s and 90s in a rather heartwarming way.

Then my father in law passed away most unfortunately and left us too early. To keep her spirits up, we requested my mom in law to come and spend the weekends with us. Both K and I were working full time then. Seven years later, this remains our weekend ritual. My mom in law comes over on the weekend and stays with us and hence we rarely go to her place now.

The current lockdown has put a spanner in the works for both her visit, and that of my mother's who was supposed to visit us in Mumbai this month. The two septuagenarians are managing by themselves rather gallantly. Staying put at home with no house help. No cakewalk indeed with getting supplies being a tough ask too.


A couple of day's back K took the recipe of the kharo papeto (literally translated as potatoes cooked with salt) from my mom in law and made it for us with a few deviations from the original recipe. It turned out to be delicious. I had it with dal and rice for dinner and, the next day, layered on toasted multigrain bread from the Village Shop for breakfast.  Both combinations were super.

Today she has made some more for friends who often send us food. I tasted a bit. Brilliant again.


In an earlier post I had written about how I cook 93 pc of the food at home these days. The thing about K is that when she does cook, she brings her characteristic hunger for perfection to the kitchen and knocks whatever she makes out of the park.

I got K to give me the kharo papeta recipe so that I could share it with you and here it is. Verbatim from Kainaz Karmakar, based on her mother Pervin Bilimoria's dish. 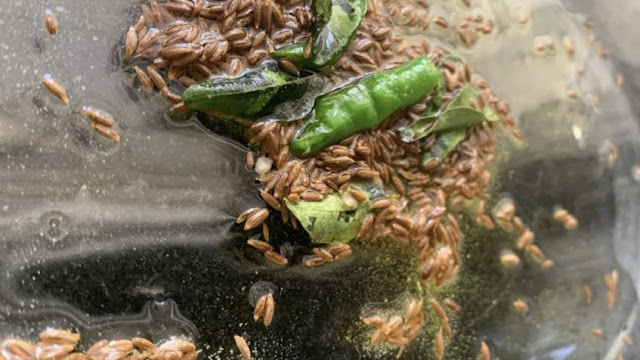 Heat a tablespoon of ghee for 20 Sec. Don’t feel shy. Ghee is our friend. Add 1 teaspoon whole jeera, curry leaves and green chillies. Add 1/4th tea spoon heeng powder. If you don’t have it, you don’t have it. Heat all this for 2 minutes. 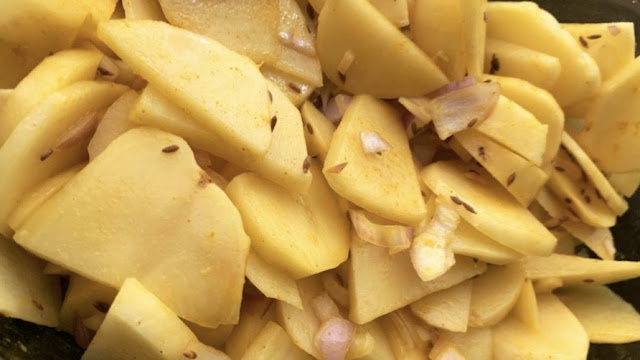 To the previously heated motley crew, add 4 sliced potatoes and one finely chopped onion (because who can chop more than one onion?!) Add 1 tea spoon turmeric, 1 inch finely chopped ginger (MOM IN LAW puts garlic instead: KK) and salt to taste. Mix mix mix. Add 100 ml water. Push it into the microwave and say a final good bye. You will not see them again for 6 minutes 30 seconds. When the micro beeps annoyingly, open it, give it a turn and back in for 6 minutes 30 seconds more. Do this one more time. 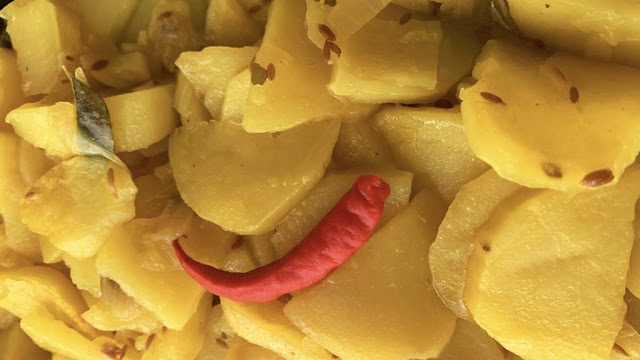 At the end, the dish should look like this, without any filters! Once it’s ready squeeze a little lime. This is my very lazy recipe, which results in, as my mama says, “A fairly edible dish.”

I went to Benzer Stores at Turner Road beside Tava this evening, as I had to buy oil and rice . There were a couple of people before me. All standing at fixed positions to maintain distances. This was at 7.30 pm. I was let in when my turn came. Got everything I needed including the rice and Nespresso. Unlike a store we had been to the previous night which had put a 50 per cent mark up (same as Amazon who weren't delivering in any case), there was no mark up on Nespresso here. The  new owner, who had taken over a few months back after the earlier owner had unfortunately passed away, was most warm and kind and friendly and even tempered. Such a ray of sunlight at a time where the behaviour of most other shop personnel border from brusque to edgy. Which is understandable given the pressure they are in and one doen not grudge them this but I was really touched by the gentleman at Benzer.

I earlier bought anda pav from the cyclist who comes to our lane and I must say that he is very cordial too.

One needs people like them at times like this. Hats off to them. It is thanks to them and other such local shop owners that we are surviving at the moment.
Bandra Covid -19 Journal family Microwave cooking Parsi Recipes vegetarian stuff

Cooking Girl said…
Loved the simplicity of this recipe and looking forward to trying it out soon. Question - any tips on how to cook this on the stovetop instead of the microwave?
13 April 2020 at 05:55

Kalyan Karmakar said…
@cookinggirl glad you liked it. They have always cooked it in the microwave. You can do the same process in a pan I guess and stir the potatoes occasionally. Do let me know
13 April 2020 at 13:02