Khichudi (khichdi). More an all weather friend for us Bengalis than just a monsoon thing. Covis Lockdown Journal 37

I decided to make khichuri (Bengali for khichdi) for lunch yesterday.

As is my practise these days, I took out more rice and dal than normal. The idea being to save time spent in the kitchen and utensils used too, by cooking meals that last for more than one occasion. I suddenly remembered a conversation that I had with Erika, one of our neighbours, earlier during the lockdown. She had said that she wondered whether the Bandra Durga Puja would happen this year given the lockdown. She is a Goan and not Bengali. Was born in Bandra and has been going to the puja for years.

"I would love to know how to make that khichuri if the puja does not happen as I love it," she said.

Remembering this, I added a bit more of rice and dal to the mix and then made the khichuri. Tight textured. Not runny. The way I like it. I had added carrots, peas and cauliflowers. I had planned to skip the traditional potatoes. I changed my mind at the last minute and added one as I had decided to make an extra portion for her.

Holy, but not so silent night


Erika and her daughter, Gia, had made red velvet cupcakes and brought them for a us a couple of nights back. Baby Loaf was feeling a bit out of sorts that night. They are very fond of Loaf. Despite the late hour and not having had dinner, they spent an hour coaxing and petting Loaf till he felt better. We had dinner after midnight that night but seeing Loaf feel a bit bit better and having the cupcakes, brought the life back into us.

Funnily enough, my mother had made khichuri in Kolkata the previous day. She called it 'diabetic friendly' as she had added bottle gourd, ivy gourd, banana stem, carrot and tomato. She had not added the potatoes which are paramount in a Bengali home khichuri. She took a picture of her plate and sent it to us. We spoke for a while on it on the phone. She said that she finally seems to have sorted out the amount of water to be added while cooking khichuri. I complimented her as this is a tricky one to crack!

I have started doing this myself too. Adding other vegetables instead of potatoes to the khichuri at home to make it a nutritious one dish meal.

Do you refer to this dish as 'humble khichudi/ khichdi', by any chance? Or 'sick-man's food?'

Well, we do not do so in Bengal!

The khichuri has every right not to be called 'humble.' It is quite revered in Kolkata. Especially the Durga Pujo Ashtami and the Saraswati Pujo bhog ones.

Khichudi gives a lot of joy back home in Kolkata and today it helped me connect with our Goan neighbours in my adopted home of Mumbai.


The humanity of food 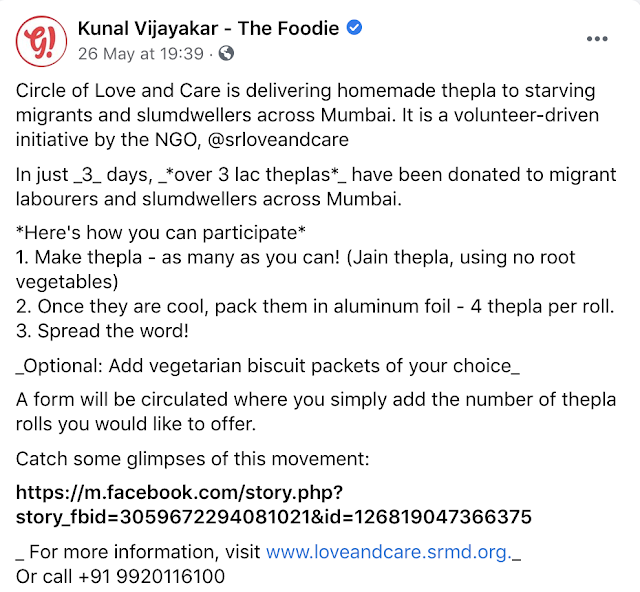 The satisfying taste of the hot khichuri today and an initiative called 'Circle of Love and Care' for helping migrants in Mumbai, that Kunal Vijayakar had posted about, took me back to an afternoon in Kolkata when I was in middle school. 1987 or 88.

It had rained heavily through the night and many were rendered homeless. The local para boys (youth from the neighbourhood) went from house to house carrying bed sheets in which they were collecting rice and dal and money. Each family contributed according to their capability. The quality and type of dal and rice varied from house to house, but became one when collected in the sheets.

The boys then went to the local football ground and made huge quantities of khichuri with the medley of rice and dals. They used the money collected to buy salt, oil and spices. Countless people who had lost their all stood patiently in the queue waiting to be fed.

There was a sense of dignity in how they conducted themselves. A sense of compassion and respect in the way the food was distributed. A display of humanity at its best.

My friends and I went to watch and help. We were much younger than the folks who had organised it. Seeing us, they gave us a plate of hot khichuri.

I remembered the warmth of that khichuri when I took a bite of the one I had made. More than three decades later. In a city at the other end of the country.

There was no social media back then to rally for help. No media support either as there was one TV channel, government run and with limited timings.

Yet, the boys in the hood stood up to be counted when needed. Boys who were otherwise looked down upon by our elders as those who were not serious about their studies. Whiling away their time in adda, carrom, football and cricket. Not 'role models'.

There were no mobile cameras then. Instagram or YouTube either, but the image of that day is still vivid in my memory.

Here's to all volunteers who have taken the initiative themselves to help out those in distress during the Covid Pandemic and the Cyclone Amphan. You are the real heroes.

All for one, one for all: Chef Sanjeev Kapoor

A funny coincidence happened just as I was going to step down to Erika's with the khichuri yesterday. I got a call from Sanjeev Kapoor. Yes, THE Sanjeev Kapoor. I smiled when I saw his name flash as he is the man associated with the move to deem khichdi the 'national dish of India' recently.

I have had the honour of meeting him a few times in the last five years or so and he has been most cordial and encouraging every time. This was the first time that he had called me though. Let me tell you why he had called.

I had written a post on food writing at the time of Covid. I don't know if you had read it, but he had.

I was not sure how people would react to it, but I had put a line there saying, 'Like local businesses, freelancers needs support too.'

Chef Sanjeev saw that it seems. He said that on reading it he decided to pick up the phone and call me. He said, 'times will be hard and we need to stand by each other in the food world rather than expect others to help us. I just wanted to tell you that if there is anything that you do where I could be of help to you then please reach out to me. Please tell that to your friends too.'

We spoke for some more time before and the chef shared his life experiences to encourage me and give direction and repeated his offer multiple times during the call.

I thought that this was supremely cool of him. That there was a lot to learn for me in this gesture of his.

A gesture that was as compassionate as a bowl of khichuri.

Very nicely written as always. Getting Khichadi/Khichuri pride of place is an act of nobility. Sharing food stories and food knowledge with ones who need it is no less than as sharing the food itself.

My offers stands and has no expiry date :)

I will stand with the food fraternity forever.

Kalyan Karmakar said…
@sanjeev I was most touched by your call and inspired too. Really appreciated the genuine gesture of compassion. Was doubly thrilled by your leaving this lovely comment. I learnt a lesson on humility in this. Thank you very much,