What next for freelance food writers in the time of the Covid lockdown? And what happens when you support restaurants? Covid Lockdown Journal 36.

"Our delivery staff is waiting patiently and we are very much open. Most of our kitchen staff has left the city though. Which is why we are not making rotis or accepting orders on apps for the same. Tandoori rotis that is. We are making rumali rotis still. All by ourselves as there is no staff. We will make aata tava parathas from this evening. On the plus side, we are getting a better quality of chicken than at the start of the lockdown. Smaller birds."

This was Hardeep Chadha of Khaane Khas, one of our favourite restaurants in Mumbai. We had a very busy morning today with no time to make lunch and had hence placed an order with them through an app. The order had not registered as we realised later. I tried calling the restaurant, no one picked up and then I called Hardeep directly.

I smiled when I heard what he had to say. Hardeep had once told me about how in the early days of his stint as a chef at the Taj President, when just out of hospitality management school, he had got the roti master chefs at the kitchen to teach him how to make rumali rotis. After all these years, Hardeep still rolls up his sleeves and makes rotis for the langaar at the local gurudwara on Sundays I believe.


Hardeep took our order and sent the food. Shahi paneer, our recent favourite, of which I kept some of the gravy aside to make a 'shahi chicken' with later. A rumali roti and for the evening a rumali roti chicken tikka roll (it was excellent by the way). I prepared a plate for K as she ends up having most of her breakfasts and lunches while on work calls these days. I feel grateful that we get to at least be in the same room while we dine in this working from home chapter in her life.

I checked my Facebook page after lunch and saw that Kunal Vijayakar had responded to my post about Candies opening for business again which I had written yesterday. He wanted to know if he could place an order there and pick it up. I gave him the numbers of Candies, as I had no idea to be honest. I do know that he is a fellow Candies fan apart from being THE ultimate foodie.

The same post which had someone from a restricted account on Instagram comment on my post saying, "you are privileged, sir." I blocked her. As I blocked the gentleman, who works in the uber luxury hospitality space and who had left a comment saying 'ostentatious' on Facebook when I posted a picture of the food sent by Soam when they had re-opened for business. Incidentally we had the Soam food over 4,5 occasions as we had the Oh! Calcutta food earlier which had raised similar comments from 'restricted accounts,' about whose lives or what they do, one knows nothing. Trolls as one calls then and glass houses and soap boxes can be rather flimsy and are not wasting ones sleep over.

I am sure that people who made such comments has their reasons to do so and I do not want to dissect them here!

Let me instead tell you about why I have spoken about the places we have ordered food from during the Lockdown ... be it local businesses such as Khaane Khas, Candies, Seefah, Punjab Sweets, La Folie, the Baker's Dozen, Soam, Lucky, The Village Shop. Or bigger ones such as Smoke House Deli or Oh! Calcutta.

Or about individuals such as James Mirinda and his excellent roast chicken, Anurita Ghoshal and her divine cakes at Eighth  and Marina Balkrishnan and her Ootupura Keralite meals. Or neighbourhood shops such as Abba Broilers for buying chicken of Joseph's for mutton and most recently, Abdul Rahim of Junta mutton shop, who came all the way from Worli to Bandra to sell mutton so that he could feed his family on Eid.


I talk about all these local businesses, whose products I have tried and liked, so that they get a boost and like Kunal, there are many who then reach out to them and subscribe to their services. It is important that restaurants and eateries open again and do well.

When businesses do well, employees get paid and looked after. Soam and Snack Shack (Bandra) for example, provide living quarters to those working during Covid. There are others too I am sure. Many restaurant employees...cooks, helpers, cleaners, delivery folks.. are not from affluent backgrounds. Many are migrants. Some daily wage earners. They and their families would be left helpless without the income that comes when restaurants run. As would be many delivery folks, suppliers, farmers etc. It is not fair to expect entrepreneurs to be able to sustain their staff for long if business is shut and the government does not help. Which is why we insist on paying for all the food we order unless someone really insists otherwise and we try not to encourage that. Fair trade was never more important than now.

India is not a country which can provide for the welfare of all its citizens. Nor can charity look after all. The more people get a chance to be work and look after themselves, more those funds can be diverted to those who can't.

That is what happens when one supports local businesses. Food or otherwise.

That is what I have tried to do through my #FoodocracyIndia series too where I talk about landmark eateries...street food, family run, hole in the walls...for these are places where India eat. Not all restaurant dining is about lifestyle and indulgence. Restaurants originally existed because people needed a place where they could quell hunger and at a price they could afford.

I have now started #FoodocracyForHer to bring out the inspiring stories of women entrepreneurs in the F&B space for inspiration is what we all need now!!!

Perhaps it is because I am a freelancer myself that I empathise more with the small business folks or lone entrepreneurs. Or perhaps because I am Bengali and we are a supposed to have a socialist streak in our DNA (just kidding). Or perhaps because Buddhism teaches me to try to bring hope and joy into the life of individuals based on compassion and respect. I really don't know!

I like to focus on everyday food and in our own life currently it is a lot about cooking food at home using simple recipes, cleaning up the kitchen after that, not wasting any leftovers, using more vegetables than we ever did before and using local, non-expensive brands where one can.

I talk about this in the content I create and there are many who have written in saying they have used these recipes or like my kitchen cleaning tips. I feel happy to hear that.

I tag brands whose products or services I buy and use. I feel that everyone could do with a fillip during these days, but if a big corp brand or their agency approaches me for promotion, I tell them that I am happy to engage with them professionally in it.

They do pay their ad, PR, consulting and social media agencies, ad film makers, photographer, designers, models, chef,  etc after all. Why not content creators?

If I were to work for free, I would rather focus on creating content for my own channels based on my own vision than do it for a commercial entity. Thankfully, I have had the good fortune of working with folks who respect the sentiment and I appreciate that

Everyone is trying their best in trying circumstances. Yes, one is more fortunate than countless others and of course one can do better. And one will try to do so. It is best to focus on that than to point fingers at others. The former is more effective and soul satisfying.

That's all. Thank you. 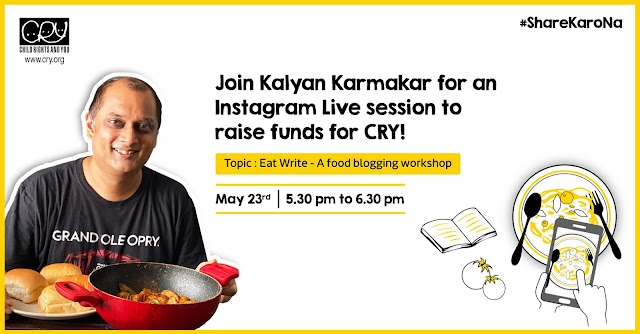 Shaswati said…
Lovely read as always. I really appreciate your Foodocrasy initiatives. Most people on social media like to talk about the fancy places and fancy food and often forget or neglect the basic soul satisfying outlets and the challenges they face.Keep creating these adorable contents and absolutely ignore those nay sayers.
29 May 2020 at 17:40

Kalyan Karmakar said…
@shaswati thanks for reading, listening, being so supportive and for sending maachh, mangsho, ruti
31 May 2020 at 13:50