How #LoveYourLeftovers became my Lockdown anthem


I had a dream this morning and it played out rather well on our breakfast plates.

Come to think of it, all our meals at home for the past few days featured leftovers from the fridge which I repurposed in the kitchen, and they all turned out to be rather spectacular.

Don't trust me? Ask K about it!

Take lunch yesterday for example. I use the leftover jus that came with the spinach and cheese lamb roulade sent by the Trident BKC on Sunday, roasted chicken legs in it in the oven along with some sliced potatoes and carrot strips.

Turned out to be as nice and hearty a meal as I imagined it would be.


What was truly epiphanic though was the lunch I made the previous day. The folks at the Trident BKC had added an orange emulsion to go with the excellent almond and coriander crusted John Dory that they had sent. I had a feeling that it would go well with offal. I took out the chicken liver (Zorabian again), that Kainaz had ordered and kept in the freezer. I thawed this and tossed it in a pan with sliced onions, green capsicum (we always have capsicum with liver at home!) salt and pepper in olive oil.

I added a bit of the orange emulsion to the sauteed chicken liver at the end before turning off the gas. Any longer and it would get burnt and bitter. I drizzled in a bit more of the orange emulsion on the plate before serving it to K who was on a work call and before I sat down to eat. We mopped it up with the last of their sourdough bread, which I toasted in the griller with a bit of extra virgin olive oil. It was heaven and made Kainaz, the liver lover in the house, stop in her tracks and mouth, 'loved it,' while on the call.

How cool is that?!


All this is too poncy for you? Evoked the name of a five star hotel too much in one post?  Well, let me then tell you about the rustic glory of our breakfasts of the last couple of days.


Yesterday I made egg rolls for breakfast with parathas sent by our friends the Grovers a few nights back. A part of what I jokinjgly refer to as the 'Grover Paratha Express.'  They had sent lovely chhole with it and sirke wali peya.z Onions spiked with lime juice and masalas.

I had frozen some of the parathas after dinner and thawed those yesterday and made egg rolls with them. I added some of the sirke wali piyaz along with sauteed onions and capsicum.

It made K once again look up from her work call and mouth, 'loved it.'

I had gone gloriously desi for breakfast that morning. I made what my late thakurma (paternal grandmother) had introduced me to as 'deemer poach' in Kolkata in 1980 when we had just moved into India. Fried eggs in English. 'Half fry' in Mumbai's Irani cafes.

I made it in mustard oil the Bengali way. Sprinkled crushed black pepper on it. Some of the pink salt that a local conference delegate in an advertising festival in Kathmandu had given K along with some other local food treats a while back. I added some of the sirke wali piyaz too and, to give company to this Punjabi dhaba favourite, some of the Gujarati hara (green coriander, chilli and coconut) chutney that Soam had sent along with the handvo a day or two back.

The combination turned out to be a flavour festival and I even poured out my espresso in a cutting chai glass to complete the mood.

The aromas of the sirke wale onions took me back to Dhakuria in Kolkata in 1981. To an evening when my mother had bought me my first egg roll from the egg roll cart at the street corner. It was the beginning of a lifelong love affair between me and this Kolkata street food favourite.

The spices in Anu's sirke wali peyaz, toasted jeera (cumin) dominated I suspect, reminded me of the spices in the roll. That roll had cubed potatoes too. Something I rarely found in the egg rolls in my life later. My egg rolls made with Anu's aata parathas (versus the maida parathas of Kolkata) yesterday, had sliced capsicum. Something I first experienced at Hot Kati Rolls at Kolkata's Park Street, which I used to frequent when I was in high school and then in college in the mid 1990s.

The flavours that nostalgia gets to food are truly amazing. 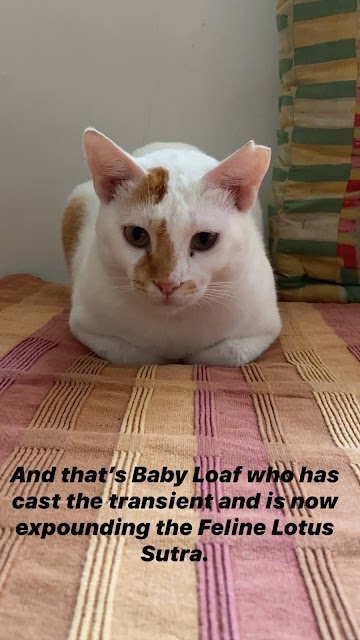 Of the many lessons that I have learnt in the kitchen during the lockdown, that of frugality would be right at top. For some, frugality means repurposing and cooking with vegetable peels as our ancestors did.

For us, it has been cooking with fewer ingredients. Having meals with fewer dishes. Cooking in a way that the food cooked extends over many meals.

And, learning to 'love our leftovers.' I even created a hashtag for that. The meals that I told you about in this post are an example of the amount of fun one has in the kitchen these days, repurposing what's left over in the fridge in creative ways.

Leading to meals that give unbridled joy.

I was not always like this I admit. Ever since we ran our own kitchen post marriage, I tried to ensure that we ate fresh food. Cooking in a manner that the food did not extend beyond a meal. Giving away the odd extra dish that might remain. Rolling my eyes up when my mother or my mother in law visited and would carefully store their leftovers in the fridge, to heat and eat later. They were both working women and understood the value of this.

I was a bit spoilt I admit. I would like to think that I have grown up a bit during the lockdown!


Write to me in the comments if you have begun using leftovers more during the lockdown and have done so in a creative way. I would love to hear your stories.

1. Favourite parts of the lockdown
2. Notes from our lockdown kitchen
3. Freelancing during the lockdown
4. The Bengali deemer poach
5. Story of our first kitchen