Cats got your heart. The wisdom of a hearty breakfast.


I woke up this morning to see Baby Loaf lying in the easy chair by our bed. This is his favoured spot these days. He naps there during the day too. I see him snoozing over there when I get up from an afternoon nap. Actual 'catnaps' evidently last a lot longer than mine!

I remembered going to sleep last night and seeing Baby Loaf settling on my slippers for a bit before he left the room. He had come into the room earlier, got onto our bed, saw the pyjamas which I was going to wear lying there, got onto it and began making this strange movement which to me looks like a cross between a reverse Michael Jackson Moonwalk and Carl lewis taking off in a 100 metre sprint. Or running on a treadmill!

I posted a video of him doing something similar on our quilt, a few days back on Instagram, and people wrote in to me saying that this is called 'kneading'. Apparently cats do this to recreate memories of their being nursed by their mums. Some people said this is a cat's way of saying that you are their parent now.

I liked this explanation the best and must remember to tell this to Kainaz the next time Loaf does this on freshly laundered clothes much to her chagrin.

It is not that Baby Loaf is always lovey dovey. Last evening in between his kneading and then lying on my sandals, he went to the door and meowed to be let out.

Or take what happened this morning when I woke to feed him at around 6.30 am. Loaf snuggled up to me and I tickled him below his neck. He followed me as I took the cat food out and then fed him. Then he went to the door and meowed to go out. You do remember that he got beaten up by the cats downstairs the last time we let him out.

He then came back to the bedroom and got on the bed and touched his nose to Kainaz's nose while she slept. I went back to sleep and, as I said, woke up seeing him on the easy chair.

Now let me tell you about the profound realisation dawned on me when I woke up today and saw him lying on the chair in the room and I reflected on what I just described.

No, I am not talking about the realisation that regular commercial button mushrooms and processed cheese can make for a fabulous omelette stuffing, as I told Baby Loaf when he came to the kitchen to see me make my breakfast today.

It was realisation that everything that I had thought about cats before I met Baby Loaf, every preconceived notion that I had, was proved wrong once he came into my life.


I used to think that cats were cold and distant, unlike dogs whom I always loved. That their loyalty was to their place of shelter, to their food, not to people. That they don't like to be petted or loved, that they preferred to stay aloof.

Then came the fateful day last November when Baby Loaf and I bumped into each other at our lobby and he came and nuzzled his cheek on my sandal. Later people told me that this is how cats stake their claim on you.

If he was a dog or a puppy, I would have patted him. I did not know what to do with a cat.

This happened over a few days till I finally had the gumption to pat him. I had never done this with a cat before this and was a bit tentative about it.

I did pat him eventually and it was such a wonderful feeling. I rushed up home and excitedly told K, "I patted a cat for the first time in my life and it felt fabulous."

You know how this story progressed.


There was more to my 'profound realisation?'

Well, if I could be so wrong in my preconceived notions about cats, then how valid are the notions that we hold in our head about other human beings? People from other classes, communities, cultures, countries, genders? People who are different from us? 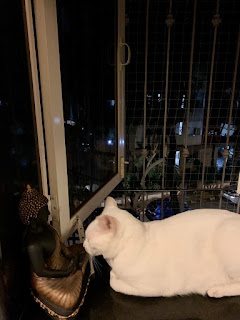 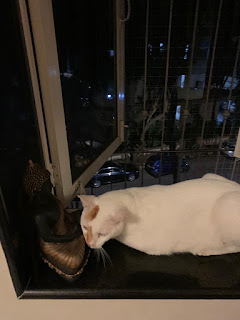 Sanjay N Lulla said…
Wow this write up is a treat with mushrooms thrown in too 😄. Cats usually leave their smell on hoomans and their clothes stating that this hooman belongs to me.
I am allergic to animals and am asthmatic so I don't keep cats home but give all my love to the strays. It is reciprocated many folds. Their smell on you is a marking to other animals that this hooman is trust worthy and loving.
9 July 2020 at 15:13

Kalyan Karmakar said…
@SanjayNLulla it is so wonderful that despite the allergy you shower your love on strays. What you wrote about Baby Loaf's endorsement made me feel special
9 July 2020 at 21:08