"He has just come in and he is covered in mud. He was waiting outside the door and meowed on seeing me and ran away and up the stairs. I told him come in, this is your house. Then he came. I could not recognise him at first though. Thought he was some rowdy cat. Then heard his voice and realised that it was our Baby Loaf."

That is how Kainaz woke me today and I spent the next hour or so, sitting cross legged on the floor. Trying to clean Baby Loaf with wipes and then towelling him dry. Moving from place to place when he wiggled out and settled a few inches away from me after each session. I patted him first of course then gave him some food before I began 'operation clean up.'

He went out last night after insisting that we let him out and then went out of sight even though we both went out to check on him through the night.


Later I learnt from Ajay, our watchman for whom we have made sandwiches of myriad fillings in the evenings through the lockdown, that Loaf was being attacked by two 'outside cats' in the morning when Ajay spotted them and chased off the intruders with a pole before Baby Loaf scampered up. That is when he must have come up. Ajay is from UP and recounted the story with for more panache and spice than I just did for you. 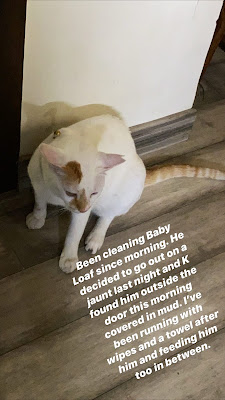 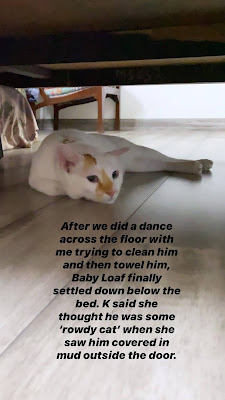 While writing this piece, I heard K proudly tell someone on the phone, "he is a house cat and the two were street cats, but I am sure he gave it back." 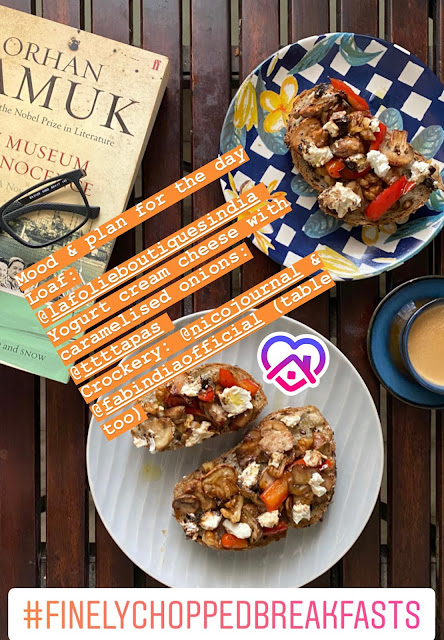 I was feeling washed out at the end of it, though relieved that Loaf was back.

For a moment I wished that K and I could have just headed off to one of our favourite neighbourhood cafes for breakfast after the hectic morning. Unwinding over chicken sandwiches and cappuccinos at Candies, cheese chilli eggs ('everything separate') and cappuccinos at La Folie, or scrambled eggs (runny) and eggs Benedict and coffee at Salt Water Cafe.

If I was alone and if K was at work, then I would have headed out with a book. I have just begun reading Pamuk's 'Museum of Innocence.' A rather heavy tome and I wonder which will get over first. The book? Or the pandemic? I am not 16 anymore! Be it Iris Murdoch, D H Lawrence or Somerset Maugham, I used to knock them off with elan back then.

Things are different now. I planned to spend the day shutting myself from the world and reading the book. I did not get to even lift it after I took the picture. The day just passed in a blur!

Alas, the breakfasts I spoke ulof were part of the ‘old normal’. The pre-lockdown era. Cafes are still shut of course. Barring takeaways.

I shaved and showered and headed to the kitchen instead. Sliced the sourdough loaf we had called for from La Folie, via Koinonia Coffee. Sauteed button mushrooms and red capsicum in extra virgin avocado oil with a bit of pink salt and black pepper sprinkled on.

People often ask me how come my mushrooms turn out so well and not soggy. Well, this is what I have learnt after 20 years of trial and error. Wash the mushrooms under running water if at all, then wipe them. Do not soak them in water to clean. Do not overcrowd the pan with mushrooms. Slice thin if you can. I am talking of button mushrooms here. Cook on a high heat. Stir and press them down to the pan with a spatula as you cook. Aim for a slight char.


I toasted slices of sourdough in the grill as I slice them too thick for the toaster.
I put the mushrooms and bell pepper on the toast. I added in bits of the yogurt based cream cheese that Shilpa Gupta had given me as a part of a sample of her work to try. She is an interior designer who is making healthy vegetarian western treats from her home kitchen post the lockdown.
I drizzled some extra virgin olive oil at the end and gave a plate to K who was on a work call by then, and settled down for mine with an espresso on the side.

I took a bite and smiled. Sanjana Patel, the owner of La Folie, would approve, I told myself.

The 'old normal' was not always about our breakfast outings.

Our weekend Bandra cafe breakfast ritual in Bandra started a few years into our marriage. With the waffles and cappuccino combo offer, at the now shut JATC, that we used to head to look homing pigeons.

A couple of Sundays back I made a breakfast that reminded me of the time just before our marriage when I had moved into the apartment that we had rented. K moved in a bit later once we got married.

I had made fried eggs and toast that Sunday and fried some ham on the side. Chicken though. From Zorabian chicken. Still, rather nice even though not pork.

It had been a while since I had made this combination for breakfast. I used to do so in those early 'bachelor kitchen' days. We did not have a gas connection yet and my (then to be) mom in law had given me an electronic stove and and a toaster. I use to fry an egg and some cold cuts on a pan on the stove and make toast too, while dressing up from work and then wolfed it down at home before leaving.

Thanks to the lessons given to me by my mother when I was a kid, breakfast has always been important to me. I can never start the day on an empty stomach.

I smiled as the memories of those early breakfasts came back with each bite that I took. It was as if we had gone back to the beginning thanks to the lockdown.

That was also the Sunday when my Times Kitchen Tales articles started coming out in the Times of India again. There were two columns left for the season, when the lockdown started and print distribution stopped and the programme was halted.

It resumed with newspapers coming home again and the finale for the season was last Sunday.

I know that I will miss making breakfast at home every morning and serving it to K, when Both working from home and the lockdown get over.

These breakfasts will remain a precious memories of these times. 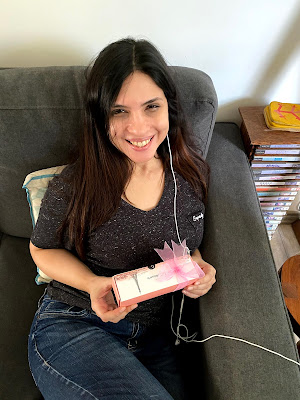 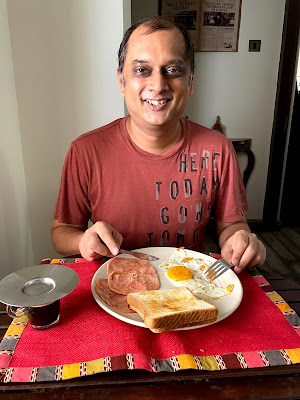 Talking of the 'old normal,' Pooja Dhingra's Le 15 Patisserie has just opened for delivery again after closing down earlier. The first thing that I did was to order 6 dark chocolate macarons for K. Her favourite dessert ever. Handed it to her while she was on a work call and she squealed with joy!!

Here's wishing all who are making fresh starts, all the very best! 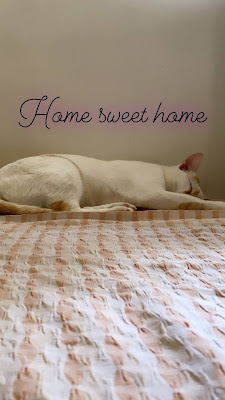 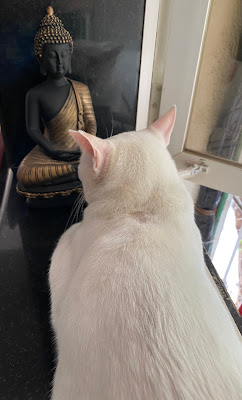 Baby Loaf is much loved and I feel overwhelmed by the messages you send him. Here are a few:

Link to the chat between Roshan Abbas, Shormishta Mukherjee and me on Times Kitchen Tales on how the kitchen became the centre of our lives during the lockdown.
Breakfasts Covid -19 Journal mumbai Mumbai restaurants